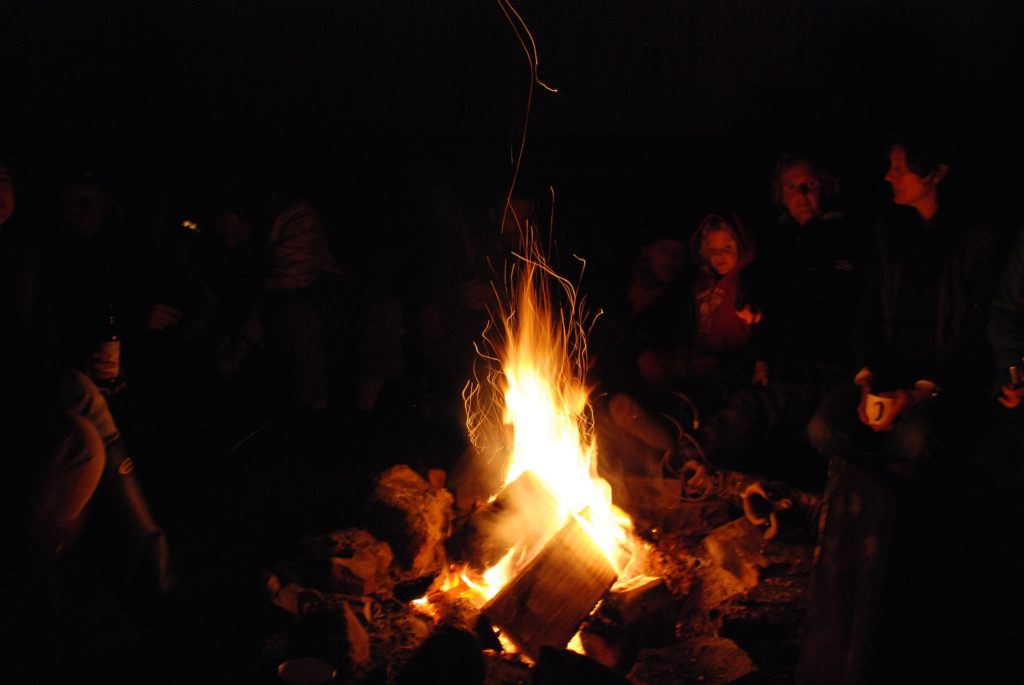 Photograph by Miki Zea
Dougie Strang
is a writer, performer, and storyteller. He sits on the Dark Mountain Steering Group and has co-created and directed many of Dark Mountain’s on site performances, including Liminal (at Uncivilisation Festival) and The Night Breathes Us In (Festival of the Dark, Reading). He lives in South West Scotland by the River Ae.
Share
It’s Saturday morning in a marquee at Unciv 2013. Margaret Elphinstone is reading from her novel The Gathering Night. The book is a vivid imagining of life during the Mesolithic period and it follows the fate of the Auk People, hunter-gatherers who inhabit the coast and islands of what is now Argyll. In the discussion that follows, we talk about the longing many feel for a life that is more ‘natural’, more instinctive, more connected to the rhythm of the seasons. It’s a deep longing, but we mostly agree that there’s no way back to the animist culture and lifestyle of the Auk People.

Later that day, or rather, in the early hours of the next morning, I’m lying on my back in the mud and straw, amidst a huddle of bodies, beneath a parachute strung amongst trees. I’m sober, have taken no hallucinogens, and yet I’ve spent the last few hours in a superbly altered state.

It might have been sparked by the fire ritual, conducted by folk from Mearcstapa and the Telling, but really it was collectively manifested: it emerged from the space and the night and all the people gathered at the Parachute Stage. It was a solo hum that became a chorus, that became shrieking and animal howling, that became, finally, wild chants and leaping dancers. There was no conductor, no choreography, it all just happened and fitted. It was instinctive and extraordinary.

A couple of months later I spent a week walking in the woods in and around Glen Affric in the Scottish Highlands. Glen Affric is one of the oldest ecosystem restoration projects in the UK. It’s also one of the most nourishing places I’ve ever been.

Pinus Sylvestris, the Scots Pine, is to northern glens what the English Oak is to the valleys of the south. Both fit well their ecological niche, and both have an iconic role in our culture and our deep sense of place. Walking in an expanse of either is to be transported; and, whilst it may well be a long way back to the Mesolithic, the woods of Glen Affric give you a sense of how the land might have looked to the Auk People of The Gathering Night. There’s nothing like the fauna of course, the lynx and bear and wild boar, the wolves. But it’s the kind of place where you’d expect such creatures to be and, being there yourself, it’s very easy to imagine their return.

This idea of ‘rewilding’, both of the land and the self, has become increasingly popular amongst writers and thinkers associated with the environment (see this previous DM blog post in which George Monbiot discusses his new book Feral). It’s also one of the threads woven into the Dark Mountain Project. The idea of Uncivilised writing is very much a kind of creative rewilding, and whilst I can only speak for myself, the Uncivilisation festivals have seemed like staging posts on a route – I won’t say forwards. Each year I feel as though I’ve been unpacked and ruffled through. I’ve left feeling leaner and a bit more raggedy. I don’t think I’m alone in this.

Last year was the last Unciv, at least in the form it has taken so far. After four years, the organisers are taking a break and focusing their energy on other aspects of the project. However, if this leaves a large Unciv-sized gap in your life then fear not, there are other Dark Mountain happenings afoot – local groups continue to meet and plan events, and there are rumours of another Telling, this time in Sheffield. There’s also Carrying the Fire.

Now in its third year, Carrying the Fire is similar to Unciv in that it provides a rich mix of talks, workshops and performances. It also fosters the same kinds of meetings and conversations, the same magic that happens when you gather people round a fire under the stars.

This year’s programme will delve into some of those ideas behind rewilding, exploring the links between large-scale wilderness restoration and our own need for wildness in our lives. To help with the delving, there will be talks from the likes of Alan Watson Featherstone, founder of Trees for Life (the project which has helped plant over a million trees in Glen Affric and adjacent glens) and Kate Rawles, director of Outdoor Philosophy and author of The Carbon Cycle; there will also be live art and performances from, amongst others, the amazing Feral Theatre; and there will be creative workshops with the likes of Margaret Elphinstone and Cumbrian poet Kim Moore.

The full programme is being finalised – we have some very exciting guests, musical and otherwise, soon to be announced – and tickets are now on sale. Come join us for what promises to be a very fine gathering round the hearth. There’s even another parachute, strung amongst the trees in the woods at Wiston, though there’s no accounting for what might happen beneath it!

Carrying the Fire takes place at Wiston Lodge in the Scottish Borders over the weekend of 16th-18th May. Collection and drop-off will be available at Lockerbie mainline train station. Discounted tickets for early birds are on sale now. For more details and updates, go to the Carrying the Fire website: carryingthefire.co.uk