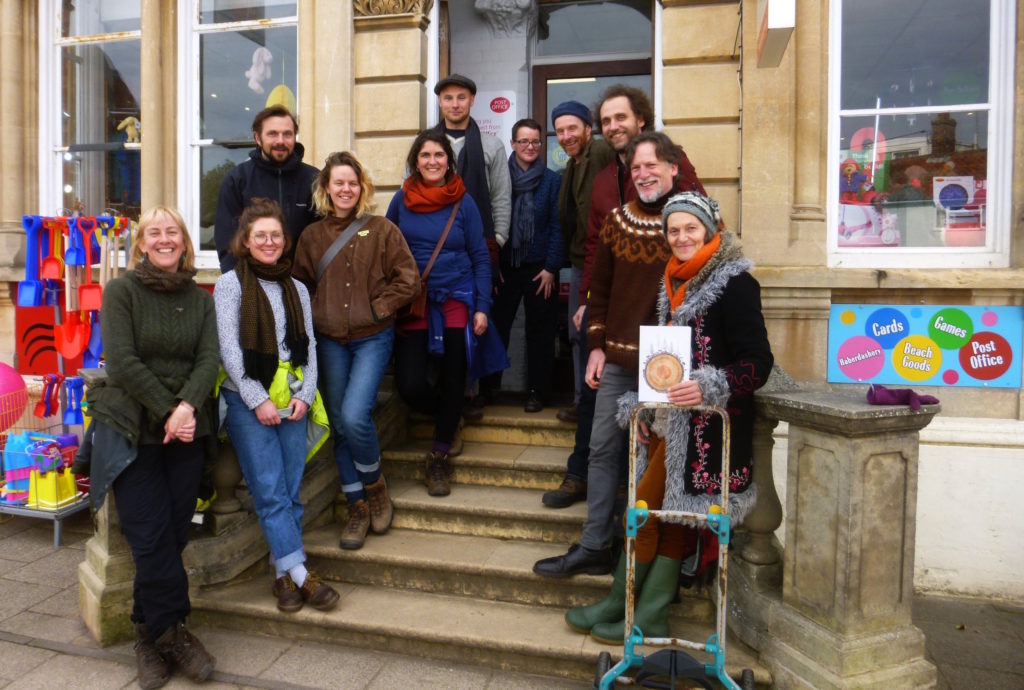 The Dark Mountain Steerers and friends of the project on the steps of Southwold Post Office, April 2018.
The Editors
Share

The village of Reydon lies in the flatlands of East Anglia. Surrounded by agri-prairies, wavy reed beds and the old North Sea, this is big sky country, a landscape without even the thought of a mountain. Yet it is here, in a cottage down a lane at the edge of the village, that every Dark Mountain book begins its journey out into the world.

And it was here that we gathered in April – the seven Steerers, who share the long-term responsibility for Dark Mountain as a project, and six guests, editors and artists with whom we have worked closely – for the annual meeting where we reflect on our work, look ahead together and ask whether it is time to bring the project to a close. So far, the answer has always been no, but it feels like an important question to return to as part of the yearly cycle.

At one stage, it looked like we would be ready to launch this new online home for Dark Mountain while we were there in Suffolk – and there would have been something satisfying about being together for that moment. A great deal of work has gone into the making of this website, supported by a great deal of generosity from those to whom the work of this project matters.

It’s probably truer to the experience of running Dark Mountain, though, that we reach this milestone with our team scattered across different countries, one of us just returned from teaching a course on Writing To Make Change Happen, another about to leave for the boat to Lithuania and a Midsummer symposium on Rites and Terrabytes. One of the things we hope to do with this new site is to share more of the fertile tangle of activity that goes on around and about Dark Mountain, and to offer more ways into that tangle.

What we are launching today is not a finished site – there is no such thing, we’ve learned, over the year that we’ve spent working on this. Rather, it’s a structure on which Dark Mountain can build, as we approach the second decade of this project.

Almost eighteen months ago, when we launched the campaign that funded the creation of this site, Dougald wrote:

It’s time to do something online that comes closer to the richness of the books we publish (and will go on publishing). Exactly what form this takes, we’re still working on – but it’s going to be an online publication, something more and different to a blog – and a site that reflects more of the web of activity of the writers, thinkers, artists, musicians, makers and doers who have taken up the challenges of the Dark Mountain manifesto.

That vision came into focus over the months that followed, as we heard from readers who offered support and advice and generous donations to help us realise it – and it was refined further over the autumn, in workshops with the team at Pragmatic, the Brighton-based agency who have worked with us to build the site. Now we have brought it far enough along the journey from dreams to responsibilities that we have something to share with you.

We hope you agree that the new site goes a long way to match the beauty and richness of the books that we publish, to tell the stories of this project and to share more of the work of those who have got involved with it over the years. As you begin exploring, here are a few things to which we would direct your attention:

There is plenty more to discover as you begin to explore – not least, the hundreds of essays, stories, conversations and poems that had been buried in the archives of our earlier sites and can now be discovered more easily. Other aspects of the new site will come into focus over the months ahead, as we start putting it to use.

In particular, we will return to one of the themes that emerged strongly in the response to our fundraising campaign: the desire to find and connect with other Dark Mountain readers. We spent a lot of time looking at technological methods for supporting this, before coming around to the realisation that more technology might not be what is needed. Instead, this autumn, we’ll be using this site to share stories of local meet-ups and projects inspired by Dark Mountain, sharing what those involved have learned and offering some simple ways that we can help those of you who would like to start something in the places where you live.

Something else that’s come out of this process is a deep sense of how much we owe to our readers and supporters. It was your generosity that made it possible for us to invest in building this site – and along the way, as we made decisions, we’ve felt the responsibility of doing justice to the faith you put in us. We want to acknowledge that by letting you in on more of the thinking that goes on behind the scenes at Dark Mountain, so look out for more posts in which we take you through the way we operate and how we make decisions. (As a small start towards that, check out the new page we’ve created on Dark Mountain as an organisation.)

In the spirit of openness, we should say that we’ve taken the launch of the new site as a moment to raise the price of a basic subscription to Dark Mountain for the first time in five years. So new subscribers will now pay £32 a year for two books in the UK, £38 in the rest of Europe, and £45 in the USA, Canada and elsewhere – but if you’re an existing subscriber, you’ll go on paying the old rates for as long as your subscription keeps renewing. (You might also notice that we’ve raised the price of an issue in our shop by £1, but we’ve got rid of the £1 per item packing charge we used to add, so those changes cancel each other out.)

It’s been a long journey since we first made the call for support to create a new online home for this project. We hope that you’ll be as happy as we are with where we’ve got to. There will be loose ends and things that don’t quite work yet – so please, if you spot anything that doesn’t work or doesn’t look right, let us know.

The Digital Back Catalogue: Issues 1 to 14 (PDF)

A complete collection of Issues 1 to 14 of Dark Mountain in PDF format.