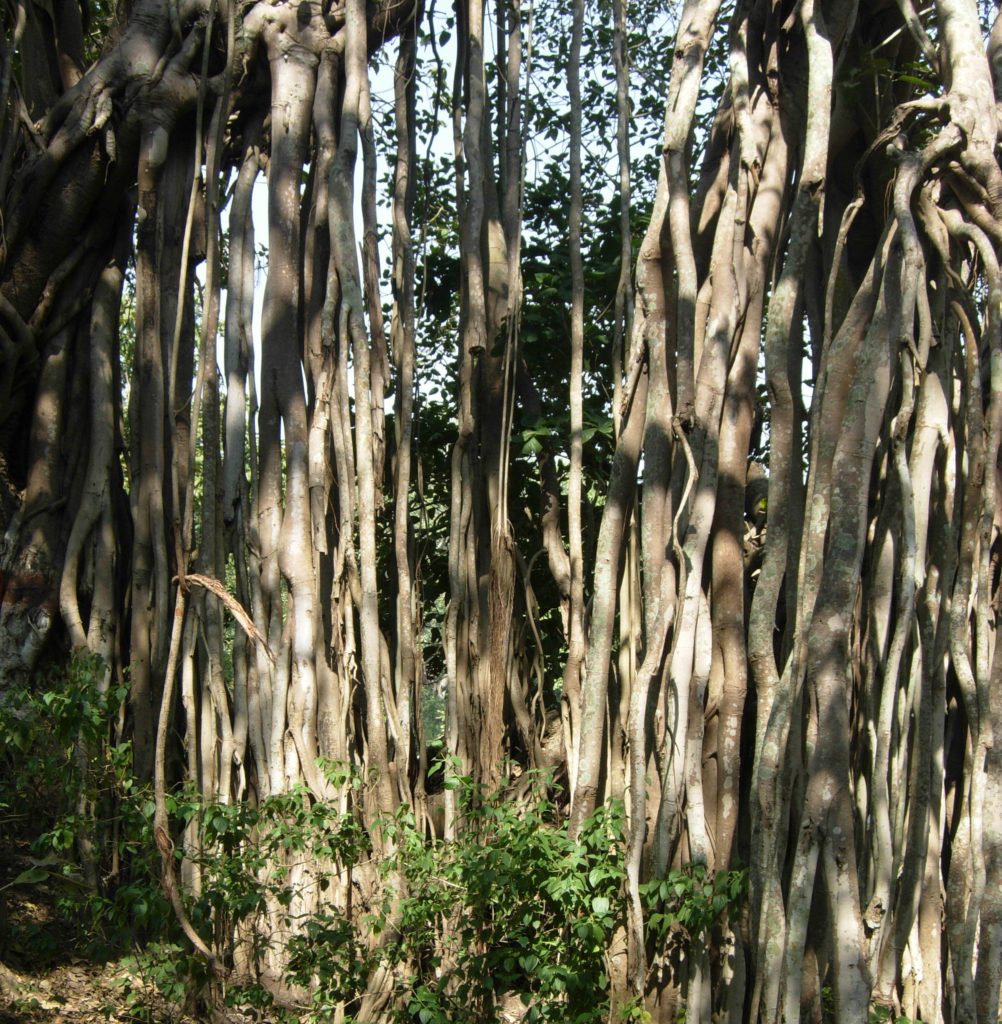 Anciemt ways
Narendra
Narendra's association with the indigenous communities of the Abujhmad region of Bastar, Central India, goes back over 30 years. His dispatches are published as an occasional series on Dark Mountain.
Share
I had been in Abujhmad for about a year, when a senior friend arrived from Delhi to stay. We were returning to Sonepur after a long and gruelling walk from Ehnar. Like other places deep in the interiors, Ehnar could hardly be called a village in the usual sense. Made up of no more than two or three widely scattered huts, they merge into the interminable vegetation making it very difficult to distinguish one from the other. As is the case with human beings, their outlines, colours and postures echo those of the surrounding bushes, anthills, boulders, trees and vines. This lends a strangeness, if not an eeriness and mysteriousness too, to the region. I often wished that evening never come, for night follows unfailingly with another kind of strangeness and magnitude.

We reached Sonepur just before sunset. The swirling dark had begun descending slowly, bringing those unusual shadows in its wake. The caretaker of the Forest Rest House was missing, along with the keys. This was understandable as hardly any officials ever visited, sometimes for years on end. We took shelter in the Department’s hut a little distance from the Rest House on the periphery of the village. I had seen it several times while walking to Garpa. There were a couple of other Department huts, in similar states of disuse. Like other huts, these too had both doors and door frames, unlike the Abujhmadia’s, who felt no need for the two together. 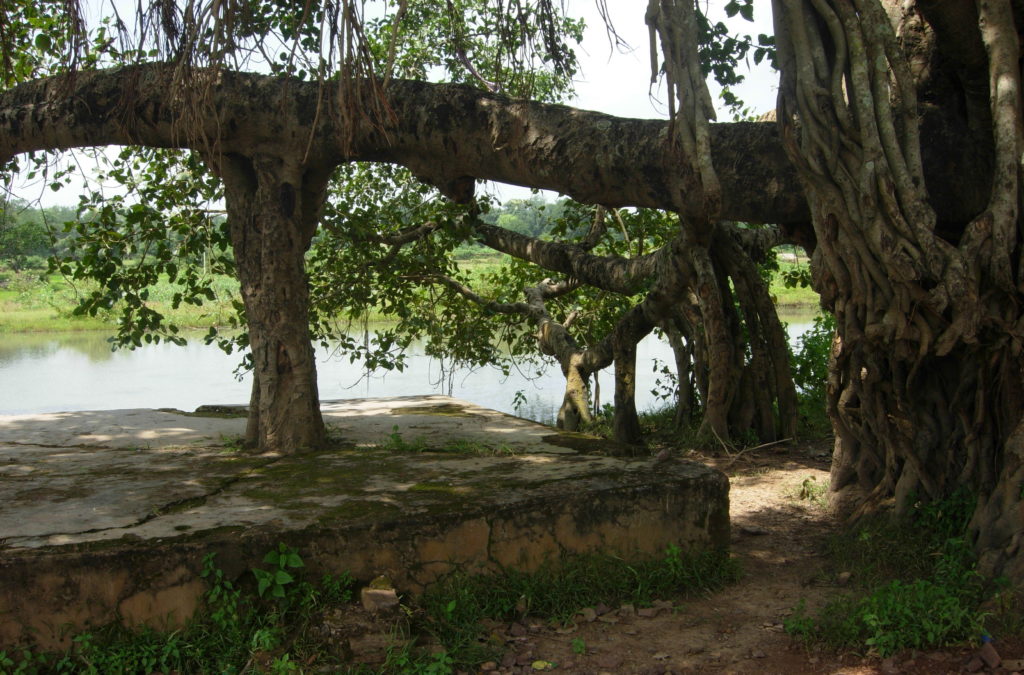 The hut had been long since abandoned, but it was still in a reasonable condition. Like other huts in Sonepur it had mud walls and was roofed with country tiles. Two wooden beds stood inside, a little termite-eaten but still useable after some dusting. The doors, windows and beams were festooned with spider webs of every shape and size. Tired as we were, we cleared only some. Apart from the main door there was one at the back, opening onto the wild forest. It was tightly fastened, so we did not open it to look out back. The front door would not close fully as the chain fell a little short of the hook, so I tied the two together using a string from the bag. There were two windows closed with wooden planks next to the beds on either side in the hut. Since they did not have bars we let them remain shut. Some roasted gram from the bags substituted for our evening meal of khichdi (rice and lentils) We lay down but did not talk; did not sleep immediately either. The dark night of the wild, like its other nights, was empty. There was only silence.

We had lit a fire between the two beds to keep ourselves warm. There was a nice orange glow keeping the darkness at bay.

I was not yet sleepy. I lay thinking how the day had been, the long distance through hills, valleys and dense vegetation; the pebbly, slippery up-and-down trails; how wondrous and unknowingly profound the people of this area are, and how little is known about them. I thought of Ehnar, too. Could it, and others like it, be called a village? Is there some form of human settlement that can be called a ‘pre-village?’ Where humans live and mingle together but without much kinship and friendship, completely without preoccupation? I remembered how catching sight of a bear skin on top of a hut we walked past had mortified me…and so on.

After about half an hour, there was a sound outside the window on my side – like a human palm rubbing softly against the plank, making circular motions. I listened for a moment, then dismissed it. It must be the wind, I thought, though usually there is no breeze at night (except during the monsoons when there are gales, too. And another thing: breezes do not make palm-like sounds). A few minutes later, it started up again and lasted a while longer. Then there was silence. I lay waiting for it to start up again – clearly, I wasn’t imagining things. There it was again. Maybe it is a wild boar scratching itself against the mud wall, I thought to myself. Boars often do that against trees to relieve an itch. I checked the string that held the door-chain and hook together: it would hold. I picked up my axe from under the bed and rested the handle against the bedside. An hour went by.

Then it came on the window on my friend’s side. In the fire’s glow I could make out he was asleep and oblivious.

There was no way a human would be out between sunset and sunrise – such is the unwritten law of the land, forged over centuries of direct experience of the wild forest’s unfathomable darkness.

That it could be a human being was in no way possible. Humans do not move around at night, even if someone has been bitten by a cobra and the medicine man has to be summoned. There was no way a human would be out between sunset and sunrise – such is the unwritten law of the land, forged over centuries of direct experience of the wild forest’s unfathomable darkness. That was why we did not come out and run down to the main village nearby. Moreover, there was no earthly reason for anyone to be rubbing their hands against our windows. After a few minutes, the sound started up again. Then followed about an hour’s silence. I felt sure that it would not come again, that it was now over.

I do not know why but, lying there, I turned back my head to have another look at the string. There were soft tugs at it, as though someone was trying to loosen the knot on the inside of the door. Instinctively and with a backward jerk of the hand, I flung the axe at the door. I saw my friend was up, sitting on the floor and blowing on the dying embers. Since we did not have a second axe, he sat with a rusted bicycle pump in his hand which he must have found in some corner, perhaps left there by the government official who had occupied the hut before us.

‘Why are you troubling us and not letting sleep?’ I asked in a loud voice. There was no reply. ‘I’m not coming out,’ I said, and then, more boldly than I felt, ‘Don’t you dare come in!’ It was a conversation of sorts, albeit one-sided. I was angry and scared simultaneously; perhaps it was that that helped me cope at that unearthly hour in an abandoned hut on a night in the wilds.

Nothing happened for the next couple of hours. The wild night was at its usual best; silent and unstirred. There was no sleep; not a word passed between us as we sat quietly.

Against my better judgement, I waited again.

A lump of mud rolled down the sloping roof to the side of my friend’s window. Softly rattling the silence and the tiles, it fell with a thud to the ground. It could not be a piece of stone: the sound would have been different. Silence again for next twenty minutes or so. We could do nothing but go through that which we could neither see nor understand nor argue or engage with. Then another lump rolled on my side of the roof and fell with a similar thud. This went on for the next hour and a half. Each time some dust fell from the ceiling onto us. I was a little afraid that the tiles might slip or break. Meanwhile, the string remained undisturbed.

At around four in the morning, a bigger lump rolled down and fell from the roof on my friend’s side. Then came another, even larger, from my side. Then utter silence. Shortly afterwards, we heard faint voices: indistinct, but definitely those of a man and a woman.

Then the first cock crowed. The sun would be rising soon.

Government offices, rest houses, primary health centres, living quarters and huts in many villages in Bastar stand in long-abandoned graveyards, slightly outside the village. The exception is the school, which is always in the village. There is no easy way of knowing where one lives in a government property – graveyard, playground of ancestors or completely virgin land. Why the village gives such land to the local government is not hard to fathom. It speaks for itself.

My friend and I never talked of that night: it has been thirty-five years to this day. There is nothing more to be said.