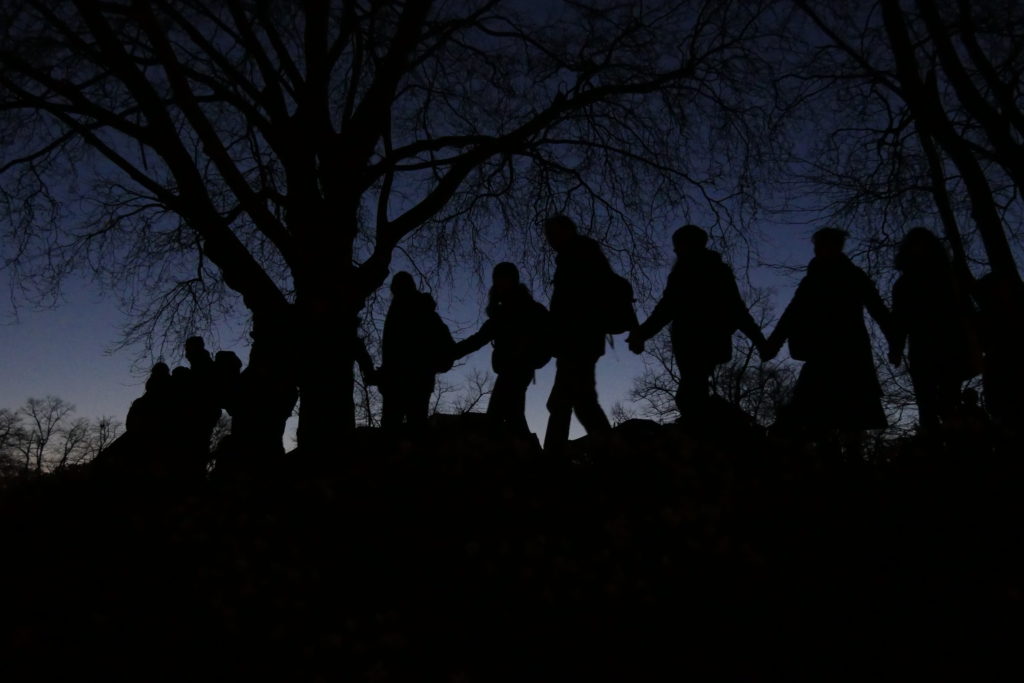 Image by Georgia Wingfield-Hayes
Sarah Thomas
Sarah Thomas is a writer and journeyer currently working on a memoir about a period she spent living in remote northwest Iceland. She is particularly interested in how we engender an active and reciprocal relationship with place.
Share
It is late. The night is dark and the sky is clear. The ground beneath my feet is hard, where I would not expect it to be. I am standing on a former tennis court surrounded by sycamores, on an island in the River Thames at Reading – a town that has three times tried to be designated as a city, and failed. Across the river, the square windows of high office blocks hang in axes of fluorescence, fingered by the silhouetted branches of these trees. The sycamores self-seeded: thrived and grew tall where the strimmer could not reach them, beneath the no-longer-tennis court fence. In the undergrowth, red jar lanterns snake into the woods. At the centre of this concrete court, the embers of a large fire speak their last orange murmurs.
At dusk, these red jar lanterns were borne here by fifty curious people, out of their illuminated comfort zones, across the river and into the layers of night around our feet, our skin; inside our senses. Tonight, the fire to which the people were finally led became a hearth for story and song, the likes of which this island, this tennis court and these people had not known together. Now they are gone back to their comfort zones, perhaps a little changed. One by one, we blow out the candles, returning the island to darkness.

There is an explosion. A piece of concrete flies through the air scattering orange fragments into the black night. The heat from the story fire has pushed the tennis court to its limit.

I am a Bearer. I carry the night in me. I let it speak for itself.

I am Night. I am everywhere light is not.

I am slipping into my skin now. I am full deep dark and clear, and sated with story. The touch of humans lingers on me – their attention, their feeling – here on this island where I am allowed to be almost complete. Moments ago I was, for once, honoured in the heart of this town which, like all towns, banishes me to the corners. Let me tell you how it felt.

As the sun conceded its last rays, a circle of open-hearted people gathered in the park – Forbury Gardens they call it. Five beings – human, but something other too – were dressed in my colours head to toe: dark suits, dark hats full of twilight.

I was with these beings when they were in training for this moment; when they filled those hats. In a wood in southern Scotland, we merged for a weekend. They dwelled only with daylight, candlelight, and darkness. In daylight they ran full pelt with their eyes closed, guided by a seeing companion. They learned to turn and sense, being sung from the edges by their kin. Later, as the horizon drank up the day, they sat in silence awaiting my approach, listening as I bloomed. They spilled the word crepuscular from their lips onto my skin, and I spoke my twilight onto theirs. They heard crows in the branches and breathed them into their bones, into their movements, until I had fully arrived. Walking slowly, blind but fully aware, they took what they had seen and smelled and heard back to a stone barn. They did not turn on any lights: the whole of me remained with the whole of them. They carried all of it and placed it into these hats. They feasted by candlelight and raised their glasses in a toast to my health. I have not felt so welcome for many, many moons. Bearers, they call themselves. Wearing those hats, they become my vessel. 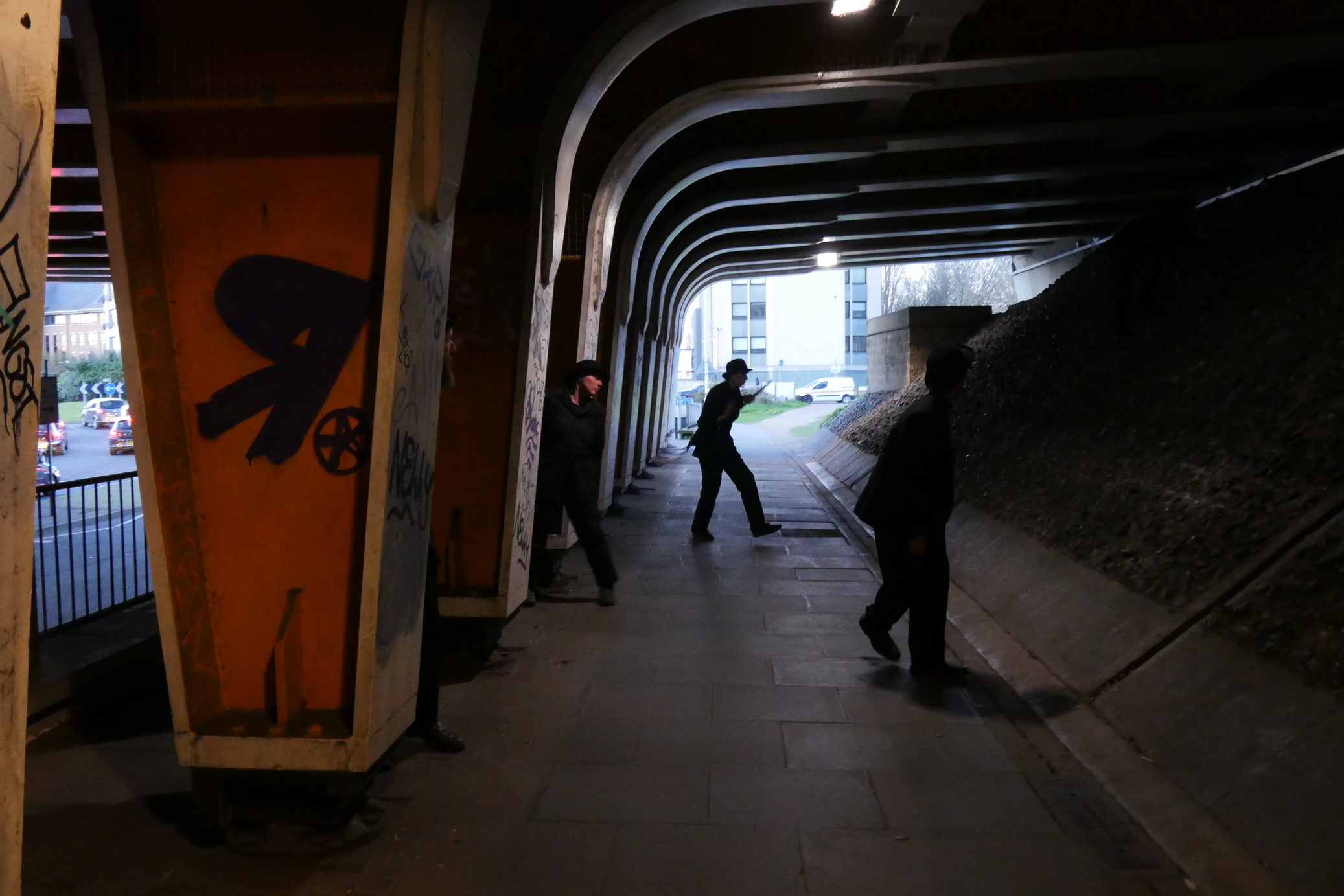 Reading is to those woods more different than the sun is to the moon. Redeveloped they call it. The earth is mostly covered over with tarmac and concrete, which spreads wide and high into me. Electric light grows from this tarmac on metal stems and spills out of apertures of concrete and brick, pushing me ever further from the earth. Even the great river is channelled in unnatural directions by these transient structures that they believe so permanent. Some small spaces try to heal from this colonisation. The island is one such space. In some spaces Nature (as they call it) is arranged in ways that are deemed acceptable. Forbury Gardens is one such space.

The Bearers flocked around that circle of people in Forbury Gardens like a small murmuration, corralling them to their nighthood. Each of their characters was distinct though all were united by their crepuscular blood. Heads cocked, arms folded like wings behind them: a convergence of human, night and crow – a being we had created together. In the centre of the circle, three of the Bearers’ kin showed this gathering how to move with them in trust, how to open themselves, and how to give their vibration to me and to each other. A hum, a sounding, was shared around the circle. It rose in a dome, pressing into my body.

A red jar lantern was placed into the hands of each open, vibrating person – a candle flickering within. Candlelight does not banish my darkness; it illuminates it. In those woods in Scotland, one dear man had painted three hundred of these jars with red, so that the candlelight did not draw attention to itself, but to me. 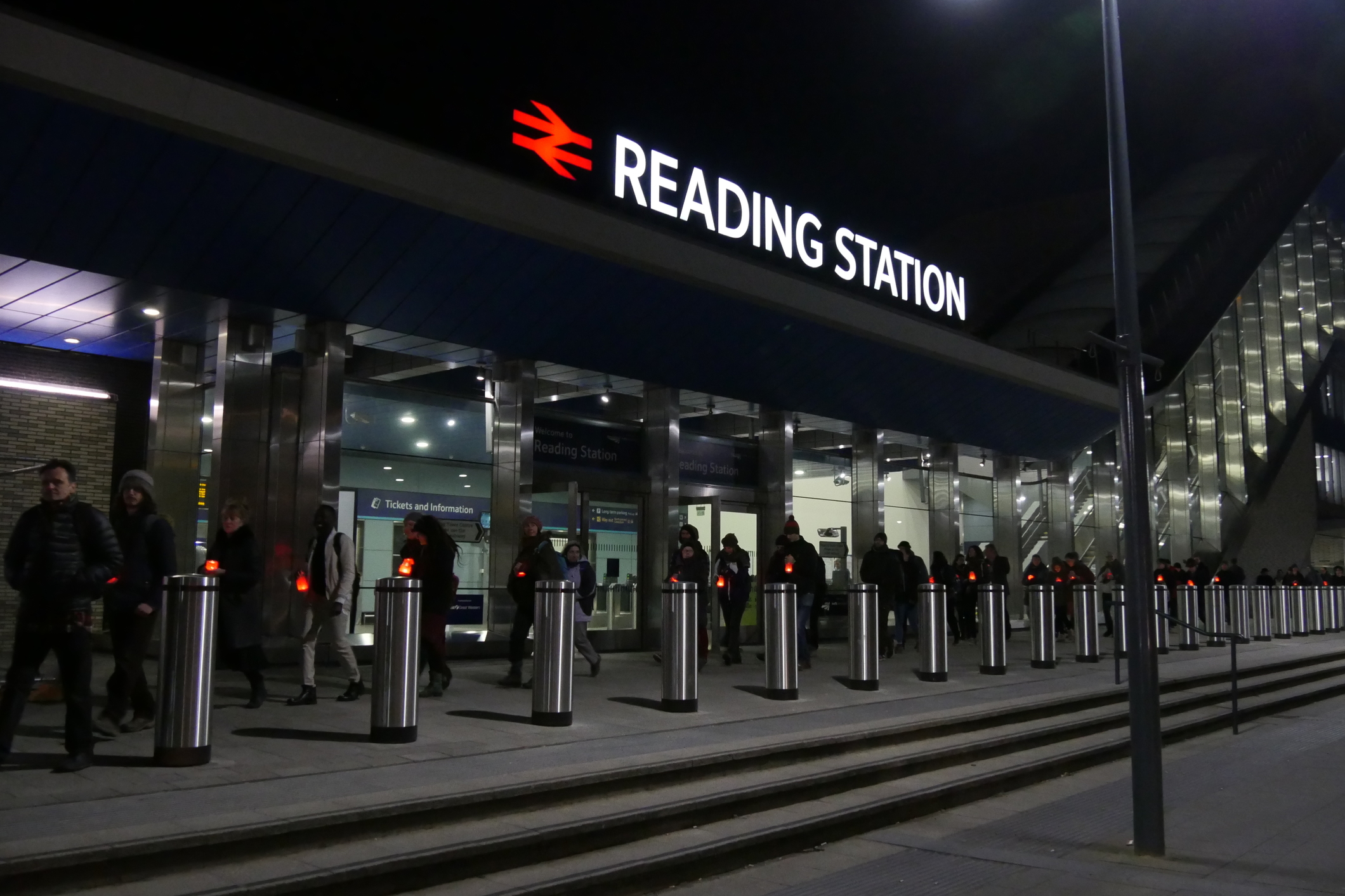 Like the unspoken moment at dusk where the moorhens climb from the water into the rushes, the Bearers and the curious folk peeled away from that park in a string of redglow through the streets, through the places where I am pushed out: underpasses, a train station, shop fronts. The Bearers threaded my essence through the procession and through these bright lit spaces; for once the darkness piercing through the light. Playful, poetic, present. One played flute in the tunnels. Another played with a skateboarder’s feet. All of them played with each other and placed fragments of moss and poetry into people’s pockets, and spoke it into mine. The other people – the people who do not know me, going about their bright light Saturday night business – were moved, amused or confused by this sight. They fished for explanations; asked questions. Who’s died? one said. I have not, I whispered to him. But I am facing extinction from your world.

Beyond the brightness and beside the river, I could begin to play my part with the redglow people. We began to share breath. The receding of vision left a space which filled with sound and smell: the churn of the weir, the ringing bells of Sentinels who flanked a small bridge onto the island, the shuffle of each other’s slow footsteps. Clutching their lanterns, they entered View Island and could not see.

Three candle-flickered faces awaited them there, huddled. The Wild Poets spoke the words of Wendell Berry:

To go in the dark with a light is to know the light.
To know the dark, go dark. Go without sight,
and find that the dark, too, blooms and sings,
and is travelled by dark feet and dark wings.¹

The vibrating strings of a fiddle called them first. They moved towards it and found a heron with a head of long grey hair. In fact, almost sightless, they each found something different which bubbled from their own story springs, but the heron is what I saw. The Cailleach they called her – the Celtic creatrix hag of the dark winter. Cailleach perched gracefully on a bench, swimming in me, her staff discarded and her arms now free, dancing to the fiddle’s music. She ushered them onwards with her long beak, deeper into me, deeper into themselves.

A rustle in the thistle patch. Arched back. Black. Big haunches. Sniff sniff. White flash. Is it a badger?! I hear a child say.

Some paused, attempting to decipher. Most continued slowly onwards, always onwards, moving through me.

The flitting krunk and caw of two ravens in a tree, their dark and my dark commingling.

The disconcerting stillness of a wolf, staring, but unseen.

Onwards, always onwards. What is it to ‘see’?

A stag standing at a distance, scuffing in the undergrowth. Antlers like antennae for another world – a world that was and shall be.

And heron once more, poised at a pool that was once a toxic dumping ground, reeds nodding to her slow dance. 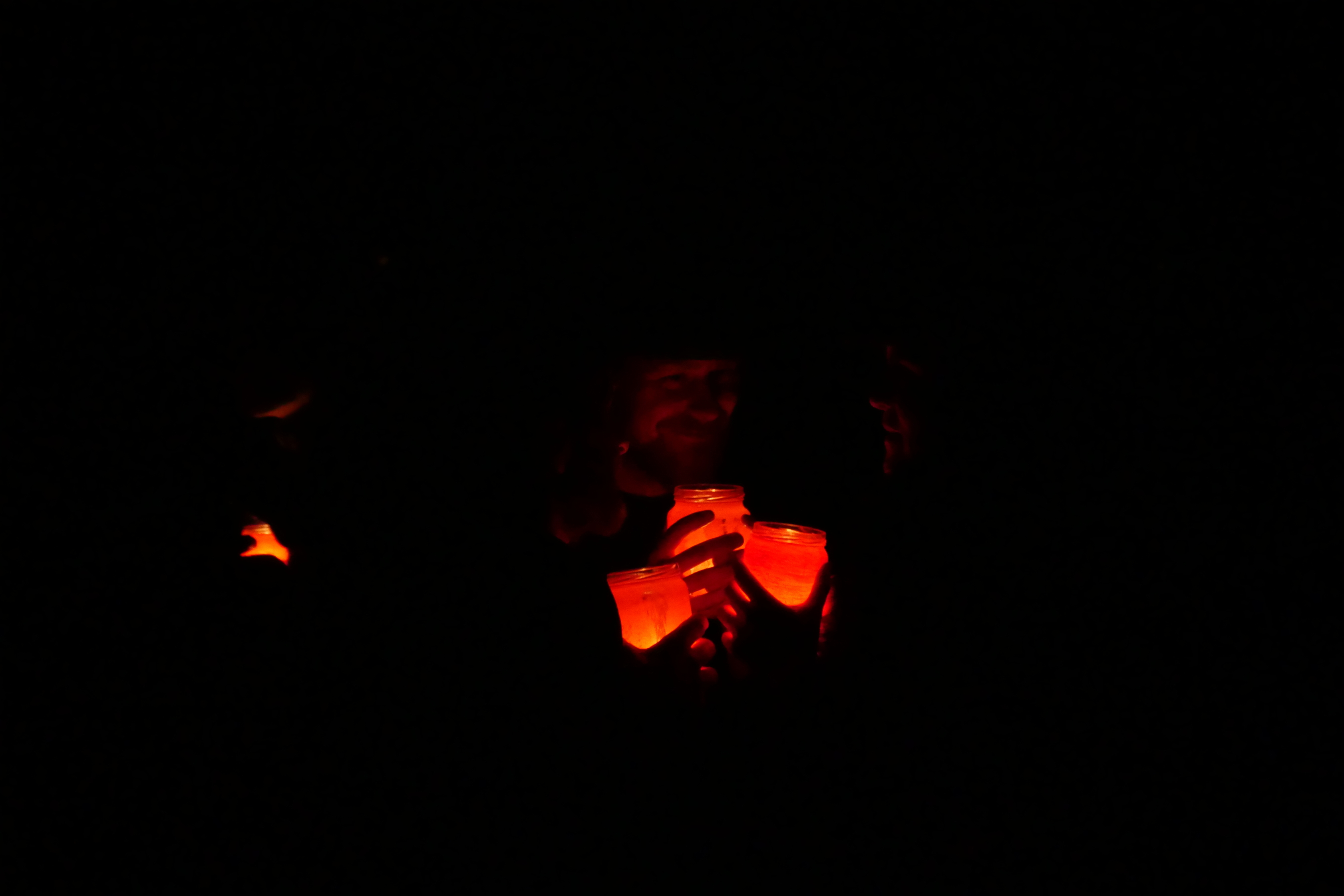 Through a narrow gap in the sycamores the people and the Bearers joined hands and snaked onto the concrete of the no-longer-tennis court, moving silently in an ever-morphing spiral into the heart of me. At the four corners, I was illuminated by beings dressed in white with lantern crowns made of sprigs: the Ancestors, where we all began. They held watch over skeletons of badger, fox, roe deer and hare. Like a family of hands, the trees held the people, the creatures, the Bearers and the Ancestors all together in this space and in this moment. The people-snake finally stilled, encircling a stack of logs and a ring of ivy. My Bearers went to greet the Ancestors and returned with the primordial hum, gifted to the circle. The ivy began to move. Out of its dark waxy leaves, two more white figures twitched, rose, and evolved into Fire Lighters. Logs became light and warmth.

I am not trying to understand, I heard one man whisper to another. It is enough to be amazed.

And so the hearth was created. The Fire Lighters returned to the Ancestors. The Bearers placed their hats in a circle around the fire, slid out of their dark suits and returned to the world of humans. A toast of plum and lavender brew was raised to all beings, to the open-hearted people, to the turning of the year, and to me. This is how the fire was passed on to the people of now in a night of story and song. This is how the glow reached out to those people, up into me and deep into the ground. Waking up our old bones, reminding us all what we are here to be. Reminding us of the soil beneath the concrete.

The Night Breathes Us In was dreamed up and brought into being by Darla Eno, Dougie Strang, Tamsin Wates and a fine crew of performers, musicians and volunteers.