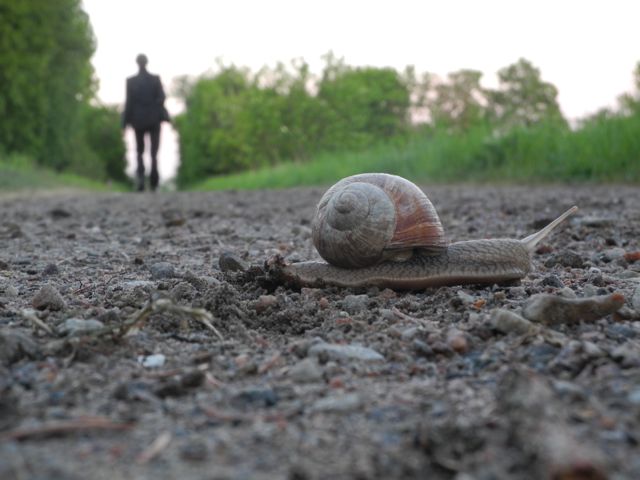 Monique Besten
is an artist, writer and educator based in Barcelona and Amsterdam. She makes long-distance performative walks through Europe and researches slow ways of being, connections between artistic media and different fields of life. She teaches performance art and artistic survival skills at the HKU University of the Arts Utrecht, NL and is a longtime contributor to Dark Mountain books and events.
Share
I first walked as an artist in Amsterdam, almost ten years ago. I was appointed to be the new bridge guard at the Bridge Guard Art & Science Centre in Slovakia. The bridge that was to be guarded symbolically was the Maria Valeria Bridge, connecting Slovakia and Hungary. A bridge that had been rebuilt recently. A bridge that, during its existence, had been destroyed many times to make it impossible for people to get from one country to the other. The Maria Valeria Bridge is 495 meters long — 711 steps. And before I travelled to Slovakia, for two months I walked 711 steps every day, starting from my doorstep in Amsterdam.

I never stopped walking afterwards. Short distances. Longer distances. Walking words. My own name. The amount of steps I was old on a particular day. But the first time I went on a really long walk, an absurd six-day walk following the exact border of a municipality in the east of the Netherlands, walking through fields, crossing canals, entering peoples’ houses, sleeping on the border in a small tent, I felt the way I had felt as a kid when I went out exploring the vast forest behind my parents’ house.

Some people would rather have wings but we don’t, we have feet. We were born to walk. Scientists say that walking gave us our brain capacity, walking turned us into the human beings we are. Walking made it possible for us to have the desire to fly and to come up with ways to turn our dreams into reality.

Walking made us fly. We can go anywhere. Still the easier it becomes to move through this world, the more disconnected we seem to get from it. We have to land again. Get close to the things. Be part of the world. Walking teaches us where we are, who we are. A slow speed makes our brain work fast. Makes us see more. Be more. And best of all: walking makes time disappear.

After my first long walk I was hooked. There was no way back, although I didn’t fully realise it until a year later. That year I walked from one end of Belgium to the other together with a group of artists. I was a Walking Librarian, I carried books. And I wore a suit. A business suit. A three-piece walking suit. 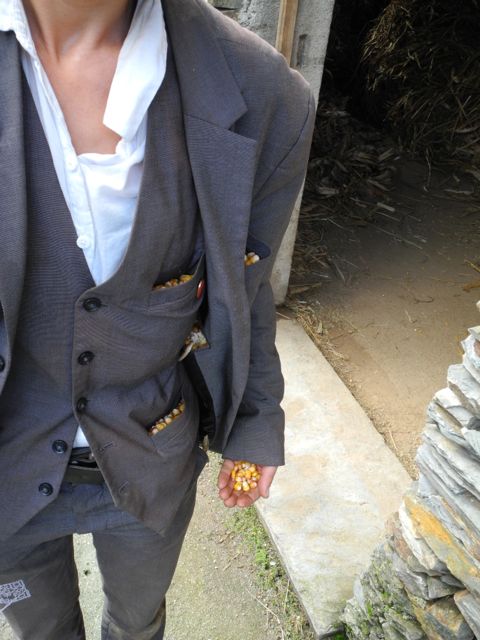 I figured that when something is called a walking suit, it must be meant for walking. I believe in words. And indeed in earlier centuries people used to dress up when they went out for a walk. You can see it in old photos, in movies. How people wore a suit doing their daily activities. Got married in it and buried in it. Painters, writers, farmers, noblemen. August Sander photographed three young peasants walking, on their way to a dance, wearing suits. Caspar David Friedrich’s ‘Wanderer above the Sea of Fog’ is dressed very neatly. Charlie Chaplin wears a suit as the Tramp.

I remember my grandfather wearing a suit everyday and wearing the trousers of his old suits when he was working in the garden. I heard stories about men hiding their best suits in the bomb shelter during the war so in case their houses were bombed, they would at least still have their best outfit. These days there is Anonymous, often symbolised by faceless people in suits. And the other day a man told me he had sold all his belongings but he kept his Armani suit. The French composer Erik Satie owned 12 similar suits, wearing one until it was worn out and then moving to the next one. The day he died there were still six unused suits in his apartment.

I call my suit my soft armour. It keeps me warm, safe, sound, it opens doors. It is my uniform, my costume, my house. It has many pockets. It is as comfortable as any outfit I can think of. I use it to collect stories in. I don’t mind when it gets dirty, torn, worn out, when the world leaves its traces.

The suit is my interface between the worlds I move through. Between the land I walk and the body I walk it with, the place people refer to as ‘the real world’, but which I consider to be just as real as the other world I move around in, the ephemeral world wide web. The stories I encounter, held in my hand, find a new home in the suit. From there they move into the other world.

There have been five suits. I wore the second one for 108 days, using it as my notebook. I embroidered drawings on the inside. I counted the days on my collar like a prisoner does, or somebody waiting for a special day. After 108 days I took it off. It wasn’t too long after I had read this in Thoreau’s Walden:

I say, beware of all enterprises that require new clothes, and not rather a new wearer of clothes. If there is not a new man, how can the new clothes be made to fit? If you have any enterprise before you, try it in your old clothes. All men want, not something to do with, but something to do, or rather something to be. Perhaps we should never procure a new suit, however ragged or dirty the old, until we have so conducted, so enterprised or sailed in some way, that we feel like new men in the old, and that to retain it would be like keeping new wine in old bottles.

I took off the suit. I walked the streets naked. I got myself a tattoo. I travelled to Sweden.

In Sweden I wore my third suit. I caught snails in it, I walked old pilgrim trails. I learned about slowness. I embroidered the suit with a neverending red thread, turned it into a map. I thought about the Chinese saying that all people who are destined to meet are connected by an invisible red thread. 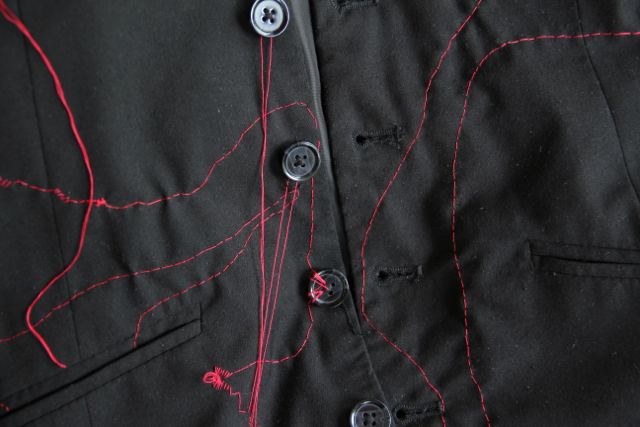 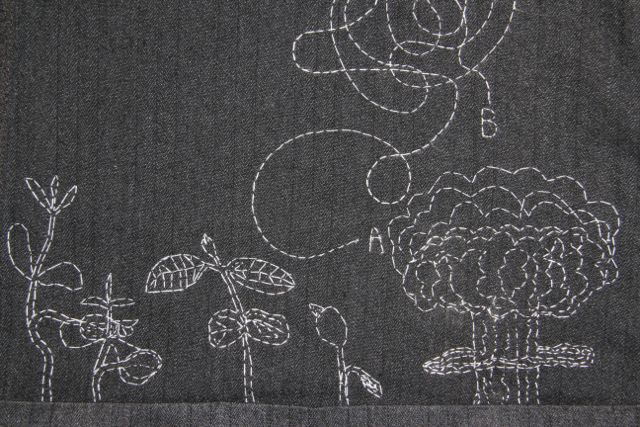 The fourth suit was somebody elses’, I found it in the closet of the room I stayed in when I worked as a pioneer in the Swedish woods. It was exactly the sort of suit you see people wear in old movies. The suit that accompanies somebody during his whole life. It had belonged to the man who once lived in the lonely house in the woods I was staying in. I wore it one weekend, at a secret rave party in the woods. I brought it back to Amsterdam. It is still there, waiting for something.

The fifth suit, the fourth soft armour, kept me safe all the way from Amsterdam to the Nomadic Village in the south of France. I had asked people to symbolically walk with me, pick a day, give me something to get me through the day and in return I embroidered their names on the inside of my jacket. I wrote a story every day. And in the Nomadic Village, a mobile art society run by and for artists, I opened a Memory Shop, embroidering peoples’ memories into other peoples’ pockets. 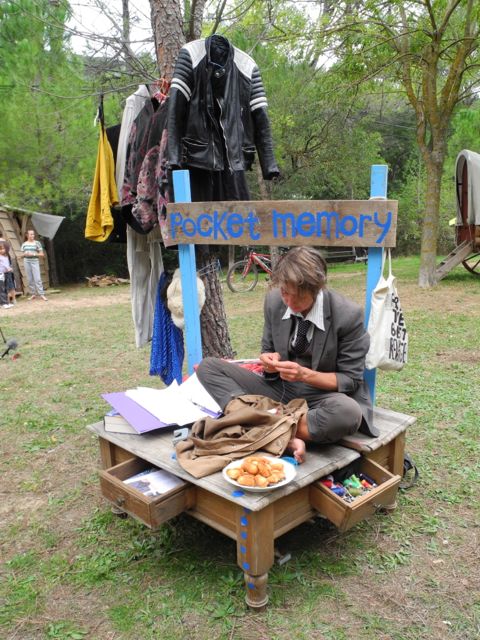 The suit kept me safe afterwards, when I harvested corn in a small mountain village in Portugal. On my last day there I filled my pockets with corn and I left a trail.

I knew I needed a trail. I know how easy it is to get lost in the modern world.

And I was right. Because here I am, back in the ‘real world’, wondering if I should go back to walking. Wondering if I shouldn’t get myself a proper job. Some proper funding. A house to return to. Stability. I know the corn trail I left has disappeared, the kernels have been eaten or trampled by goats. I knew when I was leaving them behind that it didn’t make sense. Just as measuring the corn sheds with my body and wrapping hundreds of kernels in red thread didn’t make any sense.

Here I am. Sometimes I don’t see the sky all day because my city apartment is on the ground floor. Sometimes I don’t see my friends for weeks because they have to earn money. Because I have to earn money. Sometimes it feels as if the only way I add meaning to the world is because I pay taxes. Sometimes I follow the rules and feel unhappy, I go through the motions and feel like I wasted my time. People tell me that this is how the world works. Some of my good friends even tell me that. And if that makes sense, then walking the world in a three-piece walking suit might make even more sense.

I’ll get my things together. 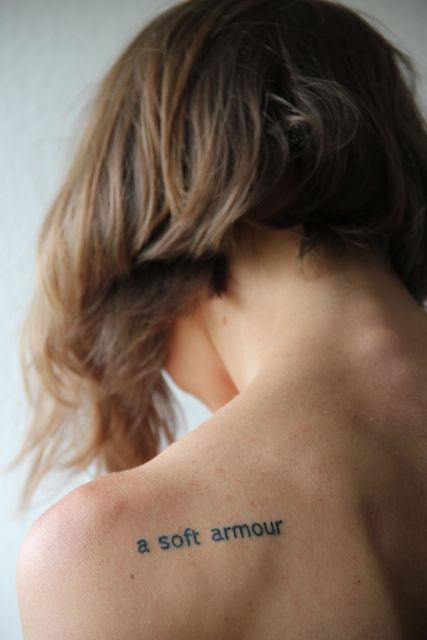 In April I’ll be leaving for a 99-day walk, again to the Nomadic Village, this time in the east of Austria. My suit will have an embroidered QR code linking to my blog, a lightweight solar panel attached to my jacket, I will carry my house with me, I will find and create new stories, publish them online and embroider them on the outside of my three-piece walking suit. More here and how to walk with me: asoftarmour5.blogspot.com and moniquebesten.nl