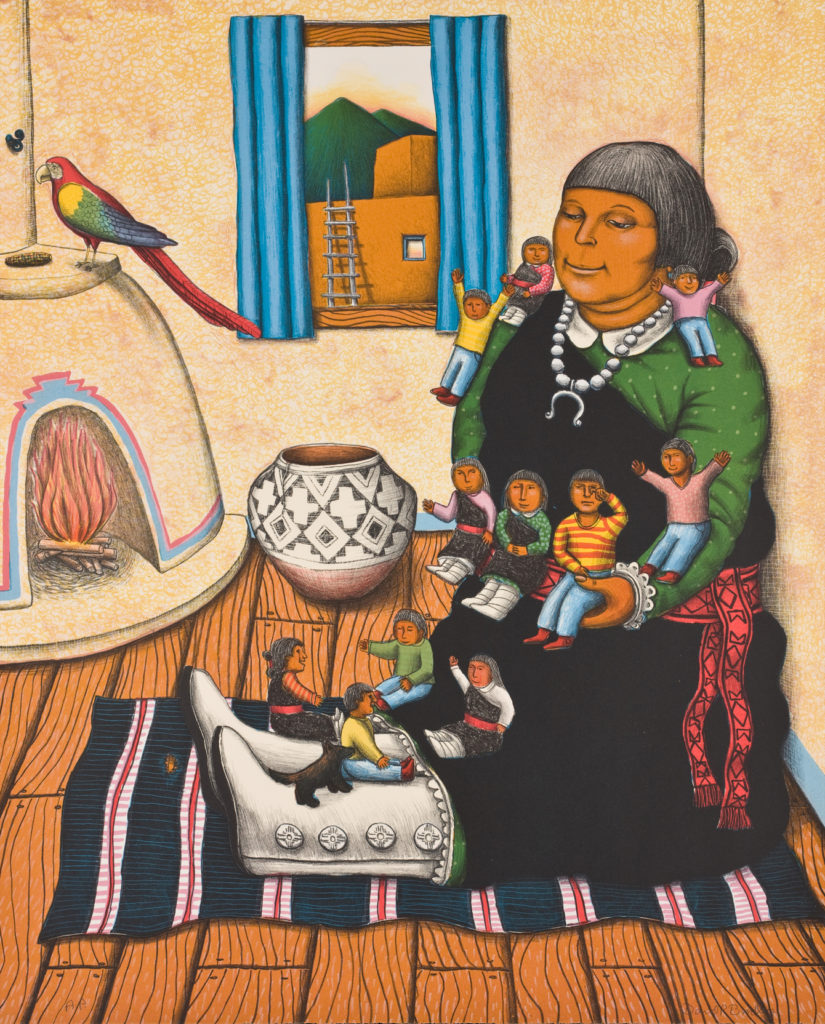 David Bradley, White Earth Ojibwe Storyteller, 1980s By Peabody Essex Museum - Own work, CC BY 3.0
Shiba Desor
Shiba Desor is a member of Kalpavriksh, an environmental group based in Pune. She is part environmental researcher, part organiser of gatherings, part food-writer. She has co-authored a children’s book on food called Something To Chew On.
Share
Do you remember any storytelling sessions from your childhood?

I had posed my long-standing favourite question once more. This time to Saw John Aung Thong, a person from the Karen community living in a village in Mayabunder in Middle Andaman.

‘There were so many,’ he answered. ‘During the harvest time we would all sleep in the lower part of our house and have long storytelling sessions way into the night. Our house was like any other traditional Karen house, a bamboo hut on stilts with its lower part set aside for storing grains.’

What John said may seem simple enough but it made me realise that I had gotten so caught up with exploring the content of folk stories, that I had given little time to think about the pivotal role played by the site of the exchange. But taking a cue from his observation, I started noticing the connection of space with stories.

For the aan-kath (riddle sessions) of Munsiari in the Himalayas, the kitchen with its central hearth (locally known as raun) was a space for people to gather during snowbound winters for long-winding sessions of guessing-games of local riddles, some hilarious, some educative, and many both. For the Diné tribe of North America, there is sacred significance in holding storytelling sessions in winter in hogan, their traditional circular dwellings with a central fire. Amongst the Guna Yala people of Panama, the sacred history and legends are sung by Saila, the spiritual and political leader, in a special meeting house (onmaked nega).

On a closer look, it becomes clear that many customary forms of storytelling have also had a customary setting. The settings vary. While some require a rooted, bound place for a story, others require more open space. It doesn’t have to be a constructed shelter and could be the canopy of a banyan tree, the top of a mountain, the bank of a river.

I once heard Pascal Gbenou from Benin talk about how a tree in their area was known as the ‘chatting tree’ because people would go there for gossiping. The logic was that since it was in the open you had a 360 degree view around you. It was not considered appropriate to ever gossip in an enclosed place for you would never know who is there on the other side of the wall! That made me think about how in my own hometown in Punjab, people spread out cots in an open courtyard in summer and exchanged stories.

The storytelling can sometimes overflow further into the landscapes, as is seen in the songlines of Aboriginal tribes running through the length and breadth of Australia, inextricably linking space with story. These are pathways stretching across the land or the sky that, according to indigenous Australians, were followed by different creator beings at the beginning of time. There are traditional songs that are sung by indigenous people as they travel through these routes, the words and rhythm of which vividly bring the landscape of the route to life.

Can we then really talk about traditions of storytelling and their relevance while ignoring their linkages with the settings in which these arose, took shape and bloomed? What happens when the banyan tree is sawed down? When the kitchen loses its circular setting with the central hearth, and is instead implanted with shelves that force the people preparing the food to turn their back to the rest? When the lower floor of a Karen house on stilts becomes a space filled with rooms instead? When a sacred rock is mined? Or when the Australian landscape of dreaming spirits becomes obstructed by humongous technological structures that may be hideous but ‘more important for progress’.

We are losing these spaces which allowed the stories to flow and it is hard to tease out the reasons. Did we lose the space for the stories because we didn’t find them relevant enough, or was the loss of stories merely a collateral damage when that space was colonised for other priorities? It is like a chicken-egg paradox. But whichever came first, somewhere along the ‘march of progress’, a little by choice, a little by circumstance, we have managed to end up in place that has left little space for stories.

So what happens now? In an age obsessed with recording and broadcasting thoughts and life-events on a minute-to-minute basis and in our tendency to look for one-size-fits-all solutions, the documenting of folklore may seem like a tempting route to take. But for stories that have forever flowed through a different channel, putting these down in ink may end up turning them into dry museum pieces rather than living, flowing entities.

I have little knowledge of the latest architectural trends, and I know that we are at the brink of loss of old spaces, old stories. But perhaps it is still not too late. Perhaps as the need for stories is rekindled, there will also be a rethinking of spaces, rethinking of the design of houses, community spaces, towns and entire landscapes. Perhaps we will be able to save ourselves, coming back from the brink, with a mix of the old and the new.