The role of the visual arts within the Dark Mountain books has spread from a few colour plates in each issue to increasingly adventurous collaborations, while the invitation made in the manifesto has been taken up by all kinds of artists and arts organisations.

This section records some of the founding paths taken by visual artists around Dark Mountain, from street art murals to ephemeral rock paintings, from internet art to illuminated manuscripts.

There are plenty of words in a Dark Mountain book, but rarely any on the cover. Instead, the front of the book is given over to a commission from a guest artist.

From the Pied Piper figure painted by Rima Staines for Issue 2, to Stanley Donwood’s branching linocut that wraps around Issue 7, to Will Gill’s photograph Pink Figure, Blue World on Issue 11, these have set the tone and the aesthetic range of the project.

For those intrigued by the story behind these images, we always invite the cover artist to introduce their work within the pages of the book. 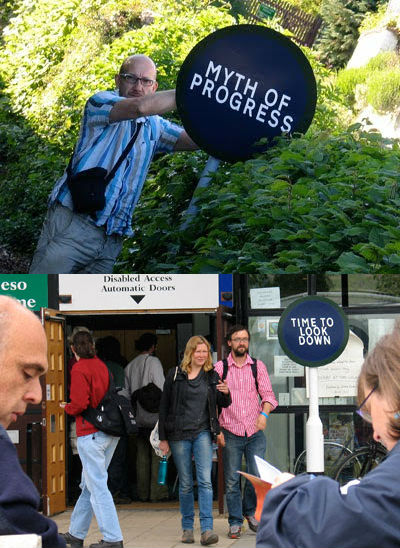 Visitors to the first Uncivilisation festival were greeted by this installation, created by Jaime Jackson as part of the iNTERTEXT project. A series of road signs marked the route to the festival venue with short excerpts from the Dark Mountain manifesto.

Do It With Others

A few weeks after the publication of the Dark Mountain manifesto, a mail arrived from Ruth Catlow at HTTP Gallery in north London, inviting us to collaborate. Since the 1990s, Ruth and Marc Garrett have worked as Furtherfield, creating and hosting platforms for collaborative, networked art.

In response to our manifesto, they proposed an email-art project – DIWO (Do It With Others) at the Dark Mountain – in which participants on the NetBehaviour mailing list would take the manifesto’s text as a starting point for works that would be reworked and remixed by other members of the list, culminating in a collaboratively curated exhibition at HTTP Gallery between November and January 2009-10.

As Furtherfield describe the project:

[The manifesto’s] challenge was offered to network-minded artists, technologists, writers and activists as a provocation – to work together to re-envision the narratives and infrastructures that govern our relationships with the natural world, and how they might be unravelled and rewoven to reconfigure our place in it.

One of Dark Mountain’s co-founders, Dougald Hine, was invited to participate in the process as a guest artist.

In the early days of the DIWO project, it became clear that the manifesto had indeed provoked some of the regular members of the list, and the strongly-worded exchanges which took place during this phase would go on to form the basis for a performance at the exhibition’s opening. Dougald took 12,000 words of emails sent to the list over a 48-hour period and created a 12-minute script for 12 voices; the participants sat around a dinner table in the gallery, reading each other’s words aloud, experiencing the force of words originally bashed out through keyboards and screens, when spoken to someone who can look you in the eye.

Those initial collisions on the mailing list gave way to weeks of collaboration, branching out in many directions, as artists around the world built on each other’s work to create a set of responses to the manifesto. 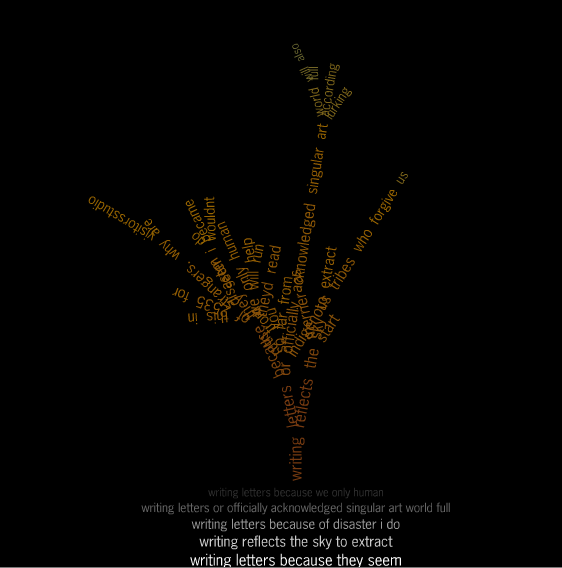 As part of the DIWO at the Dark Mountain project, Neil Jenkins of netpraxis created a remix of his work, Exquisite Copse, using the text of the DIWO discussions as a starting point. A play on the Surrealist game Exquisite Corpse, Exquisite Copse visually rewrites existing works of literature into a forest of word trees, from ‘seed’ words chosen by visitors.

Try Exquisite Copse at the Dark Mountain and grow your own word trees from the text of the DIWO discussions.

A horn of plenty

It must be the largest single work to have come out of the collaborations around Dark Mountain: a vast mural across the side of the old Church View art college in Doncaster, created by the renowned muralist and comic artist Phlegm.

The mural was created over several weeks in 2012 as a backdrop to The Telling, a series of uncivilised events organised by a group including the artists Horne+Draper. In Warren Draper’s photos, you can follow Phlegm’s work-in-progress. 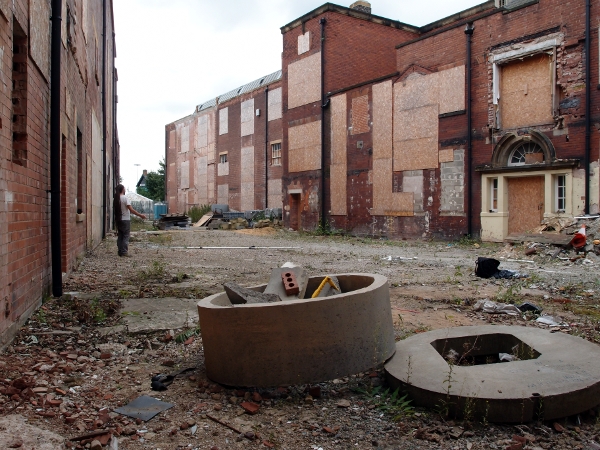 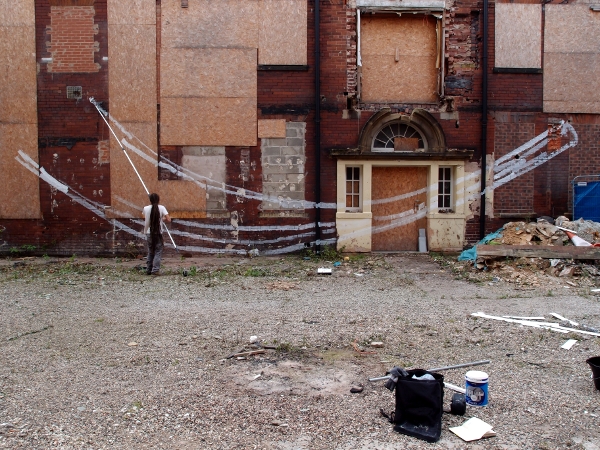 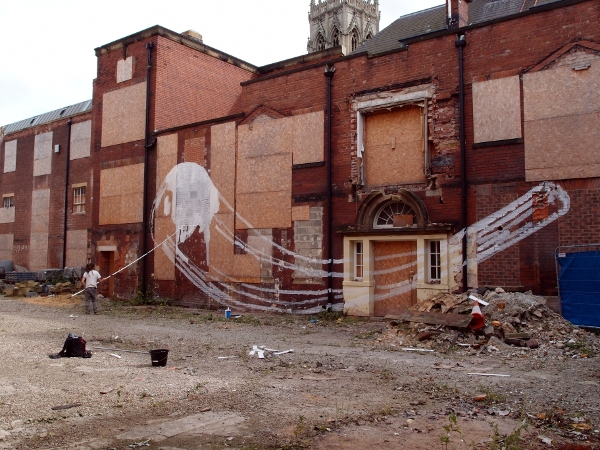 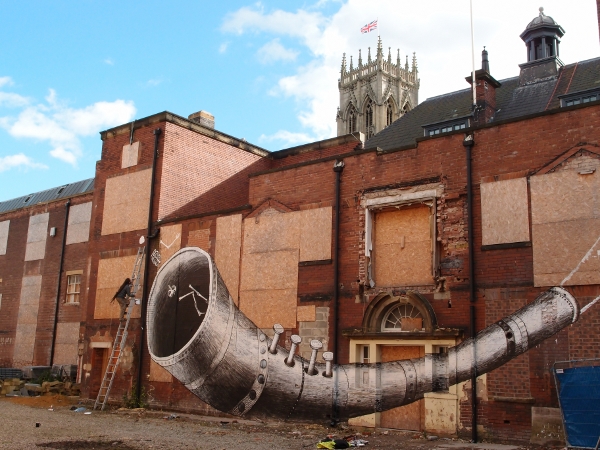 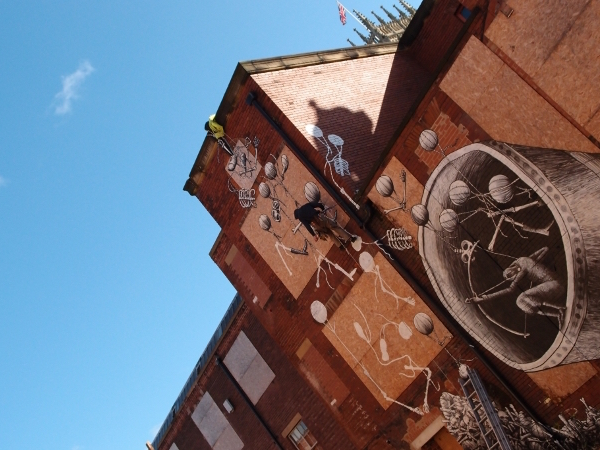 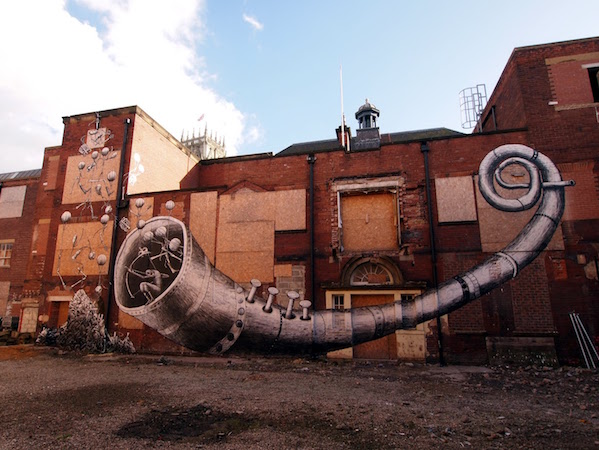 Over the months that followed, these images would loom over firelit scenes as the folk singer Jon Boden, the storyteller Simon Heywood and the artist and poet Rachel Horne were among the performers who brought The Telling to life. 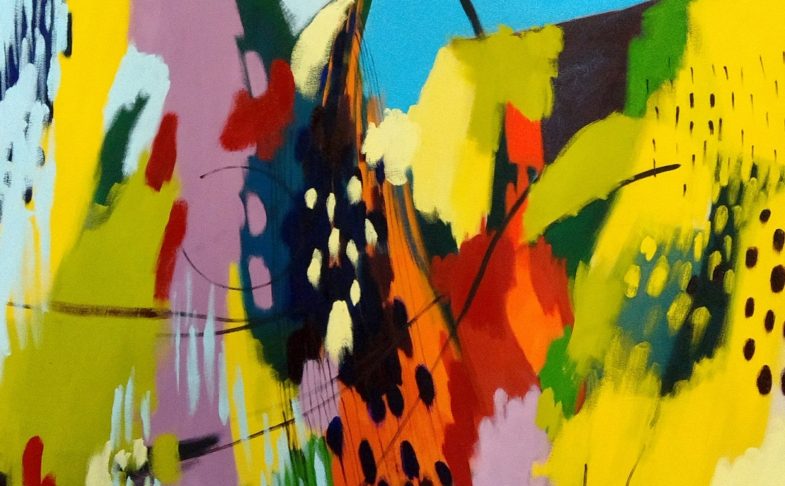 In February 2018, The Portico in Manchester was home to a solo exhibition from the artist Sophie Tyrrell. The work shown in The Uncivilised Sun draws on the Dark Mountain manifesto, exploring traditions in myth, folklore and popular culture, the idea of ‘uncivilisation’ and the alternative histories we share across borders and among peoples.

The skins of twenty deer

It started with an essay on the history of art and civilisation which Thomas Keyes sent in response to the first issue of Dark Mountain. The essay itself didn’t quite hit the mark, but something about it intrigued us, and when Dougald travelled to Scotland that autumn, he arranged to meet up with its author. In a cafe in Edinburgh, Thomas talked about the strange journey that had led him from Belfast to the Black Isle, and mentioned a piece he had been playing around with – part recipe, part essay, inspired by cooking dinner for his kids from a roadkill pheasant. ‘Finish that piece,’ Dougald told him, ‘I want to read it.’

‘October Black Isle Pheasant Stew’ was published in the next issue of Dark Mountain, and over the books that followed Thomas’s writing featured repeatedly, as did his artwork. Once a graffiti writer in Belfast, he had adapted to his new surroundings in the Scottish Highlands, collecting the bodies of roadkill deer, butchering them for the meat that could be salvaged and teaching himself how to tan their hides. These he would stretch and use as canvases on which to paint scenes of the deer in life, using pigments made from plants foraged in the woodlands where they had lived.

His research into the techniques of parchment-making led Thomas to the illuminated manuscript tradition which had flourished in Scotland and Ireland some 13 centuries ago, and here he found an unexpected return to the graffiti culture in which he had begun: the monastic scriptorium as much as the graffiti team had been a collective artistic enterprise, centred on the pursuit of ‘letters with style’.

The turn towards working with illuminated manuscript techniques came just as the Dark Mountain editors began thinking about a special issue on the theme of the sacred and the connection seemed obvious. So Dougald and Steve Wheeler approached Thomas to join the team for Issue 12: SANCTUM, as lead artist and art editor. This role expanded into a larger artistic project in which Thomas brought together a gang of collaborators who would create ‘incipit’ pages for each of the thirteen pieces of writing that made up the spine of the book, along with ‘window’ images that would interrupt each text. 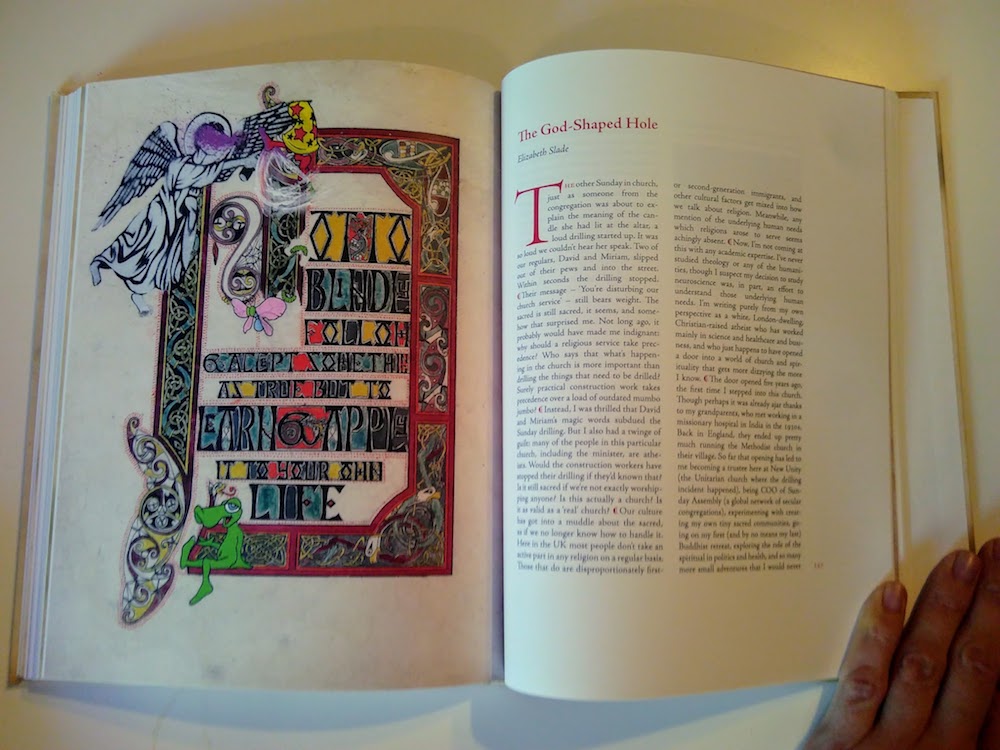 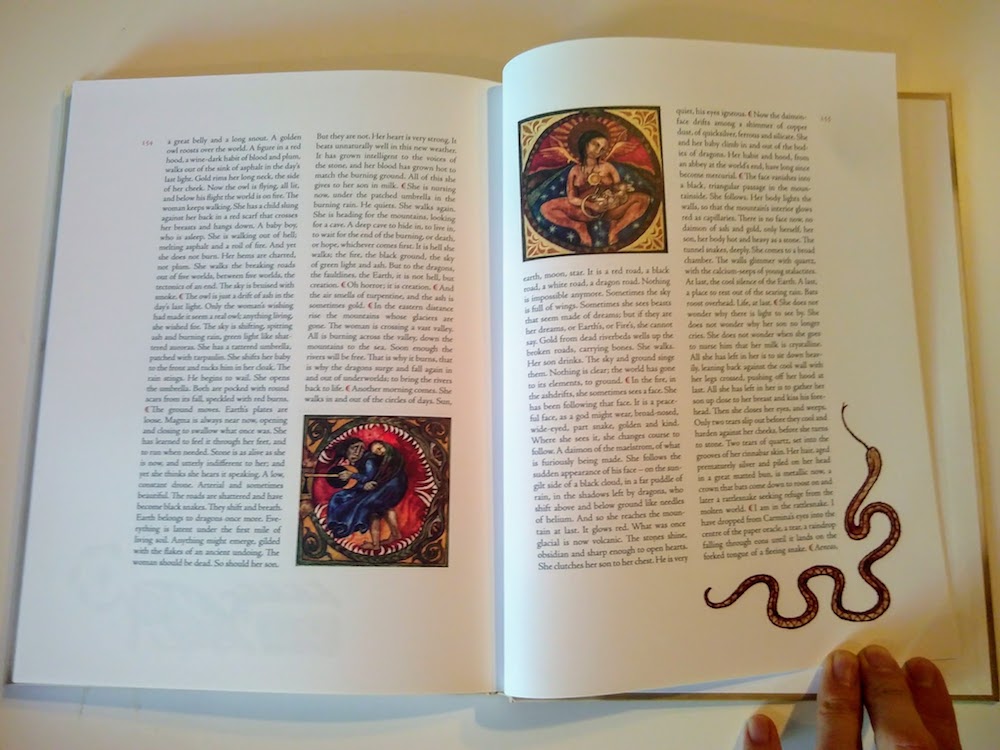 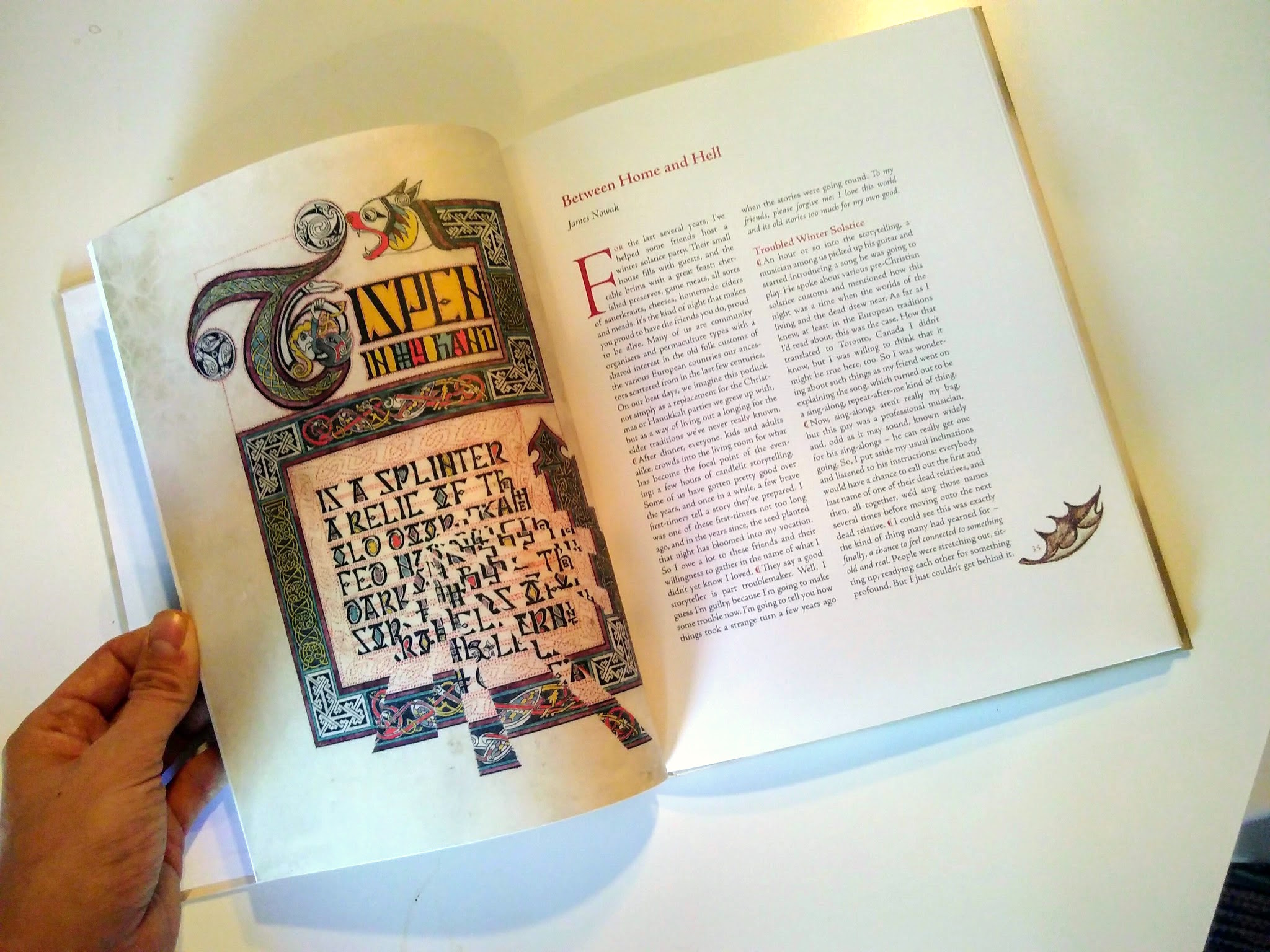 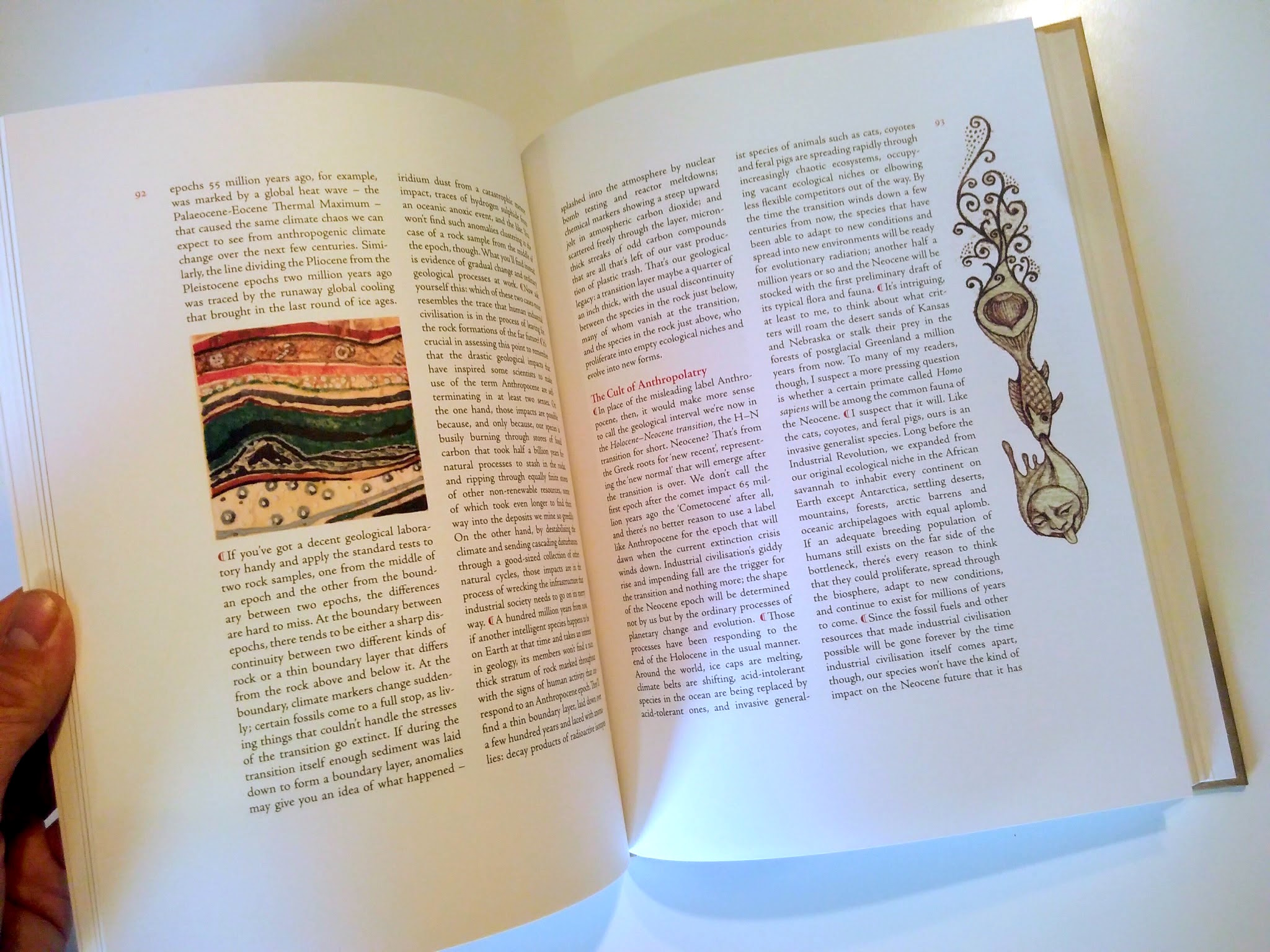 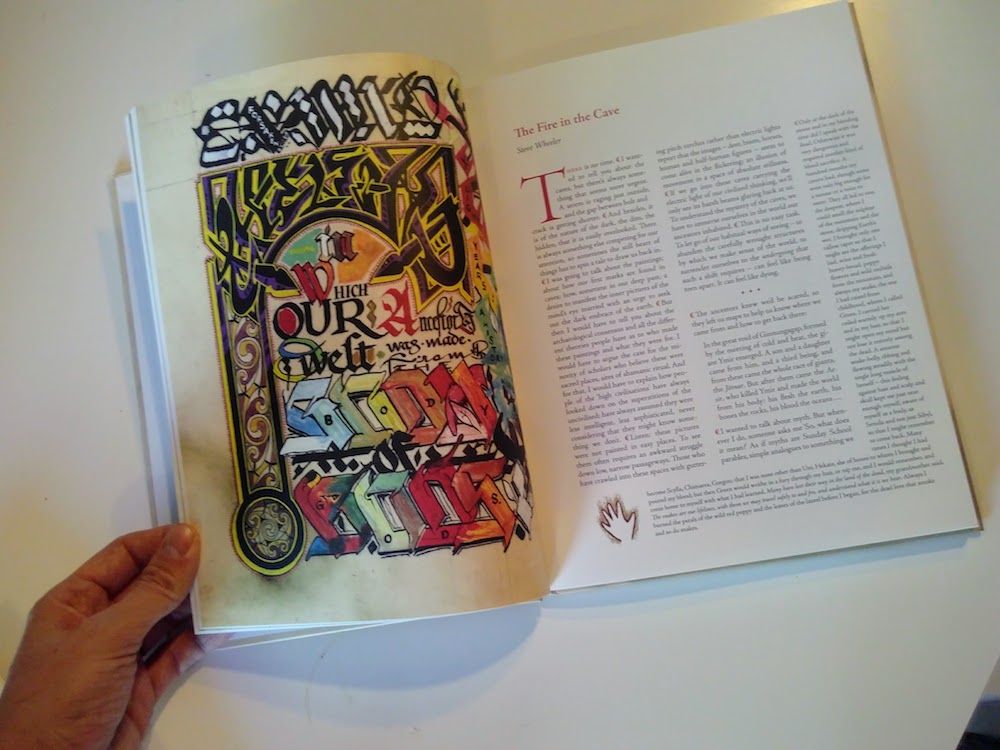 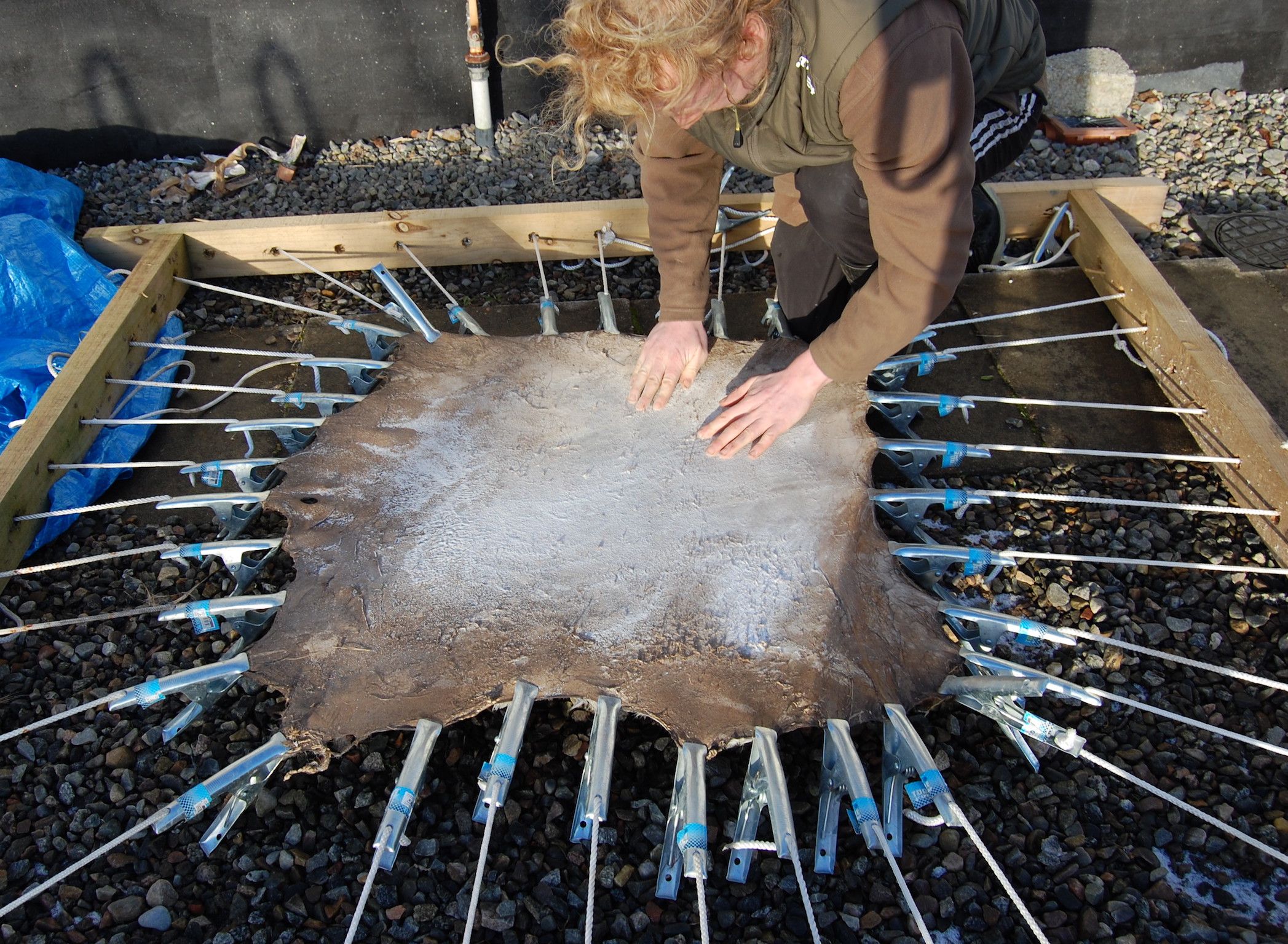 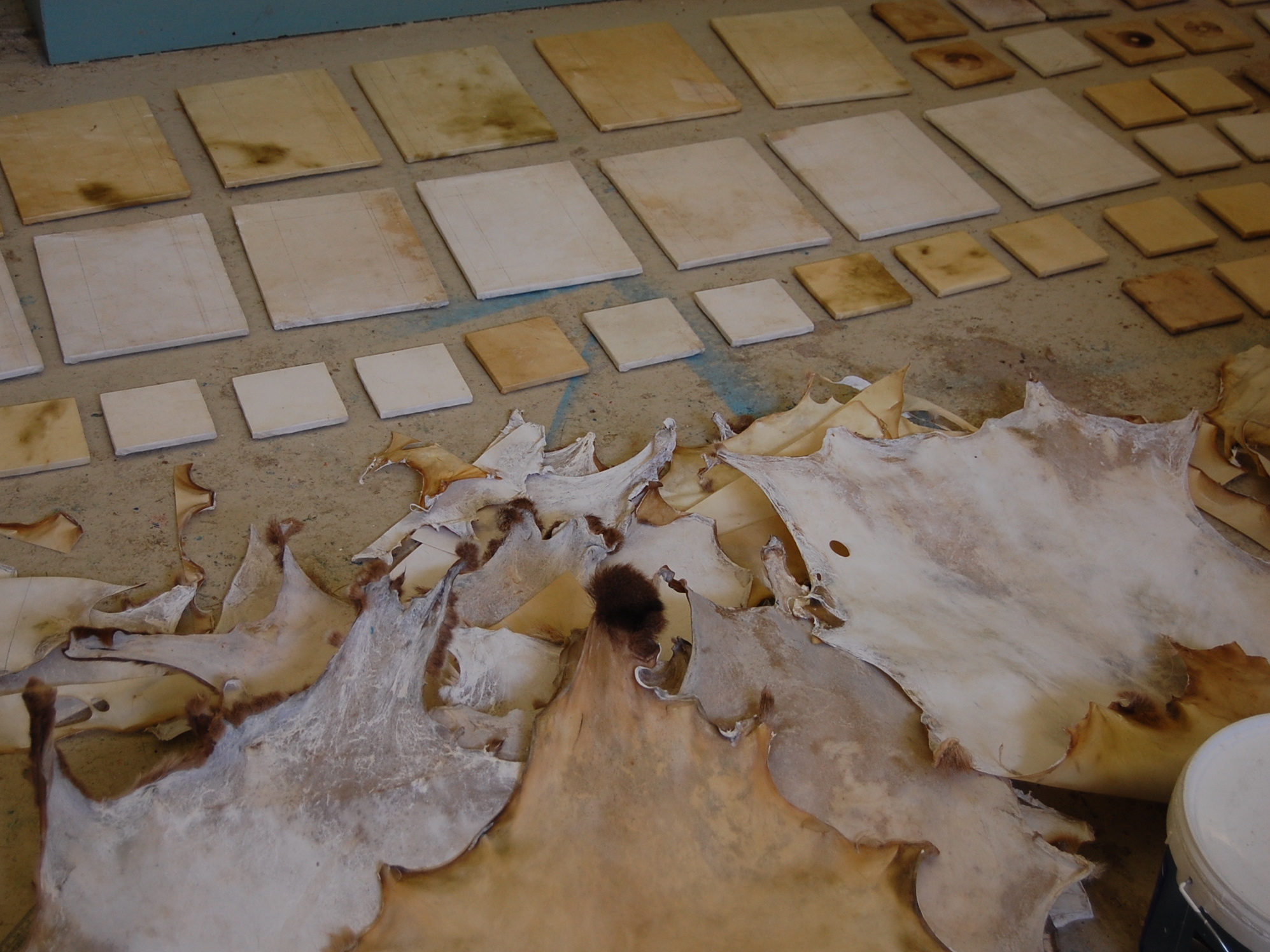 Mattias Jones created this giant line drawing in November 2011 for an exhibition in north Wales. It was inspired by the Dark Mountain Project and by a real dark mountain – Cnicht, in Snowdonia. Matt later recreated a version of this image for the cover of Issue 3. 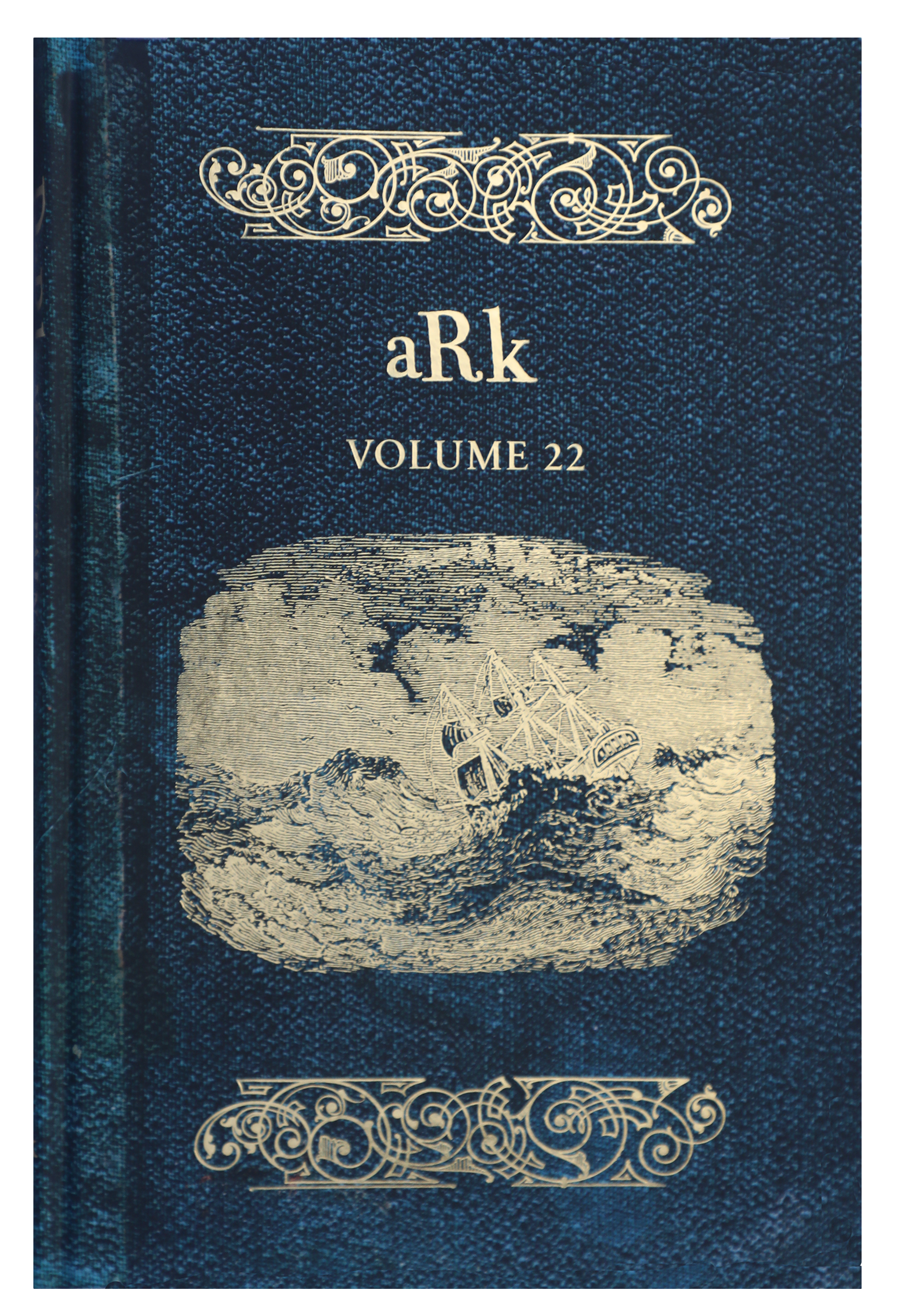