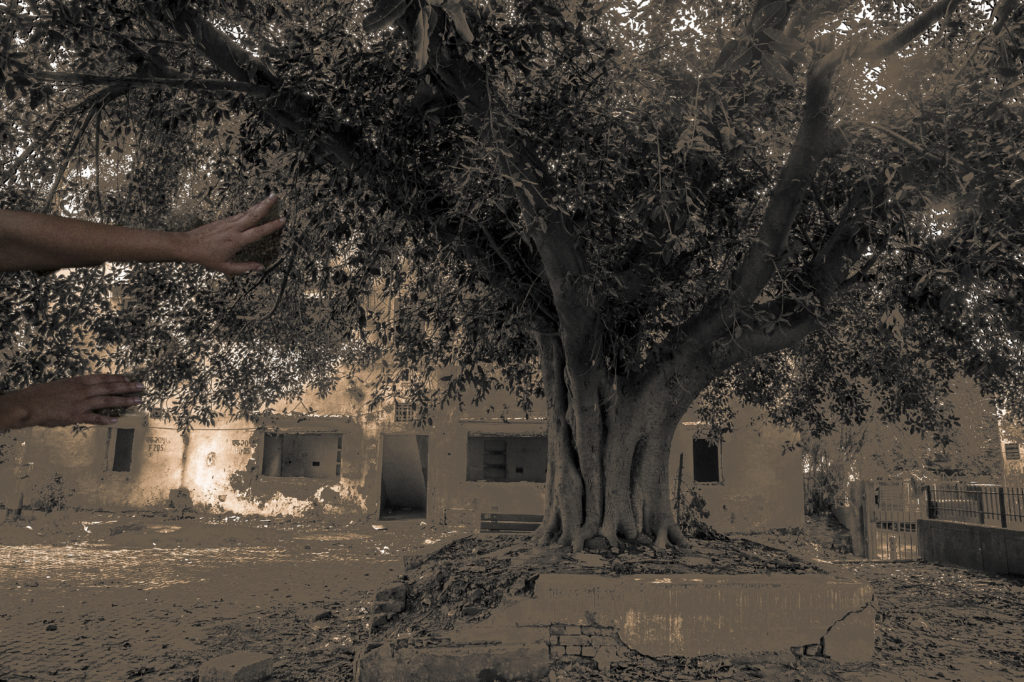 'We try to protect the condemned houses, trees and memories of Netaji Nagar, Delhi.' Image by Juhi Saklani. '
Juhi Saklani
is a Delhi-based writer and photographer. Her articles on contemporary life and culture have been published in leading Indian newspapers, magazines, and online platforms.
Share
Felled trees lie on what used to be the children’s playground. The low-rise houses near which they lived stand abandoned, their doors and windows removed. A tree stump has been painted by a local student who is still taking faltering steps in learning the English language: ‘Murdure’ it says. ‘Why did you cut me, I only helped you breathe’, says another. The neighbourhood of Netaji Nagar is not a residential area anymore, but it has become a protest site. Not too far away, a whole new residential complex has sprung up on a similar patch of land, indicating Netaji Nagar’s future. It is a densely packed heat island of high-rise concrete towers, all its old mature trees lost.

These days, in Delhi, we are being asked to choose between trees and housing.

Under a central government project, about 16,000 healthy trees have been proposed for felling to ‘redevelop’ old housing colonies. The redevelopment envisages densely packed multistorey housing for government employees, a World Trade Centre, giant commercial and office complexes, and underground parking for 70,000 cars. The last bit means that no trees except ornamental palms and shrubs can be grown in these complexes, which currently host a wealth of 50-80 years old banyan, peepal, pilkhan, amaltas, semal, neem, mango, jamun and more.

In the face of protests from a city of tree lovers, parents worried about air pollution, and critical environmentalists, the authorities went to work projecting what was essentially a real-estate development plan as a housing project. ‘Redevelopment cannot happen without either cutting or transplanting trees,’ said the chairperson of NBCC India, the company spearheading the plan. ‘Do we want people to live in slums?’

Yet again, I find that we have came back to the ‘development versus environment’ trope, in this case in the shape of housing versus trees.

From India’s much-respected and long-standing anti-dam movement to save the river Narmada, to villagers protesting a nuclear power plant in their backyard, to tribals protesting against mining in their sacred hills… this exhausting discourse has been haunting us for years. In a country with large numbers of poor and underprivileged people, so emotive is the tug of ‘development’ – a catch-all term for massive construction, bringing in foreign investment, starting industrial or business ventures, or generating employment – that it is possibly the most favoured word in political discourse. ‘We will usher in an era of unprecedented development..’ ‘There was no development when the other political party was in power…’ ‘Elections should be fought on issues of development…’

The ‘environment’ has emerged as the lexical and conceptual enemy of this panacea of development. Environmentalists are projected as romantic fools who have no understanding of the realities of life, as alarmists, or – at worst – as people with some hidden agenda of derailing the country’s progress.

In conversations around ecological issues in India, the core problem always crystallises around ‘development versus environment’. Where does this absurd dichotomy arise from? Which human being does not need shelter and good health? Why would a society not equally need clean air and water, a sense of economic security as well as quality of life — and how would we define this economic security or quality of life? Is there even space across these battle-lines for discussions on birds, small mammals and the biota of the area?

Trying to photograph an ad hoc shrine flourishing under a banyan tree in Netaji Nagar, one of the colonies slated for demolition, I simply sit for a moment, rendered blank by the monotony with which yet another ecological issue has been reduced to the same tired old trope. A friend has sent me photographs of sunbirds, parrots and monkeys from this area. I have met locals who nostalgically told stories of making pickles from the mango trees planted 30 years back, of boyhoods in which seasons were known by the names of the fruits that ripened in them.

Now I watch the monsoon rain seeping into my skin. I remember the many people who have unselfconsciously hugged and kissed these trees during the campaign, gathering gnarled trunks to tremulous cheeks, closing their eyes and pouring their heartbeat into the wood.

This rain, this rough bark, this something called ‘nature’, does not feel like it is outside of me, who am something called ‘human’. The more I read, talk to people or photograph, the more I realise that the human sphere and the sphere of nature belong to so enmeshed a whole that they cannot be separated at all. Skies constitute our eyes, our nerves transmit rivers.

As the redevelopment issue is being debated in the High Court of Delhi, I make haunted images of trees emerging from the human documents and repositories of our lives: letters, books, homework notebooks, newspapers, maps, houses. I place a defiant young shoot, growing out of a chopped tree stump, on a newspaper that reports the steady loss of trees. I protect the old condemned houses with my hands. I take solace in the magnificent ficus roots that grow out of any old wall or building they can. I hope that these photographs can be my limping alphabets for a sovereign language that seamlessly integrates our humanity and our natural selves.

For the moment, those trees are still standing.

This work has been made possible by the Photosphere fellowship grant from India Habitat Centre, New Delhi. 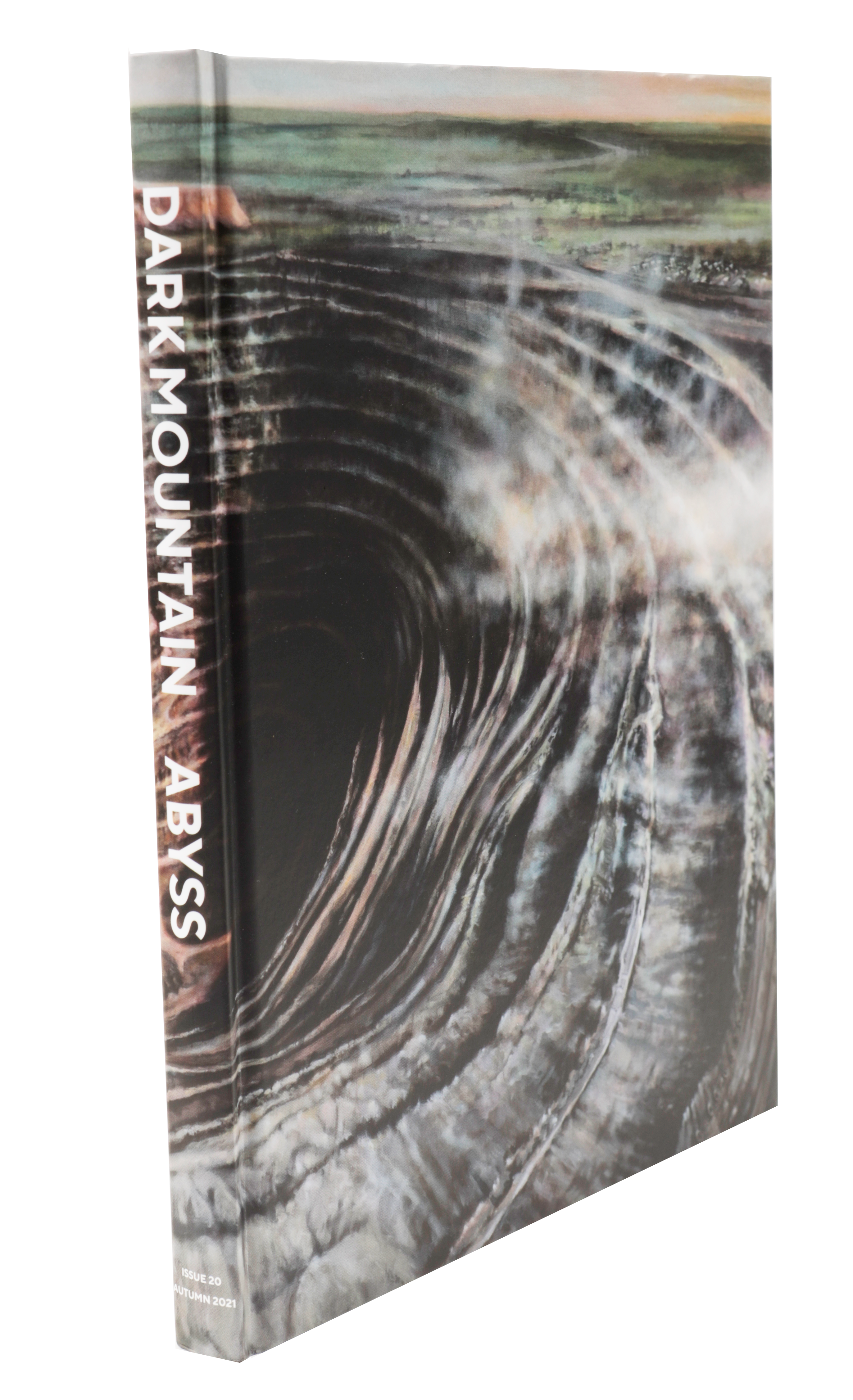