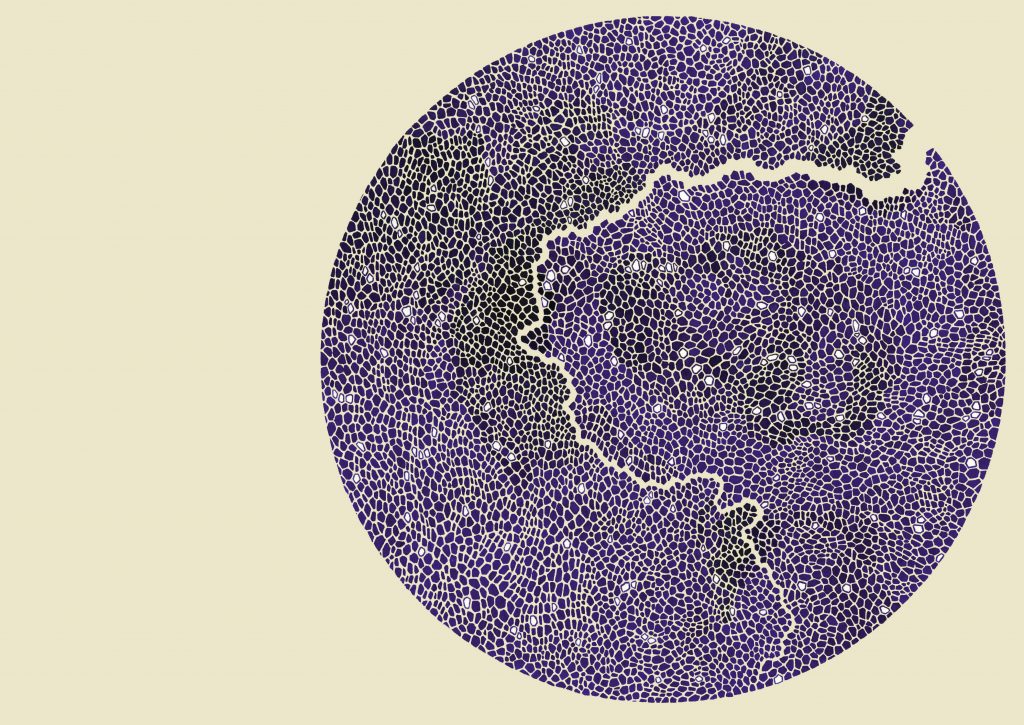 The Greek philosopher Heraclitus used a term to explain existence: panta rhea, ‘everything flows’. Things and people never are, but are always ‘becoming’. Yet constant change is disturbing to human minds caught in dualities, and, when threatened with upheaval, many of us seek refuge in illusions of stability. According to Heraclitus this is a fool’s errand – like flowing water, we are always ‘coming to be and departing’. Everything is in flux, nothing in existence stays the same: ‘It is impossible to step into the same river twice.’

Two and a half thousand years later, the botanist Robin Wall Kimmerer described the ‘grammar of animacy’ running through the Potawatomi language. The word ‘bay’ is not a noun, something fixed, but a verb – wiikwegamaa, ‘to be a bay’ – with the implication that ‘for this moment, the living water has decided to shelter itself between these shores, conversing with cedar roots and a flock of baby mergansers. Because it could do otherwise—become a stream or an ocean or a waterfall.’ All are possible verbs, she writes, in a world where everything is alive.

To the Western rationalist mind, this can be slippery, hard to grasp. The extractive civilisation currently laying waste to the planet not only depends, in large part, on denying the animacy of anything that isn’t human, but also on fixed, stable states and tidy definitions: human and animal; civilised and wild; animate and inanimate; subject and object. Yet ironically this culture’s actions are making reality ever less stable, as the composition of the atmosphere changes and the very fabric of life unravels – inviting another, darker ‘becoming’ that imperils our own survival. That is one of the human dilemmas we explore in this book. How do we learn to merge with and adapt to what threatens to undo us?

How do we learn to merge with and adapt to what threatens to undo us?

Dark Mountain’s 21st issue takes its inspiration from confluence: the act or process of blending together; the meeting of two rivers. The image of watersmeet, archetypal and evocative, can be found throughout the book, but we also sought writing and artwork that goes beyond watery metaphors and investigates confluences that happen at other levels.

From the United States come modern-day lycanthropy tales, convergences between human and animal. This merging of realities is reflected in Esther May Campbell’s photographs of children and animals overlapping at dawn and dusk, meeting spatially but not temporally, while the artwork of Gustaf Broms collides the human with the arboreal. In Jane Smith’s decidedly urban story of a pigeon trapped in a supermarket, we see an example of a synanthrope, an animal that has adapted to the human environment. Such inter-species minglings have the effect of breaking down boundaries, but they also have affective impacts that run in the other direction, reminding how far we have removed ourselves from all that is wild – and with what consequences.

There are human confluences here, too: between generations, between conceptions of relationship and between epistemologies. One short story observes the interchange between two individuals from the locked-in viewpoint of an elder whose brain injury leaves her unable to communicate verbally with her adult daughter, yet radically open to the more-than-human. Wren Schulte follows a river back through time in search of ancestors who can bear the weight of intergenerational trauma, while elsewhere we are introduced to oddkin relationships that defy the usual social categorisations. An interview with the writer and critic Minna Salami opens up the perspectives of intersectional black feminism on knowledge and environmental breakdown, and explores the generative possibilities of learning to think with rivers.

We bring you dispatches from far-flung locations: from squelching Panamanian swamps to an Alaskan mountain range – and from there to the icy moons of Jupiter. From Ireland, Kate Moore introduces us to the ‘geomyth’ and points in the landscape that, like axis mundi, join the present and past to the mythic, this world to the Otherworld. Meanwhile in Antarctica, with the ‘Doomsday Glacier’ on the point of collapse, Stephanie Krzywonos explores the ruins of Cold War dreams to bring nuclear power to the so-called ‘last great wilderness’. The idea of disastrous nuclear convergence is also broached in Jonathan Travelstead’s poem about the ‘liquidators’ sacrificed in the Chernobyl clean-up attempt, and in Oliver Raymond Barker’s photographs of the land around Britain’s only nuclear submarine base – images brought to light by a backpack-mounted camera obscura.

Other contributions to this book delve deep into the human body. From a ramshackle farm in New Mexico, Steven Morgan asks tricky questions about health and death through his journey with autoimmune disease, and an interview with Sophie Strand reveals the human body as a microbial ecosystem, an interstitial web of life that, in its interconnectedness, reflects the mycelial intelligence of trees. On a microscopic level, the individual breaks apart: our ‘selves’ are swirling convergences of bacteria, yeasts, fungi and innumerable other organisms without which not only would we not be alive – we would not be at all.

This book itself is a confluence of sorts. A number of pieces in these pages originally appeared in saltfront, an environmental humanities journal founded in Salt Lake City, Utah, inspired by Dark Mountain’s early work and dedicated to a radically new type of ecological storytelling. Editors Eric Robertson and Michael McLane, respectively based in Utah and in New Zealand’s North Island, joined three Dark Mountain editors scattered around the south-west of England, working across different time zones and different ecologies. Such a collusion was only made possible by the techno-confluence of the internet. On the surface, this might sit strangely with our focus on the rooted and grounded, but such contradictions are embedded in the reality we live in. Part of this book’s intention is to steer away from fixed positions — the false certainties of ‘saving the world’ narratives on one hand and ‘we’re doomed’ on the other – and to navigate the trickier currents found between the two.

Hanging over all these pieces is the inescapable reality of the confluence of catastrophes we face: climate, ecological, political, cultural and existential. ‘Collapse’, as Sophie Strand notes, ‘is when things that shouldn’t be connected merge.’ As the converging viral streams of the Covid pandemic show, connectedness is not necessarily ‘good’, whatever new age platitudes of oneness and wholeness might suggest. The climate disaster unfolding around us is itself a convergence between the breakdown of ancient organic matter and modern industrial ambition, technology, greed and carelessness, a calamitous meeting of worlds.

In this planet-wide collective derangement, as certainties warp and melt away, we are given a vision of our own bewilderment

This is eerily reflected in Ceda Parkinson’s dreamlike short story about the moon being drawn into collision with the Earth, an orbital coming together that produces ever stranger behaviour in those helplessly watching its approach. In this planet-wide collective derangement, as certainties warp and melt away, we are given a vision of our own bewilderment, as disparate channels flow into each other and catastrophes impend. In the white noise of this chaotic merging, do we try to find solid ground, to hold fast in the roiling current that threatens to carry us away? Do we attempt to dam the tide? Or do we look to Heraclitus’s panta rhea, ‘everything flows’, as we try to navigate down the unknown river?

In the spirit of confluence, there is no one answer. But we hope the contributions of the 60 writers and artists in this book join to make new patterns in this meeting of the waters.

Please join us for the online launch of this book on Thursday 21 April at 7.30pm BST. The event will feature a confluence of writers, editors and artists, with readings from selected pieces, a presentation of the book’s artwork and time for questions and conversation. It’s free, but you need to register here. 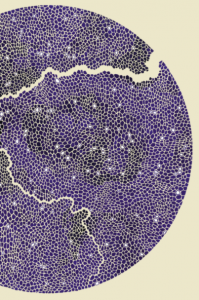 This ink piece was created through the repetition of simple motifs, allowing the form and character of the image to arise organically. It is at once a map, a meditation and a mandala; an expression of, and for, the wandering pen and meandering mind.

Meander (verb): to follow a winding or intricate course //to wander at random

Meander (noun): a turn or winding of a stream //an ornamental pattern of winding or interlocking lines

Cecily Eno is an illustrator whose intricate, suggestive designs focus on interplay and connection. Her drawings – while fictional – are curiously familiar; reminiscent of anything from microscopic cell structures to galaxies. Change, habit, evolution and relationship are explored through the meditative drawing process, where thought patterns compound into visual patterns.

Dark Mountain Issue 21 will also be launched online this week. Come along and meet the editors, contributors and artists at our book launch at 7:30pm (BST) on Thursday 21st April. See you there!