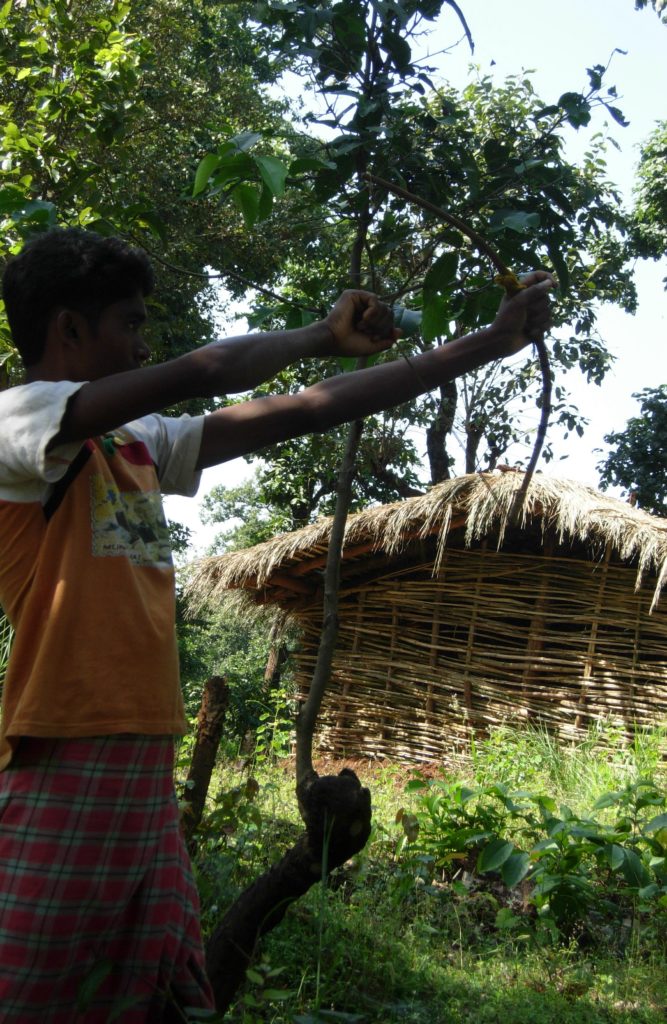 Aiming in the foliage (photo: Narendra)
Narendra
Narendra's association with the indigenous communities of the Abujhmad region of Bastar, Central India, goes back over 30 years. His dispatches are published as an occasional series on Dark Mountain.
Share
It was the season of the rains. A strange mist and haze hid the hills, their contours visible but faintly. Rains had that strangeness which I had not known prior to coming to Abujhmad. Like sunlight, like darkness, the rains envelop the human body without, in a manner of speaking, touching. Such was the softness. For days on end, the rain fell as the tiniest of dew particles. It rarely poured or thundered. Sunlight, dark and rain had the same un-solidity about them. Like the breeze, the rain was simply there – undeniable yet unprovable; there, like the hills, visible yet not so. A strong suggestion of the thing but not the thing itself. It was the same with life too. Without certainty, it was of some intangible tentative. The landscape and ambience suggested that it could be this, that, both or none – and yet it was something. Such was the strange magicality of the place. Such that it may not be talked of. For four months, mist shared the jungle with sunlight and dark as one and the same.

It is such misty rain that enables shifting cultivation – and much else. After the seeds are broadcast on the ash bed (digging and upturning the earth is considered evil), the soft rain particles help them to embed. When a shower follows, instead of being washed down the hill-face, the seeds stay firm. Then everything else stays firm. With fallen leaves and dried grasses, the jungle is feeble and brittle after the hot summer. The gentle mistiness restores it to life imperceptibly – as all is imperceptible and soft in the jungle. Rivers and streams rise imperceptibly till stronger showers come, restoring the jungle to its beautiful and intimidating grandeur. For the greater part of these four months, the green becomes greenest. The other seeds sprout, too, fallen as they have within their botanic family circles. Elders help their offspring towards the sun, providing shade and moisture.

I had already gathered new thatch for the roof before the onset of the rains. The elements and termites had had their way, and I knew it wouldn’t last another monsoon. Jooroo and Sukoo helped me spread and fasten the new thatch. When the first rains came, I knew it would hold good for another two years. With the loosening up of the earth I was also able to repair the bamboo fence, which was tilting in places. Fencing does not mean ownership but well being within the enclosed area, which is why each structure has a fence, even the pig sty. New poles with stones and pebbles at the base would support it for another couple of years. It was also the time to sharpen the axes, knives and arrowheads; or embellish their wooden handles with burnt designs in the fire. I had only an axe, which I sharpened frequently. On its handle were designs made by Chaitu. The monsoon season was also the time for fixing new strings to bows, and for getting a haircut if you needed one.

It had been raining continually for four or five days. The earth was muddy, slippery in places. But that did not stop the dogs, cats, goats, pigs and the young girls and boys. Naked, all scampered around with zest and gusto – as did the occasional adult or two. No one was afraid of hurting themselves. Only the poultry and I looked dull. Like them, I did not much like getting wet.

Sukoo and I walked along the trail silently. Trails are ever silent. It is good to not infringe upon them more than absolutely necessary. Only sometimes did we talk to each other, and even then it was more to warn the animals that humans were on the move lest they be taken by surprise and attack. Their hideouts waterlogged, the animals take to the trails where the clearing, less than two feet wide, is free of grass, shrubs, leaves or insects to bother them. During the rains, there is an insect larger than a big fly that bites the animals hard. It is particularly punishing for those with little or no fur, like the cattle – and humans, of course. Then there are those tiniest of winged ones that hover millimeters away from the eyes – it’s hard to keep your eyes open; you have to keep blinking to keep them out. Sometimes you have to resort to wearing large sihadi (vine) leaves in front of your face. But then one cannot see much or walk properly. A single sihadi leaf is so large that it can cover nearly half of your body. They are also used as umbrellas during a shower.

Like all trails in Abujhmad, this one too was meandering and endless. As if trails are created for wanderers who have all the earth’s time and no business to conduct. While Sukoo walked ahead, I followed with a bamboo basket, in case we came across crabs or bamboo shoots. There were enough patches of mud and slush to walk on, but still we were cautious of tigers, leopards, bears, boars, snakes, large black scorpions and others. On meeting a human, each has a different response and one has to be prepared. The dew was falling and, except around the waist, our bodies were humid. We must have walked over a kilometre and a half. The sky was steady; clouds no darker than they already were.

As we turned a bend, Sukoo froze in his tracks; he lifted his nose. I could guess what he was sniffing for. There was a tiger’s pugmark in the thick slush, larger than an adult human palm with fingers spread wide. Five toes and four sharp claws, each about four inches long, it was the front paw of a full and strong adult (rear paws have only four toes). Each toe and claw was pressed firmly into the soil to give a good hold in the slippery mud. Impressions of animal paws were not uncommon; one came across them from time to time on a dusty or muddy stretch, often by the side of a watering hole or a river. This one had fresh and tiny bubbles on the surface; they were coming up and bursting, barely a metre or two from where we stood. In the moisture-laden, heavy air we could not smell its foul odour. Apparently it had not heard our intermittent voices as we walked along. If it had, being a shy animal, the tiger would have walked away from the trail into the vegetation. It was as unaware as us that we were so close. Had it turned its head even for a moment, it could have been catastrophic. Crouching down and with a stunning burst of power, a tiger can leap, puncture the throat and fasten its jaws around the head. In a matter of seconds, the world goes black.

Tigers like to be left alone, and are particularly irritable in the rains. Their primary concern in the jungle is their own safety. In Abujhmad, they are not man-eaters but they have been known to kill; particularly mothers with cubs who accidentally come across humans. In panic, we froze where we stood. We did not try – nor did we wish – to see it. That gave the animal time to put some distance between us. Not a word was exchanged: our throats had dried up even in this moist air.

Moments passed. We could not hold out longer. We quietly turned and walked back towards the village, treading as softly as the rain particles. Though sometimes fatal, the twists and turns of trails saved us from much that day. Some ancestor must have dwelt at the bend. It knew.

The Digital Back Catalogue: Issues 1 to 13 (PDF)

A complete collection of Issues 1 to 13 of Dark Mountain in PDF format.