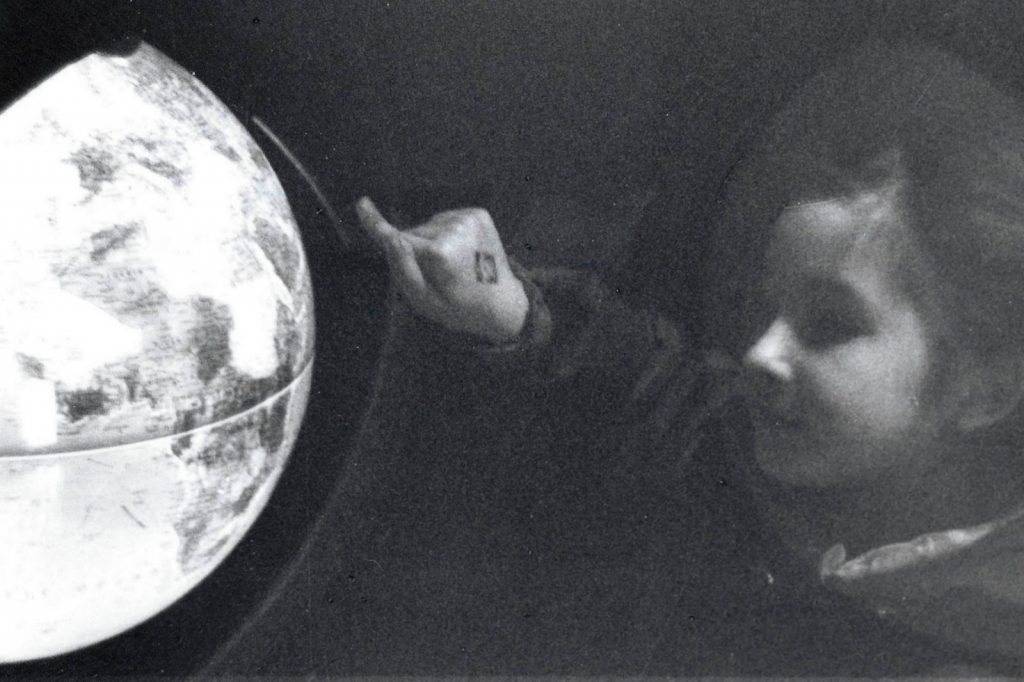 Liz with globe (photo: Brian George)
Brian George
is the author of two books of essays and five books of poetry. His book of essays Masks of Origin: Regression in the Service of Omnipotence has just been published by Untimely Books. He is a graduate of the Massachusetts College of Art, an exhibited artist and former teacher. He often tells people first discovering his work that his goal is not so much to be read as to be reread, and then lived with.
Share
There was a point towards which the centuries converged
– Omega, the Social Darwinist perfection of the race, the Marxist Workers’ Paradise, the global triumph of Neoliberalism, the mapping of three billion base pairs of DNA, a leap into the Noosphere, the extraction of the last ounce of tar sands from the Alberta/Saskatchewan border. We have entered through this point with some few of our contemporaries, we who are still halfway in our bodies. We have entered without knowing that we entered. We have woken up beyond it. Fear proves of little use, but neither does it lull us with inaccurate information. To find our hands is difficult. The sky rings. Our eyes just barely work.

Setting aside all linear stages of development, we should perhaps construct our theories as a kind of open house, like a tent, inside of which a nomad spreads a wonderful flying carpet. Let us revolutionise our use of the word ‘present’. Let us go to the New Earth. We, the bankrupt heirs of the decentralised plutocracy, would then find that we had also become nomads, that we could not seem to remember when or where we left our homes. Confused by the silence, we would discover that our TVs had long ago revolted. Outside, when the sand shifted, we would be able to see the broken walls of a metropolis, once called great, which would be only the topmost of at least a dozen layers. The host would request of the gods, ‘Relax. Make yourselves comfortable’. Stories would elbow each other aside to find a place in the poet’s mouth. The dead would be invited in for a steaming cup of tea.

The structure would provide provisional protection, the appropriate amount of light, and even, if placed well, some access to a primal source of energy, to a force whose name we had buried in our dreams. If our vortices were closed, we would one day find them spinning. New dimensions of hunger would seize our basal ganglia. Lack of food would be the least of our concerns. The knowledge printed on the wind would provide us with fresh manna. Birds would drop near our flaps with cookbooks on their feet. Supplies of drinkable water would be adequate enough, but we would once more have to learn how to dowse for living mercury, how to transform the dry landscapes of our bodies into maps. When fallout blew from the shell of a destabilised reactor – or with some luck, a few weeks before – we would know that it was time to go. Having served its purpose, the open house would then be folded up, to be carried to a fixed but still unknown destination.

In this none-too-solid world, past and future would meet at sunset to transform the human heart

Reefs would die. Auroras would be seen as far south as the equator. A pandemic of epilepsy would take apart most coasts. There would be no petroleum left to be extracted, and the last flames would have ceased to shoot up from their wells. The air would be somewhat cleaner. There would be no lines at the gas pumps. In this none-too-solid world, past and future would meet at sunset to transform the human heart. Lost technologies would flow into the spaces cleared by accidents. Our open house would carry its own weather system with it, with sunsets that would not be all that difficult to schedule, with winds swarming with the flutes of other-than-human players. Messengers would bring flowers, to be burnt. A black cat would wander out with a look of expectation. No longer would Necessity be the sole Mother of Invention. Mnemosyne would return out of the depths. She would hug her overworked sister. Transported by her carpet, a telepathic child would fly to the horizon, on whose lip she would dance. Disassembling her own bones, she would use them to cast oracles. By this means, she would determine the next site for the tent.

Only the subtlest of evidence would mark the tribe’s migration – a small school planted here, a tradition floated there. We would once again have a good view of the stars. We would greet our prenatal ancestors. We would take our mummified descendants from their jars. The world would be almost perfect. It would, with a few small adjustments, soon be fully so.