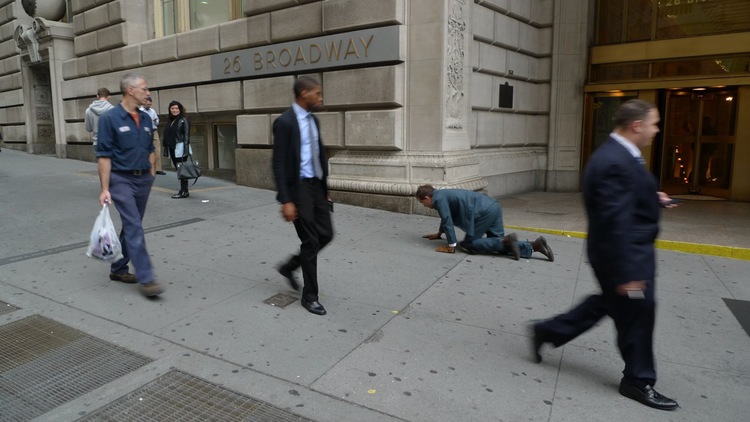 Outside Wall Street )photo: Teddy Jefferson)
Robert Leaver
is a writer, musician and performance artist who splits his time between New York City and a piece of wild land on a dead end road in the Catskill Mountains.
Share
I am alone and having second thoughts. Wearing my father’s pinstripe suit from the ’60s, vintage, rumpled, a little big on me and worn out, like maybe I got it out of a box at the Salvation Army.

Waiting for my wingman at the very bottom of Broadway. This route was once a game trail that wild animals ran on, then a hunting path for indians, then a muddy dirt road for the white man. Now this. It would be so easy to not do this. I’ll bet the guy who walked on a tightrope between the twin towers felt that way. But what he did was so brave, so exciting and risky. It was the opposite of this. Can crawling be brave? I am crawling from the bottom of this island all the way up Broadway to my home in Washington Heights. Why am I doing this? Suddenly I can’t remember.

My brother called me as I walked south past Wall Street and he asked me not to do it. He sounded worried and that’s unusual. At moments like this I realise he’s getting older and supposedly I am too. He’s making sounds like this crawl might be a sure sign that my unraveling is finally at hand. I’ve done plenty of weird things in public and everyone knows I don’t embarrass easily — but somehow this one is giving people pause.

I imagine if you don’t live in Manhattan crawling up Broadway could seem sort of self destructive. It’s true, I could get vomited on, or kicked in the face, or spit on. An insane homeless man limps by me now with bare torn up feet, muttering to himself, stabbing at the air with his hand. He might jump on my back and try to ride me. I see construction workers who look sort of drunk on the sidewalk smoking and spitting and cat calling at passing women. What will they say when I crawl by? Then again maybe the person who is dangerous is the one who is crawling.

Teddy, my wingman for the day, arrives. He’s got a camera. He’s hip, low key and alert. He checks out passing women as I put on the knee-pads.

I need to start. I need to silence these doubting voices in my head. Is this just self abuse? Is this just me being bitter or wanting attention? No. Fuck that. This is an offering. A loving gesture to my fellow man! My sense of why I’m crawling flickers in and out of sight inside my head.

Can something be profound and pathetic all at once? Of all the things I could be doing with my time. This is lame.

I put on my gloves, worn leather work gloves from upstate stone walls. I want to make sure I don’t panic and crawl too fast. I don’t want to meander or crawl too slow. A confident purposeful crawl seems like the way to go. I guess I’ll know it when I feel it.

People are starting to get out for lunch and fill the sidewalks. I take a breath and take a look up at the overcast sky. Deep in the financial district. I get down on my hands and knees and nod to the earth beneath me. I start to crawl.

Deep in my subconscious an alarm sounds telling me that I am in trouble. It’s not right to be down here like this. Adrenaline is released and I get a surge of energy. It’s harder than I thought, physically, like little pushups. The movement torques my core. It feels wrong on so many levels. I’m vulnerable and claustrophobic. A voice inside says get up. Walk. Don’t’ crawl. Stand. Don’t crawl. Run. Get up! Fight! But I stay down and climb the flat sidewalk forward.

I can’t really see up ahead unless I stop and twist my neck. My wrists are going to be sore. I should be using my fist knuckle, like an ape. I can tell this flat palm method will strain my wrists. My kneepads are slipping and my knees are on their way to raw and I haven’t even crawled a full block. I try to concentrate on my pace and hug the right side of the sidewalk, out of the way of the main flow. Some pictures get taken. I feel like a dog and a clown and holy man.

A young cop leans down into my vision and his voice is genuinely nice and concerned. ‘What are you doin?’

‘Personal project,’ I say, like it’s nothing to worry about. I keep moving. I’ve got it under control.

‘OK.’ He says and that’s it. He disappears. I was going to say ‘private challenge’ I think that might have worked too.

Nobody says anything to me for a while. I hear people take pictures and make sounds about the guy on the ground, but nobody engages with me directly. Nobody asks if I’m okay. I wasn’t hoping they would. But still… I must seem like I’m OK.

My crawling form must make me look like I don’t need help. I take a break on my knees and trade a nod with Teddy, then I keep going. I look down, 18 inches or so below. It’s like a view from a plane as I pass over black smears of dry gum, tiny lakes of spit, cigarette butts, and wide pristine plains of smooth cement.

After a while I stand and a uniformed doorman asks me how I’m doing. I tell him ‘I’m crawling home to Washington Heights. Something I’ve always wanted to do.’ His eyes get wide and he nods. He sort of likes it, or gets it, or maybe he’s pleased to have a new story to tell his family tonight at dinner.

I realise that like walking you can crawl as if you know where you’re going, like you mean business, like you might not be someone to trifle with. Even in this defeated position one can project strength.

I feel like a fish, a man salmon swimming up this concrete river of commerce, indifference and pain. Up Broadway I go to spawn and die.

It is lonely down here on my hands and knees in the Canyon of Heroes. Huge parades came through here. I wasn’t expecting to feel so lonely. Is this an act of desperation? There is desperation in the air. Does that make me desperate? Voices in my head told me to do this. Since when did voices in your head get such a bad rap? Maybe I’m praying. Maybe this is a meditation, or a migration. I am going home. 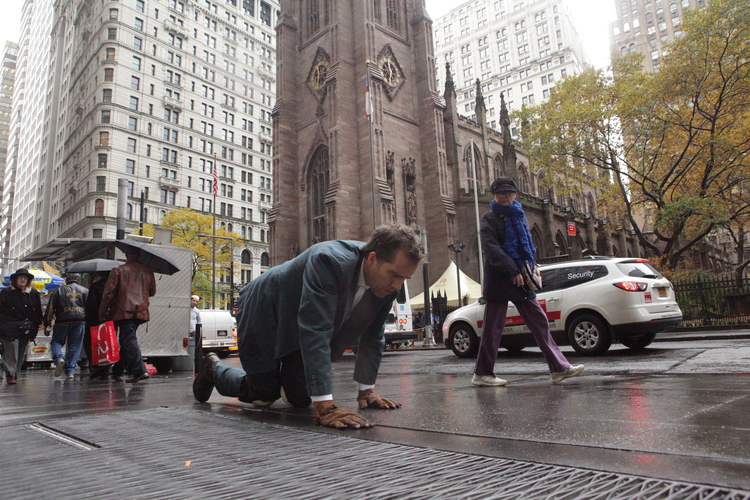 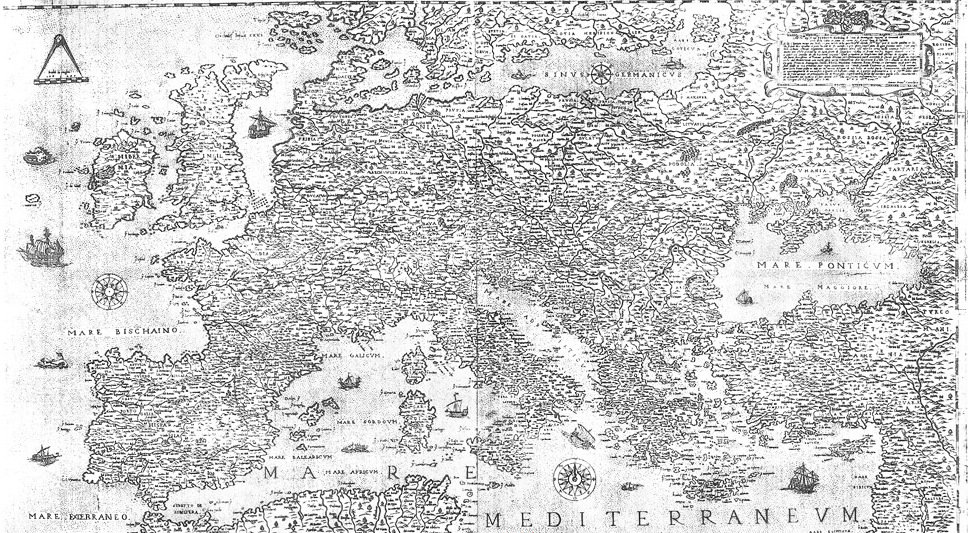 The Height and the Drop

The Editors
Since the Dark Mountain Project was launched in October 2009, the distance between the height and...
Dark ThoughtsDark Verse 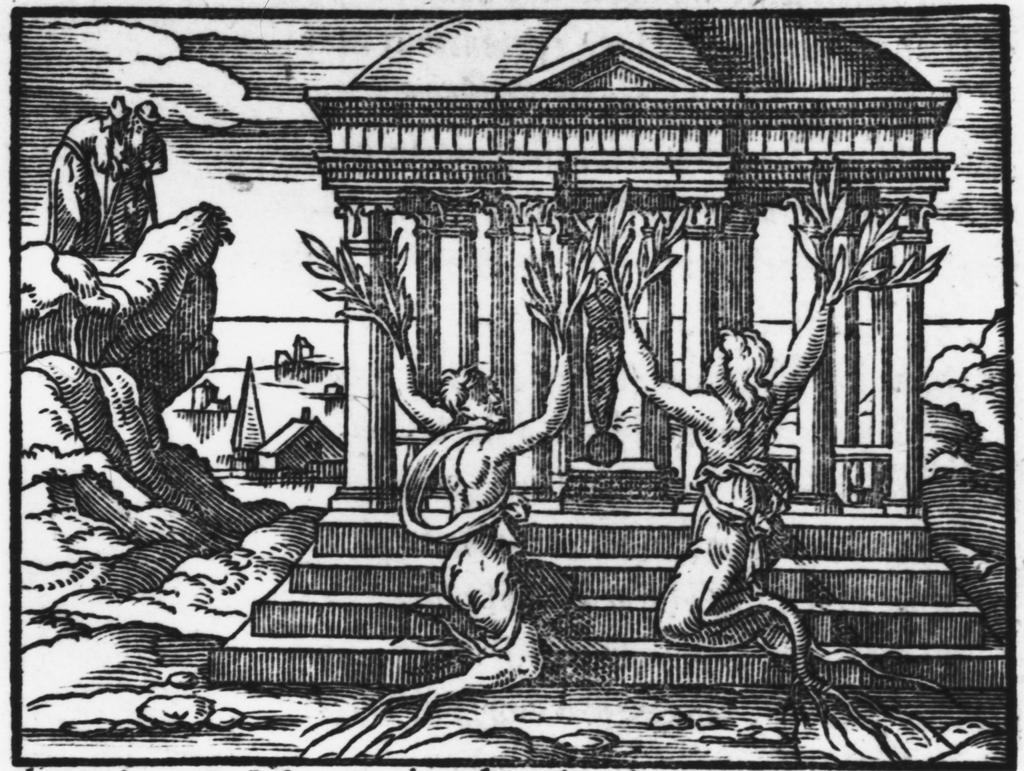 Baucis and Philemon in the 21st Century

Christy Rodgers
On childlessness, and living small, in an age of endless expansion.
Journeys

Paul Kingsnorth
This is nonsense, of course, and the process of creativity demonstrates it well. One...
Call outs