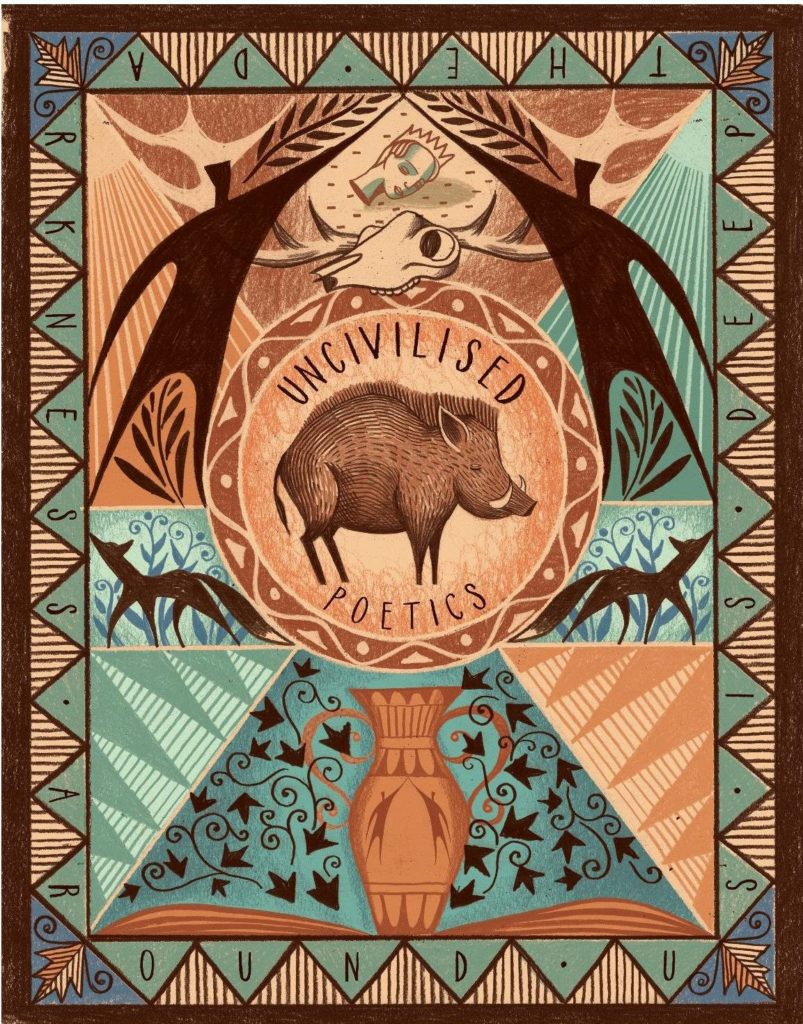 Cover design by Nick Hayes Crayon 'I was given two poems to work from for this front cover, each telling a story of the importance of poetics in the wake of a devastated environment. I wanted to draw an image of time passing, the sun and the moon, the cold spring and warm autumn colours, and give an idea of nature flourishing through the ruins of civilisation. The image of the two silhouetted characters is meant to suggest the function of storytelling, providing a line of communication through past time. And the severed statue head and the Greek urn were references to Shelley and Keats respectively, and their words on poetics and the fall of civilisations.' Text from 'A Ritual to Read to Each Other' by William Stafford.
The Editors
Share

What mad pursuit? What struggle to escape?
– John Keats, ‘Ode on a Grecian Urn’

When the forms of an old culture are dying, the new culture is created by people who are not afraid to be insecure
– Rudolf Bahro

There’s something dishevelled and unsettling about poetry. In 2016, at a time of escalating global violence and uncertainty, poetry might seem irrelevant. What’s the point of poetry when the streets of Syria have been bombed beyond recognition? What’s the point of poetry when the permafrost is melting? But poetry matters because it offers an alternative reality – it refuses the logical, reductionist, materialist aspects of industrial culture; aslant, it invites us to feel our way in the dark. And most importantly, it matters because it often fails. Poetry often fails to speak universally, but succeeds in trying over and over again to speak. Poetry is a shabby, uncivilised failure that we badly need in these unravelling times; if for no other reason than as a mirror for our human imperfection.

American poet Adrienne Rich, in her anthology Arts of the Possible: Essays and Conversations (2001), asks ‘what kind of voice is breaking silence and what kind of silence is being broken?’ In this tenth Dark Mountain anthology, our second themed publication, myriad voices continue to break silence on the crumbling narratives of our time: ecological, social and cultural. Many ask what it means to experience a felt sense of the world, when the lives we inhabit are defined by the ‘self-congratulatory self-promotion of capitalism’, gasping against a backdrop of resource depletion. With our centuries-long reliance on logocentric thinking and being in the world, how do we feel our way to an understanding of what it means to be human today? Poems, resilient and germinal as they are, can forge a path into these questions.

It’s true that we don’t have to read poems to discover poetry, since it can be found just about anywhere. Poetry isn’t necessarily language or the construction of carefully crafted syntax and rhythm. Poetry can be found in the silence, the spontaneous images and realisations that emerge from a creative contemplation of the world: poetry as awareness or revelation, from which we gain new insight into ways of seeing and being in the world. But poems are always striving to reveal their poetry and the more poems we read, the more chance we have of discovering some. It’s precisely this chance that Uncivilised Poetics is inviting readers to take. This is an anthology of poems, essays, visual art and an audio CD, which urges us, at a time of converging crises, to reimagine ourselves and the world in which we live. As American poet William Stafford suggests, ‘it is important that awake people be awake.’

Robert Bringhurst writes about the survival of poetry depending ‘to a degree, on the failure of language’; that is, on the failure of language to try to pin down or co-opt poetry. Unlike many things in the 21st century, poetry (as distinct from poems) cannot be bought or sold, locked up or put on display. If there’s one thing that remains free of the tentacles of capitalism, free in fact from any system or ideology or marketplace, it’s poetry. Not anthologies of poetry – not even this one, uncivilised as it may be – but poetry that equates to an imaginal shift, that moment of awareness or revelation, which Margaret Atwood calls a ‘state of free float’.

In 2016, it’s true that poems, like most things in our materialist culture, have become business. Not just in the sense that publishers can make money – albeit little – out of successful poets, but in the way in which poets may be tempted to slip more and more towards a kind of formulaic writing; to produce poems which tick all the right boxes in terms of scansion, syntax and poetic strategy. These days there’s often praise for the sonnet that doesn’t put a single foot wrong, or the esoteric, perhaps hyper-intellectual poem, which only a small coterie can relate to. Not that there’s anything wrong with crafting poems – hyper-intellectual or not; the problem is the misperception that the business-like attainment of poetic craft equates to the production of poetry. Federico García Lorca suggested that ‘ability is not important, nor technique, nor skill. What matters here is something other.’ Technique and skill aside, it’s true that without that something other, poems remain at the level of linguistic foreplay, clever Homo sapiens’ system construction, the bones of something with no wind blowing through it.

Perhaps, in order to participate in poetry, we must open ourselves – writers and readers alike – and realise that poetry is accessible and alive to anyone who waits patiently, listens attentively and responds. Even the simplest poem– such as Najat Abdul Samad’s ‘If’– can uncover poetry; can, as Lorca suggested, have that ‘something other’. Reading and writing poems is a way towards discovering poetry, if we remain open, perhaps even vulnerable, in the face of poetry’s power and integrity. It isn’t that poets should stop writing poems – on the contrary – but that we come to recognise ourselves as immersive participants, writing with dirt under our fingernails, instead of as ‘poets-to-be-watched’ in a world that, frankly, has very little to do with poetry at all.

In recognition of the fact that human beings have failed to understand the axiomatic truth that we inhabit this Earth alongside other beings, we have chosen to place interrelationship at the heart of this anthology. Uncivilised Poetics is woven together to highlight the essential, relational nature of co-existence. Both written and spoken work is gathered to reflect (on) the relationship between species; between genres; between oral and literate, and between logos and mythos. In a culture which encourages the idea that humans are separate and ‘apart from’ other beings, and which reinforces an individualistic perception of being, it feels necessary, even urgent, to counter this with the reality of interrelationship. In keeping with this, we’ve chosen to honour and celebrate the original languages in which the poems were written: there are inclusions here in Mexican Spanish, Japanese, Swedish and Arabic, alongside their translated counterparts.

The Uncivilised Poetics CD is the first audio release made to complement a Dark Mountain publication. It includes a mix of well-known poems, accompanied by music and soundings (Robin Robertson; Mairi Campbell reading George Mackay Brown); fiery new poems by Francesca Beard and Mark Rylance; bioacoustics by Bernie Krause, and a sound recording by Peter Cowdrey. The audio component of Uncivilised Poetics is intended to celebrate the necessity and potency of oral poetry – not just as a reminder of poetry’s origins, but of its performative nature, a form that connects us, amongst other things, to land, myth and dreamtime. Poetry needs to be heard as much as read.

Why ‘poetics’? Traditionally, the word refers to the analysis of poetic syntax and form, linguistic techniques. But there’s an elasticity in the term that allows it to encompass both poems and poetry, and therefore both poems and other artforms. Poetics feels like an exploration rather than a presentation of creative work; there are open-ended questions inherent in its making, rather than a fait accompli assertion that here be poetry. Uncivilised Poetics because modernity and its colossal ideas are collapsing. The urn has cracked. The work gathered here explores what happens in the gaps, what shape the shards, when the world as we know it fails. A kind of kintsukuroi in book/CD form – that careful Japanese art of building a new pot from its broken predecessor; not patching back together, but moving beyond original form to one which embraces flaws, even sees beauty in imperfection.

It’s possible to arrange the work in Uncivilised Poetics into different categories: ecological poetry; socially-engaged narratives; artistic explorations into the relationship between land and body, human and animal; contemplation of the spiritual and ineffable; ecofeminist calls to act; philosophies of ‘the real story’– and none of this would be necessarily incorrect. We could talk about the way in which the contemporary nature poet is turning her attention to an ever more rapidly diminishing natural world in today’s technological, consumer capitalist era (Susan Richardson); or the way in which we have lost touch with the oral poem and its shamanic origins (Daniel Nakanishi-Chalwin). And we could talk about the radical importance of guerilla poetry in the cities (Audrey Dimola) and the mountains (Robert Montgomery). But sometimes such analysis and categorisation seem to lead us away from an appreciation of poetry, no matter what artform it arises in, towards a troublesome pinning down, explaining and controlling –precisely the opposite of what poetry is in the first place. As Bringhurst suggests, it feels like ‘one more step in reducing the world to human terms.’

Essentially, Uncivilised Poetics is a holding vessel for multiple voices, well-known and new, human and nonhuman, trying at a time of global suffering and loss, to honestly express what is. ‘Beauty is truth, truth beauty’ but that isn’t all we know on Earth and it isn’t necessarily all we need to know.

Cover design by Nick Hayes
Crayon
‘I was given two poems to work from for this front cover, each telling a story of the importance of poetics in the wake of a devastated environment. I wanted to draw an image of time passing, the sun and the moon, the cold spring and warm autumn colours, and give an idea of nature flourishing through the ruins of civilisation. The image of the two silhouetted characters is meant to suggest the function of storytelling, providing a line of communication through past time. And the severed statue head and the Greek urn were references to Shelley and Keats respectively, and their words on poetics and the fall of civilisations.’

Text from ‘A Ritual to Read to Each Other’ by William Stafford.

Nick Hayes is a writer and illustrator living in East London. He has published two graphic novels with Penguin Random house: The Rime of the Modern Mariner and Woody Guthrie and the Dust Bowl Ballads. The third book, Cormorance, will be out this autumn. His website is foghornhayes.com, and Instagram is #nickhayesillustration

You can find more where this came from in our latest book.