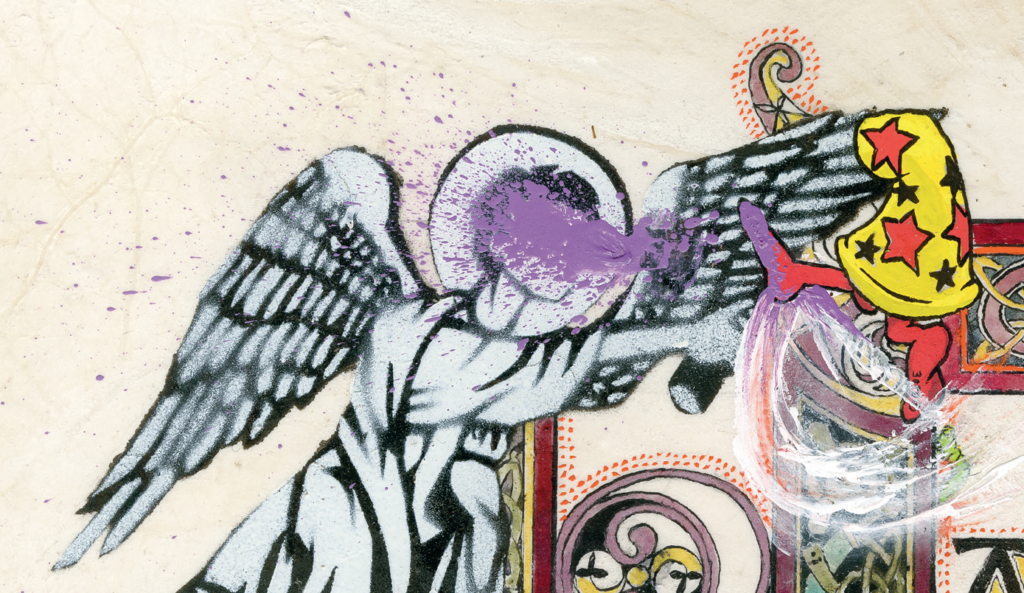 Extract from ‘The God-Shaped Hole’

We sit on cushions in a circle, about 25 of us surrounding one lit candle. Each of us is invited to place a personal object in the middle. Some put jewellery, a hat, a piece of quartz. I stay still, very conscious of being in a minority: not wearing yoga pants, not barefoot, no piercings or tattoos. I’m wearing a top from Whistles, for fuck’s sake.

I feel the stiffening in my shoulders as a wave of discomfort passes over me. My cheeks flush with embarrassment – what would the me of just a few years ago have made of this situation?

Now, I’m able to notice the discomfort, let it go (mostly), or just be OK with noticing it. I know that through the discomfort the good stuff lies. I notice my desire to stay in a safe, practical, intellectual, rigid, mask-wearing state, and I gently try to put these elements down.

The work involves sharing meaningful personal stories with each other. Gazing into the eyes of strangers. Exploring political issues that we care deeply about and retelling them from different personal angles. We’re firmly in the emotional and out of the intellectual.

This is London, days after the Grenfell Tower fire. Everyone has a lot of pain.

And when the workshop is over, back in the circle around the candle and altar of objects, we all feel connected. It’s like our hearts are bigger than they were at the start. There is an undeniable connection between all people, all life. Afterwards, it occurs to me that this is the third role of the sacred: between the sky of possibility and the ground of being held, to encourage the felt knowledge of connection.

When big events come, a hunger for connection breaks the surface of our current way of living. I remember the 7/7 bombings in London back in 2005, long before I had any interest in the sacred. That sunny day, after news of what happened spread, everyone left work early to slowly make their way home and it was inarguably apparent that we’d all go to the pub. I look at something I wrote back then: ‘In earlier days (or in America), people would have gathered their families together and prayed. In London, we got our mates together and drank.’ It was a kind of communion, I guess.

Last November, on the day we learnt that Donald Trump was going to be president, my minister opened the church for the evening. About fifteen of us sat in candlelight and shared how we felt, and a violinist played exactly the right music, and we wept. Brits, Americans, people in their twenties and their eighties, all feeling the need to be together.

On days like that, people recognise the need to be close to others, to gather together while they’re hurting or scared, for their emotions to be held in the right way, whether oiled by beer, or by candlelight and violin and the work of an experienced minister. It feels like a very basic human thing, so I assume we had the words for it long before the language of church.

Elizabeth Slade accidentally became an expert in spiritual infrastructure for the non-religious. From a career improving the way health systems work, she now wants to do the same for the spiritual health of communities. She lives in London and after 15 years is still trying to work out how her bumpkin soul can thrive there.

Dougald Hine is co-founder of the Dark Mountain Project and one of the editors of Issue 12.