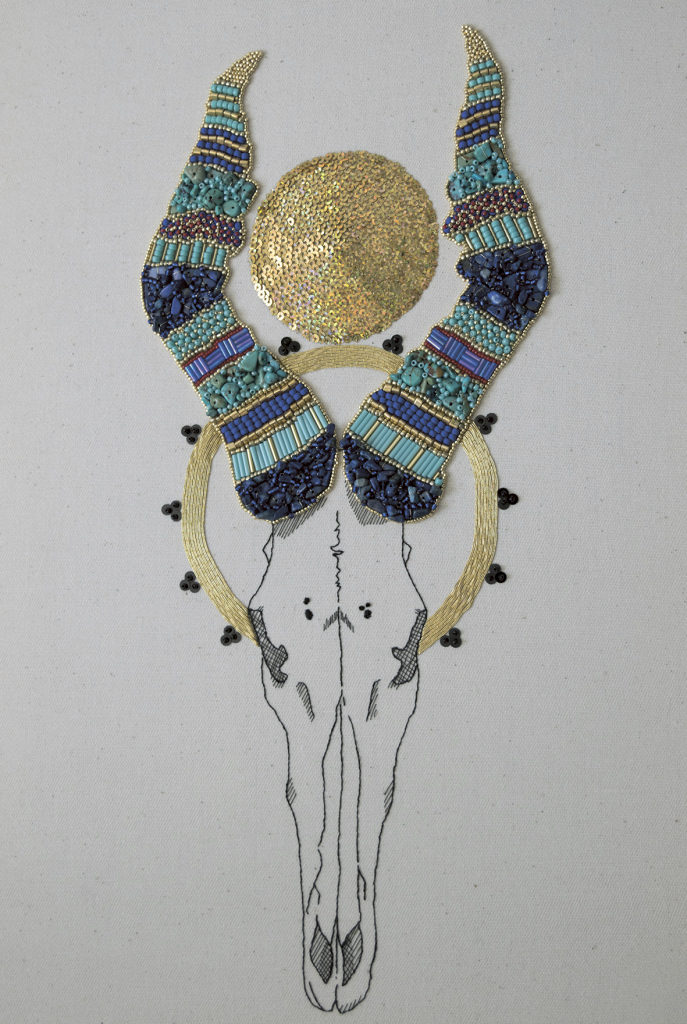 Katie Tume - The Sacred Beest from 'Extinct Icons'
Mike Cipra
has lived and written in landscapes ranging from Death Valley to the old-growth redwood forests of northern California. His short stories appear in several anthologies including  Awkward One and  Awkward Two, The Whirligig, and  Danger City I and  Danger City II. He's just begun looking for representation for his first novel,  Enviro.
Share
During his life, Archduke Franz Ferdinand personally killed over 350,000 animals. The logbooks kept under glass at Konopiště Castle scrupulously record each of the Archduke’s successes. Date and species. Occasionally, there is a lively, poetic commentary on the kill from Ferdinand himself:

If the Archduke began hunting when he was ten years old (as Schumann has theorised in his scrupulous biography, Ferdinand: Last Scion of Europe), then the heir to the Austro-Hungarian monarchy would have needed to kill 22 animals a day to stay on track.

Twenty-two beasts a day! This pace is so frenzied that a few radical historians have suggested that Ferdinand began hunting at an age earlier than ten. 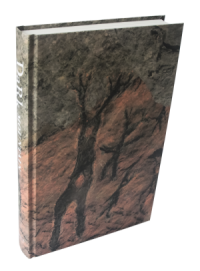 The Archduke at 16 months, crawling into position behind a big ten-pointer. The animal stands cautiously, his breath leaving trails in the cold Moravian morning. Young Ferdinand unconsciously emits a senseless exclamation of childhood delight. The buck tenses. Ferdinand’s soft fingers fumble with the heavy trigger. A split second later, gunpowder roars in approval of the toddler’s strength.

The hunted buck collapses, and the Archduke is somersaulted backwards by the recoil of the well-crafted woodsman’s rifle. Eventually, the baby comes to rest near the exposed roots of an oak tree. He begins crying.

The young hunter’s wet nurse is rushed to the scene on horseback. As she swings out of the saddle, her heavy peasant breasts are already bared. But it is not the comfort of milk this young hunter needs now.

The Archduke has crapped himself.

The day Kaiser Wilhelm came to visit, Archduke Franz Ferdinand and the German premier shot more than 6,500 pheasants together. Within the first ten minutes of their visit, the Kaiser told a dirty joke involving the Tsarina of Russia and a missing box of snuff. The punchline had Ferdinand in tears. That Kaiser was such a crack-up!

All morning and afternoon, townspeople were employed to run, to clap their hands, or to produce any loud noise that might flush the brilliant pheasants into the open. These same employees were also responsible for collecting the dead birds in brown sacks and for plucking clean the pheasants. The pay for this enterprise was in flesh: a small share of the Archduke’s kill.

Two of the employees, coincidentally both boys in their late teens, were accidentally shot while flushing pheasants into the open. Their families received generous compensation from the Archduke and the Kaiser, respectively.

Any serious historian should take this into account – afternoons when European heads of state came to visit undoubtedly brought the remainder of the Archduke’s daily kill average down to a more reasonable level.

An excerpt from a letter Ferdinand wrote to his wife during the African safari of 1910, translated from the original German source material by A.M. Schumann:

… today we ate strips of barbecued zebra flesh, a bit overcooked but quite flavourful, not dissimilar from the venison we eat each September, when the forest is teeming with bucks and does. Today we are going after The King of the Hunt, as the natives here call him. It will not be my first lion, of course, but the tension is still quite palpable.

The fellow we originally wished to guide this expedition has a name that means Lover of Lions in the local dialect. His face has been disfigured quite brutally by a lion’s claws. This was done to him at birth, as it has been done to all the men in his family for the last two generations. Through an interpreter, I asked why such a barbaric practice is allowed to continue in the 20th century. The man paused, then told the interpreter a long story.

The fellow’s grandfather, when the grandfather was a young man, got lost in the desert. He wandered there for a full week. On the seventh day, delirious from thirst and hunger, he came upon a female lion that had just killed a gazelle. The young man threw himself at the lioness’s feet, hoping for a quick and honourable death. But the lioness did not attack. She allowed the young man to drink gazelle blood with her. After drinking this blood, the fellow continued wandering until he found some outpost of civilisation. He survived and eventually gave seed to a prolific family. ‘And that,’ concluded the interpreter, ‘is why all men in this family are marked on the face by a lion’s claws, and why this man, Lover of Lions, cannot be your guide on a lion hunt.’

On the contrary, I felt that such a fellow would be the perfect guide. So I offered the stubborn African ten times, then twenty times, finally a hundred times the going rate, and still he refused me! Some people cannot be helped, and that is a major reason why, in addition to their innate stupidity and laziness, the poor of this world will always be poor.

I miss you tremendously, Sophie.  I will return to you with hunger and an aphrodisiac made from the mighty lion. Tell the children to study their history and mathematics, for these are the foundation of the world. Tell them also that Papa is going to kill a beast for each one of them.

Yours, and always yours,

No matter how varying the opinions on the Archduke’s life, Franz Ferdinand’s death is generally accepted as the precipitating factor for World War One, a conflict which left somewhere in the neighbourhood of 16 million people dead, about half of them civilians.

A single bullet killed the Archduke, passing from the barrel of an assassin’s gun through his intestines. This historic bullet is kept under glass at Konopiště Castle. To see it, one must walk down a corridor lined with thousands of stuffed birds, bears and deer heads. The bullet is polished every year and placed on fresh satin.

Above the bullet is a framed photograph of the Archduke. He is dressed as a mummy. The photograph was taken in Cairo, three years before Ferdinand’s nation-polarising assassination in Sarajevo. Apparently, it was a custom for European nobility to have a ‘mummy photograph’ taken while they were travelling through Egypt. A little joke about death. A thumb-the-nose at The Reaper.

In his mummy photograph, the Archduke does not look jocular. Ferdinand’s moustache is waxed to even points, and his eyes register serious discomfort.

It appears to the casual observer as though death frightened the Archduke.

Maybe, as strict historians like Schumann have suggested, the interpretation of human emotion from a photograph is too subjective to be accurate, too reliant upon the interpreter’s own feelings and agendas. Perhaps the gauze around the Archduke was only a bit too tight that day.

The process of taxidermy can sometimes do that to an animal. So can extinction.

In 1810, ornithologist Alexander Wilson estimated that there were over two billion passenger pigeons in a single flock. The birds were so prolific that the skies over American cities would darken for days with the arrival of the pigeons. Naturally, people would feel obliged to shoot them – for food, for sport. For civic duty. For order. For freedom. For the thrill of being able to extinguish life. For a momentary feeling of control over the great mystery. People kill for many reasons.

The last passenger pigeon, named Martha, died in 1914. It was the same summer that Archduke Franz Ferdinand took one in the gut. Since then, the Archdukes have been multiplying in secret, under different names and titles. Now they are the ones darkening the skies over many of the world’s cities. Now we are the ones darkening the skies, everywhere.

And the passenger pigeons, they are like words in a lost manuscript, the shadows of their former existence floating with perfect grace and filling the missing pages with a story we can no longer read, or even claim with credibility that we once heard. Imagine: two billion pairs of wings, and their electric song as they divided the sky.

Katie Tume
The Sacred Beest from ‘Extinct Icons’
Hand embroidery on cotton with gold passing, glass beads, turquoise, lapis lazuli, sequins, cotton thread
The bubal hartebeest was native to the land north of the Sahara desert  and was an animal of significance in ancient Egyptian culture. Its numbers sharply declined in the 19th century after the French conquest of Algeria. The non-human inhabitants of the region were exterminated alongside its people, with entire herds of hartebeest destroyed in single hunting expeditions. The last bubal hartebeest was shot in North Africa around 1925.

Katie Tume is an embroidery artist from Brighton, East Sussex. She is a fifth-generation needleworker who first learned her craft at her mother’s knee. She attended the Surrey Institute of Art and Design as a Fashion and Illustration student, but is largely self-taught in hand embroidery techniques.Katie’s work is influenced by folklore, mythology, pagan societies and the old gods. She is currently working on  projects around ritualising animal death and lost species