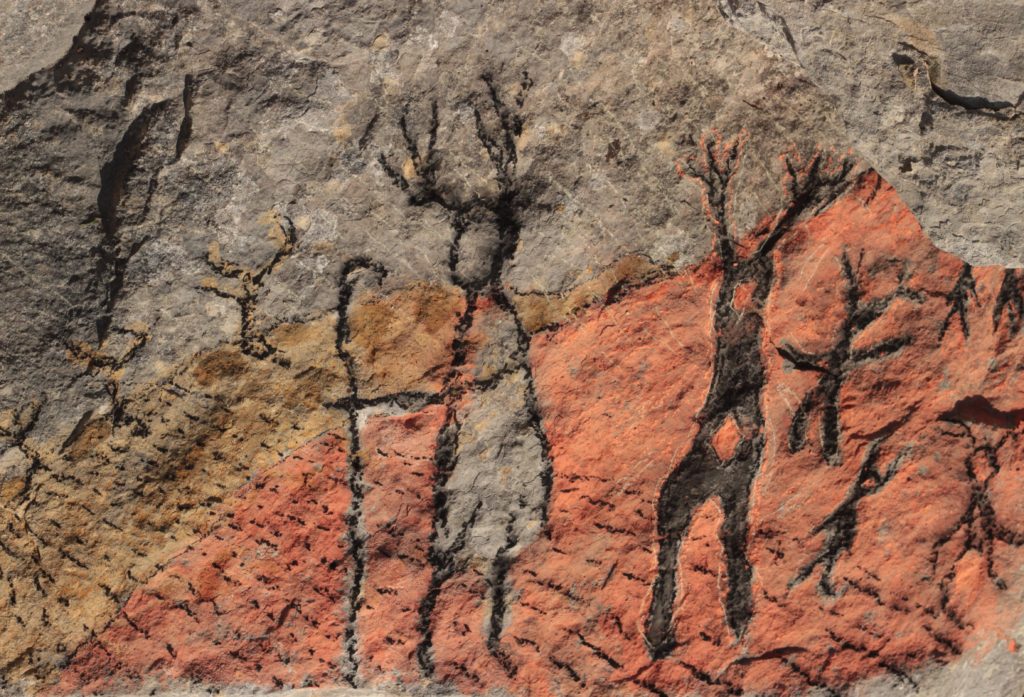 Editorial: Being Human in the Thick of the Present

The painted figures you see on the cover of this book are no longer to be found on the Dorset coastline. The images made by Caroline Ross from ochre pigments and charcoal were quickly scoured from the uneven surfaces by ice and wind and violent rain. What looks like it would last for millennia lasted only hours.

What happens when we witness time scrub away evidence of our existence, when it covers our words with leaves, when our language becomes entwined with the lost tracks of animals? When letters turn into trees, pages burst into flames, when our language comes apart and its fragments cohere into other shapes? When we hold time in our bodies and not in our minds, what stories do we then tell?

So much of our discussion about life on this planet is rooted in the past – what we did wrong, why we made such awful choices, who is to blame. Then, as we build our cases against the offending parties and write tome after tome about the sins of our fathers, we leapfrog into debates for solutions, creating lists of best practices, which get us mired in predictions of disaster and rash preparations for apocalypse. We so easily look to the past for explanations, our meaning-making dependent on ancient cultural practices that still haunt our ways of knowing. But once the past satisfies our search for meaning, the future tugs at that satisfaction and our intellects settle in imagined worlds not yet formed. What the languages of blame and hope skip over are the quieter present moments where memory and desire are tempered. So much of learning to live with the reality of a present self is about relinquishing our obsession for our past and future selves. And so, here we are in the 13th issue of Dark Mountain caught in an existential bind, using language to explore being human by letting go of many of the things language creates.

With any number of destructive human behaviours to relinquish, there is one common reckoning that comes into focus, as we explore what to keep and what to leave behind – how our language and behaviours help construct our notions of time. Many of the works in this issue imagine what it might feel like to see ourselves more as biotic constituents living in emergent ecosystems, rather than as mere social conscripts tied to entrenched and tired ideologies. The stories, poems and artworks invite us to explore how we might live more fully in what critical theorist Karen Barad calls ‘the thick now of the present’.

When we hold time in our bodies and not in our minds, what stories do we then tell?

As the living world buckles, many of us find ourselves re-examining the most dearly held beliefs about our own biology. In these pages, Nina Pick and Emma Giffard hold up motherhood as a troubled, complicated domain, once a woman recognises that the futures these new babies will inhabit are cloudy, opaque places menaced by what these offspring will inherit from their parents.

How we reckon the past largely depends on how much of the future we lay claim to. Michael McLane’s poem, for example, describes the use of a natural hot springs by different generations, and asks us to live with a fuller picture of history. Tom Smith’s conversation with Alastair Bonnett re-valorises the much-maligned feeling of nostalgia that stalks civilised life. Sarah Thomas, drawing on fragments of books salvaged from a house fire, examines how quickly disasters – ‘natural’ and otherwise – pull our attention away from the quaint and comfortable past to realise there is only this time we call Now. 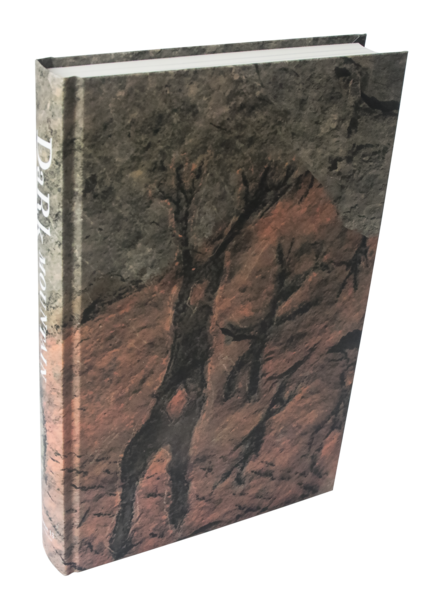 Katie Tume’s icons, immortalising the great auk and bubul haaatebeest, show us how to honour extinct creatures with beauty and some measure of joy. In Kate Walters’ Horse Island Woman and Meinrad Craighead’s Woman with Ravens we see the fluid relationship between the human and the non-human, while in Katie Holten’s swirling list of microbial flora found on and in our own bodies, we see the collective bloom of the myriad communities of organisms that we refer to with the single term human. All these works help redefine that term. Each one of us is an ecological jubilation in real time!

But functioning as lived biological bodies, more centred in Barad’s thick now of the present, isn’t easy. It’s full of misdirection and miscommunication. It’s learning to re-imagine human language as speaking with other creatures through one’s own body, as Sara Hudston does with her horse, to learn to live together as imperfect beasts and give up our hunt for unicorns. Tuning human bodies to present-focused biological frequencies is to accompany Jane Woodhouse as she births lambs in Iowa. In the simple observation of how other creatures come into being, the human measure of time slows and we too learn to breathe like beasts.

To release our white-knuckled grips on the past and the future is to run through the ancient rocks of the Peak District with James Disley, surrounded by the crowds of weekend “nature lovers”. Being a present human being is to let laughter help release our anxieties with Andrew Boyd’s gallows humour and Natalia Zajaz’s comic poke at our human responses to climate change. To fully experience the feeling of letting go is to float with Mark Rutter in the thick now of ocean tides or learn to walk the most dangerous paths in nature with Kyle Holton, to bathe in and absorb our deepest fears of the elemental and animal Other.

We have learned by now, after 12 issues of Dark Mountain, that to fix the ills of the past by focusing all our energies on drafting our best and brightest future is to undervalue our current disrupted but still vibrant lives. Daily biological living goes mostly unattended and unnoticed because much of it is so uninspiring to so many of us. ‘You have evolved from worm to man, but much within you is still worm.’ With these words, Friedrich Nietzsche admonishes us to let go of our most damaging sapience, to feel more intensely what it is to be Homo:, a temporary stochastic spark in that great chain of biological being. To sense the worm inside is to see that such a creature is not inert. The worm still has purpose. It has dirt to get through, defecations to make, its whole body to grow back when the spade of a careless gardener slices it in half. This type of biological existentialism concerns letting go of so much of what we think it means to be human, to free our minds and bodies from damaging social practices to embrace the immediate, unexplored and ecstatic ecologies that are right in front of us. These few sentences can never reveal the complexities and richness to be found inside this issue. We encourage you to delve deeper. The ecologies of Now are calling.

ERRATUM: On p.200 we incorrectly attributed the author of ‘Bearing Witness to a Disappearing World’ to Michael Mahay. It is in fact by Michael Malay. We apologise for the mistake.