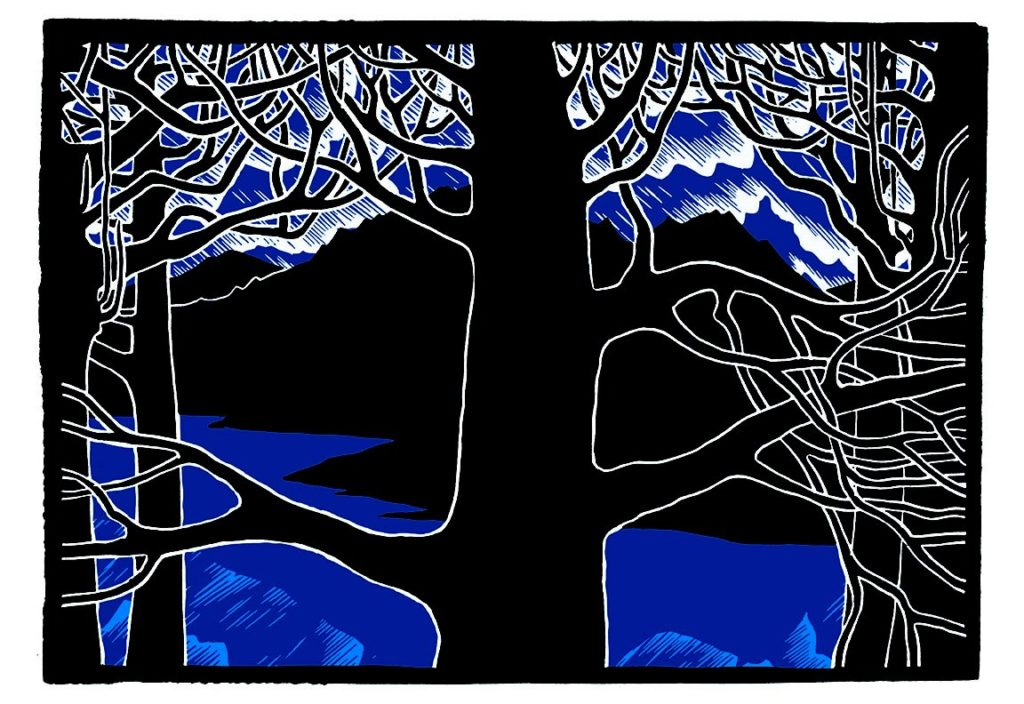 Linocut cover for Issue 7 by Stanley Donwood
The Editors
Share

Fire on the Mountain

In Aeon’s review of Dark Mountain’s 2012 Uncivilisation festival, the author sounded a warning about the ‘sinister undercurrents’ of the movement: ‘The anti-technology polemics, the witchy nature mysticism and huntsman imagery,’ for this first-time attendee, ‘brought to mind nothing so much as English “neo-folk” acts such as Sol Invictus and Death In June, mainstays of Britain’s far-right bohemia, with its reveries about masks and antlers and the Brownshirts.’

A little less than two years later, the far-right Jobbik party took a fifth of the votes in Hungary’s election, propping up the nationalist and avowedly ‘illiberal’ government of Viktor Orbán. In the months that followed, the same current of volkisch sentiment seemed to be seeping up through the ground across Europe: Marine Le Pen, leader of the French Front National, topped a presidential opinion poll for the first time; the anti-immigration Swedish Democrats party doubled its share of the national vote; while Britain’s UKIP and the Danish People’s Party each took a quarter of their respective countries’ vote for the European Parliament. Although few of these parties are as overtly fascistic as Jobbik or Greece’s Golden Dawn, what was once dismissed as a regressive anomaly now appears to be a genuine trend across the continent.

Most recently, even Germany – a country where, for 70 years, civil discourse has been weighted towards a liberal vision of multi-ethnic rationalism – appeared to have succumbed to the trend when the anti- ‘Islamisation’ demonstrations of the Pegida movement erupted in Dresden, its chants of ‘Wir sind das Volk!’ producing troubling resonances for many observers. Meanwhile, in the US, the right-wing stranglehold on the terms of political debate and the slow erosion of the edifice of American rights have continued unabated despite six years of a Democratic presidency.

What does it mean, at a time like this, when the Enlightenment project of liberalism, democracy and reason seems to be under attack from every side, to be part of a cultural movement advocating a deeper relationship with our bodies, with the intuitive and non-rational aspects of our psyche, and with the land beneath our feet? What does it mean to promote a return to the primal, the wild, the traditional – to a deep belonging?

Are we playing with fire? Are we simply a group of middle-class literati, fetishising the irrational and the powerful, unaware of how our irresponsible intellectual posturing risks the release of savage, chthonic upwellings? Some would say that we ought now to be trying to defend the values of ‘civilisation’ against those who would replace it with a greater tyranny – that it is time to put aside our privileged indulgences in primitivism, Romanticism and back-to-nature nostalgia and to stand with our fellow citizens in holding the line of modernity against an encroaching tide of regressive barbarism.

Or might it be that this is just another one of the false choices we are presented with by our civilisation? That the purported division between a rational, ordered, peaceful civilisation and the blind savagery of times past is another false dichotomy? Just as people point to reforestation or the decline of industrial pollution in rich countries as evidence that the environment is improving – conveniently ignoring that the destruction has simply been offshored to the majority world – so we are invited to view our wealthy bubbles of relative peace as proof that civilisation need not be rooted in violence; all the while repressing knowledge of the fires of conflict burning elsewhere on the globe.

If the ugly face of ‘belonging’ has started to show its face in the West, perhaps it is less a recursion of an ideological disease from the past, and more a symptom of systemic dysfunction; an indication that the post- War deal upon which Western nations proceeded precariously for half a century – that devil’s bargain that gave the mass of working people in Europe and America just enough of the spoils of Empire not to want to rock the boat, not to question where the wealth was coming from, or the human and environmental cost – has started to fail. And as the boat starts to flounder, some, inevitably, look for easy answers; for someone to blame.

That the impact of Empire’s declining power to exploit and extract would generate animosity against the outsider, the immigrant, the other, was both predictable and predicted. Rather than being a regression from reason, though, this can be seen as a failure of story – it is precisely the collapse of the motivationary myth of continual progress that has unleashed so much inchoate frustration; and it is precisely the absence of other stories to replace the officially sanctioned narrative that renders the situation so dangerous.

In Britain, where the Dark Mountain Project was born, we are perhaps insulated from the worst excesses of these dangers: our localism rarely flares into outright animosity; our connection with the soil seems to have more to do with hydrangeas than Hitlerism. Perhaps this gives us an opportunity – and thereby a responsibility – to hold open a space where these issues can be dealt with safely; where the shadow-stuff of anger, fear, exclusion and severance can be allowed out, drop by drop, to be alchemised by the clear light of honesty and understanding.

We have always known that we would be accused of breaking open the tombs of things better left buried; one does not, after all, challenge the fundamental values of a civilisation without treading on the ideological toes of some vocal and influential entities. And we have always known that, despite those voices, we would continue to dig for the rough ores of truth and insight.

For the alternative – as described by Barbara Ehrenreich in her book, Smile or Die – is of a totalitarian optimism, an enforced positivity which pushes every misgiving, every sign of weakness, every moment of silence and humility down into the deepening sack of bilious, unconscious resentment. Our culture cuts itself off from the dark currents of the blood, and in doing so it both robs itself of their transformative power and plants the seeds of their violent reversion. For it is often precisely when the human desires for belonging, for rooting, for connection to the land and our own animal nature, are stymied and suppressed that they warp into the brutal distortions that fill the pages of the history books.

Confronting the shadow is never easy – it can lead you to uncomfortable places and introduce you to ill-mannered travelling companions. As you join us around the campfire, you may find yourself conversing with fierce-toothed wolves or primeval lizards; may be confronted with the false coin of travelling tricksters or the hairy stink of ancient machismo; may be served up the oil-stained shrimp of an eroding community, or the raw catch of a broken relationship; you may find yourself crawling down a New York sidewalk, or lying, wire-cutters in hand, beneath the belly of an industrial machine. You may hear a low growl from the darkness at your back.

But wander far enough into these shadows and you may stumble across the unexpected: the tenderness of connection that comes from facing death squarely; a woman, entering the dark of a cave, transfigured into light; the sudden life of a circling swift. And behind the conflicts and chaos of our civilisation’s early struggles lie the traces of an older wisdom: voices of the indigenous, the Neanderthal, the animal whisper to us across the years – or speak directly to us here and now, if only we have the wit to listen.

If the dark forces of conflict and control are indeed encroaching once more upon the ‘civilised’ world, the need for us to learn how to root is more, not less, urgent. As the shadows lengthen through this ‘twilight of the evening lands’, the need only grows stronger for new narratives; for stories, voices, visions and verse that help us remember what it is to be nothing more – or less – than human. 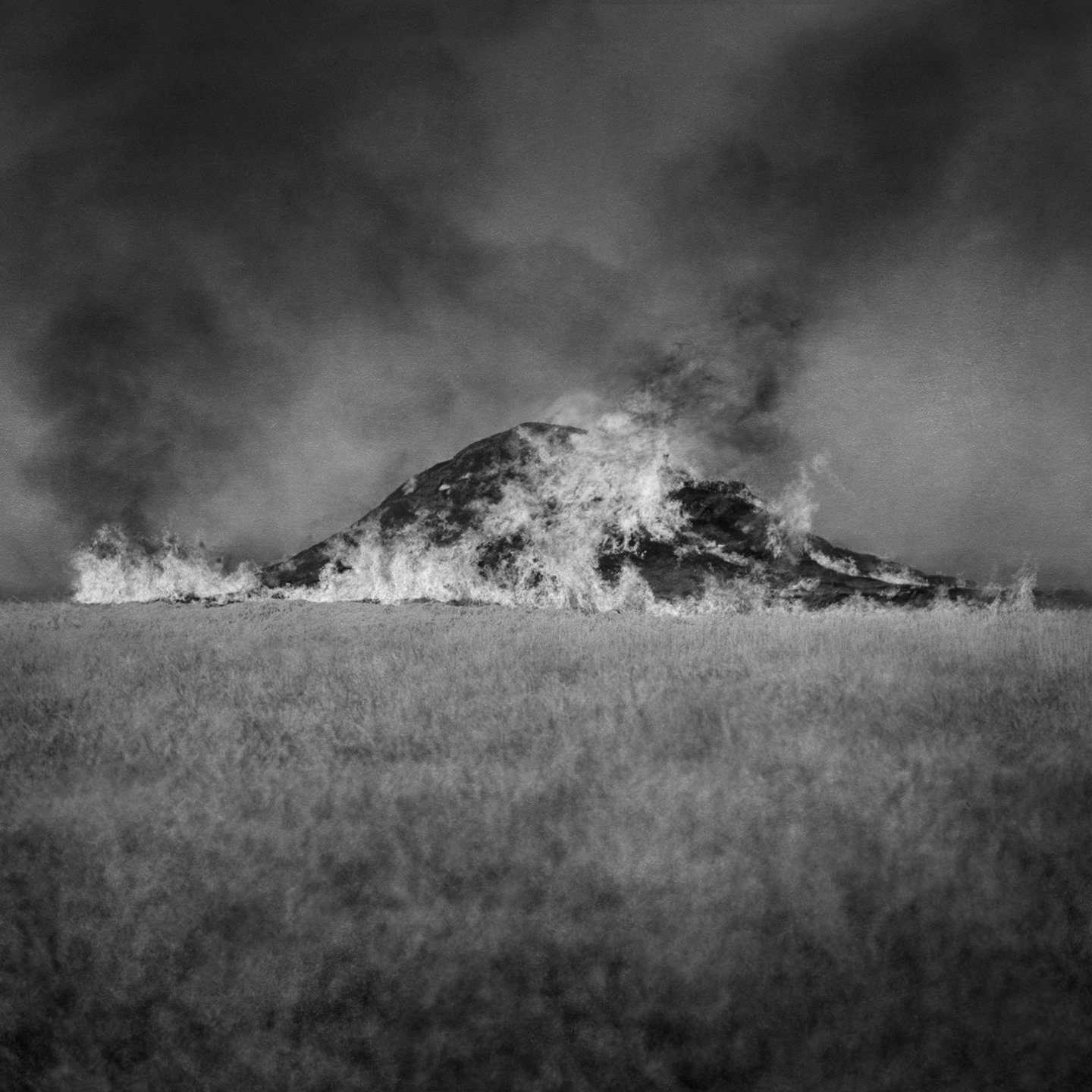