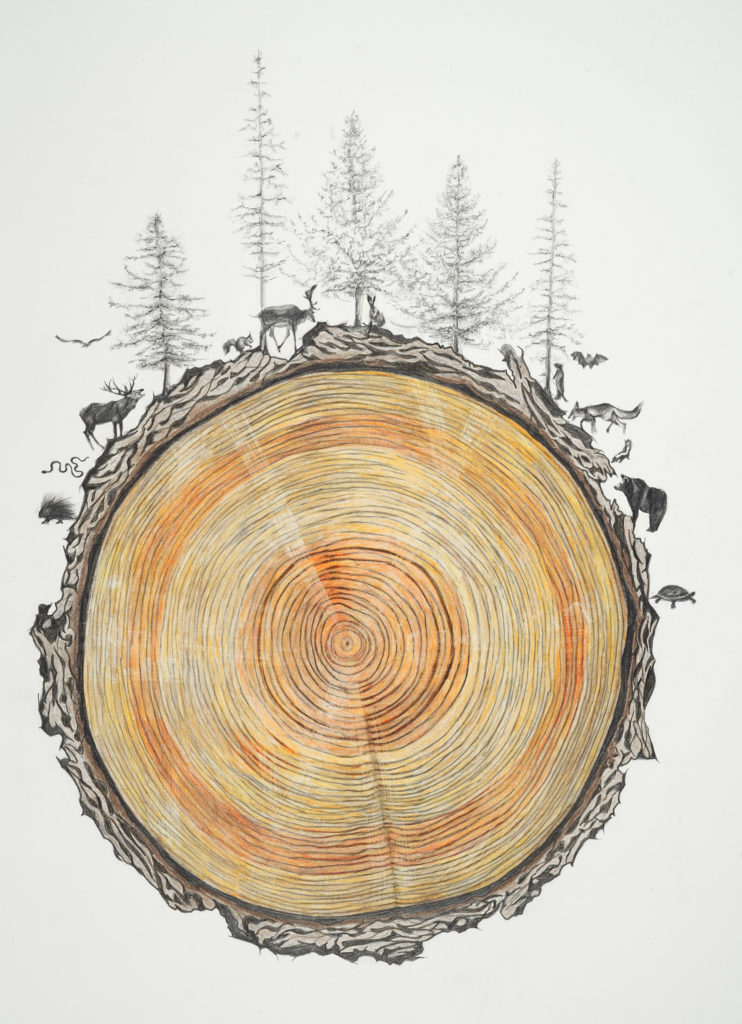 Cover of Issue 9:''A Family Tree' by Rebecca Clark.
The Editors
Share

Humbleness is the most unfashionable of virtues. We are continually exhorted by late-capitalist civilisation to ‘be proud’, to ‘stand tall’, to ‘believe in ourselves’. It is held as axiomatic that the self is the centre of our being; that the human is the zenith of evolution; that the increase of human agency and dominion, and the search for meaning and purpose in our own individual selves, are the central tasks of existence.

Little wonder, then, that the idea that we might not have the starring role in the show of life fills most contemporary minds with fear, horror or disgust. To suggest that our power and control over the world and its other inhabitants might be subject to reversal, or that our dreams of industrial ascendency over the living biosphere might prove to be nothing more than a narcissistic fantasy, is to invite the kind of allegations of doomerism, Luddism and misanthropy to which those involved in the Dark Mountain Project have become accustomed over the past seven years.

Outside the small spotlight of Western industrial society, these ideas do not necessarily hold. Nor, indeed, was it always this way in the West: the Greeks thought that an excess of hybris would attract the wrath of the gods, and that the inevitable fall would follow; mediaeval Christianity placed great weight on the cultivation of humility and the avoidance of pride – for most of European history, the idea that a good citizen would make the promotion of their own achievements and interests their highest goal would have been unthinkable.

The co-founder of Dark Mountain, Paul Kingsnorth – whose story, ‘Ice’, explores one man’s attempt to escape the tyranny of selfhood amidst the melting glaciers of Greenland – wrote in the call for submissions for this book: ‘Humanity is going to be humbled one way or the other, so we may as well begin the process ourselves.’ An honest consideration of the accelerating effects of climate change, mass extinction and societal dysfunction makes it difficult to disagree with this.

Even (perhaps especially) for those who have awoken to the urgency of these problems, humbleness can be an elusive trait. It is too easy to think of ourselves as warriors in the great battle against Empire, or sybils wringing our hands in despair – and to end broken and bitter, having changed very little in the world; having ignored the smaller things worthy of our care in preference for the Grand Narrative of Human Struggle.

Humbleness comes from the Latin humus, meaning ‘earth’; so to be humble means to lay oneself low, but also to be grounded, to return to the solid and material. The surrender, voluntarily or otherwise, of our empires of self can also be seen as a re-connection with reality, a re-communion with the Earth.

In their own ways, the art works, poems, stories and essays in this volume demonstrate the value of humbleness. Pieces like Brendan Byrne’s story ‘A Stone and a Cloud’ or Robert Leaver’s performance art ‘Hole Earth’ reveal the ache of desire that underlies our alienation from nature, while poems like ‘Eroding’ or ‘The Heart’ explore the melancholy consolations of losing yourself in the breadth of time and world.

Humbleness also allows us to be receptive to other voices. It might be as subtle as realising that we can pass over the global news bulletins to bear witness to more immediate worlds, as Em Strang recounts in ‘Over Yonder Horror’; as mysterious as the early radio engineer described in Samantha Clark’s essay ‘Ether’, who heard the sound of the Earth’s magnetosphere in the silences between spoken words; or as simple as the listening practice described in ‘Learning Carefully from the Sea, its Vast Silences and Ancient Stories’.

While the works in this volume look unflinchingly at the dark truths of our time, together they form ‘A Cabinet of Curiosities’; a hearteningly disparate miscellaneum of objects found at the shoreline, each shining with its own unique patterning. In the intricate hand-cut architecture of Rogan Brown’s paperwork ‘time fossils’, or the artfully structured sound-play of Bridget Khursheed’s ‘Mustelid Research’, we see humbleness put to work in crafting quiet works of organic wonder.

At a time when so many are displaced from their familiar surroundings, this may take the form of a journey: a quest for healing in the forests of Dumfries and Galloway, or walking to the Climate Conference in Paris in a muddy suit, making a flotilla of paper boats out of discarded materials along the way. For others, it may result in the rediscovery of community and a sense of belonging, as long-time contributor Akshay Ahuja’s story ‘The Cleanliness Committee’ shows with wry humour, or as Jane Lovell realises in ‘Galapagos’: ‘We are all in this together’.

Whether recognising that we are not clearly distinguishable from our bacterial symbionts, identifying the ubiquity of the myth of human supremacy, or simply admitting that we have been outsmarted by crows, this humbling – the realisation that the human self is not the inviolable sovereign we have been taught to take it for – can be a disorienting process. But it can also be a liberating one. A strange thing happens when we finally submit ourselves to this unfashionable state. With humbling comes a simplicity, a singleness of vision and a return to a more honest appraisal of what it means to be human. As the grand narratives of recrimination and despair dissolve, the universe appears afresh as a collection of wonders – bewildering objects, transforming passions and moments of transcendent awe.

Like the word ‘humble’, ‘human’ also comes from the root ‘humus’ – to be human is to be an earthling, literally. It may yet be that, despite our inflated sense of our place in time and space, despite our trail of arrogant destruction, there is still a thread of humbleness that runs at the core of what it means to belong to this strange species – which is, as Anne Tagonist reminds us, ‘the only species we have the option of being’.

Cover image: ‘A Family Tree’ by Rebecca Clark. ‘I make drawings of the natural world, transient moments of grace and beauty in an age of disappear­ance. Inspired by plant and animal studies of the Northern Renaissance, Netherlandish devotional panel paintings, and nature mysticism as expressed through various forms of art, music, poetry and prose, my art acknowledges interconnectedness in nature and our loss of connection with the sacred. I often use circular forms, such as dandelions, spider webs and bird nests, as symbols of cosmic mandalas echoing cycles of life. In Family Tree, the rings suggest a nimbus rendering sacred all life of the wood. The wild animals in silhouette across the outer ring of bark are ‘all our relations,’ or mitakuye oyasin, to borrow from the Lakota prayer for oneness and harmony with all living creatures.