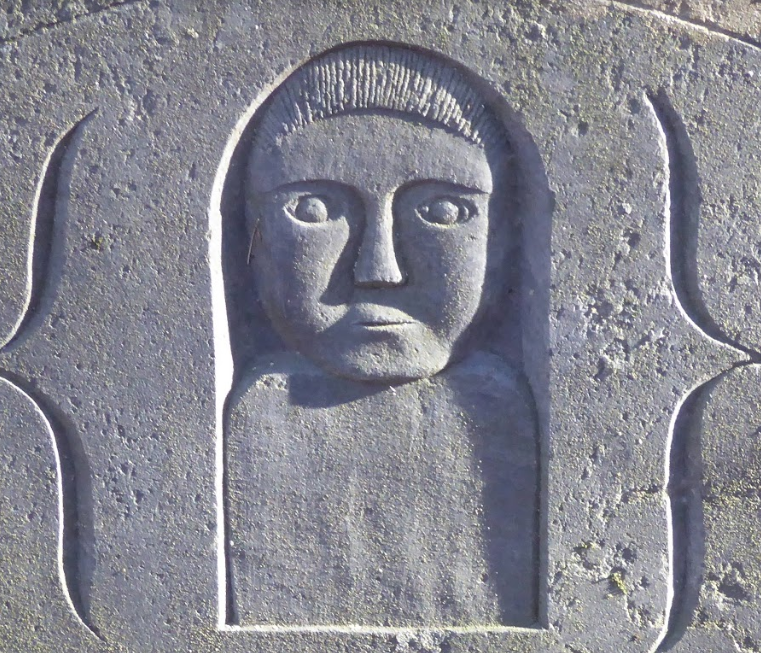 Gravestone of Mary Heywood, old burial ground, Holden MA. Photograph by Judith Haran
Judith Haran
is a writer and psychiatrist living on an old farm in Massachusetts with her partner and cats. She is currently working on a novel about WWII. She feels that New England cemeteries constitute one of the last bastions of authenticity.
Share
In the 20 years we’ve lived on this New England farm, we’ve lost six cats. We buried the three who died of natural causes, and the one who’d been struck by a car. We never found the other two. We assume they were killed and eaten by coyotes, relatives of the ones we hear singing on summer nights. Our cat cemetery, shaded by old pines on the northeast corner of the farm, came into being only three years after we bought this place. But these five acres have been inhabited since at least 1775, the year our house was built. No-one has any idea how many animals have been interred here in the past two and a half centuries. For all we know, the grounds are strewn with the skeletal remains of cows, horses, sheep, in addition to the dozens of cats and dogs who’ve prowled these fields, these woods.

For all we know, these few acres could also hold the remains of people who once lived here, perhaps even before the arrival of Europeans. How often, in our fast-paced modern world, do most humans stop to think about the vast numbers of the dead, nearly all of whom lie in unmarked graves beneath our streets, gardens and lawns? They are invisible to us, but is the reverse necessarily true? Perhaps they see us, or hear us, as we, distracted and unaware, walk across their remains every day.

There’s a part of me that wants to leave this old farm. The house, with its 11 rooms, is far too big now. The political situation in America frightens me more with each passing week. With my two passports, I could pack up and leave this place behind forever. I’ve entertained visions of moving to a whitewashed cottage in Kinsale; if I’m frugal, my savings might just last long enough.

But I don’t move. I stay. I stay to tend my graves, to sing to my dead. Every April, I clear fallen branches and winter’s debris off the five round granite stones that mark the cats’ graves. Every autumn I sing to my vanished friends while cutting back the summer’s growth of tall grass and brambles. We found these loaf-shaped stones on Maine beaches; each has been smoothed by time (I cannot even imagine how much) and the ocean. Here on the farm, they keep trying to sink into the earth; every fall I add pebbles underneath to keep them visible, above ground level.

When I’m gone, there’ll be no-one left to do this. The small stones will succumb to gravity and become invisible as grass and leaves cover them, season after season.They will rejoin the earth, their inscriptions no longer visible, no longer meaningful. The memory of the cats (Molly! Oliver!) whose names they hold will die with me. Already, it’s harder to remember the names of the other cats, the ones whose bodies we never found.

With every passing year, I am more rooted in this place, in this earth, through this visceral knowledge of loss. We’ve lived in many places – at least 30 between the two of us – but this is the only spot on the earth where we’ve dug into the soil, laid a beloved being in the hole and covered that being with soil. We didn’t hire someone to do this; we did it ourselves. After all, you can’t hire someone to water a new grave with tears. Not in New England. Not yet.

I spend more time in graveyards than most people. I often volunteer to photograph graves for strangers who leave requests online. Smaller, older graveyards are my favourites. I never know what I’ll find in them, what local style of stonecarving or verse I’ll stumble across. Newer cemeteries tend to be far more uniform, far less engaging, their smoothly polished granite stones seemingly designed to fend off any thought of organic decay.

Because of my odd hobby, I know only too well how rarely any of the dead are thought about, cared about, known to any living soul. I have seen their stones broken into pieces. I have seen their names and the dates of their lives blurred by lichen growth or by decades of acid rain, rendered unreadable forevermore. Some of the earliest slate stones have delaminated, flaked off in layers, leaving the inscribed names of the dead to literally rejoin their owners in the earth.

The small white marble lambs, so often found here on children’s graves, are dissolving like sugar into misshapen lumps. Occasionally, broken stones are repaired, but most are left to lie where they have fallen, a matter of concern to no one but me. I’m learning the lessons these stones have to teach, the lessons of transience, of impermanence. Tombstones may extend our presence on earth, but not for very long.

I don’t have too many years left. My partner is much older. I will likely leave no-one behind. I’m writing novels, novels I hope will outlive me, a hope that feels increasingly vain, if not delusional. And like most Americans, I won’t be leaving a gravestone behind. The cremation rate in the US is now over 50%, and it’s rising. Not only are we living in the closing years of the fossil fuel era; we’re also in the closing years of the gravestone era. Here in New England, it’s been a brief one, a mere 400 years. Soon, I suspect, we’ll be back to burying our dead as simply as the region’s indigenous inhabitants once did, in graves marked with sticks, if at all.

I’m writing this on the longest night of the year. It’s snowing; several inches are expected. I think of the gravestones – both ours and the thousands of others in my region – accepting the embrace of winter, protected under drifts of snow. This image comforts me, somehow. Yes, the seas are rising, but these stones will have another winter, perhaps even several more winters, before they vanish beneath the waters. Not too long after my own departure for unknown shores, the ocean will claim the graves of eastern Massachusetts. The land will become unpeopled; whoever is left will move west, to higher ground. In the end, the stones will be visited only by whatever odd sea creatures might remain to tough it out in the warmer seas of the future.

Once, decades ago, I found an abandoned 1850s gravestone in the middle of a forest. Did that stone still have meaning? With no living human connection, no-one left to carry the memory of the person below, so many tombstones do not. And these are the ones still on dry land, easily visible, not yet within sight of the encroaching sea.

Granite or slate, no matter how well-carved, tombstones are, in the end, only stones. And the dead leave behind nothing more than a scattering of minerals. So has it ever been. Living memory fades; soon enough, all who have known us are themselves gone. So many gravestone inscriptions encourage us to believe otherwise: Forever in our hearts; May his memory be eternal; Love is forever. I prefer Pindar’s take on death: Strive not, my soul, for an immortal life, but make the most of what is possible.

As our new century progresses, with its storms, heat waves, and melting icecaps, fewer and fewer things are turning out to be possible. Human experience is slowly returning to the ‘local’, to traditional possibilities, limited by our visual horizon. As we learn to accept these restrictions on what we used to call our ‘lifestyle’, may we not forget to give death its due: to reflect on mortality, spend time with the dying, and spend time with survivors, helping in any way we can with the precious, age-old task of mourning. Some of us will arrive at this task with prior experience. We will be the elders. It is up to us to lead the way.