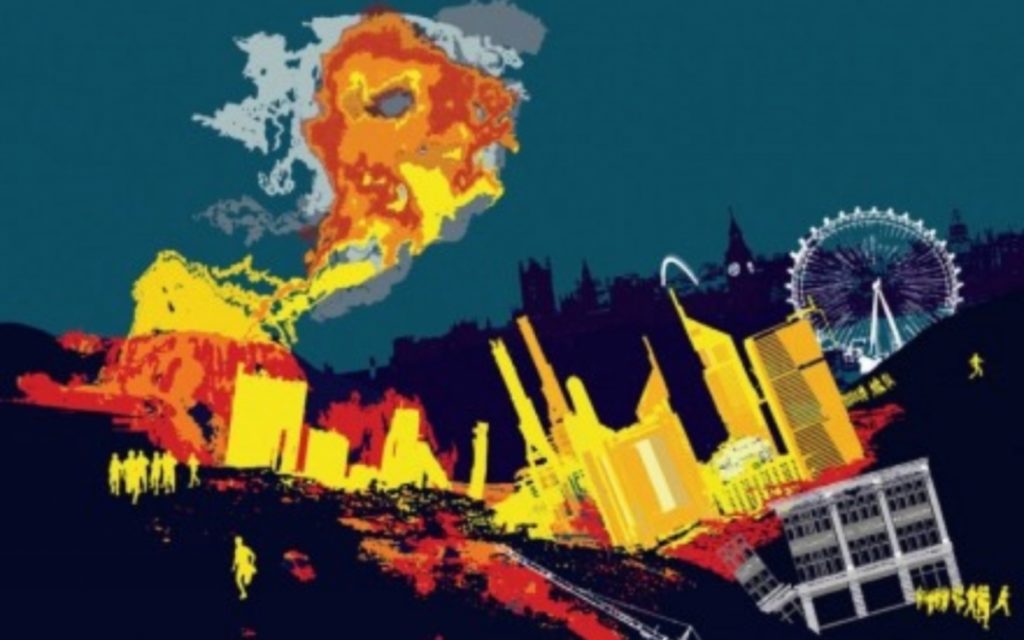 Dougald Hine
is co-author of the Dark Mountain manifesto and was at the core of the project for a decade. Originally from the northeast of England, he now lives in central Sweden. He co-hosts The Great Humbling podcast and is slowly creating a school called HOME.
Share
When Paul and I wrote the Dark Mountain manifesto, our hope was start a conversation. Over the past few weeks, we’ve been encouraged by how far this has spread, and by the range and thoughtfulness (in most cases) of the responses we’ve received.

In a good conversation, you don’t just reiterate the first thing you said: listening and engaging with how you are heard by others can lead you to explore further, think harder, revisit earlier attempts to put things into words. In that spirit, I want to pick up on one of the most recent and high profile contributions we have seen. A couple of weeks ago, in the New Statesman, the author and political philosopher John Gray published a detailed review of our manifesto – an unexpected honour for a small, self-published pamphlet. Gray is generous and, up to a point, sympathetic:

Much in contemporary thought is made up of myths masquerading as facts, and it is refreshing to see these myths clearly identified as such. The authors are right that none is more powerful than the idea that we are separate from the natural world, and free to use it as we see fit…

He questions, though, whether ‘civilisation’ can also be treated as a myth, and he detects in the manifesto a desire for ‘a cleansing catastrophe… a Romantic dream that history has proved wrong time and again.’

‘Romantic’ is a term that has been used more than once in criticism of this project, not all of it as measured and thoughtful as this review. The territory we are exploring comes with a danger of sliding into Romanticism – one we may not always have avoided successfully. It is easy to get carried away. Yet when Gray describes our perspective as ‘apocalyptic’, I think there is a misunderstanding going on, rooted in a difference between our understandings of ‘myth’ and of the role of the imagination in human history.

Of the various authors we mention in the manifesto, there is one I would want to reconsider. Not Conrad, whom Gray suggests we misread – but Cormac McCarthy, included in our list of ‘voices… rooted in a sense of place’. We have discussed The Road on this blog before: it is a remarkable novel, the work of a master craftsman who can work language like few of his contemporaries. Even so, I would hesitate to hold it up as an example of the kind of writing this project is about.

In fact, in my Long Now talk and elsewhere, I have used The Road as a marker for the imaginative challenge facing us. What McCarthy offers is the most brilliant literary expression of the nightmare which haunts our collective imagination. Its scenes present a photographic negative of the world as we know it, framed by the icons of contemporary civilisation: the man and boy push a shopping cart; the internal combustion engine may be almost extinct, yet their instincts drive them down a tarmac road; what may be the last ever can of CocaCola appears as a sacramental gift from the world before the never-quite-defined Fall.

At some level, though we may not wish to, we find it easy to imagine such a nightmare, because it validates one of the defining beliefs of our civilisation: that life without the supermarket and the superhighway is not liveable. What is harder is to imagine futures in which we do not have many of the things we take for granted, but in which life turns out still to be liveable. When we assert that the converging crises of our century present a cultural challenge, as distinct from the political and technological responses generally called for, it is this imaginative work which we have in mind. This is not about conjuring up apocalyptic visions, but defusing the apocalypse which already haunts us. As we put it in the principles which close the manifesto, ‘The end of the world as we know it is not the end of the world full stop.’

Here, we hit what may be the basic difference between Gray’s position and ours: how much does the imagination matter? Do myths shape reality, or merely obscure it?

So far as I can tell, when Gray talks about myths, he sees them as a means by which people try to escape from facts: hence, the “dream-driven” nature of the human animal stands between it and any likelihood of sanity. Whereas the Dark Mountain attitude is that some dreams are saner than others and that myths serve us as a navigation aid. When we talk about “the myth of civilisation”, our issue is not that it is a myth, but that it is a bad myth: a map which has brought us a long way, but which no longer corresponds to the landscape, and never really did. As we write:

It has led the human race to achieve what it has achieved; and has led the planet into the age of ecocide. The two are intimately linked. We believe they must be decoupled if anything is to remain.

‘Uncivilisation’ is this process of decoupling, of reworking the myths by which we live.

Whether this matters depends on how we understand the relationship between ‘nature’ and ‘culture’ in shaping human history: to what extent is our fate dictated by human nature, biological drives, competition for resources? To what extent do our practices and beliefs also shape it? Gray believes overwhelmingly in the role of nature – and seems to regard any belief in a significant role for culture as humanist (in the sense of treating humans as uniquely exempt from nature) and utopian. It feels to me like there is a gap here.

Certainly, to view culture as a uniquely human phenomenon is humanist – but, along the lines of David Abram’s The Spell of the Sensuous, I am inclined to see this as a starting point for a broader conception of culture, which is open to the cultural aspect of non-human behaviour.

As for Utopia, it is one thing to reject the pursuit of heaven on earth – and another to deny that some times and places are better to live in than others, and that the beliefs and practices of the people living there play a significant role in this. Gray doesn’t seem to regard this distinction as significant, which may be why his historical vision tends towards the monochrome – and sometimes towards what I think of as the CNN version of history, as when he claims (in Black Mass) that ‘over the long run war is as common as peace’. (An alien tuning in to CNN would doubtless conclude that humans spend a large amount of their time killing each other, but this would not make it true. As with news, so with history, war generates more column inches than peace.)

It seems to me that it is possible to share much of Gray’s critique of humanism and of utopian thinking, while taking a different attitude to the balance between nature and culture. Human nature, resource scarcity and other facts of this order are always modulated through a cultural layer which may substantially alter how they play out: ‘reality’, lived experience, is the result of these interactions, not a pure factual terrain underlying the delusion of culture. Some times and places are better to live in than others – and this is down (for example) not only to the material abundance or scarcity of things people depend on, but also to the social and cultural construction of scarcity, which has a great deal to do with the stories people tell each other about what the world is like.

The Dark Mountain Project is a cultural movement – both in the narrow sense, that it is primarily about the role of writers, artists and others who work with the imagination, and in the broad sense, that it is about the habits, beliefs, artefacts and practices by which we live and make meaning. We do not suggest that cultural responses should be the only responses to the crises we face, only that without them we may find ourselves in even greater trouble than we are already.

Hope and wishful thinking are often mistaken for each other. A great deal of sustainability talk is wishful thinking dressed up as hope, because people are too afraid to look directly at what they know about the situation we are in. If we really advocated, as Gray puts it, ‘[awaiting] disaster in the hope that the difficulties will magically disappear’, that would also be wishful thinking. For me, though, the ‘hope beyond hope’ which we write about is closer to what Ivan Illich described, interviewed at the time of the Brundtland Report, when he contrasted the vision of ‘sustainable development’ with the reality around him in Mexico:

Some novelists, like Doris Lessing in The Fifth Child, create a sense of the emergent future, of what kinds of relationships are possible in the ruins. There is a sense in Lessing’s writings of the frightening beings who have survival capacity.

It is fascinating to discover this shared experience of outsiders in post-earthquake, pre-ecological apocalypse Mexico City. There is something here of the taste of the gang, the ragpicker, the garbage dump dweller. Our difficulty is finding a language to speak about this alternative, because, contrary to professional wisdom, people with unmet basic needs are surviving with new forms of conviviality.

That is hardly a utopian picture, but it is one which includes the relentless human capacity for improvisation, for going on, for picking our way through the mess we make and continuing to find meaning in it all – beyond the point where the language of ‘sustainable development’ runs out of things to say.

There’s a great quotation, used by Gray as an epigraph for Black Mass, which makes me want to go and read Joseph de Maistre’s St Petersburg Dialogues, from which it is taken:

THE SENATOR: This is an abyss into which it is better not to look.
THE COUNT: My friend, we are not free not to look.

That we could easily have used that in the Dark Mountain manifesto says something about the overlap between the territory we are exploring. In writing this, I have been conscious of places where I could be misconstruing Gray’s position. As the project unfolds, I hope there will be opportunities to continue this conversation with him and with others who raise questions or propose routes we haven’t thought of.

Paul Kingsnorth
The comments underneath articles like this are usually a pretty depressing example of the worst...
Dark Thoughts

Dougald Hine
This project is not about ‘doing nothing’ or ‘giving up’. It’s about what we do,...
Dark Thoughts