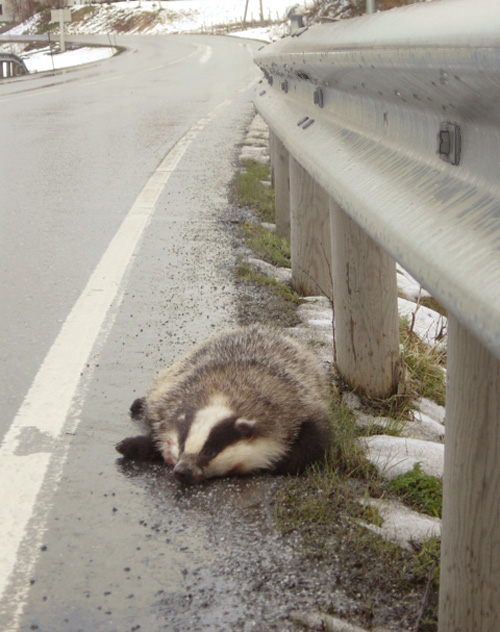 Dead badger by the road, Halvard, Norway
Ian Hill
Share
There was a dead badger on the road this morning, sprawled across the white lines in the middle, its innards smeared across the tarmac. I watched the line of traffic on each side as it passed, imagining the mixed responses to this scene of casual death: the concern, the indifference, the sadness, the disrespect. The colours of its pelt were different from those in my memory; not so much black-and-white, but a rich mixture of earth and grey, russet and charcoal. It seemed so large to be lying there between the passing wheels, so vulnerable.

It is a long time since I have seen a live badger, my habits less crepuscular than they were years ago, when I would startle them in the wood on my way out to a village pub on a summer’s evening. Now I see them only as ghosts of their living selves: as spoor and footprint in the damp mud, or flattened against the tarmac as roadkill, bulkier than they seem in life. They are one of the bigger casualties on roads these days; like the occasional fox I see in the early morning, they are significant enough to be steered around, they could still do some damage to a car, even in death. It is the smaller species that barely warrant a swerve or a look: rabbits and hedgehogs, pheasants, sometimes weasels.

It is not always the slower-moving species which are victims of speeding cars. Deer will often vault the hedges in the early morning into the path of a motorist. I saw one as I was cycling from the village a couple of weeks ago; the four-wheel drive turning and driving slowly back up the road, the flailing limbs on the carriageway in front of me, the rasping of its breath, the closed eyes, the thread of spittle hanging from its tightly clenched mouth. I dragged it from the tarmac to the soft grassy verge; a useless gesture, a poor attempt at atonement.

Afterwards, I found myself thinking of Barry Lopez’s short story Apologia, in which he describes a journey through the mid-west to visit friends, stopping to carry fresh roadkill from the asphalt, the sense of shame at the waste of animal life. He brings into focus the individual damage of each tragedy, the shocking breadth of species that come to an end on the highways of the great wilderness. It is, at one level, a deeply affecting piece; it makes the reader to look afresh at every death on the road. It just may not be enough to change our driving habits.

I am sure there are limits to everyone’s compassion: the flies smeared on the glass on a hot summer’s day, their bodies mingling with the smell of screen wash; the frogs spilling onto the warm, wet tarmac after a spring rainstorm. To imagine every non-human victim of traffic would be an emotional overload, a tsunami of compassion. It is already too much to think of each individual human casualty, every family shattered by the event, every person whose life has reduced to the fading sodden bouquets which collect after a fatality. To add to that the beetles, the lizards, the butterflies, would be an unreasonable burden, wouldn’t it?

Perhaps it is easier to deal with the collateral damage of cars: the loss of species in the rainforest, the decline in crested newts as another bypass is cut through green belt, the erosion of coastline as the sea continues its incremental rise. Carbon emissions can so easily be cast as someone else’s fault: rainforest loggers, Chinese power stations, industrial plants. We can choose to look away, as though it was not us that hit the badger.

A mile from where I live is a limestone quarry. It produces roadstone and gravel for the construction industry. The freshly quarried walls and banks are rapidly colonised by nesting birds: peregrines and ravens share the same nest at different times in the spring; sand martins squeal through the echoing spaces. When the quarry is worked out, in perhaps ten or fifteen year’s time, it will be restored as a wildlife reserve. I have seen the neat lines coloured on large-scale plans, the perfection of a landscape architect’s vision. The fifty-seven species of birds currently found here will no doubt remain, unperturbed by this return to something that looks like countryside, but isn’t. It is one of the ironies of development that biodiversity flourishes in these places that are only periodically disturbed, like military testing ranges, like abandoned industrial sites. It is a reminder of the resilience of the natural world, of the impermanence of many of our creations. It is also a means of convincing ourselves that there is virtue in the destruction we leave behind, that the raw earth can be soon colonised by ever-resourceful species. And, by association, that these quarries, these mines and spoil heaps and munitions dumps, are barely an intrusion in the life of the planet.

I think of JA Baker, cycling along the tracks and lanes of Essex in search of the Peregrines that obsessed him for ten years, on foot through the wet clay soils of winter fields, shrinking from the taint of humans by which the birds were spiralling to extinction. ‘We stink of death,’ he wrote in The Peregrine. ‘We carry it with us. It sticks to us like frost.’ By slipping free from the daily drive to work, the confined world of tarmac and concrete, Baker understood the curse we have placed on the animals and birds which flicker at the margins of our lives, like a warning whispered at the edge of hearing. The stink we carry is of petrol and limestone dust, of scorched rubber and hot tarmac, of carrion picked clean by scavenging birds on a country road. 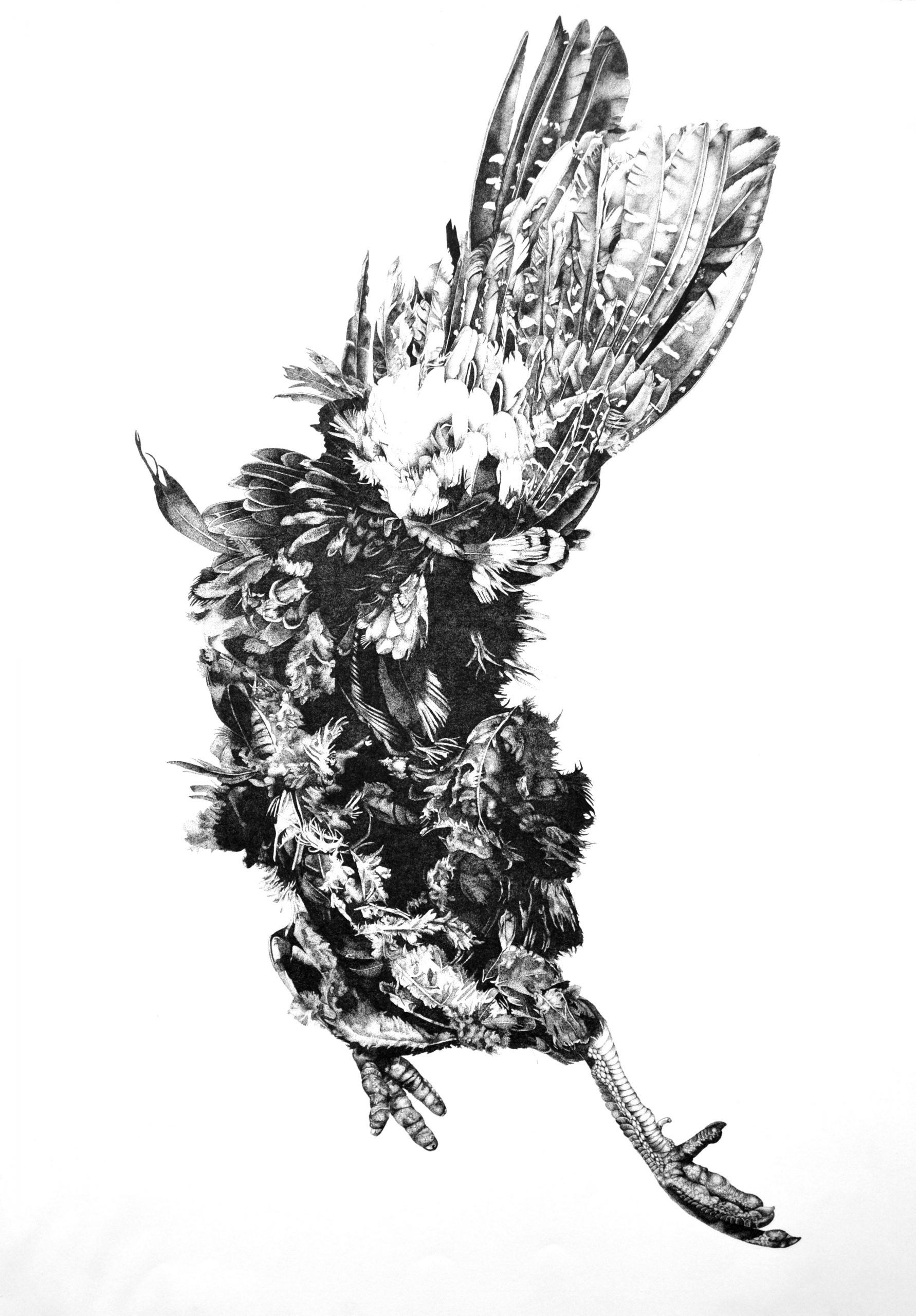