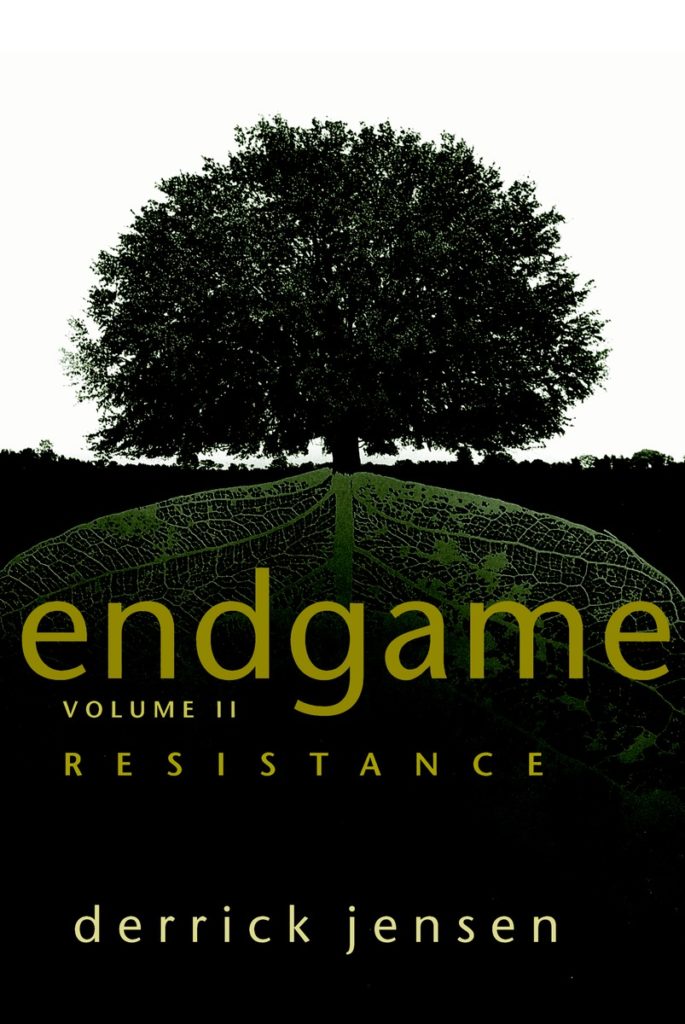 Akshay Ahuja
grew up in New Delhi and the suburbs outside Washington, DC, and now lives in Southwest Ohio with his wife and son. He works as a gardener at a teaching farm, and writes about food, plants, and the arts in their various wild and domesticated forms.
Share

This book is about violence: civilisation’s violence against the natural world, and Jensen’s belief that we need to use violence of our own to respond.

Premise Seven, from the early pages of Volume II: ‘The longer we wait for civilisation to crash – or the longer we wait before we ourselves bring it down – the messier the crash will be, and the worse things will be for those humans and nonhumans who live during it, and for those who come after.’

Endgame – and here I am summarising a sprawling and diverse book – is an argument for speeding collapse along. Strategies include dynamiting dams, shutting down refineries, disrupting electronic shipping networks, and breaching gas pipelines. Jensen relates conversations with friends – ex-military personnel, hackers, activists – who discuss weak points in the system. He argues that crippling the system will not be as difficult as one might imagine, and that everything is now so interlinked that it would take ‘fewer [people] than Jesus had apostles’ to bring it all down.

Jensen admits that violence terrifies him – ‘I’m glad I’m a writer,’ he says, throughout the book – and that he has never put these ideas into practice. His primary purpose is to convince the reader that non-violence has come to a dead-end in this particular struggle. Much of Volume II is devoted, then, to attacking the philosophical foundation of non-violence.

One element of this foundation is the belief that each person has a core of decency that can, eventually, be reached, perhaps only in the absence of physical compulsion. This conviction is a matter of faith – ‘core of decency’ is simply another way of saying ‘soul’ – and it is not surprising that most philosophers of nonviolence, from Tolstoy to Cesar Chavez, have been devout, if unorthodox.

Jensen does not work off this view of human relations. He has no faith in reaching the public (this is sensible, considering the likely constituency for collapse) and has given up on converting the CEOs of logging corporations. He views the relationship of such entities with us, the land, and its creatures as being closer to that between pathological abusers and the people they abuse.

Jensen, who was himself the victim of childhood sexual abuse, discusses the work of psychologists like Jane Caputi on the nature of abusive relationships, where returning love for hate simply allows the abuse to continue. Abusers rely on such treatment, he argues, since it lets them continue to get what they want without any consequences that they can appreciate. In this view of things, the abuser is not torn up with remorse about his actions and never will be. Such people may, for whatever reason, be constitutionally unable to feel such emotion. Either the core of decency is missing, or has been buried so deep as to be essentially lost. The abuser, then, is only going to stop when the person being abused gives the abuser no other choice. Jensen repeats this line several times.

I can accept all of this and still be at a loss for what to do next. Jensen is very cavalier about talking about ‘industrial civilization,’ as if this entity were easy to identify, isolate, and attack independently of the world at large. But his target tends to obscure what is actually being discussed. Where I live, many people will freeze to death without heating oil. If the electricity goes out, cars will crash, hospital life-support systems will shut off, huge quantities of food will begin to spoil. How many people is it okay to kill? And if our only goal is to create chaos, and if we believe (accurately) that the real root of our environmental problems is simply too many people, I can think of any number of increasingly terrifying solutions to this problem.

Jensen does not suggest any such measures, but he also willfully softens the human suffering that the collapse of this system is going to entail, and I not satisfied with his justification that it will be worse later. I had the same thought, while reading this book, that I have when seeing advertisements for new drugs from the pharmaceutical industry: ‘You are not wise enough to know what this will do.’ Industrial society is no less complex than the human body or an ecosystem – in cannot be, since it encompasses both – and I am not interested in snapping a single thread to see what will happen. I am not even sure that disruption will help bring about collapse: when a car is heading towards a cliff, how do you speed up the process, by shooting out a tyre or stepping on the gas?

The indigenous communities that Jensen looks to for inspiration – and who represent his success stories for violent struggle – were not interested in combating abstractions like ‘the colonial system’ or ‘industrial civilisation.’ They wanted something simpler: like an abused person, they wanted to be left alone. I prefer their example to Jensen’s proposals.

While I was making my way through Endgame, I was also reading Theodora Kroeber’s Ishi in Two Worlds, about the Yahi Indians in Northern California, and the last surviving member of the tribe, whom they called Ishi. When the Yahi tribe, after fierce fighting, had been almost exterminated by white settlers, the remaining members decided that, instead of continuing a hopeless struggle, they would hide. For over a decade, they vanished into a portion of their own land, now ‘owned’ by others, maintaining their traditions in the midst of people who wanted to kill them. How did they manage this? Kroeber writes:

Some of the Yahi sources of strength might be said to be that they were on home ground and that they were already skilled in what they had to do to live… Of very great importance to their psychic health was the circumstance that their sufferings and curtailments arose from wrongs done to them by others. They were not guilt ridden, nor were they ‘alienated from their culture.’ Their aims were modest, reasonable, realistic; their egos and ambitions uninflamed…

How much of this can we say for ourselves? Very few of us feel indigenous on the land where we live; and most of us have participated and continue to participate in the system that is destroying it. Guerrillas know the land better than their enemies, they care more, and they are willing to make larger sacrifices. They are also fighting for something real beneath their feet.

Jensen writes: ‘What do you want? The question is not rhetorical. Don’t just pass it by and move to the next chapter. Stop. Put down the book. Go outside. Take a long walk. Look at the stars. Pet the bark of trees. Smell the soil. Listen to a river. Ask them what they want. Ask your heart what you want. Ask your head. Ask your heart again. Then figure out how you’re going to get it.’

This is good advice. I don’t know what your surroundings will tell you. I usually don’t know what mine are telling me, locked away beneath the pavement, but when I can hear them, they don’t talk to me about systems, industrial or otherwise. This is the language of the disembodied human intellect. When I am lucky, they show me small ways to contribute to the land’s health and its future ability to sustain life. While barely significant, I am much more confident in the results of such activity than blowing up a pipeline.

If development threatens land that you love, though, and you have exhausted conventional options, by all means consider a variety of tactics. (And anything, anything, please, rather than another march; the Occupy people were more creative.) And remember, as Jensen points out, that nonviolent movements only succeed when there is a viable violent alternative. Listen to your temperament; you can decide which one you’d rather be.

People generally don’t keep doing things they hate, and Jensen lectures about these ideas almost constantly. As far as I can tell, he thrives on opponents. One feels this everywhere in the tone of this book. Jensen compares his writing to warfare, where he anticipates your objection and counters it before you can bring it up, just as soldiers try to reach higher ground before their enemy. I’m sure this makes Jensen a fantastic debater, but it is a bizarre way to think of readers. Such a writer will never leave out an argument because he is confident that he has already communicated the necessary spirit. Instead, we are all going to be plugged full of word-bullets, lest we ambush the author from an unguarded spot.

Endgame strikes me, then – despite its protestations at the end to ‘puzzle your own way through’ – as a very intelligent book that has minimal faith in the intelligence of its readers. It is about twice as long as it needs to be, and although I dog-eared dozens of pages, I may very well not have finished it if I wasn’t writing this review. Nonetheless, I am glad the book exists, and I hope you read it.

A story to end with: Gandhi, as you can imagine, comes in for a pounding in Volume II. Most of us have heard
some of the more extreme anecdotes, and it is hard not to have complicated emotions when thinking about him.

One story, though – which is not in this book – has always filled me with admiration:

A mother brought her son to Gandhi, and wanted him to tell the boy to stop eating so much sugar. Gandhi told her to come back in a week. She left, puzzled. Why a week? she asked, when they returned. Because, Gandhi explained, he had still been eating sugar himself, and he wanted to make sure that he could deliver the admonition with sincerity. Even with children – perhaps I should say especially with children, who are always being given hollow advice by adults – he refused to tell anyone to do something that he hadn’t done himself.

Now, an idea can be valuable without being practiced; many of the deepest ones exist only as aspirations, because they are impossible for most to us to live up to. But – as we try and mess up and fall short, a certain vehemence present while theorising tends to drop away. Jensen, for example, is very conflicted about what to do with invasive species, because he has first-hand experience hacking away at non-native bushes in his yard. If a dam that Jensen breached had drowned his neighbour’s daughter – if runoff from a flooded factory had poisoned a stream (further) – and if people without heating oil had denuded what was left of the forest around his house – well, he might still make the same points, but in a different spirit.

Fuck you, I think Jensen would say, getting ready for an argument, your caution is just another excuse for doing nothing. To which, I admit, I have no response. 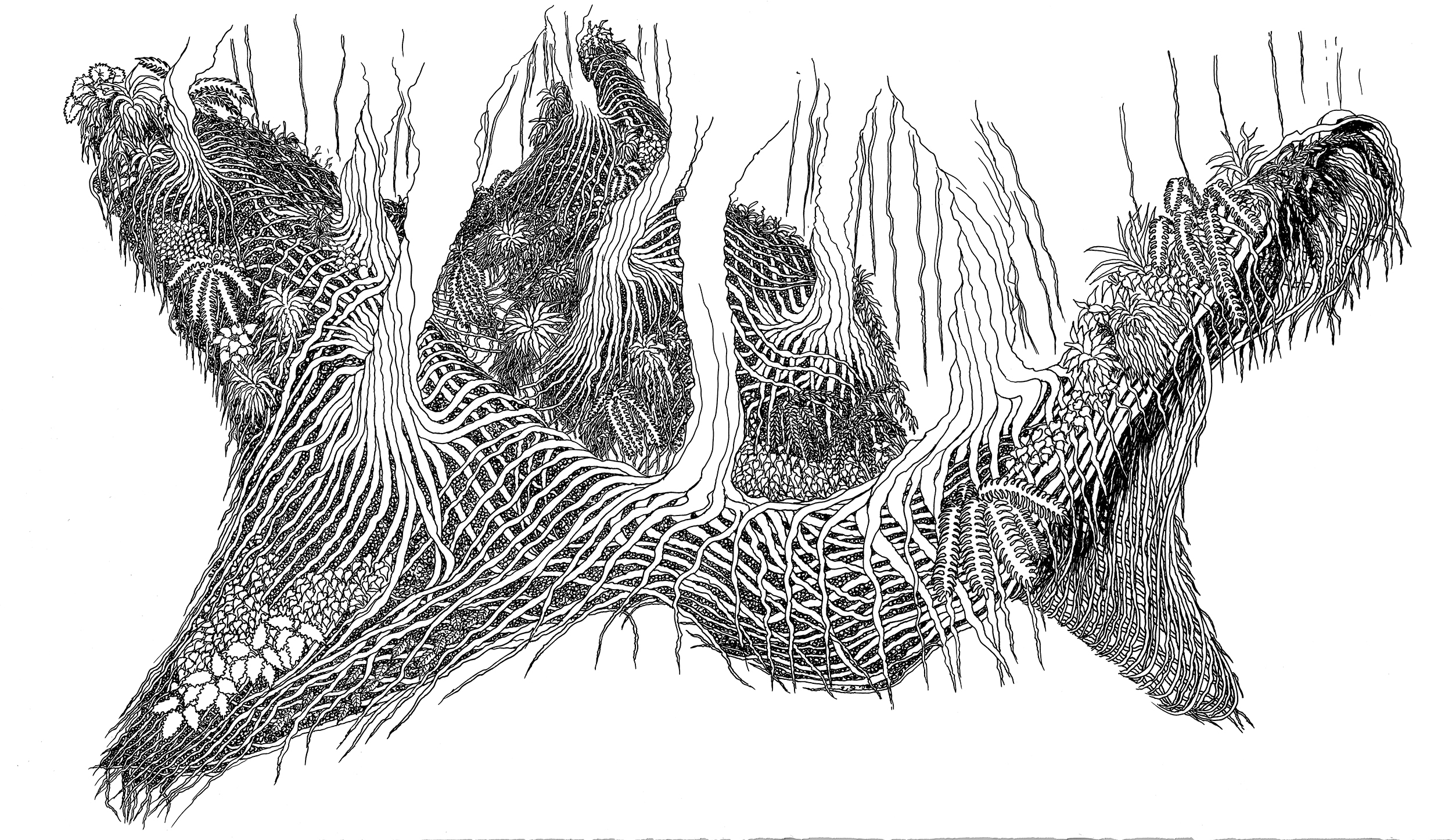