Skip to content
Kim Goldberg
is a frequent contributor to Dark Mountain books with her speculative poems and micro-fictions. She holds a degree in biology and is an avid field naturalist and performance poet. She has been known to win ornithological swag in competitive birdwatching events on Vancouver Island.
Share
There were wild horses. And a beach. And a storm, I think. No, wait – that’s the cover photo on Susan Musgrave’s timeline. Maybe there were only some big waves the size of tiny houses on wheels, rolling into shore like a sustainably designed refugee camp, each with an innocent Syrian family inside just trying to survive the civil war at Christmas time, desperately awaiting tins of plum pudding from overseas that would never arrive because Indiegogo froze the plum pudding campaign (which had broken all crowdsourcing records in its first 24 hours) after the word ‘dessert’ was red-flagged by the US State Department’s poorly programmed algorithm searching for long-tail keywords – in this case ‘desert’ since that can signify a variety of potentially terrorist activities, as can ‘Bactrian’ or ‘bivouac’ or ‘Babel’. All the tiny doors of the tiny houses flew open as soon as the tiny wheels stalled in deep sand, and the Syrian families were tossed out onto the desert on tiny tidal waves of urchins and starfish and ling cod. The families became wild horses stampeding down the beach to escape the long-tail keywords pursuing them. (Everyone knows horses are afraid of long-tail keywords.) The sharp report of their hooves sounded like machine gun fire, but this was most likely due to the State Department’s residual power of suggestion, so I urge you to rise above it as I have tried to. And from our arisen position, we can now see that the horses are not running down a beach or a desert or a sandlot of any sort but rather the hard ceramic tiles of Woodgrove Mall, parting the red and green seas of Christmas shoppers (as Moses himself did) to expose the International Food Court for the CIA mind-control front that it is: a deep-fried spicy Szechuan offshoot of MKUltra.

I am crouched beneath the battery spin-rack in the Everything for a Dollar Store, surreptitiously photographing the entire Food Court spectacle through the window. I am sitting on absolute fucking gold here. No one but me has this story. This could be my comeback. 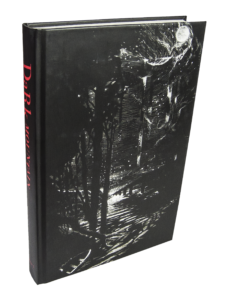 The Spring 2014 issue is a classic Dark Mountain collection of essays, fiction, poetry and artwork.