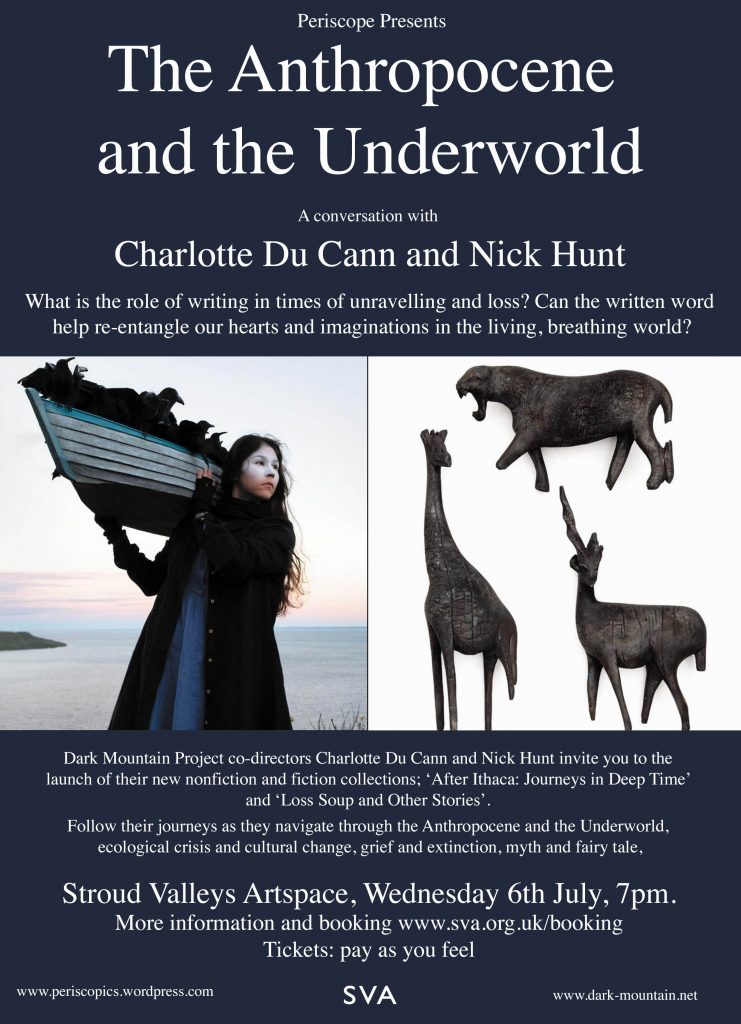 What is the role of writing in times of unravelling and loss? Can the written word help re-entangle our hearts and imaginations in the living, breathing world?

Dark Mountain Project co-directors Charlotte Du Cann and Nick Hunt invite you to celebrate the launch of their new nonfiction and fiction collections, After Ithaca: Journeys in Deep Time and Loss Soup and Other Stories with a talk and readings at Stroud Valleys Art Space on Wednesday 6th July at 7pm. Follow their journeys as they navigate through the Anthropocene and the Underworld, ecological crisis and cultural change, grief and extinction, myth and fairy tale, in search of meaning and kinship with the ancestral Earth.

After Ithaca: Journeys in Deep Time and Loss Soup and Other Stories are Dark Mountain’s first single-author collections, published in association with Greenbank Books.

Part memoir, part essay, part travelogue, Charlotte Du Cann’s After Ithaca is a real-life journey of descent in a world on the tip of crisis. It is set in the Peruvian rainforest, in the backrooms of Suffolk towns, in Japan, in France, Australia, in the desert borderlands, in borrowed houses and Occupy tents, in kitchens and burial chambers, underneath a lemon tree on an abandoned terrace. The book revolves around the four initiatory tasks of Psyche, set by Venus, the goddess of love and justice: four territories that map this search for meaning and coherence in a time of fall.

The fourteen stories in Loss Soup, Nick Hunt’s debut collection of short fiction, travel from sixteenth-century Mexico to a post-collapse near future; from the fabled Dinner of Loss to the swampy coasts of the New World; from the Great Pacific Garbage Patch to a cabin haunted by the ghosts of our extinct hominid ancestors. All the stories revolve around a different form of loss. By turns blackly funny, disquieting and fantastical, Loss Soup is an exploration of the Anthropocene, climate chaos, the Sixth Extinction and the strange new worlds that might lie beyond.

The event will consist of a conversation between the two authors, with readings from their books, followed by a Q&A.

For further details and booking: https://www.sva.org.uk/events/2020/3/28/afterithaca-losssoup