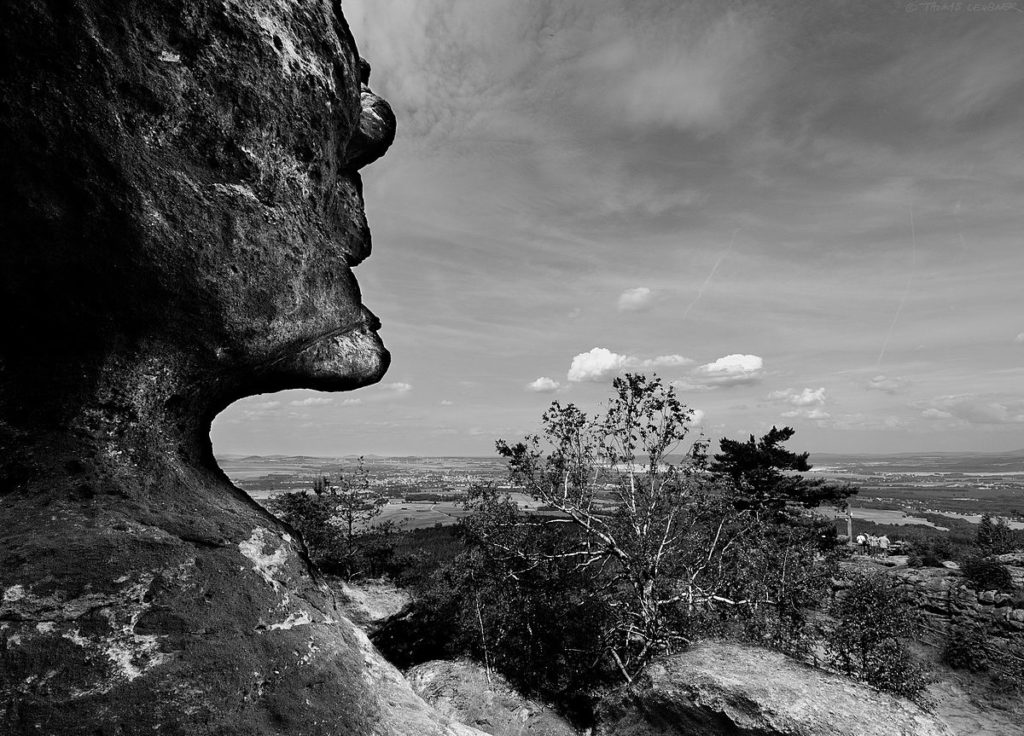 Photogaph by Thomas Leubner
Ramon Elani
lives with his wife and son among the hills and forests of Western Massachusetts. He holds a PhD in literature. His doctoral work focused on critiques of civilisation and continental philosophy.
Share

Should we fight or should we run? In The Origins of Political Order Francis Fukuyama noted that civilisation or ‘the state’, as he calls it, tended to develop in areas that featured geographic boundaries that prevented people from escaping it. Mesopotamia, for example, is surrounded by rivers and deserts. China, by deserts and the Himalayas. For as long as civilisation has existed there have been those that would rather die than be absorbed by it. Some stood their ground and decided to fight and die where they stood. Others ran. They fled to the forests, the hills, the plains beyond the reach of the armies of the civilised. There they rebuilt their communities and reestablished the old ways. Over time, of course, the cities grew and their need for lumber, slaves, and lands to till for crops continued to grow as well. The resisters were forced to run again, deeper into the forests and the wilderness. This has been the history of the world. The free
communities have almost been entirely wiped out and civilisation, the enemy of life, threatens to gobble up every last bit of land and water.

Most people, I believe, simply don’t want to think about such things. They distract themselves and luckily we have a culture that produces distractions above all else. They know that things are bad but they shrug and essential resign themselves to enjoying their lives for as long as they can. A hedonism born of despair. In 1962 the Hungarian Marxist philosopher Georg Lukacs wrote about the Grand Hotel Abyss, ‘A beautiful hotel, equipped with every comfort, on the edge of an abyss, of nothingness, of absurdity. And the daily contemplation of the abyss between excellent meals or artistic entertainments, can only heighten the enjoyment of the subtle comforts offered.’ Some people might hope that technology will miraculously save the day. Some might even think that god will come down from above to set things right, like at the end of a Greek tragedy. Technology has given us many gifts, it is true. But every one of those gifts has turned to ash in our mouths and brought with it new, unimagined horrors. For those who do have the courage to look into the abyss the question remains, just like it did for our ancestors: do we fight or do we run?

For those who love life its impossible not to want to fight against the madness of civilisation. To try to protect as much of the wild land that remains as possible from development, industry, and exploitation. To try to prevent the extinction of the countless species that are currently at risk of disappearing from the earth forever. To try to reduce the tonnes of waste that our society produces and dumps into the dirt and water, which are becoming less and less able to support life. In short, it is impossible not to want to try to save the world from the horror that civilisation has unleashed upon it. How can we not feel the urge to petition lawmakers despite their narrow­mindedness and greed? How can we not march together and chant for justice for humanity and the earth? How can we not chain ourselves to trees and raise awareness of the dire condition of life on the world where we live? How can we not build organisations, networks, create alliances, and movements to make change?

And there are other ways to fight as well. Some plot in the night. They get the guns and the spears and stand before the enemy, risking everything. They go to jail. They are gunned down by assassins. They mail bombs. They form cells. They set fires. They remind us that ‘the earth is not dying, it is being killed, and those who are killing it have names and addresses.’ They know that a violent, insane system cannot be reasoned with. It can only be destroyed. No amount of pleading will convince the governments and companies to stop. It is a fantasy to believe that they care about what we want.

And yet deep down do we really believe that we can succeed, no matter what tactics we adopt? Late at night, when we are alone with our thoughts it’s hard to banish the thought that there is nothing we can do. That we have already lost. That this is all make believe. The politicians either don’t care or will not act. There are not enough of us to change the minds of the majority. There are too many of them and they have too many guns. And most heartbreaking of all, we have simply already done too much. More and more the scientists are reporting that the damage done is irreparable. The earth is getting hotter and hotter. Sea levels are rising. Lakes and streams are drying out. Forests are dying. Deserts are spreading. And through all of this the human population keeps growing and growing. No matter what kind of cars people drive, no matter what kind of food they eat, and no matter what kind of energy they use to run their air conditioners, more people means more carbon, more waste, and more destruction of non human life. Not to mention the fact that it takes the climate quite a long time to catch up to us. Much of the warming of the earth that we are experiencing has been caused by carbon that released hundreds of years ago during the dawn of the industrial age. What in the name of mercy will things look like when the atmosphere has caught up to what we have been doing since then?

So, if we can’t fight then we must run. What does that look like and how is it different from a politics of despair? No matter how ingrained our myths of human exceptionalism, our needs are the same as every other organism. Survival. We cannot survive without the earth. But we can survive without civilisation. We did for most of our history and, in fact, it is the greatest threat to our survival and the survival of other forms of life on this planet. More and more, people are beginning to rethink what it means for things to get better, what it means to survive. For a long time we have been taught and conditioned to fear the end of the world. To fear catastrophe. But catastrophe means ‘to overturn’, like soil or compost. And it is hard to imagine that the end of this world will not bring the possibility of a better one.

We should not forget that humans have lived in the desert for our entire history. We have known how to find food, water, and shelter in the wasteland. This knowledge is not gone, even though we have forgotten it. There are those out there who keep the knowledge alive, sheltering and protecting it like a tiny guttering flame. In colonial Madagascar many tribes fought the French and died. Many tribes gave up and became slaves. Some tribes ran into the jungles. They hid deep in the forests where the French would not find them. They continued to live as they had and refused to adopt the ways of the invaders. They waited for the French to go away. It took sixty years of waiting but eventually their prayers were answered and the French went home. Colonialism was unsustainable. It was oppressive, exploitative, and destructive. Thus it could not survive. This is true for anything that is oppressive, exploitative, and destructive. It cannot survive. This is especially true for civilisation, which is the logic of oppression itself.

So perhaps the best thing we can do is run. Run into the woods, into the jungles, into the deserts, into the mountains, and the seas. Abandon our cities and farms, like the ancient Mayans, and return to the path of survival. Remind ourselves of the skills that almost all of us have forgotten. Remind ourselves how to survive. And wait. Wait for six thousand years of domestication and greed to collapse under the weight of its own violence and cruelty. Who knows how long it will take? Climate scientist James Lovelock has predicted that by the end the present century the effects of climate change will have reduced the human population to one billion or less. Lots of people think Lovelock is a quack and of course there is no way to know whats going to happen in the future. The important point is that we have to at least begin to entertain the idea that we may not be able to stop what’s going to happen from happening. Perhaps by continuing to try to hold onto the lives we have now and fighting against the tide, we are just ensuring that, as conditions deteriorate, we will be among those billions who succumb during the mass migrations, water shortages, or political upheavals. If we leave, as many of us as possible, we will survive and be able to leave something for those who will come after us. We can teach ourselves and each other how to gather wild edible and medicinal plants, how to build shelter using fallen trees and mud bricks, how to hunt, how to make fire, how to find water, how to survive.

So if we run, we do not run away from reality, but rather towards a new dawn. This is not a journey toward delusion or despair. It is a journey toward the within and without. It is a journey deep into the memories that we bear, the memories in our hearts and in our blood. We journey within in order to find that which we shall bring forth back into the sun of the present. When the time to fight comes, whatever that fight may look like, we must stand boldly with the dreams of ten thousand years at our backs.

Tales from the Bardo