Skip to content
Paul Kingsnorth
is the co-founder of the Dark Mountain Project, of which he was director from 2009-2017, He is the author of nine books - three novels, two poetry collections and four works of non-fiction - all of which, it turns out, tell the same story: how we walked away from the wild world, and how we might get home again, if we can. He runs the Wyrd School which teaches wild writing and art and lives in the west of Ireland.
Share
Five years ago today, I stood in the draughty backroom of a pub on the banks of the River Thames, on a slightly elevated stage next to a man I didn’t know very well, and together we launched the Dark Mountain Project. Perhaps 50 people were there. It rained, I think.

What did I think I was doing? Trying to recover the past from the vantage point of the present is always hard: perhaps it’s impossible. We tend to mythologise our own stories, or at least to construct after the event a narrative that makes them seem more seamlessly interlinked or rational than they actually were. ‘We take almost all the decisive steps in our lives’, wrote WG Sebald, ‘as a result of slight inner adjustments of which we are barely conscious’. This little event turned out to be a decisive step in my life, and it’s taken  me about five years to become more conscious of what those adjustments were. 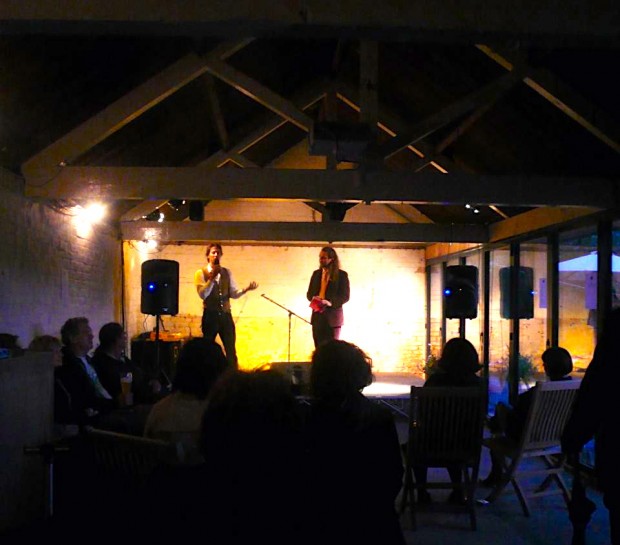 At the time and on the surface, what I thought I was doing was quite simple:  I was starting a new literary movement. With Dougald, my co-conspirator and soon-to-be friend, I had written a strange little manifesto, which demanded that its readers open their eyes to the huge shifts which our world was undergoing, and then start to write as if they were real. This was always supposed to be an artistic rather than a political document. For me, its inspirations were not Leninists or Maoists but Dadaists and Vorticists. Like its forebears a century ago, I wanted this manifesto to emerge from the collapse of the old world and herald something new.

Despite this grand and probably self-regarding ambition, the movement I envisaged emerging from this little document was to be something quite modest. I thought we might get a writers’ circle together, perhaps. Maybe we’d meet every couple of weeks in the pub, ten or 20 of us, and talk about how to bust open the rotten citadels of literature and pour the healing waters of uncivilisation down upon its thirsty inhabitants.

Things did not go quite to plan.

Five years on, this Dark Mountain Project is many things. It is a sprawling global network of like-minded people. It is a small ‘organisation’ which produces two books a year of art and writing. It is a series of happenings and comings-together, events and festivals and gatherings. It is a conversation. It is a search for new stories. It is one part of a much wider global shift towards a new way of seeing nature and civilisation. It is a controversy and a call to action and a call to contemplation. It is a journey. It is a place you can come to give up hope so that you can find it again in a new shape. It is a crucible and a strange shape-shifting beast. Even after five years, it is almost impossible to describe the thing. But we know it works, and we think it is needed, because we’re still here and we’re still running to keep up.

A few weeks back, Dougald and I gave a talk at Schumacher College in Devon, in which we challenged ourselves to draw out some lessons we had learned on this five-year journey. You can watch a film of that event at the top of this blog post. I thought I’d mark this anniversary here by offering up five lessons I’ve learned: one for each year. I’m a slow learner, but I’m pretty sure that through this journey I’ve picked up a few useful lessons about myself and about the world I’m living in, as well as something about this odd thing I spawned. If that’s the case, it’s thanks to the many people I’ve met this past half decade, whose company and wisdom and friendship are the most valuable thing I will take away from it all in the end.

Seriously. Having a plan is simply setting yourself up for failure. Look what happened to me. More usefully, look at what’s happening around the world: there is no shortage of plans for a Sustainable And Just Society, and none of them are going anywhere other than the remainder bins of bookshops. Having a plan is a recipe for frustration. Having intentions and precepts and guidelines and nimble feet, on the other hand, might get you somewhere, if luck is on your side for a while.

2.  There is a space between hope and despair

Our manifesto and some of our early work was interpreted by some, particularly campaigners and activists, as promoting  giving up or giving in, hopelessness and despair and inaction. Accepting that great changes were underway, and that our powers were limited, was seen by some people as a betrayal of a better possibility. From this vantage point, I can understand this reaction. But there is a space between hope and despair, which it is necessary to inhabit. False expectations and foolish dreams lead to the very despair they claim to want to banish. And that despair  is a rational reaction to much of what is going on in the world; sometimes it is necessary to embrace it. Between the forced hope and  gritted teeth of the activist worldview and the dark hopelessness of the  apocalyptic narrative lies a space that is worth sitting in for a while.

We are in an age of climate change and mass extinction and much of this is irreversible. This is what we were given to live through. To be able to look at what the human machine is doing to this living world without feeling grief or despair is an impossibility for anyone who experiences normal human emotions. Grief is not only a natural reaction to the state of the world today, it is a useful one. It is something that should be navigated and understood and accepted and discussed. Like the death of a loved one, the current death of much that is good in the world is something that can’t be denied or wished away: it has to be lived with. It doesn’t follow from that nothing good will ever happen again, or that you can be of no use in the world.

… and neither are you. Barely a week has passed over these five years without us receiving a communication from somebody, somewhere in the world, along these lines: I have felt like this for years, I thought I was alone, my friends think I’m mad, I’m so glad to find you. What this tells me is that there are many people in the world whose honest reaction to the current state of things can’t be incorporated within either the mainstream story of progress and growth, or the acceptable dissident stories about enlightened people power leading to radical change.  In this context, our work of tentatively exploring new stories and new ways of seeing is hopefully useful.

This was the central insight of our little manifesto, and it’s one that I think has held up. Everything is a story: everything about the way you see the world, everything you think about the way the world works, and who you are and whether you’re anyone at all, and how things are organised and what change means and whether it matters. Everything. All cultures and all civilisations run on stories like cars run on fuel, and like fuel, the wrong story can be poisonous. I get the sense now, in a way that I didn’t five years ago, that this recognition is becoming more widespread.

The world has changed a lot since that day five years ago. Back then, an economic crisis was just beginning and nobody knew how quickly it would play out. Back then, people still talked about preventing climate change rather than mitigating it. The world has changed a lot, and not changed at all. But some shift is being played out around us: some change in the weather, some groping towards a new way of understanding the world. Something is changing; something has broken and will not be put back together. This shift will long outlive us, but if we have played some part in it – well, that’s not bad work.

More than anything, perhaps, I’ve discovered that this strange expedition up this forbidding peak is more enlightening and enjoyable (not to mention safer) if it is not undertaken alone. And I wonder what lessons my fellow mountaineers can draw from this half-decade. I’d love to hear them.