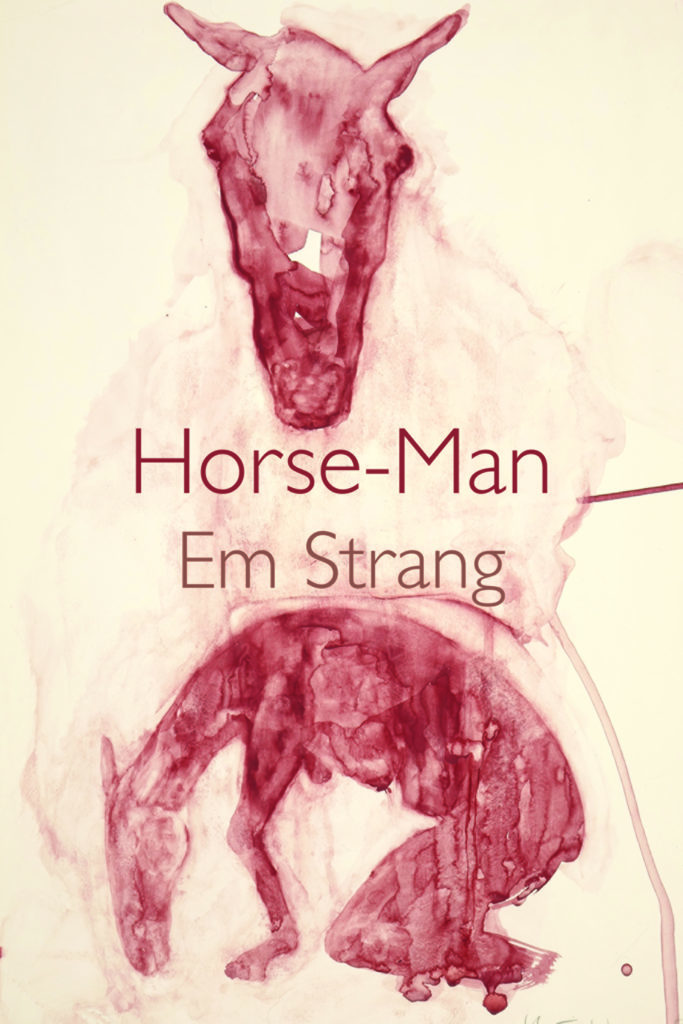 Cover of Horse-Man by Em Strang with illustration by Kate Walters
Em Strang
Em's work has been published widely in anthologies and journals. She was Dark Mountain's poetry editor from 2014-2016 and spearheaded Issue 10 - Uncivilised Poetics . Her first collection, Bird-Woman (Shearsman, 2016), was shortlisted for the Seamus Heaney Best First Collection Prize, and won the Saltire Poetry Book of the Year.
Share
All I’m really interested in writing about these days is grief and love. What has happened to these two expressions of emotion in our times? It’s as though our western, civilised culture is moving determinedly away from them both; at least, away from the vulnerability that accompanies their true expression.

I don’t know how to write about either of them, which feels like as good a reason as any to try. I don’t know because it’s not really possible to articulate the whole shebang of love and grief in words on a page. I had to get Horse-Man to translate, because when I think about love, I think about compassion, service, adoration and awe, joyous interconnection with others; but it’s much more than this, of course. Horse-Man laughs at me when I try to set boundaries up around love or grief, or when I try to control them by setting them apart. He says it’s only when I stop thinking about love, that I get it, this Unfathomable. He says love is the number one most annoying concept for the rational ego-mind, because it cannot be corralled.

I’ve been running workshops in Embodied Poetry for a few years now, and my intention is always to create a space where both these emotions (amongst others) can be explored and transmuted through artistic expression. I hold a safe space for participants to work on their edges, which often means sharing moments of deep vulnerability. Horse-Man says it’s impossible not to fall in love with everyone in the room, and he’s right. It’s not romantic love, nor sexual love, nor I’ll-love-you-if-you-love-me-back love, nor even Zen-like compassionate love, although it is a form of suffering-with – com-passione. It’s spondic love, something author and founder of the Evolutionary Collective, Patricia Albere, talks about in her recent work; love that arises in the space between us, a space which is potent, interconnective and indisputably – though probably outwith the confines of empiricism – alive. ‘Spondic love, Albere writes, ‘is the experience of I am; may you be.’ It’s as though love ‘comes from some place that’s deeper than your personality loving them’, or, as Franciscan and scientist, Ilia Delio, calls it, ‘a spontaneous energy centre of relatedness.’

I’ve been contemplating this over the past couple of years, watching myself, seeing how I react in certain situations where spondic love is either alive or shut off; and I’ve come to realise that the dark times we’re living in demand of me this kind of loving, to degrees I haven’t yet fully understood. I have to shake off all previous conclusions about love and start again, without recourse to society or culture or civilisation. I have to risk loving in the most unlovable places (in prison where I work, for example) with the – seemingly – most unlovable people. I have to love in an interactive, interconnected way, which turns love into active dialogue or multilogue, where nobody and nothing is left out. There’s an underground authenticity to this loving, and it’s something that will likely be frowned upon by establishments, institutions, groups and systems, because it doesn’t fit into a neat definition. It isn’t marketable and it doesn’t adhere to rules. Indeed, it crosses boundary after boundary without so much as a backward glance. It’s empowering and, therefore, threatening to every status quo. Horse-Man says this is also true of grief. Francis Weller writes:

Grief is subversive, undermining our society’s quiet agreement that we will behave and be in control of our emotions. It is an act of protest that declares our refusal to live numb and small. There is something feral about grief, something essentially outside the ordained and sanctioned behaviours of our culture. Because of that, grief is necessary to the vitality of the soul.

How can we grieve together as we live through end times? I don’t mean Elizabeth Kübler-Ross’ five steps to personal grieving (though that’s as good a model as any); I mean being inside an experience of profound loss and suffering alongside others, day after day, year after year. It sounds grim – and it is – but the more I step honestly into the space of grief and bear witness to the loss all around me, the more my life and all its entangled details take on sacred meaning. As species and systems continue to collapse and die, I find myself in love with everything – not just things and beings, but even the human errors we’ve committed in setting up the many toxic systems. It sounds nonsensical to love the errors that have led to our downfall, and I think that’s exactly right – this love is far bigger than our contemporary cultural understanding of it; it’s literally outwith common sensory experience. It seems to me that loss on this scale is an invitation to a kind of love experience that finally, deeply accepts suffering into the human heart. Horse-Man points out that humans down the centuries have understood and articulated this. Most recently, I’m reminded of Ocasio-Cortez and her response to Trump’s racist tweets and fuelling of white supremicist rhetoric: ‘We need to learn to love bigger,’ she says, ‘to bring them back.’

I’ve no idea what shape grief will take over the coming years, but I’m in for the long haul. The loss of human and nonhuman life, of systems and ways of living isn’t showing any signs of abating, and I think making friends with suffering and loss is one way through that promises a degree of sanity. Perhaps it’s because grief and love exist as a call and response to one another, a daily reminder in these times of the paradox at the heart of the human experience. It’s obvious to me that I can’t live a deeply human life without either, and that they are – everyone knows – intricately linked: we only grieve what we love.

Horse-Man, my second collection of poems, isn’t really about horses and men, or what happens when they come together in a new hybrid form (though that’s not altogether inaccurate). Horse-Man is about grief and love, and I wrote it because these are the poems that came along in response to the second decade of the 21st century, and also because I’ve become obsessed by a quote from Jalal-ud-Din Rumi:

‘The heart that loves me is a wound without shield.’

the peony has fully opened and is

It hangs in the long grass

Here are my parents:

one in a tailor-made black suit,

the other only half visible through fog –

that slow institute of grief.

I turn the photo over, let them go

my mother an endangered species,

But inside my mind’s eye, I call the Dodo.

I call the Black Spider Monkey from deep down

in the hunger of things.

The kindness of the day

is the white horse that stands in the rain

The horse is standing below the hill

where the young woods begin

and the river used to flow

It knows good grass and rain

since these are the days of rain

and the blue-black nights of rain.

The white horse is waiting

for the river to refill,

since these are the days of forever

and the blue-black nights of forever.

The kindness of the night

is the rain that falls on the white horse

Horse-Man is lying in the grass, in the bog iris and buttercups. He’s easy, glorious, but I can’t prove it, except perhaps to the early fisherman with his ropes and old rowboat on the open bay. Perhaps to him or to his boat, I could say that when the sun beats down like this, Horse-Man shines in the buttercups and the bog iris, in the tall lush grass. Perhaps the boat would nod across the bay and perhaps the fisherman would agree and say that when the wind blows – this soft summer breeze – the bog iris move like teeming people in a city move, in random, perfect patterns that mark each one out and then abandon the difference.

Horse-Man is published this month by Shearsman: https://www.shearsman.com/store/Em-Strang-Horse-Man-p133146347
For details about Embodied Poetry see Em’s website: https://em-strang.co.uk
Wee nod to Bruce at https://brucearcherkerr.com/about/ for his inspiring words on spondic love! 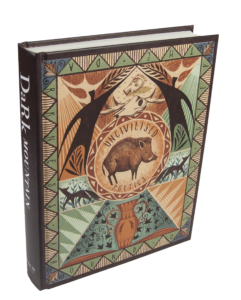 The Autumn 2016 edition is a special issue that explores the importance of poetry and the poetic.