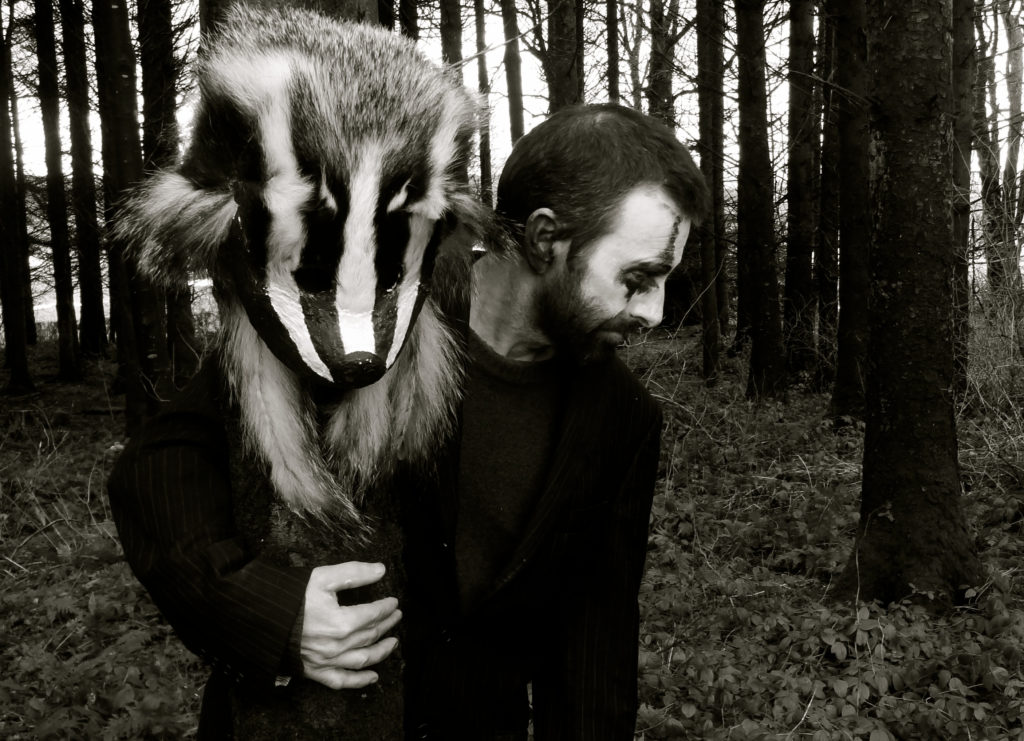 Dougie Strang performing 'Badger Dissonance'
Dougie Strang
is a writer, performer, and storyteller. He sits on the Dark Mountain Steering Group and has co-created and directed many of Dark Mountain’s on site performances, including Liminal (at Uncivilisation Festival) and The Night Breathes Us In (Festival of the Dark, Reading). He lives in South West Scotland by the River Ae.
Share
For a year, the American writer Barry Lopez pulled over whenever he passed a dead creature on the road. Animal or bird or reptile, he picked them up – sometimes he had to scrape them up – and took them away to be buried and honoured. When asked why he bothered, he said: ‘You never know. The ones you give some semblance of a burial, to whom you offer an apology, may have been like seers in a parallel culture. It is an act of respect, a technique of awareness.’
My first was a roe deer on the A75. I’d passed it already but this time it spooked me, its dead eye hooked me. I kept driving, got home, put a spade in the boot, went back. Its belly was swollen, crows had started in on the mouth. Cars were slowing, suspicious as they passed: ‘What’s he doing, bothering the roadkill?’

I dragged it down a gully, away from the road. A stream, some birch and elder, the usual cans and bottles and torn plastic. I felt seedy, like a murderer hiding the body. I dug a hole beneath a holly tree and the wind, I swear, the wind played pibroch in its branches – a lament. I tucked the deer into the hole and promised that I’d return.

In 1956, in a suburb of Chicago, Leon Festinger joined a cult. Aliens were set to destroy the planet but they, the chosen ones, would be saved. Dorothy Martin, the cult’s leader, prophesied the date, and they gathered at her house to await the end of days. This is a true story. Leon Festinger was a psychologist. He’d infiltrated the cult to find out what might happen on the off chance, the remote possibility, that there would be no death ray, no shiny UFOs come to whisk them to safety.

The sun rose and the sun set. The paparazzi of the day gathered outside the house to await the cult’s response to the non-ending of the world. When prophesies fail there’s a dissonance, when the facts clash with what we believe it creates what Festinger termed ‘cognitive dissonance’. It hurts our head and often, to soothe, we’d rather twist the facts than break our faith or hear a different story.

Dorothy Martin informed the press that she’d received a communication from the aliens, in which they told her that because of the strength of her belief, and that of her followers, because of her virtue, they, the aliens, had decided to give earth a second chance. She’d saved the world and, best of all, in the aftermath, the cult’s following continued to grow. Cognitive dissonance – how we’ll avoid it, how we’ll hear only what we want to hear, and see only that which we want to see.

I killed the fox myself. Driving home late over the B729, the road empty, the night frosted and starry. A glint of green eyes and then a bump and braking fast, and running back.

The fox was surprised, sprawled awkward on the road, the green fading from its eyes. I picked up its hot fox body and put it in the back of the car and drove home slow, slack-jawed, with the windows wide open, letting in all the dark of the night. And in the morning, I buried it in the garden, offered up my hapless apology, and jumped in the car and drove to work.

In December 2012, Jyoti Singh got on a bus in New Delhi. She was beaten and raped on the bus and died a few days later from her injuries. That same week, my wife found a hare on the road and carried it home. These are her words:

I’m carrying the hare along the road. One of its back legs is hanging by a single tendon, blood seeping slowly in the cold. It’s early morning, but the hare is late. The school bus has taken it by surprise, for the last time. I’m holding it like a new born baby, one hand beneath its head, the other beneath its backside. It’s heavy. It weighs roughly as much as a full grown, well-fed tomcat. It’s the kind of weight I’d prefer to sling over my shoulder.

For some time now, I’ve been unable to let the images go: the bus in the semi-dark, the young woman and her male friend; the blood on the men’s hands and all their wide eyes in the confines of the vehicle; the metal air; the woman’s voice which I can hear, again and again, no matter where I look.

The body is still warm and limp, still supple, and I keep half-expecting its eyes to blink, its legs to jerk awake. I half-expect the hare to jump and charge away from me. But it doesn’t. I carry it into the woods and put it down beneath a rhododendron bush. I lay it out in such a way that the gashed leg is invisible and it looks, it really looks, as though the hare is wide alive and running. It doesn’t matter whether I’m doing this for me or for all hares.

I find a few branches and twigs and make a kind of woody tent over the body. I don’t do this for other roadkill, but I’ve been watching the hares all year – there’s a pair. Or there was. They circle the house like sentinels, beginning on the eastern side with the sun and working their way round through the orchard, past the hen-run and into the woods. I watch them through the windows, their black-tipped ears, their long, powerful hind-legs that work like suspension coils, easing the body up and forward, down and forward, perpetually sprung; ready, I supposed, for the unexpected.

By now it’s a familiar story. The woman with a young, smiling face and soft skin. Her softness in the last light of the evening. All the shouting men, their mouths, their drenched clothes.

It’s a small back road with little traffic, but the school bus passes twice a day and the driver doesn’t mean to hit it. He’s late and the kids are waiting, out in the cold on a corner of turf.

I stroke its long ears back against its head, stroke its fine coat, white belly, small face. Hares have kinetic skulls – they’re jointed – which allows for a degree of movement between the front and back sections. It helps absorb the force of impact as the hare strikes the ground.

The iron bar. The shadow faces. The quiet glistening of the steering wheel, an empty glass bottle, an eye.

Badger came last. I found it slumped on a humpback bridge not far from home. It was ill-shaped, greasy. More half-filled sack than badger. It’s the first one I’ve seen in the area, dead or alive. It’s dairy country, and even though they’re protected, and though there’s no cull proposed for Scotland, the farmers quietly ensure an absence of badgers. Because badgers are dissonant: they contradict the story our farmers like to hear – about how they’re in charge, how they have the right to protect the herd, for all our sakes.

This one had no need of the cull. No need for shotgun pellets or terriers at bay. Its head had been crushed beneath the wheels of more than one car. So much so that when I dug up the bones a year later, I thought the skull had been stolen, until I noticed the fragments: the curve of an eye socket, a shattered jaw.

Despite the smell and the flies, I carried it home, hands clasping a protective loop, its broken head at my heart.

There’s no template for making sense of this. In her poem ‘Frontier County’ Karen Solie says that ‘our separateness / among separate things unites us: a violent wonder / at convergence.’ But badgers are dissonant, and so are the foxes and hares and the roe deer, and I’m sorry, my dears, but there’s little wonder this time, only violence and forgetting, so that we really don’t see the rags of fur and tattered feathers on the roads, the splinters of bone in the verges. We don’t see the congealed blood, like dark blisters, on the tarmac.

Grief is a vessel, a conduit for the living and for the dead. By reflecting on the lives and deaths of these creatures, by honouring them, perhaps we help to carry them home.

Badger Dissonance was written and performed by Dougie Strang, with the exception of ‘Hare’, which is from a prose poem by Em Strang. It was performed on the opening night of In Other Tongues with musical and sung accompaniment by Kayne Coy. The performance included the creation of a shrine to each of the animals. Barry Lopez is quoted from his essay ‘Apologia’ (University of Georgia Press, 1998). Karen Solie is quoted from her poem ‘Frontier Country’, which appears in the collection Pigeon (Anansi Press, 2009).

Em Strang is a poet. Her collection Bird Woman, which includes ‘Hare’, was shortlisted for the Seamus Heaney First Collection Poetry Prize and is available in the Dark Mountain Online Shop. Kayne Coy is a singer, musician, and Gaelic scholar.