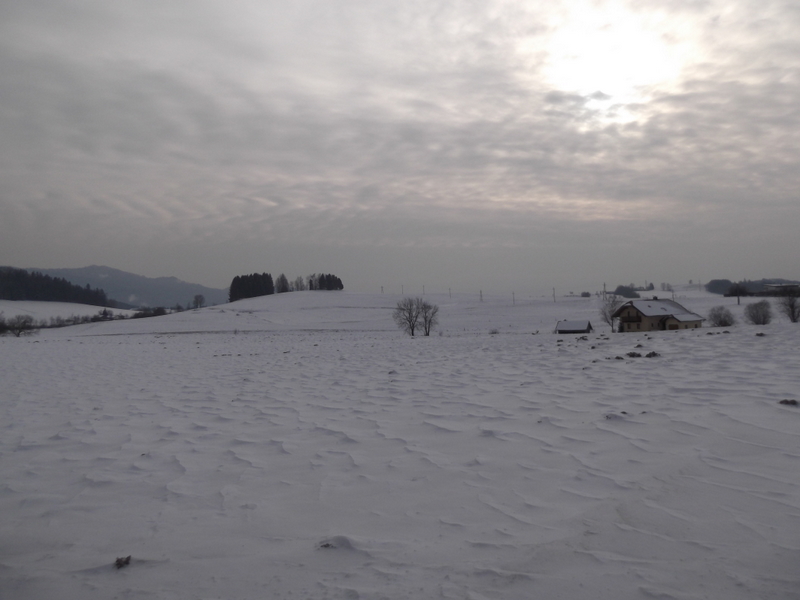 Nick Hunt
Nick is the author of three books about walking and Europe, the most recent of which is Outlandish, and a work of gonzo ornithology, The Parakeeting of London. He works as an editor and co-director for the Dark Mountain Project, and has contributed short stories and essays to many of its issues.
Share
Crossing the border from Bavaria to Austria, I passed through forests so deep in snow that the trees looked like melted candles. Dense growths of icicles hung from the roadside crucifixions, and frosted pine branches had been placed at the bleeding feet of the Christs like offerings to a pagan forest god. It was so cold that after walking half an hour my beard and moustache had frozen into knotted clumps of ice, and the water in my bottle was a solid undrinkable block.

The Alps, I knew, lay somewhere to my right, but for the past three days they’d been hidden behind a white murk. I was starting to think I might never see them, but just as my mind formed that thought, I looked round and there they were. It seemed amazing that things so huge could have appeared silently, and even more amazing that I’d been walking in their shadow all week without being aware of that massive presence. Over the course of the next two days they seemed to merge in and out of existence, sharpening into perfect focus and suddenly disappearing again, as if trying to make up their minds whether or not to establish themselves in solid form. It was like some kind of vanished kingdom, taking and losing shape before my eyes.

I noticed that the people I met who live in or near these mountains have a habit of talking about them in almost human terms. They imbue them with moods and personalities. ‘Sometimes we feel that the mountains decide to go away somewhere else for a day, as if they have a secret meeting place,’ said the couple I stayed with in Traunstein. And I found myself thinking similar thoughts during the day I spent in Salzburg, where the mountains seem to crowd around the city at different times of day, as if trying to nuzzle their way in.

At this temperature, there is no soft ground. Tarmac has become my friend again – hard and flat being preferable to hard and bumpy. Ploughed fields and frozen molehills are particular perils for the ankles. My body has to work twice as hard crossing open stretches of snow. Step-sink, step-sink, the schoosh schoosh sound of dry powder, a new rhythm to walk to. Trying to avoid a major highway, I took a shortcut through a steep valley where the snow was surfaced with a frozen crust that collapsed when I took too heavy a step, sinking me knee-deep. I could only proceed with tiny bird-steps, concentrating on keeping my body as light as it could possibly be, but whenever my mind began to wander – even starting to hum an old tune – I would crash back through the crust. The task seemed impossible. I was hardly moving at all. Exhausted, I threw myself down in the snow to gnaw at my half-frozen sandwich and drink the last of my mostly-cold coffee. Sometimes giving up is the best strategy – suddenly, out of nowhere, appeared two riders on horses as hairy as dogs. I leapt up from my snow-hole, brushing the crumbs out of my ice-beard, gesticulating at them like some sort of desperate goblin. I asked for directions, and I think that if they had raised their eyebrows or expressed any surprise at that point I might have despaired entirely – but the purple-faced man in the fur hat merely pointed me on my way as if I was doing nothing particularly unusual. Perhaps because Austria is a country of wintery, outdoorsy people, where the mountains are never far away and activities such as mine are not as rare as they might be elsewhere.

From Frankenburg to Ried I walked through a region of deep forest, again going cross country to avoid a highway. I entered the woods up a track of pure ice – a stream must flow down here in the summer – and once the track and the ice had ended, no paths lay ahead. It was the first time on my journey – and I’ve been going for two months now – that I was walking without the benefit of a road, pavement, footpath, cycle-path, railway-path, hiking trail, track, dike, canal, river, stream, embankment, verge or the border of a field to keep me going straight. There was nothing but rocks and trees, jumbled and disordered.

Trackless forests are not easy going. It’s extremely difficult to walk in a straight line – your eyes invent tempting trails to follow, which lead you in all kinds of wrong directions, and your legs automatically take you along the contours that suit them best, no matter how dogmatically your brain tries to keep them straight. I lost my orientation quickly. Everything looked the same.

A very different set of emotions took over in these woods. I felt a deep, fierce thrill to be in the wilderness at last, away from anything remotely human, but there was also an undercurrent of fear at the prospect of genuine aloneness. There was nothing and no-one to help me – all I could do was keep on going, and try to get out before dark.

After a couple of hours the trees thinned. Ahead was a clearing and telephone poles, half a dozen farmhouses scattered down a white hillside. I felt immediate relief at the sight of habitation – ‘there are people there who speak a language!’ – but also, with equal force, regret and disappointment. Suddenly the adventure had ended. Now I couldn’t go wrong if I tried. The whole forest walk felt short-lived, its wildness just an illusion – it seemed totally absurd that I’d felt anything remotely like fear, with civilisation just over the next rise.

Most of our adventures, perhaps, are like this. Flirting with the wilderness but knowing you can’t be part of it. Wanting to lose yourself inside it like you lost yourself in childhood stories, in imaginary realms – yet always fearing to go too far in, so far you might not get back.

But walking, I think, brings adventure closer. And in this winter, walking alone through a snow-covered landscape still seems like the greatest happiness I could know.