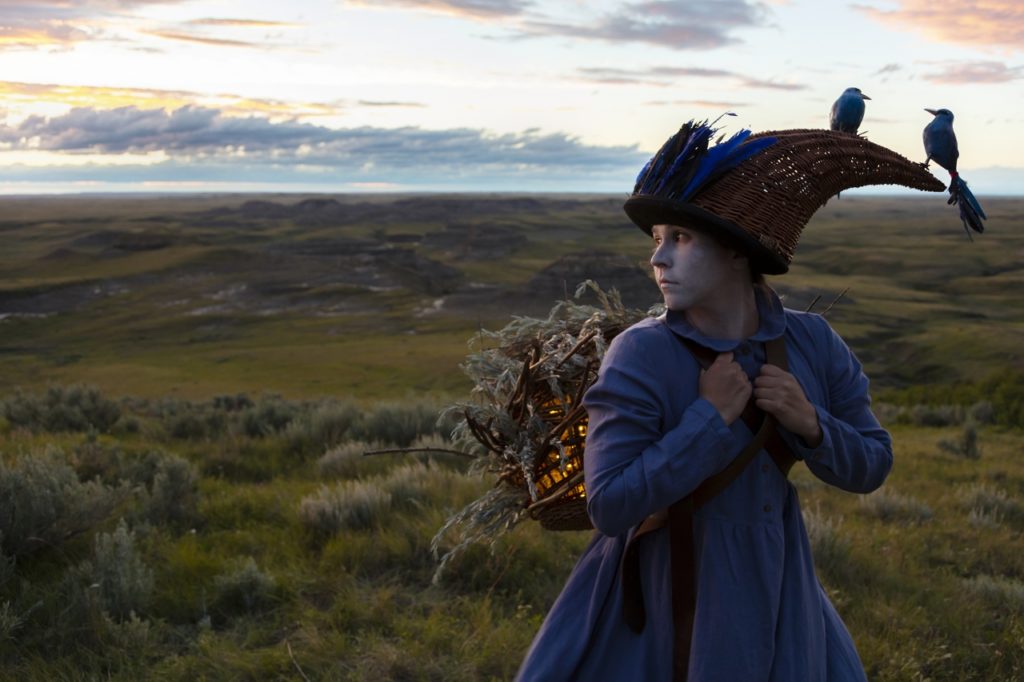 On the mountain there is a refuge. You stumble upon it on a dark stormy night, when you feel you have lost your way. The door is unlocked, the room is bare but inviting: a table, a bed, a lamp, firewood. It is a space where others have been before you and will come when you have gone. Here you stop, catch your breath and find your bearings. In this rough crucible, as the wind howls outside, you write and sketch, dream and weep. In the morning there comes calm. You are still heading down the hill, but your head is clear and you no longer feel alone.

For ten years the Dark Mountain Project has been a refuge, a lookout point on a precipitous journey of descent. Its territory has always been singular. As much a soberness of mood, a position to take, or a frame of reference, it has created a platform where we can acknowledge that, even as mainstream culture still aspires upward, it is ‘time to look down’. From the publication of the manifesto, across 16 books, five festivals, hundreds of online articles and artistic collaborations, the project has provided a space within which to pause, against a twilit backdrop of environmental and social breakdown, and step outside the bubble of civilisation. This space has acted as a gathering point where we can consider the destiny of human and more-than-human collectives – and the planet itself – in the face of decline and ecocide. 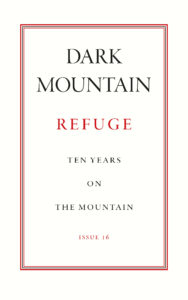 The hardback books have always been at the centre of what we do, the project’s heartbeat and rhythm. Navigating a territory beyond progress, they log the testimonies of writers and artists confronting the existential and experiential questions about our predicament, in all their beauty, joy and terror. The issue you hold in your hands is a threshold publication. It contains 56 responses to an invitation sent to some of our most seasoned ‘mountaineers’ – fellow travellers who have walked alongside the project at different twists and turns on its journey, some for the long-haul, some for a brief spell. We invited everyone to reflect on the undercurrents of the last ten years, from the big picture to the microscopic, and then to look at what lies ahead. It marks a pivotal moment, not only in our existence as a project, but also the closing of a tumultuous decade, a decade which has made the refuge provided by Dark Mountain seem more crucial than ever.

When we see that collapse is coming – or is already underway – it is tempting to look for the precise moment when difficulties began, the fork where an erroneous path was taken. Was it industrialisation? No, it was farming. Was it capitalist individualism? No, it was patriarchy. And around we go… Dark Mountain’s focus has been to attend to the stories and myths that underpin our human-centric worldview, to ask how our civilisation’s ecocidal narrative web has got us into this fatal muddle. Which stories were told that placed us outside and above nature? Which ones detached us from place and its other inhabitants? Which myths took us out of cyclical time and into a continuous line of progress which allows us to think we can search for wrong turnings at all? And which stories might speak to us in an age of endings?

Surprisingly perhaps, for a book that looks back at these turbulent years, there is almost no reference to the chatterings of media headlines or online outrage. You will find little discussion of the demagogues of the age, certainly no mention of Twitter, fake news or the latest iPhone. When you are in that refuge – offline, offgrid – what concerns you is not the latest political scandal, but how resilient you are in ways that are rarely discussed: in your heart and soul. The question you most consider, as the tempest builds and the creatures disappear, is how can you connect with the Earth that sustains every breath you take? How can you connect with the ancestral knowledge that once instructed us in how to live in beauty and harmony here?

For some in these pages, the wind-rocked bothy is on a literal mountain, Beinn a’ Bhric above Rannoch Moor, where Dougie Strang clears the Cailleach’s well on the first of May. Or it is a tent in the Bay of Biscay as Catrina Davies ends an epic cycle across Spain, or travelling in a car down a long stretch of Colorado highway in Rob Carney’s dystopian ballad. For others, that still point is a state of awakeness in a time of amnesia; the moment of realisation, as Jay Griffiths glides above a dying coral reef in the Indian Ocean, or Anthea Lawson finds herself in a police cell in Wembley, or the narrator in Eric Robertson’s story watches as a ‘poor dumb bastard’ walks towards his death in a feral pasture in Utah.

Our art has always been marked by the dramaturgical, by work that is found or enacted in the cities and in the woods: women put on costumes that reveal their mythic roles, men shed their clothes and immerse themselves in lakewater and snow. After a decade of distance-walking across Europe, Monique Besten heads home dispersing cosmos seeds along the highway; after a decade wearing his father’s 60’s suit crawling down Broadway, or curled up in holes dug by hand in deserts and clifftops, Robert Leaver ends up face down in a quarry in the Adirondack mountains. How did they get there? We follow their tracks.

What connects this great shoal of stories, paintings, photographs, poems, interviews and essays, is the search for a lexicon that explores the existential crisis we share

Among all the themes in this book, what connects this great shoal of stories, paintings, photographs, poems, interviews and essays, is the search for a lexicon that not only explores the existential crisis we share, but that might also break us out of a mindset that distorts our perception and keeps us in cultural lockdown. An uncivilised language of body, spirit and imagination, which requires a decolonising of our own Empire vocabulary and the finding of a deeper story about being human. ‘How can you possibly tell the story of the world that isn’t human?’ asks Paul Kingsnorth in conversation with Charlotte Du Cann. ‘How do you build a culture which sees the world as a living, sacred community of which you are part?’

Around these pages twines an alphabet of leaves and honeysuckle branches, seabird and river; essays on the elemental and ancestral tellings held in autumn haiku and Arctic string figures. Martin Shaw, writing about the myth-charged wilderness quests he guides, describes the challenges of returning to the village to speak of what has been learned, without words, in the forest. We are so transfixed by the sound of our own voices, Margaret Elphinstone observes, we have become deaf to the voices of creatures and trees. Listen, says the Hare to Deadman in the poem. Open your ears.

At Dark Mountain’s 10th anniversary celebration by the river Thames this summer, someone asked us: ‘Where will the project be taken from here?’ ‘Nowhere,’ we replied. Because, after a decade on the mountain, here is where we intend to stay. Our door will remain unlocked, even as the storm increases.

At this threshold, we’d like to thank everyone who has made this creative project happen: all the editors, writers, artists, administrators, collaborators, subscribers and readers. Everyone who has sat around the campfire with us and taken part in our events and publications. Many thanks and fair winds to our co-founders, Paul Kingsnorth and Dougald Hine, who have both now left to venture elsewhere. And many thanks to everyone who has contributed to this anniversary issue and especially to Christian Brett, our typesetter at Bracketpress, who has designed every book we have produced and who created this book’s cover.

See you on the mountain.

COVER: Lead Me to Places I Could Never Find on My Own I (from the series ‘As Immense as the Sky’) by Meryl McMaster
Digital C-print

Contemplating time and the countless cycles of life that have recurred around the ancient mistassini (monoliths), sputinas (buttes), wiyacahk (canyons) and ayeakow awacha (dunes) of Turtle Island led to the development of ‘As Immense as the Sky’. These thoughts left me in a state of wonderment, but also stirred within me a fearful apprehension of our permanent and collective impact upon our
beautiful world. (Courtesy of The Baldwin Gallery)

Artist Meryl McMaster explores identity through hybrid inheritances –Indigenous Canadian and European/female – with the body animated by the natural world. Her first UK solo exhibition will open at the Ikon, Birmingham in December 2019, followed by an exhibition at Canada House, London. McMaster is currently represented by The Baldwin Gallery, London.

Now booking for our book launch at the Poetry in Aldeburgh Festival on 9th November, 7-8pm. Hope to see you there!