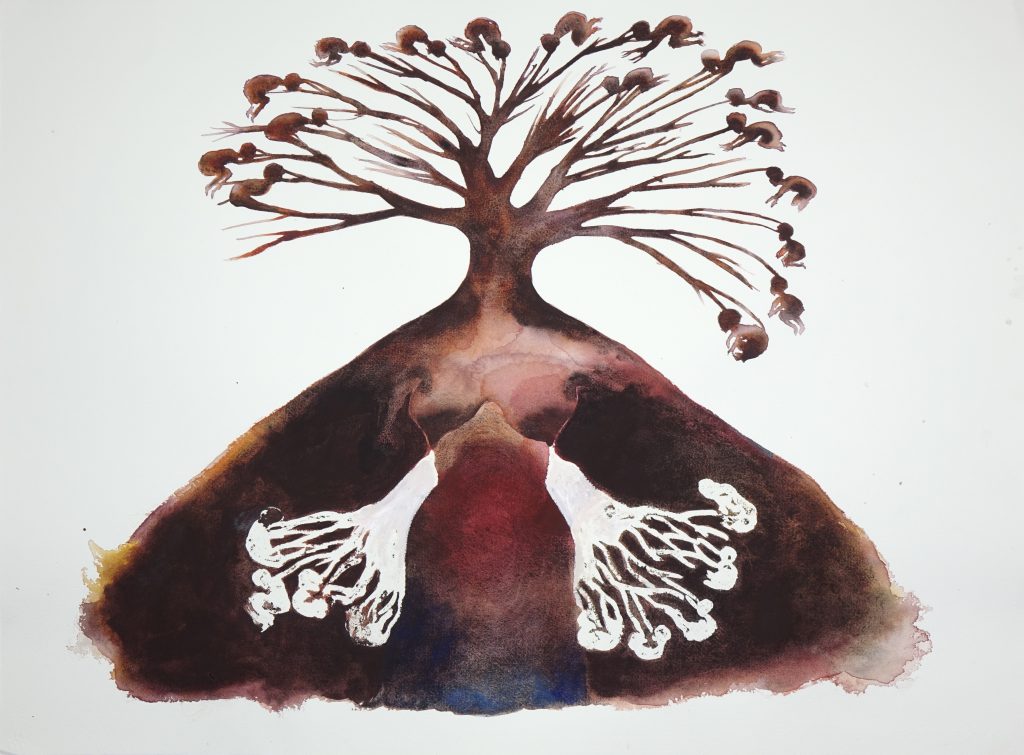 Mother Mountain by Kate Walters (from Iissue 17)
Laura B. Fox
lives in rural Washington State with her husband and any number of dogs, cats, goats, chickens, and ducks. Her fiction has been published under various pen names in different places. She studied social ecology at Prescott College in Arizona and stayed for a few years at Arcosanti, a community housed in an architectural experiment.
Share
Three and a half years ago, I took a limping old van to the Ozarks, where I sat naked sobbing in a sparkling creek next to a man named Marvin, also naked except for the bandanna he had twisted and wrapped around his wild curls. He had just finished telling me about the children he would have someday. Their lives would be enchanted with all the mystery and magic of the natural world. They would be given nothing but encouragement and room to grow. Marvin had his eye fixed on something I couldn’t yet see, it gave him a confidence that made him irresistible at that point in my life, when I wasn’t sure of anything.

My van, my only possession, was breaking down and my future was just as murky as my past was senseless. I had already latched onto Marvin, too quickly, by the time he started to tell me about his dream children, unintentionally picking the scab off of an old wound that I thought had healed already.

Most of the time I’m horrified at the idea of having children. I was once married to a happy-go-lucky person who, after his father’s death, said he wanted to make more of himself. His belief in magic and miracles was persuasive enough that I tried to make this ordinary, amazing thing happen for him. We threw ourselves into positive thinking, drank lots of superfood smoothies, and tried like mad, even after a fertility doctor laughed us out of her office.

I wasn’t about to go through all that again with Marvin. Some other woman – someone younger, healthier, more optimistic –  would complete his dreams.

I told him I couldn’t have children, then surprised myself by bursting into tears, and then I couldn’t stop sobbing. In my mind I was already patching the van’s exhaust system back together and saying goodbye, I would forget him at the next communal farm or casino or whatever, but Marvin was cupping my face in his hands and saying, ‘You will have children. I know it.’

Marvin told vivid stories about his Sasquatch neighbours, masters of the invisible life. He called them the Forest People.

As that Ozark summer peaked and waned, ticks, chiggers, and oak mites swarmed. Marvin continued to tell me about his perfect children and the perfect life they would have. They would live in the forest, in simple shelters made of all-natural materials, and they would wear clothing made of woven plant fibers. He taught me how to make cordage out of yucca. His kids would never be exposed to the products of industrialised life – no plastic, chemicals, metal, or glass. He explained this to me while I watched him add fabric softener at the laundromat, and I wondered how and when he would make such a radical transition. He was already 53 and readily admitted that it would take more time to develop his skills.

Marvin told vivid stories about his Sasquatch neighbours, masters of the invisible life. He called them the Forest People. I liked to imagine his cabin was surrounded by unseen well-wishers who occasionally left subtle hints, so that we could read meaning into the leaves that dropped into our rainwater buckets. Marvin never spoke above a whisper because loud voices were offensive to the Forest People.

I wondered, wouldn’t they be bothered by crying and fussing babies?

Marvin said that his children would never cry. No, not even at birth.

Most human suffering, he whispered in his Midwest preacher accent, has to do with the way we are conceived, in lust. If two people can manage to conceive a child without any lust, only with pure intentions for bringing a child into the world, that child will never cry. Done right, the parents won’t even remember the physical act.

Marvin’s children, conceived in this pure way and raised in a purely natural environment, would grow up to be the saviors of the planet. He wept over the polluted lakes, the lost birds he’d known in his own childhood, and the ecological imbalance that caused the bug bites on our ankles. He didn’t know how to fix it all, but his children would.

Marvin fed out his vision bit by bit. For a while I thought I could point out the holes in his ideas and talk him out of them, convince him to live in the world that exists. But by the time he started telling me about the mother’s very important role in humanity’s second chance, I knew I would have to leave.

Most human suffering, he whispered in his Midwest preacher accent, has to do with the way we are conceived, in lust.

For Marvin, this vision wasn’t just a passing fantasy or a game of make-believe. He had lived a normal life before, marriage, business, church, had gone through some kind of breakdown – or awakening as he called it, and this was who he was now. He said that he hadn’t been a very nice person in his former life. He had been angry. Aggressive in business. Never home for his wife. He was better now.

The leaves turned and the air started to bite. I found a buyer for my van and got a bus ticket with a destination several states away before telling Marvin that I was definitely not going to bear his children.

Looking directly into my eyes he said, a little too loudly, ‘Then, why are you here?’ His gaze drifted upward and his voice broke when he said, ‘Why is she here?’

The Forest Peoples’ answer came that I needed to keep learning the skills. How to live as one with the forest. I made flour from acorns and learned to cook on heated rocks over small fires that I made with twigs while waiting for the date and time printed on my bus ticket. I wanted to build an earth shelter but Marvin said I wasn’t ready.

With Marvin’s instructions playing in my mind’s ear, I built a sweet little earth shelter on a piece of land that nobody cared about, part-way up a mountain on the Olympic Peninsula. I practiced my Forest People skills for a month before meth addicts found my camp and I had to leave.

It’s been three years since that summer with Marvin. I’m married again and I’ve adopted a large dog who doesn’t travel. I think this is as stable as it gets. I do still hear from him every so often. His last email told me that his son had been born, deep in the woods somewhere in the Ozarks. The shelter he made for the mother and child out of saplings and leaves is not as windproof or watertight as he had hoped it would be but the mother, a true believer, refuses to bring the baby into the old Quonset hut where Marvin sleeps.

I forwarded the email to Missouri Child Protective Services, but the little family in the woods is not likely to be found. They wouldn’t have registered the birth of this non-savior, innocent, attended by silent Sasquatch instead of angels. I hope his parents comfort him when he cries. 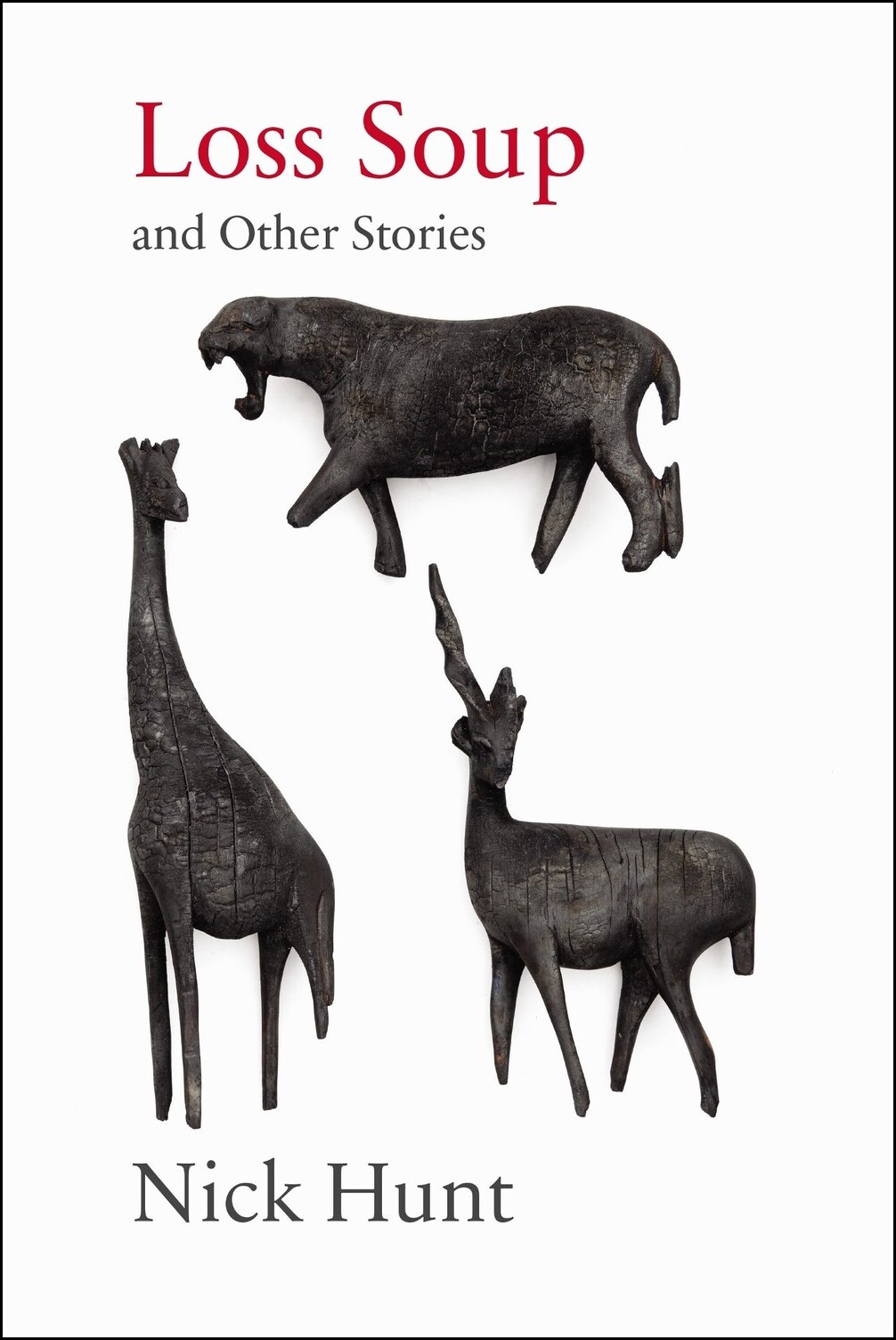 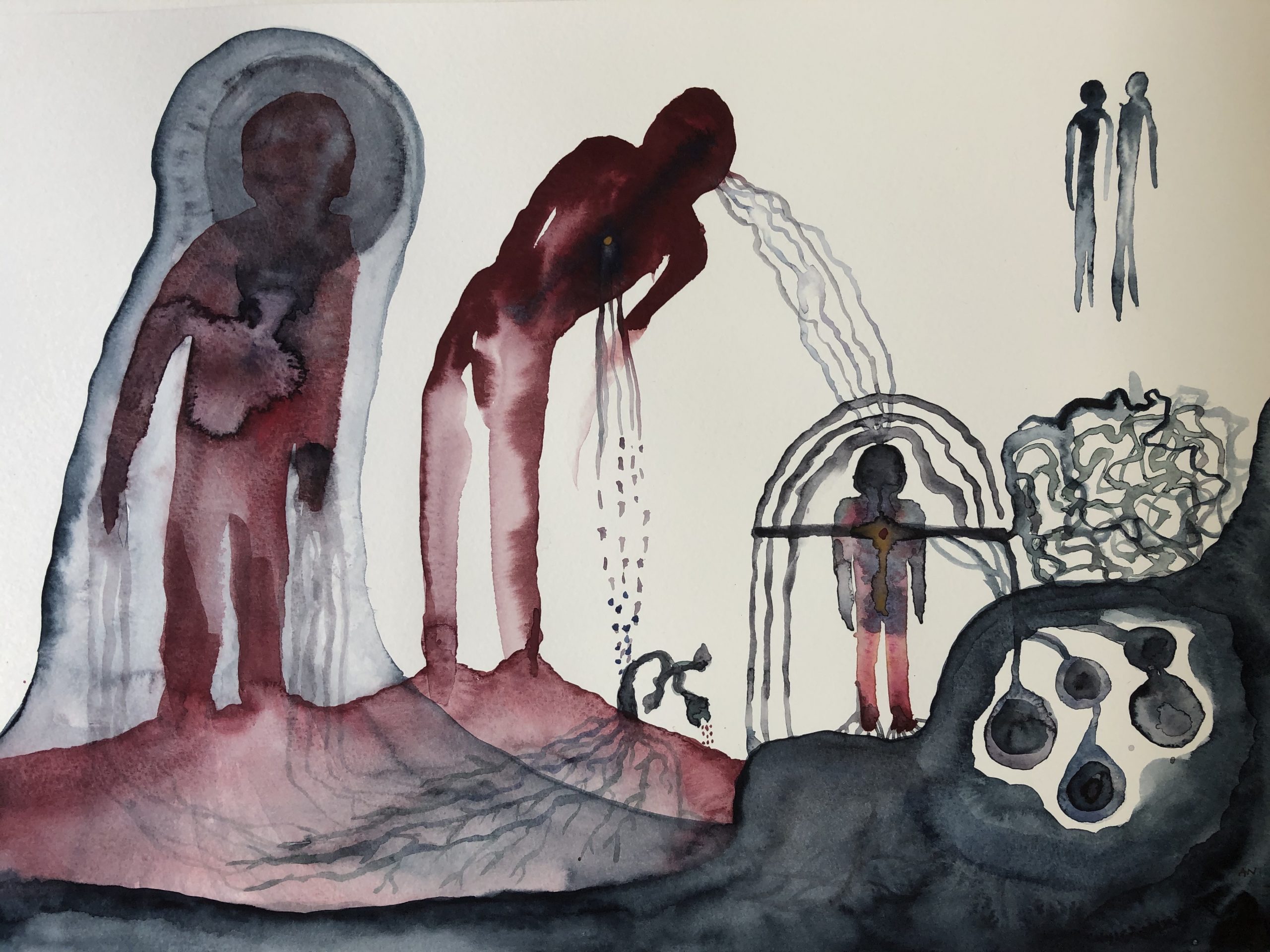 Philip Webb Gregg
Today's post from our new issue: Philip Webb Gregg recounts a disturbing tale of devouring and disappearance. With artwork by Anika Nixdorf.
From Our BooksIssue 20 – ABYSS 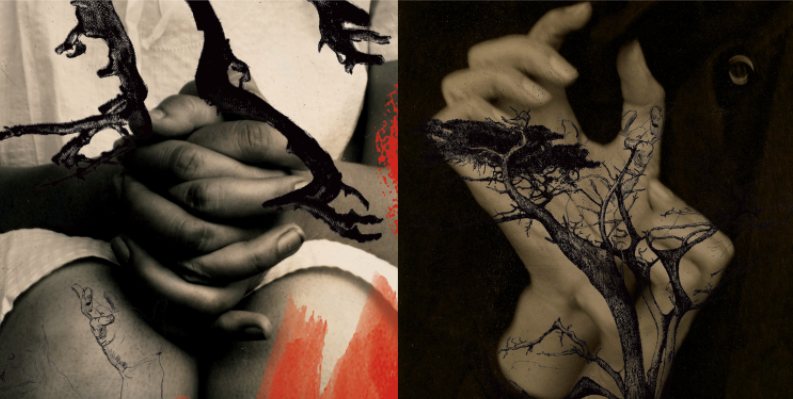 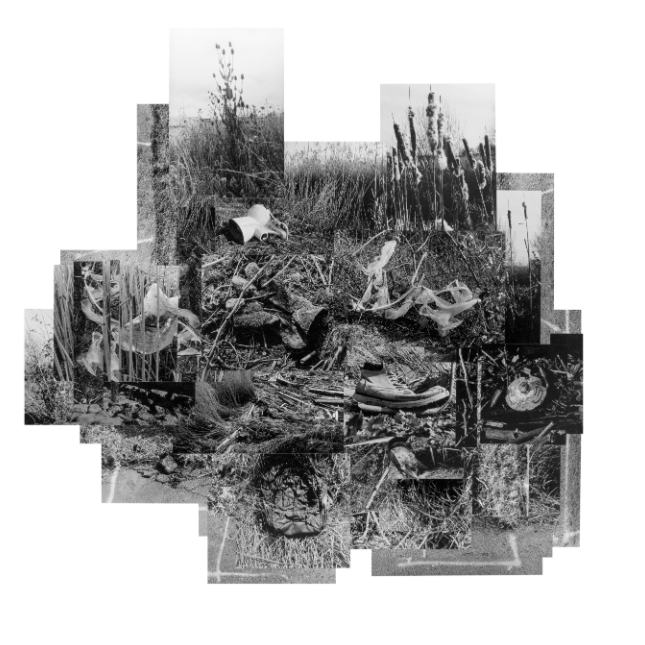 Micheál Mac Gearailt
Our third offering from Dark Mountain: Issue 18 – FABULA comes from the bogs of a dystopian Ireland, with artwork by Sarah Ainslie
Issue 18 – FABULA