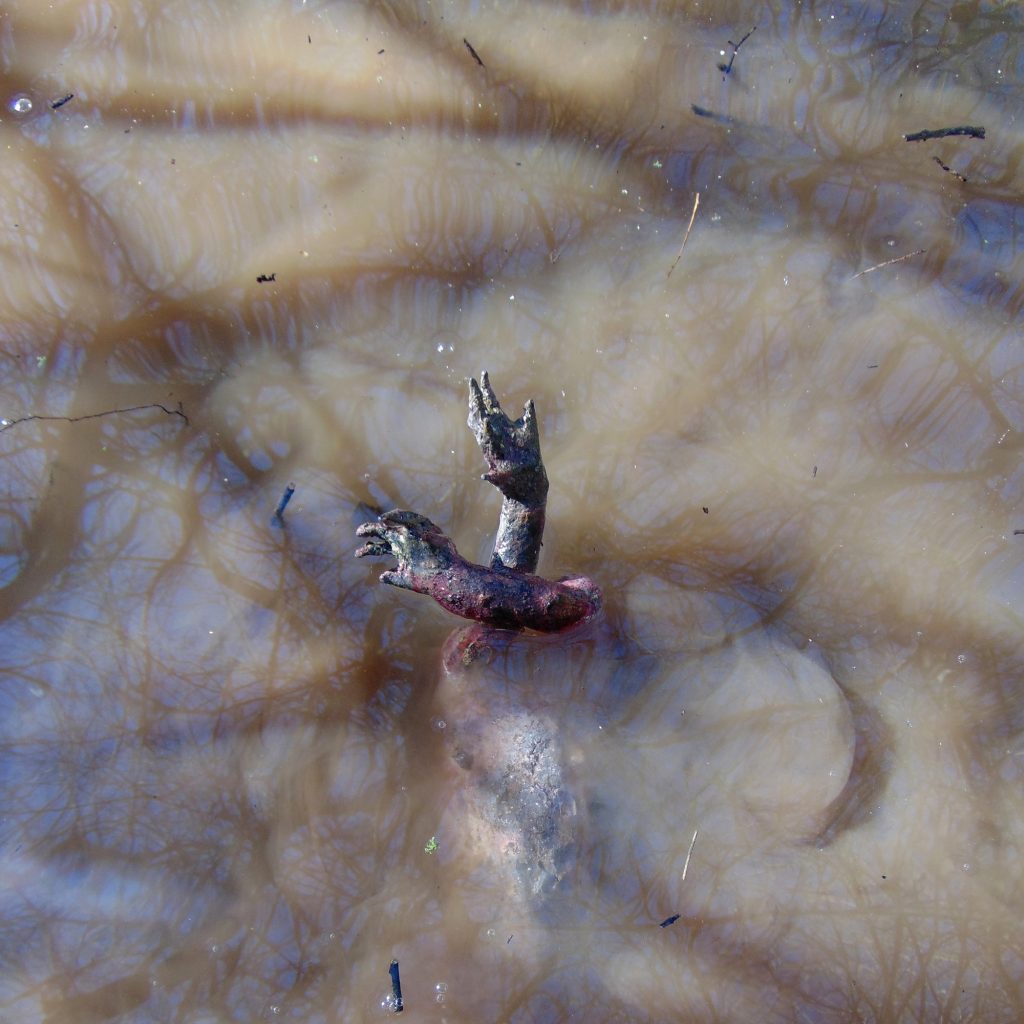 The Ancient. Sculpture by Jim Carter (from Dark Mountain Issue 20 - ABYSS)
Michael J. DeLuca
was once caretaker of a farmhouse in the Berkshires; now he lives among post-industrial woodlands north of Detroit. He's the publisher of Reckoning, a journal of creative writing on environmental justice. His novella Night Roll was a finalist for the Crawford award. A novel, The Jaguar Mask, is forthcoming in 2024 from Stelliform Press.
Share
It came down the hill behind my house, along the stone-lined stream course at first, then rising through the brown tangle: a secret flood, camouflaged by dead grass until I trod up past the apple tree and through the old pasture to hear the slap and squish instead of swish and rustle and feel the suction as it tried to take my boot.

I could have dug the course deeper, pulled out the wrack of seasons gone since anyone had farmed my hillside, but it was only me now on these acres, only me in the house. Even alone, forced to make my own distractions, I hadn’t thought of it. Who expects meltwater?

Waterbury, the neighbour, could have warned me. He stopped by only after the runoff started to erode my driveway, then the dirt road that led to it, and to his. An alluvial fan of gravel and grey sand spread from the mailbox, fernlike, brightening to mica-silver as the water dug past it into the road. Get drunk enough, a woman’s steepled fingers might look something like that fan. For me, it was the opposite.

Things pile up, things rot, something gives, one year to the next. Never know what’s happening up the hills.

‘House right in its path,’ said Waterbury. ‘Any damp in the cellar? Original foundation, got to keep a weather eye.’

‘What did the last owners do?’

His shrug caused the hound at the end of the leash to lay off snuffling my palm. ‘Long time since we had this kind of winter. Things pile up, things rot, something gives, one year to the next. Never know what’s happening up the hills.’

It flooded the basement. The house was old, older than old, new to me. I hadn’t been to the basement much, not all winter: cold, dirt floor, no wiring, wooden box built in the darkest corner where they used to store food. Mildew lines on the walls, hadn’t noticed those. High water marks. ‘Lucky,’ said Waterbury’s wife, ‘that old apple tree’s roots played nice.’ I liked his wife. She was direct.

I bought a pump, ran a cord from upstairs, hose outside, left it on for a night, chugging.

I lay in bed looking at the sagging ceiling trying to feel like I’d done something.

The water shorted the electric pump. I bought a gas one. That one flooded. Waterbury: ‘Can’t pump if it can’t get air.’ I broke up the box and built a platform to raise the pumps where they could work. I ran them both at once, sat on the stairs and nursed them, eating wrinkly apples somebody last fall told me to save: mealy, sweet. When they pumped down the flood I could lower the platform. A melt, it’s finite. Can’t last forever.

I kept having to nail longer legs on, having to move to a higher step. My cuffs got wet. My feet were red, then pale. The bulkhead went. Noise scared me, like thunder. Guess it was rotted. By then I was on the top stair.

I went out to see how it looked. The hillside shimmered, grey clouds reflected from under the grass. My car’s tyres had sunk into the driveway. Or I guess the driveway fled from underneath, on down the road. I hadn’t used it much except to buy groceries. And pumps.

He shrugged the hound back from my crotch. ‘Maybe a boat,’ he said.

The apple tree’s roots were half exposed. More than half, I guess. We watched it topple over and ride past.

What could I do?

I went with it.

I’d let my hair get long. Grey. It spread around me. Floating past the mailbox, under the water I could see that alluvial hand.

Down the road, past fields, through pinewoods, green signs told how far I’d come. Didn’t see another person ’til it took us into town. They stood on rooftops; they hung from lamps. They were small, these hill towns: why I chose them. I’d come away. Now, thanks to this flood, I’d go back.

The tree, my apple tree, turned slowly, end over end when we came to a waterfall. High-tension wires crossed above the flood.

The hilltops. Something had happened there, this thaw’s catalyst.

Near the city, I saw her, Grammy, sitting in the green armchair with the needlepoint millhouse scene she’d done before I was born, the water at her breast. ‘Howayou, dear?’ she said, that way she had, like those words, the one word, was inscribed on the inside of her head along with love and recipes, and the rest of her had fled, eroded. I hadn’t seen her in –

You run out of things to say.

The melt took us under trestles, between towers. I saw Grandpa, who was dead. My cousin Ken, greyer than I was, waterlogged, weeds plastered to his chest.

As the navy yards loomed up, the drydocks, I thought of my hillside, the house with its solitude. The hilltops. Something had happened there, this thaw’s catalyst.

A bird lit in the apple tree, in the roots not the branches, a sparrow cloaked in city soot, whirring. We couldn’t see the harbour yet, but it was coming. The bay. There would be gulls. It would be big, the land’s arms encircling, the little islands with their old battlements never used, the brick ruins and bad memories waiting to be subsumed.

The image depicts the final moment of a cycle of begins with the extraction of raw materials such as bone, animal remains and soil from the land. What appear on the surface to be compulsion to take and disturb the remains of organic life in order to fulfil a creative impulse is, however, the beginning of a re-sanctifying process. The taken materials are reconfigures into a new form to express complex feelings of loss, death, time, remembrance and renewal. In this particular image, calls for an end to transgression and plunder are symbolised by the ‘X’ and the crossed arms. Ultimately, what is plundered is returned to the land, the original materials transfigured in new light and meaning. (from Issue 20 – ABYSS)