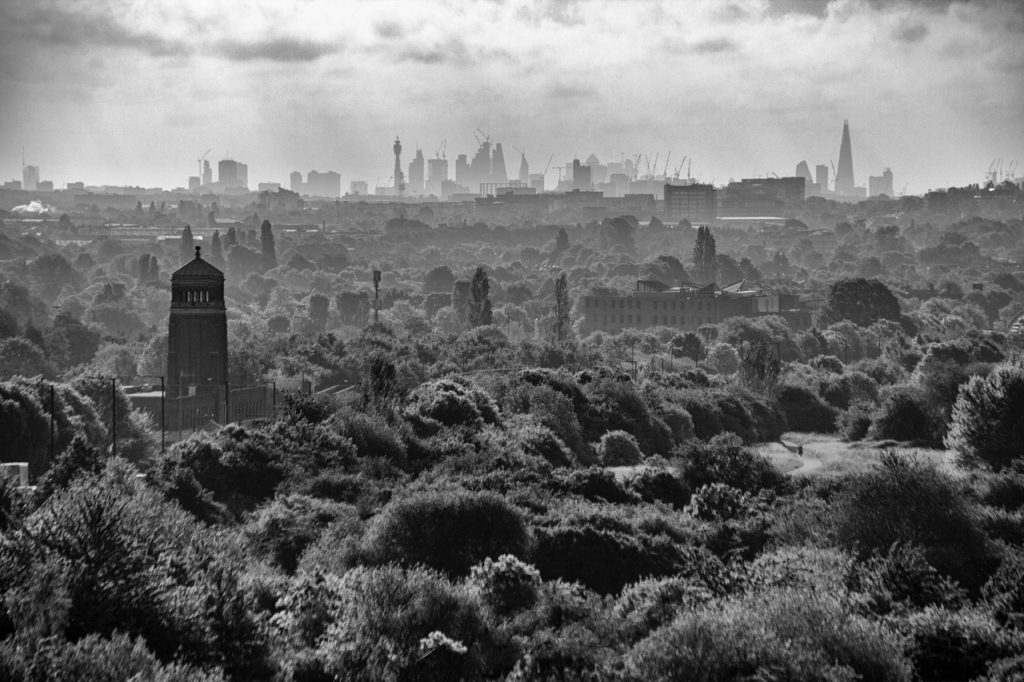 'Jack in the Green' by Colin Bushell
Mary Paterson
is a writer and artist who works across visual art, text and performance. With Maddy Costa and Diana Damian Martin she runs Something Other, a collaborative project that supports experimental writing, thinking and politics.
Share
It is 2018. I fly to Austria and stare at the horizon.

And before that? ‘That’s where my grandmother was from,’ I say, enthralled by the greenery. She left, I imply, because of the communists. But she didn’t. She left because of the fascists, because she was a Jew. Thick, rugged conifers mark the boundary between here and there, like the background to a fairy story. The stories of her escape are thick and hazy, too; spoken by wine-loose tongues at family gatherings. My family, miming British traditions with the gusto of those with something to fear.

I have nothing to fear. Austria is a beautiful country, but I am only visiting for one day. Tomorrow morning I will take two trains, two trams, a bus and an aeroplane to arrive safely at my home in south-east London in time for the afternoon school run. ‘She was smuggled down the Danube’ is one of the stories told about my grandmother, who died when I was not much older than my son is now. Sometimes I trace the line of her river on the map on his wall. The Danube travels south-east through ten countries; how it helped my grandmother escape to London, I do not know.

‘In Britain,’ says my host in Linz, amiably, ‘everyone wants to show you how old things are. But in Austria, we are always proud of what’s new.’ We laugh. It’s an uncomfortable laugh, haunted by the theme of empire. Each of our countries is reluctant to look in one direction.

He draws a line in the air to mimic the line of the Danube river. ‘It was once the edge of the Roman Empire, too,’ he says. The end of civilisation. They called outsiders barbarians because they couldn’t understand what they said. To Roman ears, everything else was just ‘bar, bar, bar’. After sunset, I walk up to the banks and there it is, beneath a stone bridge: wide and deep and dark. The water makes a loud noise, like a thousand breaths pumped in and out of a thousand bodies. It tells me nothing. The weather is warm and Europeans are eating ice creams in the dying light. I have nothing to fear.

When my grandmother was dying, we used to visit the nursing home and were instructed to Never Turn Around. My brother and I folded our bodies at the end of the bed and stared at the floor. Garish pink and yellow flowers stared back at us from the carpet. ‘I don’t want you to remember her like this,’ said my mother. I don’t remember her at all.

I try to talk about my grandmother but all I have are stories.

The past is a different country. I know this because I can slide from the coast of France to the coast of England and arrive before my train has left the station. The time difference between mainland Europe and the UK means the Eurostar sails soundlessly beneath the English Channel and through the London suburbs seven minutes before it departs from Calais.

Imagine saying, ‘I have nothing to fear.’ 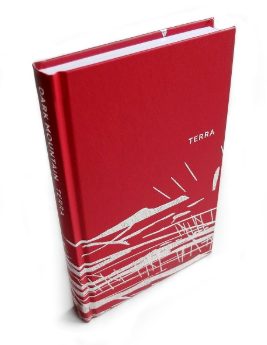 It is 2015. I am standing on the medieval battlements that line the French coastal town of Calais, when I see a boat vanish before my eyes. I’m so used to undersea travel, that I’d forgotten that ferries still make this journey – 27 miles across the water to the English coast. Before the construction of the Channel Tunnel, this was the start of every trip to Europe: the continental air whipping our skin as my brother and I stood on deck, facing backwards.

‘In Britain everyone says “Europe” as though you are not really part of it,’ says a dinner guest in Linz. ‘Of course,’ he adds, laughing, ‘you are not part of it anymore.’

The boat is as vast as a tower block. It sighs its heavy horn into the fog. I look down to write some notes and when I look up, the boat has gone. Disappeared, into thick air. In the same pocket of time, two boys have arrived next to me. We gaze, for a moment, at the astonishing horizon. They speak to me in English and, as we walk back into town, shopkeepers spit at their feet. From this, I can tell the boys are migrants: young men from North Africa or the Middle East, waiting for a chance to cross to the UK.

Another story is, ‘She found her sister in Paris, after the war.’ How a Jewish woman survived in Nazi-occupied France, I do not know. My mother says that her mother bumped into her sister while they were on holiday. The story, she says with her lips pursed tight at the end of each sentence, is not open for questions. The sisters did not stay in touch.

It is 2015, and the British government has targets to reduce immigration. Thousands of people are gathered on the French coast, speaking English, like a colonial dream turned sour. The British prime minister calls the migrants a ‘swarm’. The British newspapers call them far worse. Next year, the bulldozers will come for the shanty town the migrants have built. They will evict over 7,000 people in order to raze it to the ground.

Their bodies lie prone outside the Museum of Memories in Calais: dozens of migrants with dark skin, long limbs, crushing the flower beds and disturbing the clipped edges of the lawns. The museum resides in a disused World War Two bunker: a collection of objects, thick and hazy, from the Nazi occupation. There is an entire room of knives, of the kind carried by fearful citizens. Another room of letters from members of the French Resistance, writing from concentration camps when they knew they were going to die. The museum smells of damp and worry. It feels like a traumatised mind. Faceless mannequins wearing Nazi uniforms might leap out from behind their Perspex jails.

The entrance to the museum is narrow, and visitors queue to get in or out. Our feet brush the bodies of dark-skinned boys as we prepare to honour the sombre lessons of our past. We look the other way, so we don’t remember the bodies at all.

Another story is, ‘She wrote in perfect English. She always chose to communicate by post.’ Her accent, this implies, was suspect. Her writing was not really a choice.

Imagine being scared of your own words.

I have lived in this city all my life, and so its streets are also my memories. Privately, I rename each landmark as a page in my personal archive. Westminster Bridge and the Unsuitable Boyfriend. Parliament Hill and the Big Idea. Sometimes I fear my memories are going to vanish, overwritten by bold lines scored from above. New skyscrapers block the view down the river. New tower blocks turn their gaze to the sky. New developments cast old pavements into permanent shadow.

I live near a place named Elephant and Castle, which people like to say is derived from ‘Infanta de Castilla’. The story is that locals commemorated the visit of a Spanish princess in the 1500s, and the words got twisted over time. Actually, the name has a more practical origin. The elephant and castle is a symbol of religious war, which was given to an inn, which used to stand on this site. The inn was next to a blacksmith’s yard that manufactured weapons. At that time men were illiterate and technologies were forged from fire and steel, so drinking holes were the best way to navigate.

Another story is, ‘She called herself Mary when she got to England.’ At the time, Mary was the name of the British queen. What her name was before she travelled across the water, I do not know.

In Switzerland they raise a balloon before they construct a tall building, so the locals can imagine how high it will be. In London they raise the cranes overnight and evict the locals to another city. Elephant and Castle is being named again. The developers call it Elephant Park. They write it on hoardings that advertise units being sold on the promise of a £25k annual rental return. They cast it in steel next to the clipped green lawn. They bought the land from the council; together, Southwark Council and Lendlease plc evicted over 3,000 people in order to raise Elephant Park from the ground.

The story is, I’m called Mary, so I have nothing to fear.

Former residents were moved 27 miles away, beyond the borders of the city. In 2013 the council dragged out the final resident, a teacher, by force. In 2014 the developers sold the first apartments, off-plan, to investors in Singapore. It was not until two and a half years later that units were made available in the UK.

Is this something to fear?

One day an alarm goes off.

It goes off for days. Dogs cower at the end of the road. People tut in cafes. ‘It’s the Arabs,’ says the shopkeeper who lives below the noise. ‘It’s the Russians,’ says the waiter at the falafel place next door. The alarmed flat is owned, they whisper, by foreign investors who don’t care about the noise on the street.

It is 2016. After dark, London’s newest skyscraper writes itself into the city’s horizon, its mean living rooms illuminated against the dying light. This skyscraper is called Castilla and it lies at the centre of the rebranded Elephant Park. Castilla, it implies, holds the scent of the exotic and the rich, like a Spanish infanta. Like a Spanish infanta, language twisted into misuse.

Castilla. Elephant Park. I roll the new words across my tongue and try to swallow.

The story is, I was named after my grandmother. Sometimes all of this is true, as long as you’re looking in the right direction.

In a way, everyone is right. The entire parade of shops, and all the flats above them, are owned by a single company, trading offshore. The alarmed flat lies empty. It will take a week for anyone to arrive with the key. After a while, the noise stops sounding so alarming. It fades into the landscape of our lives or we learn not to listen; ‘bar, bar, bar,’ it sings, ‘bar, bar, bar.’ We hear it echo at the edge of the world.

Image: Jack in the Green by Colin Bushell
London from Northala Fields

Contrary to Benjamin Franklin’s famous maxim the only real certainty in theuniverse is the persistence of life. As Jethro Tull sang in 1978, Jack in the Green persistently weaves herself through the cracks in the pavements, the motorways and concrete that we lay down upon her.

Do come to the book’s London launch on 22nd November. If you take out an annual subscription to Dark Mountain you can buy this issue for a reduced price.