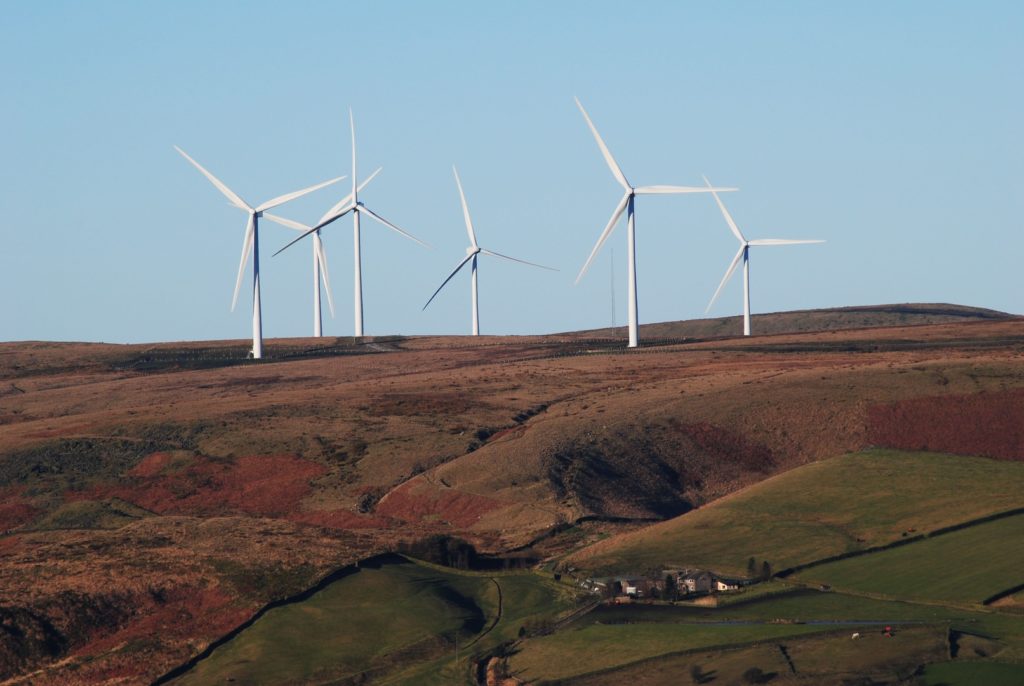 'Sustainability'
David McKay
Share
History has a habit of repeating itself, especially in the countryside. It sounds so familiar: people and groups in rural areas mobilising against a new wave of environmental destruction and private money-grabbing by the landed gentry. Such a story would normally stir feelings of solidarity amongst environmentalists – but this time the battle lines are drawn differently, and environmentalism finds itself strung across them.

The march of wind turbines across the land has been ongoing for some time, but a step change in their pace is being prepared. The government and the EU have laid down the expected percentage of renewable energy needed to paint the status-quo green, and wind is so far the most readily available paintbrush. With climate change ever gnashing at the heels of their consciences, many environmental groups have come out for the plans or challenge them to do more.

In the face of such a predicament, the argument goes, surely we must do whatever is needed to decarbonise energy and sail into a brighter, renewable energy future? Against this dream are the dreaded NIMBYs – those who block the golden path to the future with their selfish obsession with aesthetics and presumably only motivated for their house prices. Sure, we love the Hills, but with climate change round the corner surely we can sacrifice some of them to prevent a bigger and more important problem? We can even convince ourselves how great they look – ‘like monuments to optimism, common sense and human daring… in tune with the natural world’.

This narrative has taken root to varying degrees amongst environmentalists, from the well-we- have-to-do-something-ites through to the passionate prophets of ecofied-business-as-usual. But something’s not quite fitting well with this narrative any more: the NIMBYs are not playing their selfish and foolish part as expected – they’re behaving like old-time environmentalists instead.

Rural people in Wales and Scotland have also increasingly begun to point out how the remaining near-feudal landlords of the countryside are using wind power to rake it in in spite of the local people’s wishes, whilst escalating land prices beyond normal people’s reach. Lovers of the dwindling remnants of this island’s semi-wilderness are crying out at their slow industrialisation for their own protection, with the roads, pylons and concrete pads cutting through once lonely moors and hills. Alastair McIntosh has spoken of how ‘Landowners have woken up to the fact they can make a heck of lot of money at the expense of those who have lived there for generations. There is a world of difference between a wind farm controlled by a local community and one imposed from outside by a landowner and a multinational company. The people benefiting are the ones who have always worked the subsidy system’.

This doesn’t fit the usual narrative though; don’t we normally back David against Goliath?

But it’s not just local NIMBYs who are raising objections – national conservation groups and charities are getting involved too. The John Muir Trust, who are dedicated to fighting to preserve and restore wild areas in Scotland, recently opposed a site in view of the Cairngorms semi-wilderness in Scotland. The RSPB caution against sites near to bird routes and reserves which could cause chaos for wildlife, whilst the Campaign to Protect Rural England believe that ‘While wind energy can make an important contribution to tackling climate change, CPRE believes this should not come at the expense of the beauty, character and tranquillity of rural England’. Their president Bill Bryson only recently declared that “This countryside – ‘incredibly beautiful, dangerously finite and infinitely precious’ – will continue to change, as it always has. But the speed and scale of the change we are now seeing as a result of the proliferation of wind turbines is immense and threatens to damage the character of many landscapes for at least a generation.”More provocatively, the National Trust’s chairman recently described wind turbines as a ‘public menace’ which the Trust had begun to regard with ‘deep sceptic[ism]’. Whilst the Trust’s PR rapidly spun into gear and said this ‘didn’t chime’ with their actual policies, they still maintain official caution over where turbines are sited and their scale, emphasising how they should fit in with the landscape and not oppress it. As it’d take so many acres of this island’s dwindling semi- wilderness to be industrialised for wind power to hit its targets on land, it seems impossible that it won’t trigger yet more and intense protestations and actions from locals and conservationist groups.

Environmentalist arguments for wind farms often focus on how climate change could present more of a threat to these semi-wild lands than the turbines themselves, and so the turbines are the lesser of the two problems. However, this argument loses traction confronted with a scientific review which found that the greatest overstep of biospheric limits so far is not in fact climate change, but instead habitat and biodiversity loss (climate change is in third place of those so far quantified, one behind nitrate pollution). When moors and grasslands rich in life and diversity are dissected by roads and pylons for turbines seemingly in their own defence, one is moved to question just what are we trying to save (and as another example when projects like the Severn Barrage threaten so many bird reserves for minimal carbon cuts).

What’s striking is how the terms environmentalists use have shifted since the heyday of the sixties, when inspired by wilderness and preserving the beauty of nature against being swallowed up by hegemonic industrialism, modern ‘environmentalism’ was born. Now most environmentalists tend to talk in terms of government targets, megawatts and tons of carbon, whilst the conservationists and locals talk of beauty, tranquillity and nature. ‘They will industrialise the uplands with wind turbines and desecrate our valleys with hideous cables and pylons. The scale is almost impossible to comprehend’ – if we replaced wind turbines with some other industrial process, would this be more out of place in the mouth of an environmentalist or the Tory MP Glyn Davies? Indeed, traditionalist rural Tories have made the government increasingly uncomfortable over wind energy and have begun to make ground in their campaign against modernist “turbine toryism”.

It seems ironic that many of the conservation groups listed that are leading the defence of nature for its own sake were set up for implicitly anthropocentric reasons – preserving landscapes for people to enjoy – whilst environmentalist groups have drifted from the original ecocentrist inspiration of their project to exclusively consider environmental problems from a technocratic and decidedly human-bound standpoint.

Discussion of reducing fossil fuel emissions are still of course necessary, and the argument that climate change could impact some of this wild areas more than the turbines may hold water in some cases. But today the carbon-counting perspective is so dominant and all-pervading in environmental discussions that the original inspiration found in the sheer beauty and wonder of nature and life is forgotten amidst the statistics and policies. Do we have to sacrifice all wildness for every gram of carbon to be saved? Can beauty be sacred from carbon cuts?

Whether environmental NGOs can turn back from the narrow-minded focus on carbon they now exemplify so well is up for debate, but I suspect their ‘brand’ image is now too embedded within the simplified carbon techno-narrative and their budgets too dependent on the big money that focus brings them to be able to broaden their horizons again. Despite their far more anthropocentric roots it seems the best spokespeople for this island’s beautiful places is increasingly the traditional, member-supported conservationist charities like CPRE and the National Trust (rather than the corporate-supported greenwashing behemoths) who recently led the charge against the watered down planning reforms for an automatic yes to developments and whose support lies more in distinctly non-activist circles rather than with environmental activists.

If we are to bring beauty and wildness back on to the political stage these organisations deserve support from those who may traditionally have not gone to such seemingly conservative bodies – by keeping their traditions they have accidentally become the radicals as the progress narrative has become increasingly narrow and hegemonic. Is there still a space for grassroots “activism” as well as this? I think so, but not as practised by the seasoned modern-day environmentalist organisations or activists – perhaps small, local groups focused on defending and stewarding their surrounding landscape (the local watershed for example) and working without the suffocating bureaucracy of the institutionalised NGOs (or for that matter the activist sub-cultural gumph found in many campaign groups) could be a workable model. One thing’s for certain though – I don’t believe we can leave the job of protecting our beautiful island and its last semi-wild corners to the environmentalists any more.

PS: Before anyone points this out in the comments, I use ‘wild’ not in the untouched-by-humans-at-all sense – I’m fully aware of how this doesn’t and can’t exist in a pure way and that this is an important point – but in the sense of places where humans have a light impact and one which is not mostly for our own purposes (so the ‘unproductive’ moors for example).