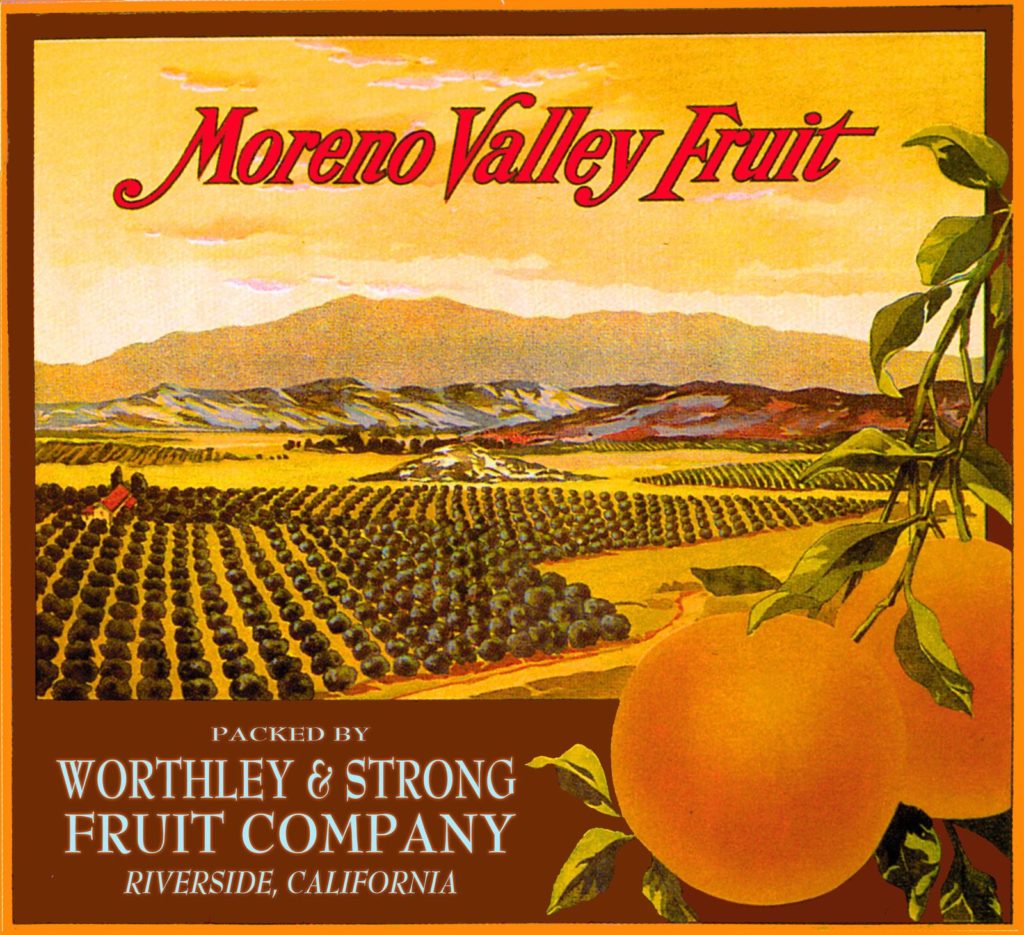 Vintage orange crate label, southern California
Christopher Records
is a writer from Los Angeles. His first book, Care: Stories, was published in 2020 by Inlandia Institute, a small press in southern California.
Share
I go to visit my grandparents in a big, carpeted, air conditioned cube in San Dimas. The cube is faced with a colossal mosaic of the life of Christ. It extends the length of the mausoleum. The mortuary staff scrub the surface every few months. San Dimas is one of the smoggiest places in the country; left untouched, the vivid blues and golds of the Last Supper, Gethsemane, and the Crucifixion would grey and blacken, turn, like the faces of untended windows and walls, to the colour of the air that touches them.

Inside, a floor down and four vaults up, my grandparents are interred behind a slab of marble. It was my grandmother’s choice. ‘She didn’t like the idea of the Earth,’ I remember my grandfather telling me when she died. She didn’t like its reality either. And so, in a way, for a time, she avoided both.

For Southern Californians, the idea and the reality of the Earth, accepting and turning away from it when we want, romanticising and ignoring it, enjoying and exploiting it, are much of what it means to be from here. We are confident in what it means and what it does. We know what it’s capable of, what it can be used for, what moods and memories it can make when properly manipulated. We remember it as something benign and loving: vineyards that fruit, the sun that warms us just enough, the perfect blue that fills the windows of the car as it glides along the Pacific Coast Highway, the smell of orange blossoms that makes the early evening feel and smell young and warm, that has, for a century, made ‘California’ a synonym for ‘mild’, ‘comfortable’, ‘beautiful’.

The smell of orange blossoms that makes the early evening feel and smell young and warm … has made “California” a synonym for ‘mild’, ‘comfortable’, ‘beautiful’.

When people come to Southern California, they come here for this. When they are born here, they are likely born here because their parents or grandparents wanted it. A place of escape for people who want to be away from extremes, people who’ve had enough of frozen Februarys and humid Julys, Atlantic hurricanes and Great Plains tornadoes, Dust Bowls and Polar Vortexes. They come here, these people, away from ‘the idea of the earth’ as something powerful and inconvenient, something unpredictable and capable of harm.

In this last year, while the pandemic has moved through and over our lives, those of us who have known this region for our whole lives have had a chance to re-play its past and preview its future. Last  March, when the freeways emptied, the news reported that the skies above Los Angeles had not been that clear since the 1960s. That month, from a turn off in the Angeles National Forest, I could’ve sworn I could see clear to the foothills of the San Bernardino Mountains, near where my mother lives, 50 miles to the east. That month, from my own little concrete patio, I could make out whole constellations that I had never seen with my own eyes. That month, the Sierra experienced a ‘Miracle March’, with 62 inches of snow in some places, a godsend in a region that has become permanently drought-stricken. And in August and September, when the San Gabriels burned, the air outside my condo in Northeast Los Angeles was the worst it had been since the 1990s, and, in the San Fernando Valley, about 10 miles away from where I live, the temperature reached 121 degrees Fahrenheit, the highest ever recorded. Standing outside my door that month, I couldn’t see even the vaguest impression of the Downtown Los Angeles skyline, just four miles away.

In the months between those two states, between idealised memory and the reality to come, with everything else closed, all other distractions off limits, people rediscovered the pleasure that the land around and behind and above them could provide. We went back to the beaches and mountains, public gardens and public forests, lakes, rivers, deserts. We breathed them in with all the hunger for openness and boundlessness that confinement makes almost unbearable. For a while, our landscape went topsy-turvy: empty mall parking lots, storefronts, schools, and freeways, crowded hiking trails, campgrounds, wilderness look outs. For many of us, it was the first time since we were children that we returned to the ‘empty’ places all around us, discovering what had happened to them in the 20, 30, 40 years since.

It was the first time since we were children that we returned to the ‘empty’ places all around us, discovering what had happened to them in the 20, 30, 40 years since.

What we found is a land that is increasingly hard to see as beautiful or benign. Those old, luscious descriptions of Southern California, redolent of jasmine, fertile with figs and olives and citrus trees, hedged on one side by the perfect Pacific and on the other by Joshua trees and endless, immeasurable stars, read as false today as the old California dream of easy to purchase houses in safe, clean, comfortable suburbs.

In my dog-eared copy of Joan Didion’s The White Album, I re-read her essays about wildfires of a few thousand acres propelled by Santa Ana winds and find them almost laughable. This past summer, three million acres of our state were on fire. The black cloud that they generated joined with equally black clouds rising above Oregon and Washington and British Columbia and drifted east as far as the Atlantic. Didion wrote those pseudo-apocalyptic essays in the 1960s, in air that was normally as clean and fresh as it was in the days when the whole city of Los Angeles shut down in March. For her and for my grandparents, when they were young and first arrived here, the worst that the climate could offer was equal to the best I’ve ever experienced. And I imagine it will be even more so for those who come after me, who look back with greater incomprehension from an equal distance on this land in this time.

‘What a paradise this must have been’, I find myself thinking more and more. I do not know what I mean by it. Whether, when I think it, I see the vague outlines of the life that once flowered here that I wouldn’t be able to identify on sight, Cleveland sage and California poppies and grey foxes, nature hewing to its own requirements, fruiting and dying in its own way. Or whether I imagine what it must have looked like when my grandparents first came here in the 50s, when the landscape was already dominated by orange groves and palm trees and lawns and track homes and freeways and we were well-underway in our project to remake this place into a ruin of itself. Either way, I look for something else I cannot clearly see, a hazy and indefinite past of stability and solidity, in a turbulent present that I know must resemble it less and less, mindful of a future that will make the present the paradise of those born here today.