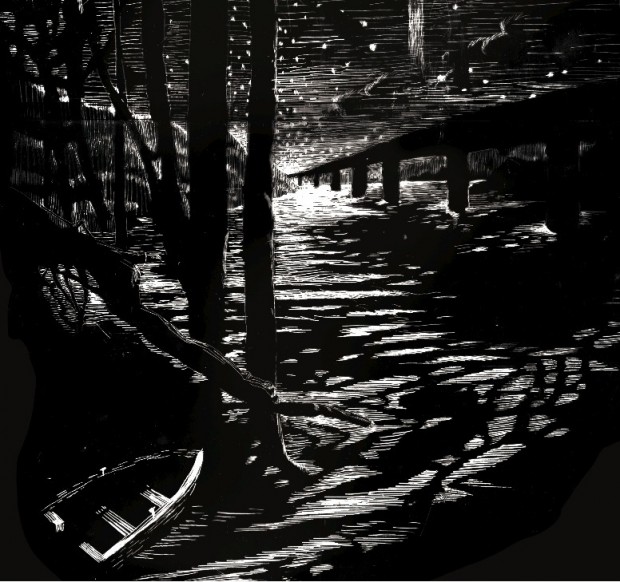 Detail from cover of Dark Mountain: Issue 5
The Editors
Share
Is there anyone left who actually believes in progress? Even the advocates of neoliberalism fall back to the argument that there is no alternative, no longer making much effort to convince us that capitalism is improving our lives. In the spring of 2013, a survey of public opinion in the US, the UK, France and Germany found large majorities in each country believe that today’s young people will struggle to achieve the standards of living of their parents’ generation. Welcome to the new normal: the grim meathook future creeping into our lives, fulfilling no apocalyptic fantasies, but slowly, undramatically unravelling the fabric of the world in which we grew up. Even the nightmare of climate change makes its way into waking reality as a muddled, muddy sequence of events which, though together they amount to a threat to civilisation, do not satisfy our idea of how such a threat should announce its arrival.

This is where we are, in early 2014. At this point, even a recovery in the official measures of economic progress serves mostly to emphasise the gap between those measures and everyday experience. It is not surprising, then, that the arguments we were making five years ago when we published the Dark Mountain manifesto are heard more often and in some unlikely places, or that media coverage of this project no longer takes the form of reflex denunciation.

Meanwhile, when someone does speak up for the idea of historical progress, it is no longer with the bemused confidence of one reasserting the obvious; instead, the argument is made more often with the intensity of a defender of the faith taking up arms against a sea of doom, relativism and nostalgia. This is an attitude anticipated by Charles Leadbeater’s Up the Down Escalator (2002), or the interior monologues of Henry Perowne in Ian McEwan’s Saturday (2005), and it echoes the embattled certainty of the New Atheists. Fresh strains continue to surface, not least among certain bright young radical thinkers for whom a rebooting of the Promethean project of modernity has become a daring, avant-garde position. The most striking example is the group of philosophers gathered around the Accelerate manifesto, published last year, whose ambitions for humanity are summed up in the slogans, ‘Conquer death!’ and ‘Storm the heavens!’

Our extraterrestrial future features strongly in the Accelerationist writings, a ‘Maximum Jailbreak’ from a planet conceived as a prison. A similar attitude underlies the recent suggestion from Steve Fuller, professor of sociology at Warwick University, that the axis of politics is undergoing a 90-degree rotation: left and right, he argues, will be replaced by ‘up’ and ‘down’. Or, as the disaster engineer and sometime Dark Mountain contributor Vinay Gupta puts it, ‘Pretty soon, you’re going to have to take a political position: either pro- or anti-Mars base.’ So far, so sci-fi, but this reorientation is suggestive. Because, whatever other reasons are given, it seems rather as if space has now become the final refuge for a promise of progress that is out of credit here on Earth (Another tactic, with a similar undertone of desperation, is to borrow against the threat of apocalypse: ‘It has become a case of utopia or catastrophe,’ argues sci-fi novelist Kim Stanley Robinson, in a lecture at New York’s Museum of Modern Art, ‘and utopia has gone from being a somewhat minor literary problem to a necessary survival strategy.’)

The other notable thing about the off-planet version of progress is how far removed it seems from everyday reality. This is not simply a matter of physical distance: in the 1950s and ’60s, the Space Age was able to capture the collective imagination, and the contrast to today is telling. It is not only readers of Dark Mountain who find visions of the rocket-propelled future weirdly anachronistic.

Keep following this line of argument and it could start to sound as if the myth of progress were a spent force, but this is too simple a conclusion. We live within a physical and a cultural infrastructure, built up over generations, much of which would have been unthinkable without the way of understanding the world contained in that myth. The sheer weight of these structures still carries our societies onwards: if we do go to Mars – as Tim Fox envisages in the opening essay of this issue – it will be by default rather than with enthusiasm, propelled by the momentum of a faith in which almost no one still believes, or rather the naked momentum of the exploitation machine which that faith once cloaked.

This leaves us with a challenge that goes deeper than argument: to extricate ourselves from deeply ingrained habits of thought, and to do so with care, with an attention to how we treat one another, with a realism about our vulnerabilities and our ongoing dependence on systems with which we are often far from comfortable, with an imagination capable of finding infinity in an hourglass. The Dark Mountain Project is not a political incubator, hatching the ‘down-wing’ of some new vertical alignment of politics (as if what the world needed were another binary opposition). Nor is it exactly what we thought it was, five years ago, when we wrote a manifesto for something like a literary movement. If only things were that simple.

It may just be one space (among others) in which people are able to find each other and start the kinds of conversation out of which new ways of making sense of the world take shape. There is no promise about how far this process will go or where it will take us – and the experience of these first five years has taught us to be open to unexpected turnings. Still, when we turn back to our earliest public attempt at framing the intentions of this project, it still feels like work to which we are alive, worth doing for its own sake, with no promises and no guarantees:

Words and images can change minds, hearts, even the course of history. Their makers shape the stories people carry through their lives, unearth old ones and breathe them back to life, add new twists, point to unexpected endings. It is time to pick up the threads and make the stories new, as they must always be made new, starting from where we are.

Thank you to everyone who has joined us over the past five years in the process of picking up the threads and remaking the stories. We hope to see you somewhere along the way.