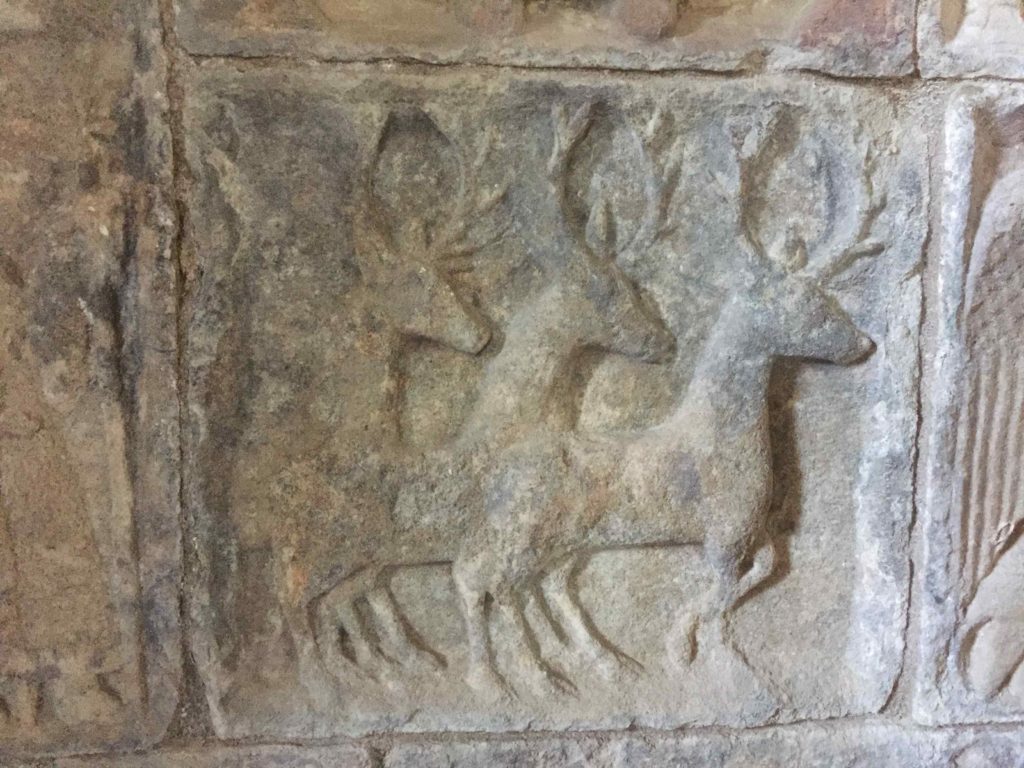 Red deer on a medieval tomb in St Clement’s Church, Isle of Harris
Alastair McIntosh
is an independent writer, broadcaster, speaker and activist who is involved in a wide range of interconnected issues, from land reform, globalisation to spirituality and ecology. He is the author of the bestselling Soil and Soul: People versus Corporate Power;
Share

Out here, it’s mainly dark beds of heather interspersed with little greens of tough and spiky grass. Pools of water, mostly shallow some profound, lurk amongst the bare rock sheets.

It’s now so dark you have to second guess each step. You have to walk with toes upturned to reduce the chance of stumbling. They used to say in Inverness that city dwellers could tell the country folk by their ceum a’ mhonaidh – their ‘heather loup’. Test every footfall with your heel before committing weight. Watch for hidden trips and dead man’s drops. Watch, too, for wider patterns in the land – the flow of shadows that distinguish different types of vegetation, or the raised ground from the dips, or the dry from the wet. Let the eyes accustom to these mottled shades of grey and black, for here is ‘relief and drainage’ abstracted from the abstract school geography books. Here it is, all set out in the raw.

I remind myself (as if to give a pinch) that if I hear a sudden shriek, it’ll just be some poor critter, startled from its slumbers, and more alarmed than me. But all is still. I haven’t even heard the drumming of the snipe. The night has claimed the day, and cold itself stands watch and takes the helm. The moon is on the wane this week and won’t be out ’til after midnight, but when she rises, there she’ll ride. Banrigh na h-oidhche – the Queen of the Night. Lòchran àigh nam bochd – the Joyful Lamp of the Poor.

It’s written that, in both the Catholic and the Protestant districts of these parts, when folks would first catch sight of the new moon they’d greet her with the invocation:

And I have to say, that kind of peasants’ Christ attracts me more than the arid version of urban theologians. Give me any day the one who’d go and pray alone up mountains, who’d wander with the angels and wild beasts.

The village has dropped out of sight. I come up to a flattish spot of moss and grass. This will do to pitch my tent. Up it goes, more by a sense of touch than by the light of dithering torch. It looks a little kinked, but no-one will be looking. It’s good enough to do the night, especially as the mink trapper had said the forecast was for cold but calm. I feel my fingers numbing as I blow into a valve and roll out my mattress, fluffing up my sleeping bag to lay it down. At last, I crawl inside with a cosy sense of relief, zipping shut the flaps as if to roll a boulder across the entrance of my cave. Only then does it occur to me: I clean forgot to eat! Oh well – I’ll just have to take recourse to childhood reading on survival training. The Famous Five, with their chocolate bars beneath the stars.

I’m lying here, aware the stars are out above the flysheet. When we were young growing up on the island, the old folks used say that on a moonless night, they’d move from house to house by just the light of a glowing peat taken from the fire. You could make a biography from those peats. Their great migration paths from hearth to hearth. Their kindling, dying and rekindling. The stories that they’d hear along the way.

It would be fun to walk at night by just the moon. Not even with a compass, just going by the Pole Star. And no way, GPS! But satellites – now, they’re a strange addition to the constellations.

I remember the first time I ever saw a satellite, transiting across a Hebridean sky.

In those days, when the nights were mild, Dad and I would go out fishing once he’d finished with the evening surgery at seven.

It would be just him and me, out on a moorland loch. He’d be on the rod. Me, at the oars. We’d talk, and catch the evening rise. We’d usually land a few, then drive back home. He was kept so busy with his burden of responsibilities. It was probably the closest that I ever got to him, just a boy and a man, together in a boat.

I think it must have been September or October. Which, exactly, doesn’t matter; but it must have been late in the season, for although the nights had not yet chilled, twilight had fallen fast. We were out on Loch na Craoibhe – the Loch of the Trees. It lay at the end of the peat cutters’ road, up from the council houses at Balallan. It had an island full of rowans, safe where the sheep couldn’t get at them. Dad and his good friend, Dan Smith of Sildinis, had stocked the water with a golden-coloured strain of hybrid trout, called Sunbeam. They’d been given the fry by the Highlands Board. This was in the experimental days of fish farming and restocking.

Dad was single-handed at the time, on call 24/7, with eighteen hundred patients for whom he had to be available. He held his patients like a hen would mind her chicks. The loch was up behind the police station. If needed, they would come and fetch him for emergencies. For a time, the Balallan folks called it ‘the Doctor’s Loch’. That’s how places get or change their names. They knew he couldn’t go and fish just anywhere out on the distant moors. Poachers, though some were, it’s said they did the decent thing, and left the fish on Loch na Craoibhe to him and Dan alone – there is a poacher’s honour.

That night, the evening rise had run far on into the dusk. Dad was reeling them in, and me, scooping them up with the landing net in virtual darkness. Nice half-pounders mostly. I asked how they could see his three tiny flies in such poor light. He said they felt vibrations in the water down the lateral line. That’s why the twitching motion of the rod must be just right.

We filled the wicker basket with a hefty haul. Then the wind dropped. It went flat calm, and that was them, gone off the take. Usually we’d have packed in there and then. But this was such a ‘glorious night’, as Dad would say. That was his favoured turn of phrase. He laid his rod across the stern, lit a cigarette, and passed me back a chocolate bar.
I shipped the oars and crossed their butts beneath my knees. We drifted, pensively, out from the island of the berry-laden trees, off the headland where the water lay the deepest. The world had settled to a hush untroubled by the slightest ripple. The sky was settling down to midnight blue on charcoal.

Then we saw the fires come out. Odd embers blown ablaze at first but gradually, the speckled sheen of shimmered starlight right across the Milky Way. And we were there. Inside of all of this. Just the two of us.

A shooting star streaked by, and then another. You glimpse your life as held in cosmic splendour on such a night as this. Dad pointed out a satellite, a sight still rare back then. We watched the tiny speck of light, as if a distant carriage that was lantern-lit and pulled by pounding horses through the freckled constellations.

Such depths of silence let you feel another person’s spirit. In ways I hadn’t known before, I felt Dad’s layers of being. His qualities of presence. His standing, in the sense of all he stood for. I was growing up, and he, it must be said, was growing older.

The satellite crept ceaselessly across the sky, and both of us were rapt, transfixed. Each knew it meant our world was changing. Such signs had not been seen before in Heaven or on Earth. We followed, wordlessly, like shepherds watching flocks by night.

For me, I have to say, I felt the surge of youth’s excitement. It was Apollo’s age when men from NASA reached out to the moon. We were in the space age, right here, right now; and there’d never been a thrill before quite like it – or, for that matter – since.

Dad sat straddled across the wooden thwart. His thick Harris Tweed jacket. His conspicuously Victorian plus fours and gartered socks. Back then, his white or chequered shirts would last a week. Their cuffs and collars were the olden sort, that could detach for daily washing and a dash of starch.

He was conservative in politics, as many country doctors those days were. That said, he was an ecologist of both planet and the body. A man who planted trees, who kept a tank of tropical fish for patients in the waiting room, who delivered a whole generation of babies with the district nurses, and who prided himself on having one of the lowest prescribing rates in the north. 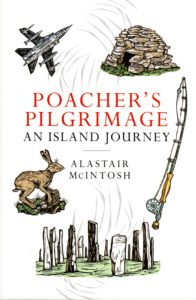 He didn’t believe in a pill for every ill. Instead, he’d make the time to sit with failing patients, to hold their trembling hands, to share about life’s meaning and the future of the world.

That night, we watched the satellite go down on the horizon. I wondered when it would come round again. I wonder, now, what went round in his mind?