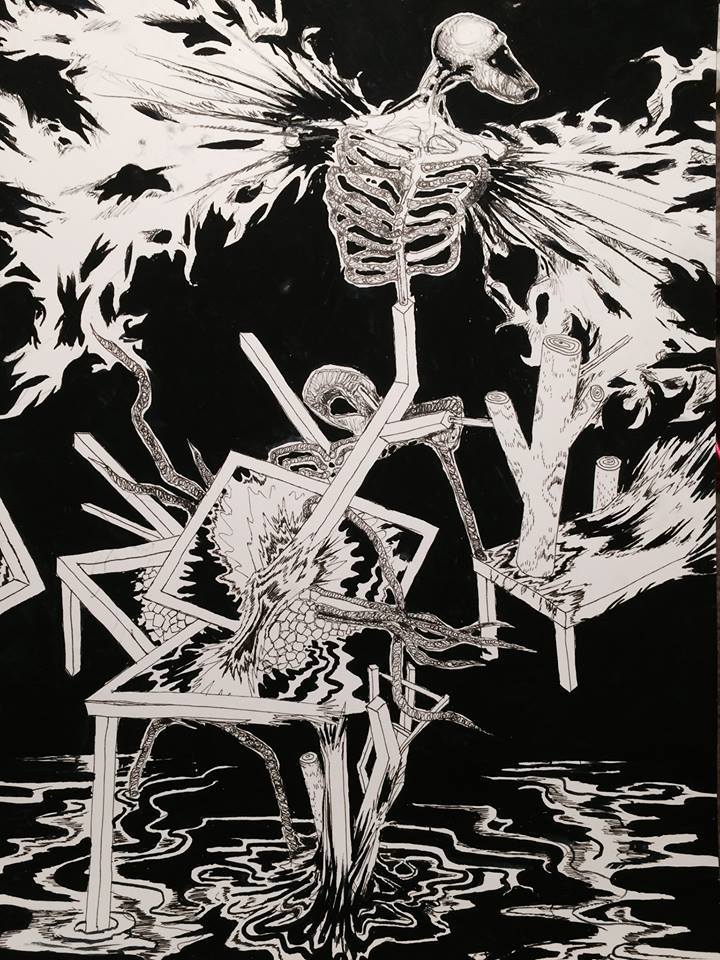 Illustration by Mary Church
John David Ebert
is a cultural critic and author of 19 books of cultural criticism, including Art After Metaphysics, The New Media Invasion and The Age of Catastrophe.
Share

Civilisation begins in wonder and awe: the visions of the planets crawling across the ebony sky; the descent of gods from the heavens who came down to take up their dwellings at the tops of ziggurats; the building of the pyramids; the raising of the cathedrals, with their transformation of the metaphysics of light into the jewelled phenomenon of the precious stones of the New Jerusalem; in every single case, it is wonder that is the motivating principle that brings new civilisations into being.

But the vision that brings the civilisation into being, alas, is mortal and eventually dies out. As the inspiring Idea is depleted through the process of incarnating it repeatedly — in art, science, music, literature, etc. — the society loses touch with the vision, and ends by becoming a practical affair of engineering achievements and technological wonders. Hence, the movement from Zeus, Apollo and Athena to the degeneration of the Colosseum, the Roman aqueducts and the huge forums that function as technological supplements and replacements for the beauty and majesty of the early gods. And when that inspiration finally loses touch with the spark that set the initial flame, the flame sputters and dies out and it cannot be revived.

This was the informing vision of Oswald Spengler’s 1918 book The Decline of the West, which Spengler had inherited from Goethe who, before him had taken it from Vico, while Vico borrowed it from Hesiod.

I have structured the following division of poems in accordance with Oswald Spengler’s cultural cycle of the birth and death of civilisation, dividing the first half into ‘Poems of Genesis’ filled with a sense of wonder and awe at the mysteries of the world as a revelation unto itself. In the second half, ‘Poems of Degeneration’, the mystery is gone and technology has taken over, enframing and blasting the world with technological substitutes: in the first cycle, living forms, stars and atoms are made by gods which constitute a powerful revelation of their informing energies. In the second cycle, technology attempts to appropriate the powers of these gods by stealing their creative abilities and substituting them with analogues in the form of genetic engineering, splitting the atom and technical wastage of the planet.

The poems below are from the forthcoming collection These Things We No Longer Are.

It was not possible
But one day they were digging
And they found the skeleton of a centaur.
In the hot dry dusty air,
They swept the dirt from the bones
Astonished as they examined the vertebrae
Which dissolved and fused with the backbone of a horse.

For a while they simply stood there
And no one knew what to say.
And the empty, scared faces of the archaeologists
Stared at one another, aghast.
But after a debate that lasted all afternoon,
They came to a resolution
And buried it again.

No one was ever allowed to speak of it
And they all agreed that it had somehow been a mistake
of perception.

Meanwhile, the bones of the centaur slumbered beneath the dirt
And returned to the earth’s memory
Where it dreamed of an age of gods with legs like serpents
And men with the hooves of horses.

It lay there upon the sand
A wreck from a vanished age
Rusted metal tubing and pipes
Massive chunks of curved concrete
Huge, fossilised, dreaming of another life

But in the desert where palm trees drank the hot sun
People lived in it: they built little houses made out of palm
Trees upon it and they crawled in and out of it
Finding decrepit metal chunks to be used for this or
…..That task
They knew not what it was or what it had ever been
For they had no memories of the glorious civilisation that had been there long, long ago.

One day, some shaman among them said that he had had a dream:
Where they were living there was enormous power buried under the ground
Power that had once been harnessed to run entire cities
And that they must leave at once.
Evil magicians, he said, had cast a spell upon the place.
But nobody listened.

And, one by one, they all sickened and died.

Mary Church is an artist whose work is featured on the cover of the poetry collection entitled These Things We No Longer Are.