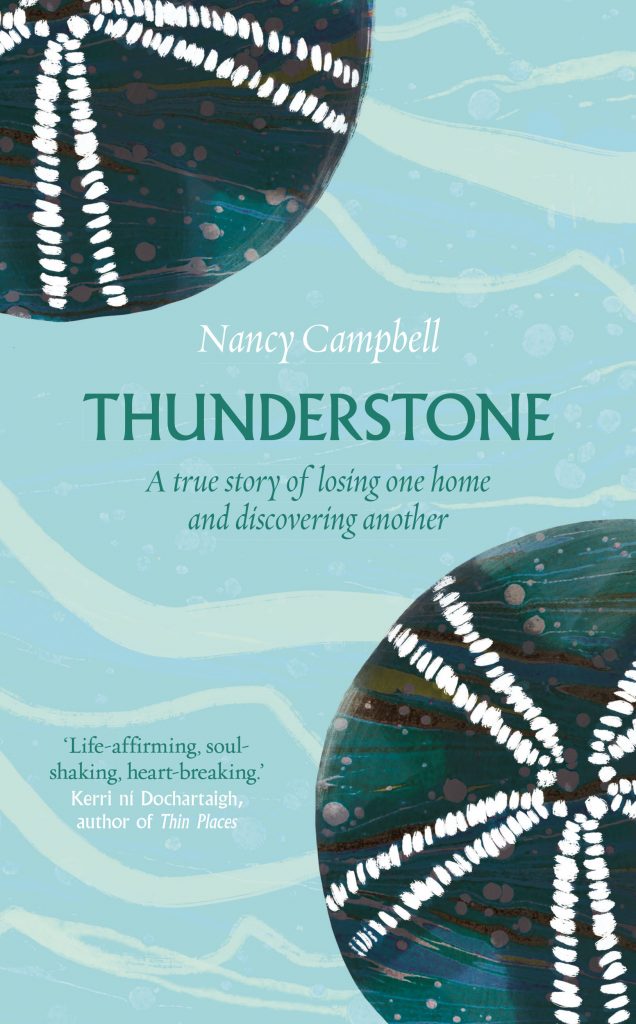 Nick Hunt
Nick is the author of three books about walking and Europe, the most recent of which is Outlandish, a work of gonzo ornithology, The Parakeeting of London, and a collection of short fiction, Loss Soup and Other Stories. He works as an editor and co-director for the Dark Mountain Project, and has contributed short stories and essays to many of its issues.
Share

Thunderstone: A true story of losing one home and finding another, by Nancy Campbell (Elliott & Thompson, 2022)

One of the most striking things about the covid pandemic was how everyone who experienced it experienced it in different ways. On the surface the factors were the same – the same virus, the same restrictions applying (at least in theory) to all – but its impact on people’s lives was jarringly diverse, depending on health, income, class, social status and geography. On one level lockdown brought unprecedented communality; on another, people’s lives had never seemed further apart.

The same might be said for collapse: it’s a different collapse for everyone. The macro collapses might be the same – economic, political, environmental – but micro collapses play out in endlessly varied ways in individual people’s lives, creating different stories. Thunderstone is about the place where collapses converge.

Nancy Campbell’s latest book (which had some of its roots in her contribution to ‘Dispatches from a Stricken World’, a series on the Dark Mountain website responding to the pandemic) charts four months at the intersection between personal breakdowns of various kinds – physical, emotional, financial, existential – against the backdrop of the housing crisis, spiralling inequality, the climate emergency, and the general sense of everything coming apart at the seams. Together, these circumstances combine to plunge Nancy into a life she could never have foreseen: a tiny, ramshackle caravan in a community of boat-dwellers on the literal and metaphorical margins, an area once known locally as the Gates of Hell.

But these collapses open a gate not to hell, but home. After leading a peripatetic life of artists’ residencies from Greenland to Germany, and navigating a breakup combined with her ex-partner’s devastating stroke, the book sees Nancy coming to rest – like jetsam, as her friend Sven says – on the weedy, overgrown bank of an Oxford canal. Deposited by a retreating tide over which she has little or no control, she makes her home like a castaway: arranging her books, nurturing seedlings, grappling with the fundamentals of electricity and water, and – perhaps most importantly – stitching herself into the everyday life of a community that by turns supports, frustrates, enlightens and delights her.

The rich, slow work of relationship-building is one of the main themes of the book, teaching true resilience against collapses yet to come. The thing that will save us, if anything does, is not the panic-buying of tinned goods but the mycorrhizal process of making friends.

The thing that will save us, if anything does, is not the panic-buying of tinned goods but the mycorrhizal process of making friends

Thunderstone is about collapse, but collapse is fertile compost. Seeds sprout best on disturbed ground; a healthy forest contains more rotting wood than standing trees; an overlooked verge running wild with ‘weeds’ is incalculably more alive than a landscaped lawn. Collapse can be generative, generous, vibrant and creative. In that sense, collapse can have the same qualities as this book.

I sit in my new, old deckchair, drinking coffee and reading Anna Tsing’s The Mushroom at the End of the World. A book about foraging, and forest lives. “Global landscapes today are strewn with ruin,” Tsing writes, yet she believes “places can be lively despite announcement of their death.” The first living thing to emerge from the blasted landscape around Hiroshima after the atom bomb was a matsutake mushroom. The prized matsutake –“the most valued mushroom on earth”, given as a gourmet gift in Japan – is a resilient renegade. It cannot be cultivated, and grows in wild and unexpected places. Tsing describes mushroom hunts deep in the Cascade Mountains in the US: Asian immigrants and refugees from the Mien, Hmong, Lao and Khmer communities gather, many equipped with jungle skills from theIndochinese wars. Harvesting matsutake becomes a salve for war trauma as well as a means of earning a livelihood.

The cuckoo calls. In May, I sing night and day. In June I change my tune.
A green amphitheatre surrounds me – the nettle leaves are too tough this late in the year for soup and risotto – but the seeds hanging in threads from the female flowers are rich in vitamins and, being a stimulant, they make a good tea. Some people even consider them an acceptable substitute for coffee. An inch from the van’s front wheel, there’s a small gooseberry bush. If we’d pushed a fraction further, it would have been crushed.

Six hawthorn trees in pots have appeared at the gate overnight. Hawthorn is the new currency of the canal. Everyone deals in them: mysterious drops, the secret code of saplings.

A woman pushing a huge golden chrysanthemum in a wheelbarrow stops, and adds the hawthorns to her load. I’ve seen Aislin in passing a couple of times but she’s been on a different trajectory, like a fast-moving centrifuge whose still centre rests in these woods. Now she loads the saplings into her barrow and comes up the path. She’s light on her feet, light of smile. “You need a bell for the gate, don’t you?”she says. “So you have warning of visitors. We’ll dig one out for you.” She asks if I’ll look after the hens while they go away for the weekend.

I’d love to. I tell her about the unexpected gooseberry.

“There’s a wild raspberry in the woods – you could take a cutting,” says Aislin. “I want to start a vegetable patch near the bee hives, too.” The soil is rich here,good for vegetables. Wildflowers prefer poor soil. Some people too, need to be put in a hard place to thrive. She gives me keen stare, and tells me about the forest tradition in Theravāda Buddhism, begun by Ajahn Mun, who was ordained as a monk in 1893. Ajahn Mun wandered the forests of Thailand, Burma and Laos, looking for secluded places where he would spend hours in meditation. Mun developed thirteen dhuthanga or ascetic practices, rules for living simply by eating alms and wearing clothes made from cast-off rags. Five of the dhuthanga relate to places of residence. Aislin recites them: to dwell in a forest away from village distractions; to dwell beneath a tree’s branches; to dwell on the bare earth without even a tree for shelter; to be content to dwell by the graveyard gates; and finally, the “any-bed-user’s practice” or yatha-santhatik’anga, to be satisfied with any dwelling you are given.

“You’re a nun,” she says with a smile. “A Buddhist nun visited us once… we had a caravan for guests then, and so we set up the sofa for her as a bed, like you have, but she slept on the floor – the cushions were too soft for her, she said.”

“I’m more of an anchorite than nun,” I say. “Like Julian of Norwich. Looking for visions.”

“Maybe you’re our hermit? Every wood needs a hermit.” She lifts the wheelbarrow. “I want to finish the hedge before we set off.”

Nancy Campbell’s memoir Thunderstone: A true story of losing one home and discovering another (Elliott & Thompson) is available in hardback now.