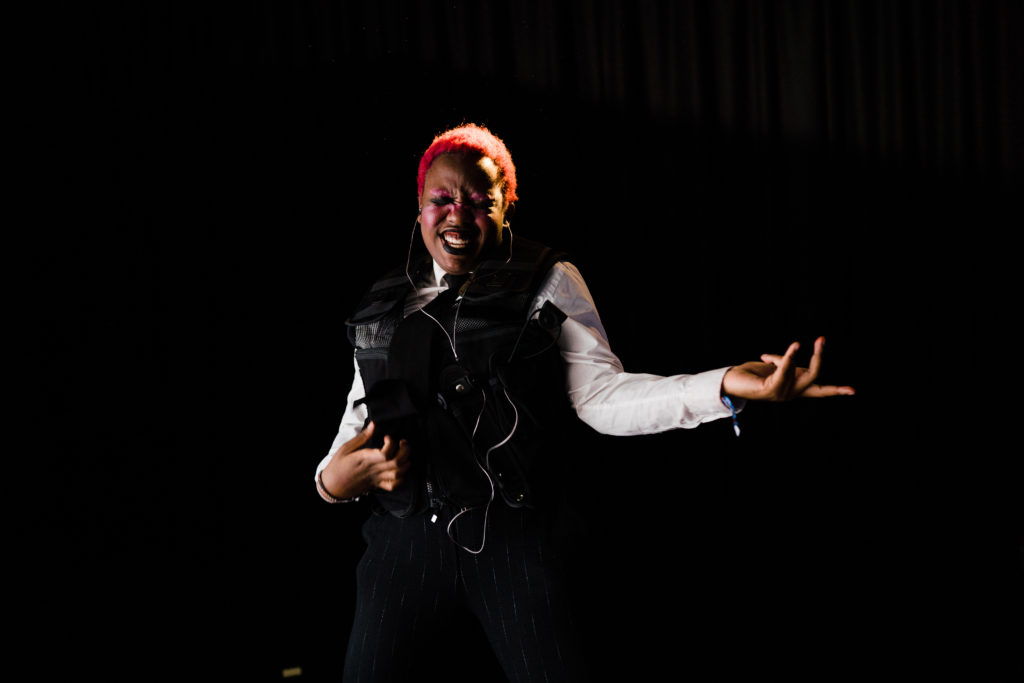 Jeff Denya in 'Choke Me', Sheffield, October 2019 (photo: Becky Payne)
Dr Harriet Earle
is a lecturer in English at Sheffield Hallam University and the author of Comics, Trauma and the New Art of War (2017). Her research interests include violence, protest narratives and biopolitics in comics and popular culture. She is in the early stages of her second monograph, on the topic of prisons and detention camps as biopolitical spaces in comics.
Share

In October 2019, anarcho-nihilist political theatre makers, Doppelgangster, brought a special theatrical commission to the Performance Lab at Sheffield Hallam University. This pioneering exploration of the climate crisis sought to expose the city’s smog-filled streets and blackened lungs through a satirical post-dramatic evocation of pollution in the Steel City. Choke Me was created by company Directors Tobias Manderson-Galvin and Dr Tom Payne for the environment strand of Off the Shelf Festival of Words; delivering comic riffs, rapid-fire physical spectacle under the movement direction of Sarah April Lamb, an ensemble drawn from Sheffield Hallam students, a jazz punk score by Melbourne based composer Jules Pascoe, and a collection of new and appropriated texts, from raging online panic to doom-laden rituals.

There is a meme that speaks to our contemporary moment.1 A dog sits in a burning room, wearing a jaunty little hat. He says, ‘This is fine’ and everything around him burns. And it speaks to the moment because we know we’re in the shit but yeah, it’s fine. We are in a position that no one could have predicted but one that makes perfect sense in retrospect. Far-right politicians are sweeping the West, the gap between rich and poor is not narrowing, and the planet is facing a climate catastrophe. And by facing, we mean ‘staring down the barrel of’. Growing numbers of people are panicking, organising, fighting. But most of us are the dog – feeling the heat but using it to toast marshmallows. This is fine.

Spoiler alert: this is not fine. Action is needed. Action is so desperately needed that we have become rabbits-in-headlights and cannot move. Greta Thunberg’s emotional speech to the UN was shocking and provocative. It got people talking. So do Extinction Rebellion, through protests and theatrical demonstrations. We’re past talking and playing nice. We’re at the stage of righteous anger, civil disobedience and rebellion. But Doppelgangster’s challenging and unsettling Choke Me is beyond this. The protests have failed and we’re in the countdown to the death of the Earth. We’re in the End Times. It’s the stuff of Revelation but with police conferences, screamo music, and blow-up swans. Across a range of short scenes, each one announced in voices reminiscent of the golden age of radio, the cast drags the audience through a countdown to the end. And nothing about this is comfortable.

We begin with a police press conference. People are suffocating in the stifling clouds of pollution. Stay calm. Bold lighting, monochrome costumes, stark face paint, deep booming music. I am not calm. Scene change. A book from my childhood (which, admittedly, is a fairly fucked-up book) is being recited in loud, harsh statements by an actor in black swirled face paint. An old woman who swallowed a fly, a spider, a cat, a… planet? The absurdity of my childhood reading fodder showing all my youthful ideas are moot and now there are planet-eating women walking around. What am I watching? Scene change. Screamo. Music.

CHOKE ME. Oh, this is the kind of thing I’d probably listen to while writing. Why am I so uncomfortable? This is not my normal. I like my music loud but there’s a terrifying urgency in this. Scene change. Someone is throwing beach balls at me. Scene change. The planet is dying – don’t bother coming back. Ground control to…? And now I can see vintage cartoons behind the steady, unflinching reminder of our impending doom. That’s an alarming juxtaposition. Why are you going after my childhood loves? Is it to remind me that childish naïveté is as bad as inaction… or to demonstrate the short attention spans of so many of us? The planet is dying.

Ooh, cartoons. Scene change. Death and Gaia have a chat. What’s going to happen? When will The Void finally engulf us all? Why won’t it get a move on?

The thickening smoke is time that has run out. All the time we had to do something made manifest in the thing that will suffocate us

There is smoke. A lot of smoke. And it feels like it clots the air. I am reminded of the thickening of time that Bakhtin writes about when he describes Madame Bovary. In Flaubert’s  classic, time thickens through inaction and banality. In Choke Me, the thickening smoke is time that has run out. All the time we had to do something made manifest in the thing that will suffocate us. The lights are harsh, and I find myself wanting to shut my eyes more and more. All my senses are being assaulted. This is not a situation I would necessarily choose to be in. I can imagine this smoke clotting and strangling us, just like the opening scene’s police conference warns us.

I don’t know what exactly I am thinking about Choke Me, but it has been stuck in my brain for a week now. When I teach literary theory (which can range from dull to total mindfuck), I tell my students, ‘You aren’t going to get this right away. This is going to bubble for a while before it brews. It will make sense in time. The more you think and the more you read,the more it will bubble’. They hate this and I understand that; we want quick answers and quick info2 . But what we want and what we need are two different things. The way of quick info is fine… but it is not the only way. And, as Choke Me shows, a kick to the teeth that burns slowly can be so much more effective. I pass climate change protesters in the street occasionally or ignore graffiti that calls for environmental change. It’s easy to ignore. Choke Me is not. I’ve been trying not to think about it since I saw it but it’s insistent.

1  OK, there are many. But one in particular for my purposes.