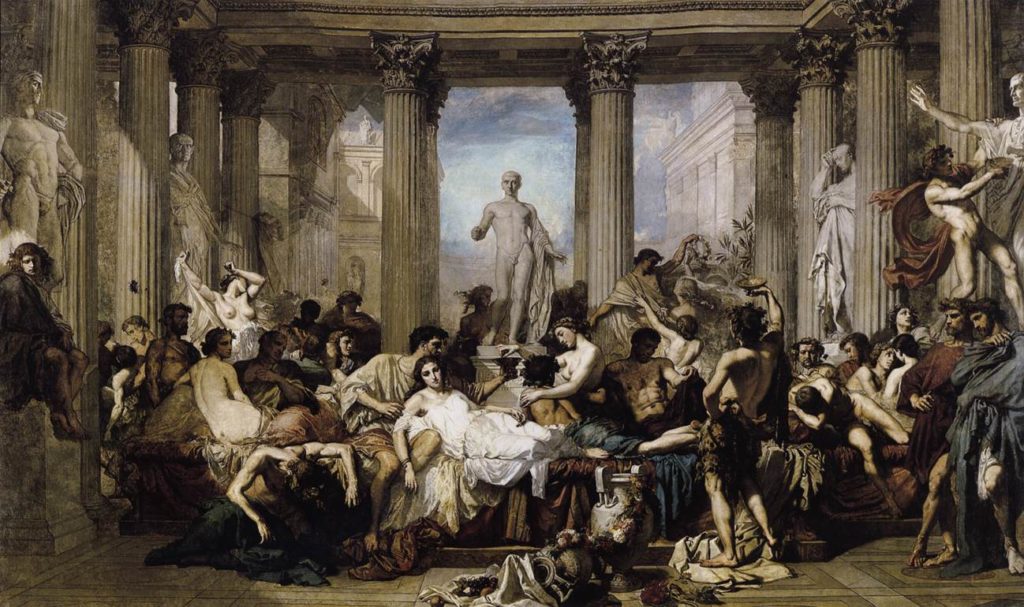 'Romans of the Decadence', Thomas Couture (1847)
Paul Kingsnorth
is the co-founder of the Dark Mountain Project, of which he was director from 2009-2017, He is the author of nine books - three novels, two poetry collections and four works of non-fiction - all of which, it turns out, tell the same story: how we walked away from the wild world, and how we might get home again, if we can. He runs the Wyrd School which teaches wild writing and art and lives in the west of Ireland.
Share
The week before last I was in Paris. While I was there, I paid a visit to the Musee D’Orsay in an attempt to build on my minimal artistic education. I’d never been there before, but the Musee D’Orsay turns out to be a great museum; a bit like Tate Modern in that it is a new use for an old building (in this case a stunning ‘Beaux-Arts’ railway station), but nothing like Tate Modern in that it contains art.

This is one of the biggest paintings in the museum: Romans of the Decadence. Seen for real, it is quite something: it’s staunchly old-fashioned, maybe even slightly pompous, but it’s executed with a real sense of belief. You can see why: it’s a campaigning painting. Here are some of the top people of the once-mighty Roman Empire, feasting and debauching like there is no tomorrow – which there won’t be, as it happens, largely as a result of the grape-sucking, fornicating, wine-guzzling loucheness of the ruling class here displayed. Clearly a rot has set in at the heart of things; a rot whose immorality is driven home, if it needed to be, by the figures of the two foreign visitors to Rome standing to the right of the picture, looking on the scene with undisguised contempt and disapproval. We have come, they seem to be saying, to what we were told was the heart of civilisation. And this is what we find. Decline, it is clear, is well underway.

Of course, this painting is not really about Rome. Painted in 1847, it was a comment on the perceived decadence of France’s ‘July monarchy’. A portrait of a society which the artist, Thomas Couture, a Jacobin and radical, believed was in danger of going the same way as Rome if it didn’t mend its ways and turn its gaze outward. When it was unveiled it was with an explanatory quote from the Roman poet Juvenal: ‘Crueller than war, vice fell upon Rome and avenged the conquered world.’

I wonder if there has ever been a generation, in any civilisation, which didn’t think, to a greater or a lesser degree, that its society was decadent, falling apart, betrayed by hopeless leaders, suffering from a failing system. Perhaps not. But the fact that this may be the case doesn’t disguise another fact: that it is sometimes true. Sometimes societies are noticeably in decline; sometimes a cultural decadence does set in. When it does, ferociously insisting otherwise may become a necessary survival mechanism, but it doesn’t arrest the slide.

This set me wondering about the society I live in. In some ways – ways which we have explored here before – it seems that an inevitable decline is clearly underway. This is the decline of the industrial world: the world that has held sway globally for two centuries. We’ve looked at this in economic and environmental and political terms: climate change, peak oil, ecocide, the collapse of political and economic narratives; the evidence is all there.

It is easy, in some ways, to point to things like climate change, peak oil or deforestation, or even the hardening of the democratic veins with corporate fat, as signs of an imminent collapse or decline, because at least to some extent these things are clearly measurable. But what about more malleable, fuzzy, cultural pointers? What about decadence? Because if decline is real, it should surely be obvious in the culture we make.

It seems to me that a healthy society would have a healthy cultural heart. Its art, its music, its literature, its manufacturing, its artisanship – its ability to make things, from songs to machines, and to make those things speak about its values and its dreams – would be strong. It would have a sense of itself in time and place which, if not identifiable immediately, would be so in retrospect.

Think, for example, of Britain in the 1960s: arguably the peak of the 20th century popular British state. Culturally, it soared: in music most obviously, but also in fashion, in art, in literature, in cinema: in all these areas there were real, lasting examples of making, from the Beatles to Mary Quant, from Billy Liar to James Bond, the Mini to the Routemaster. In retrospect, we recognise the sixties with ease: the clothes, the hair, the music, the art, the politics, the cars. It was a moment of cultural heat which left an imprint on time.

I think the same could be said of the seventies and the eighties, to lesser degrees: look back, isolate these moments and the things they produced, and you can see them for what they were: recognisable chunks of history, with their own cultural forms and responses. The nineties, too, just about cut it: from Grunge to Britpop, Irvine Welsh to Danny Boyle.

I wonder if this can be said of the first years of this century. True, we are not long past them, so the retrospective is not possible yet. But the first signs, it seems to me, are of a culture collapsing in on itself.

What great, era-defining books did the last decade produce? What cinema? We were neo-gypsies one season, neo-Mods the next. Music was uber-derivative, often literally cut-and-pasted from earlier forms; there was no real fire, no lasting gathering point for culture or subculture. The London stages filled up with nostalgic musicals based on the tunes of three decades before, the pop charts with whey-faced androids culled from corporate TV ‘talent’ shows. So many celeb mags now line the shelves that it’s almost impossible to count them; but they all run the same stories. Overall, beyond the specifics, was a sense: a sense that everything had been done, that we were killing time, treading water. Irony, cynicism, cleverness and perhaps most of all, money, were held up as shields against our cultural flaccidity. We had run out of stories to believe in.

Meanwhile, in the age of blogs and tweets and pirating and consumer choice, a generation has grown up believing that everything is free, everything has been done and nothing is sacred. Currently there’s a mini literary scandal going on in Germany: a hip young author has been caught stealing entire pages from another novel and pasting them into her own effort (which appeared, naturally, to rave reviews from middle-aged literary neophiles desperate not to look past-it.) When she was caught, though, she wasn’t cast into outer darkness: she was put on the shortlist for a prize. This, it was explained, is just what the kidz do these days: they mix and match; they ‘hypercontextualise’. It’s fine. It’s the new culture. ‘There is no originality any more,’ said the author, with no sense of irony, in her defence.

Our culture has always fed on the meat of earlier eras; all cultures do. From a medieval cathedral to an album by Mike Skinner, everything has influences rooted in an idea of the past. But there must surely be a gulf between a culture that builds on past influences to create something new and a culture that cannibalises past influences because it has run out of ideas; and then begins, as it seems we have begun, to cannibalise itself.

It’s hard to write this kind of thing without sounding like someone who thinks it was all better in his day. I grew up with Duran Duran and Kylie Minogue, so I harbour no illusions. And I’m being quite Brit-focused here; doubtless things are different in France and Canada. But I’d be willing to bet they aren’t that different. I don’t think this is just my imagination: it looks rather like the intellectual and moral exhaustion of the West is becoming ever more obvious in popular culture: which is, must be, the weathervane of wider society. We can’t say anything new, or even pretend to try. We have even lost the will to resist: the whole consumer apparatus of money and wanting has colonised everything, including the rebels. We are no longer a society of makers – we are a society of takers. Cultural pirates, living off the works of others, calling them our own, making money from money and art from art. Speaking to ourselves, turning in circles, swallowing our tails.

I wonder if others out there feel the same, and I wonder in particular what thoughts others have about the cultural moment we find ourselves in. What defines it? What has the 21st century brought us so far? If we are the Romans of the decadence, where next? What does culture mean in a dying empire?