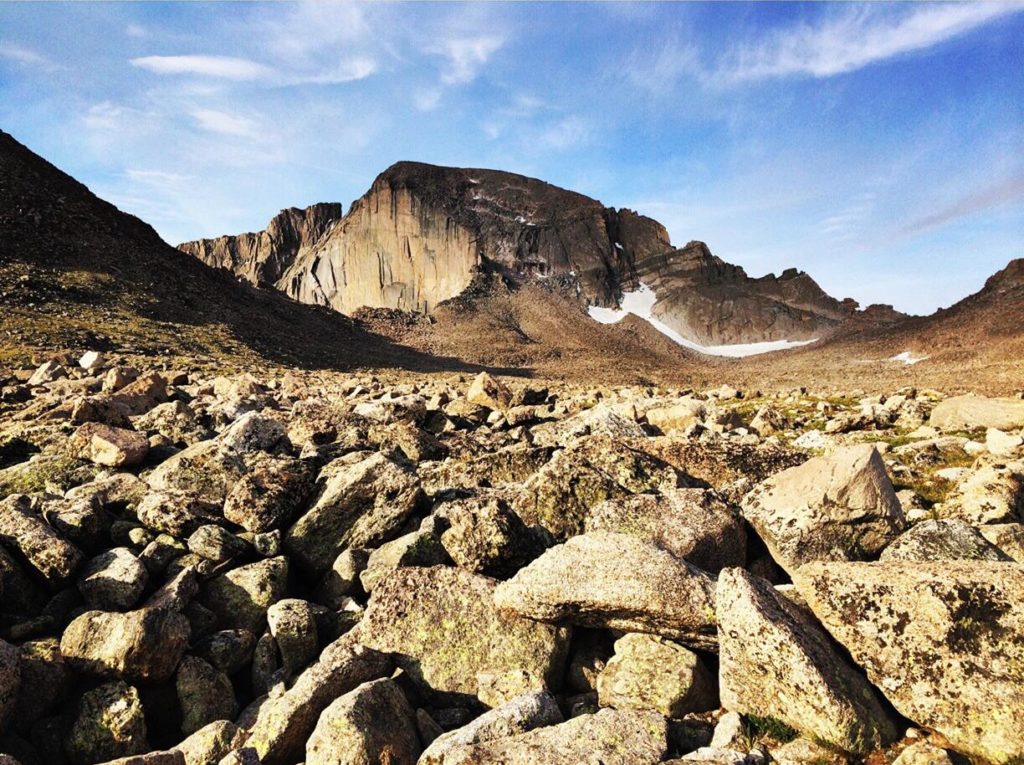 Longs Peak, Rocky Mountain National Park
Tyler Dunning
was born and raised in Montana and developed a feral curiosity at a young age. This disposition has led him around the world, to nearly all of the US national parks. He is currently working on a memoir entitled How We Reach for the Sun: A Field Guide to Losing Your Friends.
Share
Oh ye mythic landscapes of growing fame. Oh ye badlands of terrestrial divinity. You haunt me. You break my heart. I know this, for certain, because I’ve been attempting to read Terry Tempest Williams’ latest book, The Hour of Land – a proclaimed personal topography of America’s national parks – yet I get a few pages in and put in down. A few pages in, put it down. I can’t do it, as much as I admire the prose; as much as I cherish the content. It’s too painful – a haunt, a broken heart – because America’s national parks have become too personal to my own topography.

Six years ago I set the goal of visiting all the US national parks – a goal not borne out of a desire to become Instagram famous, or to sell feature articles to major magazines, or even to have a unique bragging right – but a goal generated by happenstance: I coincidentally found myself living on the border of Rocky Mountain National Park the same summer my best friend died in a terrorist attack in Kampala, Uganda (being there to visit friends while working for the same non-profit where we’d met). To cope with the loss, and my already compounding clinical depression, I withdrew, finding solace only across that national park boundary. I began going on hikes every free moment I had; began reading extensive books on the wilderness I now found myself within. Nature held the fundamental truths I needed to start reconstructing a dismantled psyche damaged by all the transgressions a civilised world permits: violations of civil, humanitarian, and environmental rights. And the more I learned about nature, the more I learned about myself.

To prove this, I made a drive down to Great Sand Dunes National Park in southern Colorado.

It was equally as stunning as Rocky Mountain National Park, yet unique in its own geological splendour. I needed to see more. So that fall I moved to California and began planning a new adventure for every weekend, filling my car with anyone curious enough to accompany me: Joshua Tree, Death Valley, Channel Islands, Saguaro.

I have since been to fifty-one of the fifty-nine US national parks, from the rainforests of American Samoa to the taiga of central Alaska.

In hindsight, my progression with the goal oddly mirrors the history of the park system itself. Initially, the national parks were proposed by dignitaries as an attempt to solidify our fledgling country’s sense of autonomous pride, because, at the time, we couldn’t compete with Europe in terms of architecture, or legacy, or the arts. But we had natural wonders without comparison – first seen at Niagara Falls, then the Yosemite Valley, then Yellowstone. We began building an identity around this.

I, too, was searching for a sense of pride. Or self-worth. And I felt this restlessness while traversing glacier-cut terrain or water-deplete deserts or volcanic depressions. I was re-learning how to identify myself.

Next came monumentalism, or this idea that we, as a country, only needed to protect the most indisputable of terrain: deep valleys, geothermal plateaus, massive trees. I, too, was first drawn to these parks of notoriety: I wanted to stand before El Capitan, I wanted to hug a sequoia, I wanted to dip my toes in Cater Lake. But this is only the honeymoon phase of becoming a naturalist: love starts with the obvious then cuts to the idiosyncratic.

An example: about sixty years after Yellowstone was established as the first national park in the world, the Everglades also joined that roster of federal designation. This was an interesting occasion because Everglades National Park was the first park protected for the primary purpose of environmentalism – for ecological preservation. And we see this as a shift away from monumentalism in the way that the Everglades’ watersheds were also considered for protection, from Big Cypress National Preserve up to Lake Okeechobee. A more holistic consideration was at work here: plots of land no longer needed a Teton-like range to turn congressional heads; a river of grass, in Southern Florida, could now demand similar respect.

I, too, began understanding that environmental consciousness meant more than just visiting the famous parks and pointing my camera lens at them. I began looking at all land differently: from wilderness areas created by the 1964 act, to national forests, to wildflowers across the Bridger Range of my backyard, to my mother’s garden.
Something more holistic was at work within me, too.

The national parks saved my life. I’m not saying this in a ‘these are the most pristine places on the planet’ sort of way. Or even in a ‘nature heals’ sort of way. They were just my target of attention at a time of need: a goal set during ultimate tribulation, giving myself arbitrary trajectory, which then gave me a reason to push through the existential darkness of a faith lost in humanity. It was submerging myself in nature, away from my fellow companions, that made me re-realise there is good in us, and hope, and unabated kindness.

This was my new lens to analyse the world through, finding logic that ran deeper than my mental illness, and yet, was so intimately intertwined within it—an individual ecosystem of sorts, everything contingent on the other.

So here I sit, Williams’ book at my side, containing 395 pages of stories that I want to read, yet, I’m reluctant. These parks are mine. I’ve wrapped my ego around them. Found salvation within them. And defend them like I would my own children. Still, funny enough, it’s hard to see someone else celebrate them. But that’s the ultimate beauty of public land: These parks are mine. They’re everyone else’s too. For whatever purpose – everyday or epic – that they need to serve.