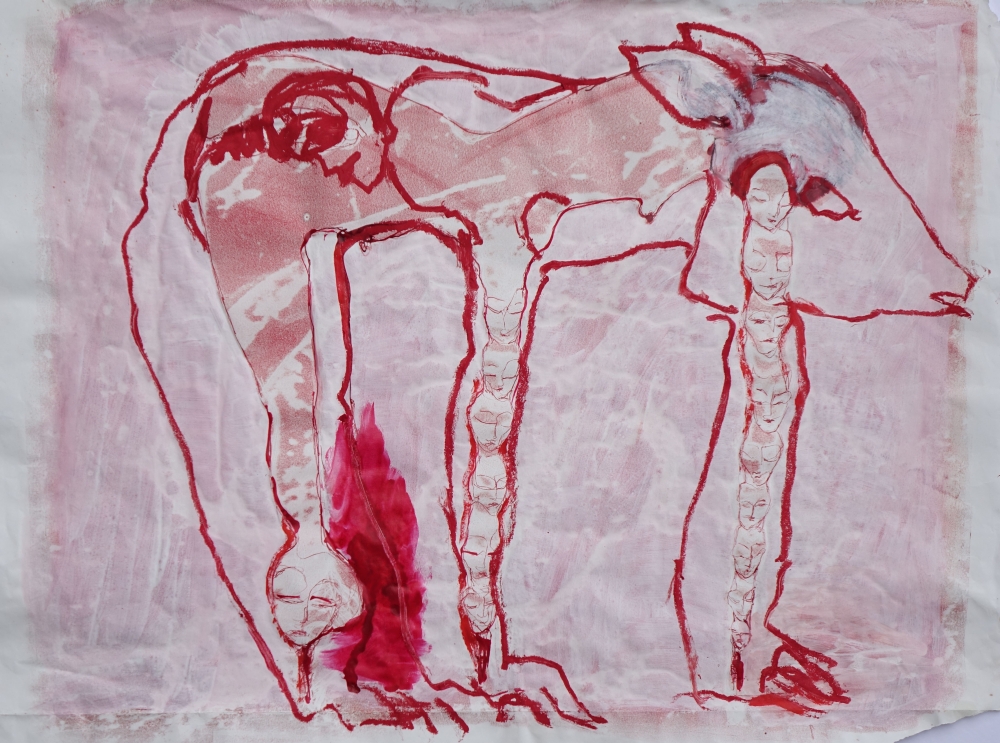 Creature Carrying Humans by Kate Walters (from Issue 10 - Unciviised Poetics)
Rob Carney
is the author of five books of poems, most recently The Book of Sharks and 88 Maps, which was named a finalist for the Washington State Book Award. In 2014 he received the Robinson Jeffers/Tor House Foundation Award for Poetry.
Share

The cousin of a shark is a manta ray;

and the cousin of a manta ray, a hawk;

and the cousin of a hawk is lightning, the ocean reborn,
returned skyward and alive with storm;

and the cousin of wind is erosion
leaving rock, the bones of the mountains, scattered;

and the cousin of the mountains is a row of teeth,
and another, and another behind;

and those teeth are the cousin of the manta ray,
lightning, the wind …

In a story seldom remembered, sharks were ghosts
guarding the afterlife

since their rendered bodies had no skeletons,
just teeth.

and widened the net of old omens,
but nobody knows. Those details

aren’t the details that lasted.
Only this: The dead

step out of their bodies, walk down
to the sea, swim out to the horizon.

For some, the passage is easy –
a day, a night, a warm current there to guide them.

For others, the journey goes on and on –
if they killed a bear, or left a wolf’s mate howling –

and the water is cold as a shark’s eyes.
And then they see the fins.

Under the first full moon of summer,
they would carry bowls of water,

the light reflected on the surface making more,
a procession of moons moving forward.

In the centre of town was a rowboat
being filled one bowl at a time,

and this was the boat of anyone lost at sea,
gone without a burial.

Those in mourning floated candles and petals.
There may have been music on flute or strings,

but we don’t know; it’s a ritual fallen away,
and all we have left are the wives’ tales.

They say their empty bowls filled with quieter sorrow,
and with memories of the dead to carry home.

They say the boat would be gone come sunrise,
just the anchor there,

still as a headstone
by others from the years before.

We have one such anchor on display in the museum,
arrangements of fishhooks,

even spears tipped long ago with sharks’ teeth,
and figure, That’s that,

think the past
fits into our pockets.

We wander about
then buy a bar-code souvenir.

But the past is more like the wind behind us,
and the present more like a ship,

and they’re wrong about the skeletons,
apart from the age of the bones,

bones buried deep but seated upright together,
all of them facing the sea –

so the ancient world believed in guardian spirits
watching over the living,

and a salmon was placed with the deceased
to keep the spirit fed.

Fish bones wrapped in deerskin
were discovered in every grave—

a plausible explanation, but it’s wrong.
The living were playing the part of angels,

guiding the dead to the edge of heaven,
seating them upright to find Forever in the waves.

But what about the salmon?
Well, that’s counterclockwise too:

The salmon were meant as an offering,
a present for the sharks,

a thank-you for taking our spirits
into their home.

and all you get is a set of jaws and teeth,
some fragment to hang in a window

or look at over the fireplace
instead of at the fire.

Not to keep old scrolls from rolling up,
or pages in place while they bind them,

but to bear in mind
we aren’t the measure of Creation. Just a part.

The edge of the sea is a teacher –
so many bones:

all the shells and the sand dollars,
all the barnacles encrusted on the pier,

even wood –
it used to stand upright in forests –

even ash left behind in our fire pits
dug to keep warm, to boil water

and empty our crab pots …
even steam rising up like the spirit of rivers,

joining clouds that drift above our graveyards,
and higher still

the moon keeps sailing through its phases,
all of them the colour of bone.

During last winter I spent six weeks working on the Isle of Iona. The Bhagavad Gita was a constant companion, as were Rilke’s ‘Duino Elegies’. I was particularly inspired by what Rilke explores in the ‘Eighth Elegy’: animals always being in the womb of creation. In this picture the Creature carries us all, in all our stages of imperfection.

Kate Walters studied Fine Art in London, Brighton and Falmouth. She has exhibited in Jerwood Drawing and in many other national selected exhibitions and has taken part in several residencies, including the Isle of Iona (2015 – 6), the RCA (National Open Art Resident artist) and in 2017, the Isle of Shetland. Interested in sharing the phenomena which illuminate and inspire her, she’s given presentations at many UK and European Universities. As a curator, Kate recently brought together a group of artists working with the feminine paradigm called Drawing down the Feminine. Her work is inspired by many poets, especially Rilke, Raine, Mallarme and the raw physical poems of First Nations peoples. katewalters.co.uk

You’ll find more where that came from in our latest book.
Tags
Reply