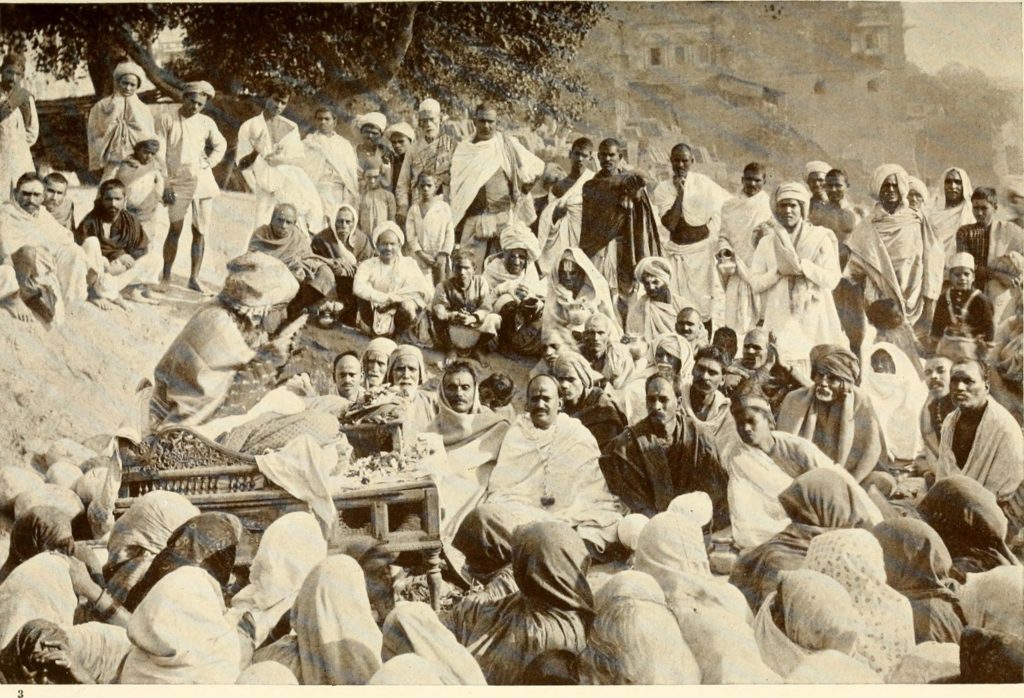 Indian Kathakar Storyteller 1913, Wikimedia Commons.
Shiba Desor
Shiba Desor is a member of Kalpavriksh, an environmental group based in Pune. She is part environmental researcher, part organiser of gatherings, part food-writer. She has co-authored a children’s book on food called Something To Chew On.
Share
Once upon a time, in the mountains of the Himalayas, when an old man was about to die, he beckoned his son to come closer. As the son drew near, the old man whispered, ‘son, I have only one piece of advice for you, sweeten your madua before you eat it’. Soonafter the man passed away, leaving the son slightly confused with his last message. Trying to follow the instructions, the son tried to eat madua with different sweet additions like gud, honey and sugar. Years went by and the son forgot about his father’s curious message. One day he went to the forest to collect firewood. He worked hard and by the time his chores were over, it was evening and he was very tired and hungry. He realised that he had brought along a few stale madua rotis tied in a cloth. With relief and gratitude, he opened the cloth and started eating the rotis. He was stunned. For never had madua tasted sweeter, taking him back to the words of his dying father. Now he finally understood what the old man had been trying to tell him. To really be able to taste the sweetness in your food, you need to be really hungry. To be really hungry, you need to have really worked.

Hirma Devi Sumtiyal, who is known to many in the village Sarmoli in Munsiari as Thul-Aam or ‘Elder mother’, told me this story. But she had not made it up. She had heard it during one of the countless Aan Katha sessions. Aan Katha sessions, where often the elders teased and challenged the younger people with riddles and puzzle-stories, would start in the evening on snowy winter days and continue late into the night. Or they used to. In the present age of ubiquitous televisions and smart-phones, families and societies have found other ways of entertaining and educating themselves.

All corners of India reverbrate with different forms of storytelling, orally passing tales from one generation to another from time immemorial. There is a richness in their diversity of form (which may be songs, couplets, riddles or long prose) and content (romantic, funny, sad, practical, simply amusing, adventurous or even propagandist). In my own homeland of Punjab, my mother recollects summer nights of storytelling by her parents and grandparents, which was done only when the children promised to give a hungaara i.e. say ‘hmmm’ at regular intervals to indicate that they are listening.

Stories have always had an important place in human history. According to Yuval Noah Harari, author of the book Sapiens, ‘Any large scale human cooperation – whether a modern state, a medieval church, an ancient city or an archaic tribe – is rooted in common myths that exist only in people’s collective imagination’. According to Harari religion, nationalism, and even belief in justice and human rights, are all on account of our ability to believe in fiction. Following his logic, it seems that in some ways wars, invasions, conversions, even political elections, are actually about a clash of stories – who can weave the most captivating, enthralling, bewitching tale that would make us want to believe in them.

In the meetha madua story that I began with, the food will be tastier if you have worked, making work as a reward unto itself. In that way, stories reflect how we rationalise life to ourselves. Stories can also reflect our value systems. In another mountain village, in Ladakh, I was told that people feel obliged to welcome wayfarers into their house and offer them shelter for the night. ‘Hospitality is a way of life. If a person is too possesive about their house, they will become a tortoise in their next life. Because a tortoise carries its house upon its back,’ said Tsering Angmo of Gangles village.

Stories can reveal to us connections. For instance, in the creation story of Santals, an indigenous people of India, the Earth rests on a tortoise. Oceans apart, in the North American story of Anishinaabeg, a turtle volunteers to have the Earth placed on its back. Such similarities could indicate either common origins of the tribe, or commonalities in the historic incidences that were recorded in form of story. In fact, there are many who assert that myths are a method of storing memories. It is said that Aboriginal Australian storytelling records sea-level rise taking place between 7,000 and 18,000 years ago. That story was passed orally to the present over 300 generations of people.

Stories can also be just about wit and pleasure. For instance the paradoxical one-lined story that grandmothers in villages of Maharashtra tell their grandchildren mischieviously when they are nagging them for a story – ‘Once upon a time, there was an old lady who died when she was a child’.

But it seems like in our present times, we are losing systems that wove and passed on these stories, and even the tongues that held them. In the last five decades, over 220 languages have gone extinct from India. In Australia more than 100 Aboriginal languages have died since white settlement and 75% of the remaining are critically endangered. I know that many people would say that it is an acceptable loss, an inevitable part of ‘evolution’.

But in our hearts surely we understand enough about ecology to realise the flaw in that argument. For isn’t there a link between the forces endangering wildlife and our environment, and the forces threatening our diversity of cultures and languages? At the root of both is perhaps our rush towards economic growth and development, fast transforming and redefining our ‘needs’, social networks, landscapes, and livelihoods. Our coping mechanism to this unprecedented pace of change has been to take refuge in homogenity and conformity, to let our folk stories echo in their own silences. In a kitchen colonised with wheat and rice, in an evening now colonised with television’s blaring noises, what happens to the likes of Hirma Devi, holding on to not just the aan kathas but also her small cloth bags filled with madua and old spices?

Imagine stories that have survived for centuries being lost in a generation or two. In many communities, what we retain at present is just the left-over warmth of embers of a flame already spent. Just fragments of stories, strings of words, holding fading memories slowly ebbing away to oblivion as bridges of communication between one generation and the next burn off to ground. It is a spiral of losses, losses of not just words, phrases, stories, languages but losses of ways of being, ways of thinking, ways of expressing, ways of knowing, ways of making sense of the world. In a world where there is no space left for diversity, we will be stripped of our most elemental tools. Will we be able to feel whole as persons, or will our sense of incompleteness intensify, taking with us everywhere we go a nagging feeling at the back of our mind that we are part of an incomplete jigsaw, that we are witnesses to an unfinished sky? Or perhaps, we will return from this juncture of loss, our need for stories and our need for diversity getting the better of us. Perhaps we will pick up what remains of the old and refashion it to make new stories for our time, taking once more the effort to look up, look around, look within, and converse. If someone was to study us a hundred or a thousand years from now, what would they say were the defining myths of this century? How are our stories evolving? What are our beliefs?

I am not romanticising the idea of stories. I know that like most other mediums, stories can be used by the powerful against the weak, to perpetuate victimisation. Yet the capacity of evil does not make the medium and the entirety of its content evil. I feel that in a land of diversity of cultures and landscapes, there is much wisdom and truth for us to learn from these oral mediums that were localised yet widespread, captivating imaginations and inspiring the passing on of strings of words over hundreds of generations. Getting a deeper understanding of our possible pasts may help us think of different, perhaps even better, possibilities for a future.

A Honeybee Heart Has Five Openings

Helen Jukes
An extract from Helen Jukes' new book about her journey to becoming an urban beekeeper.
Other Kingdoms 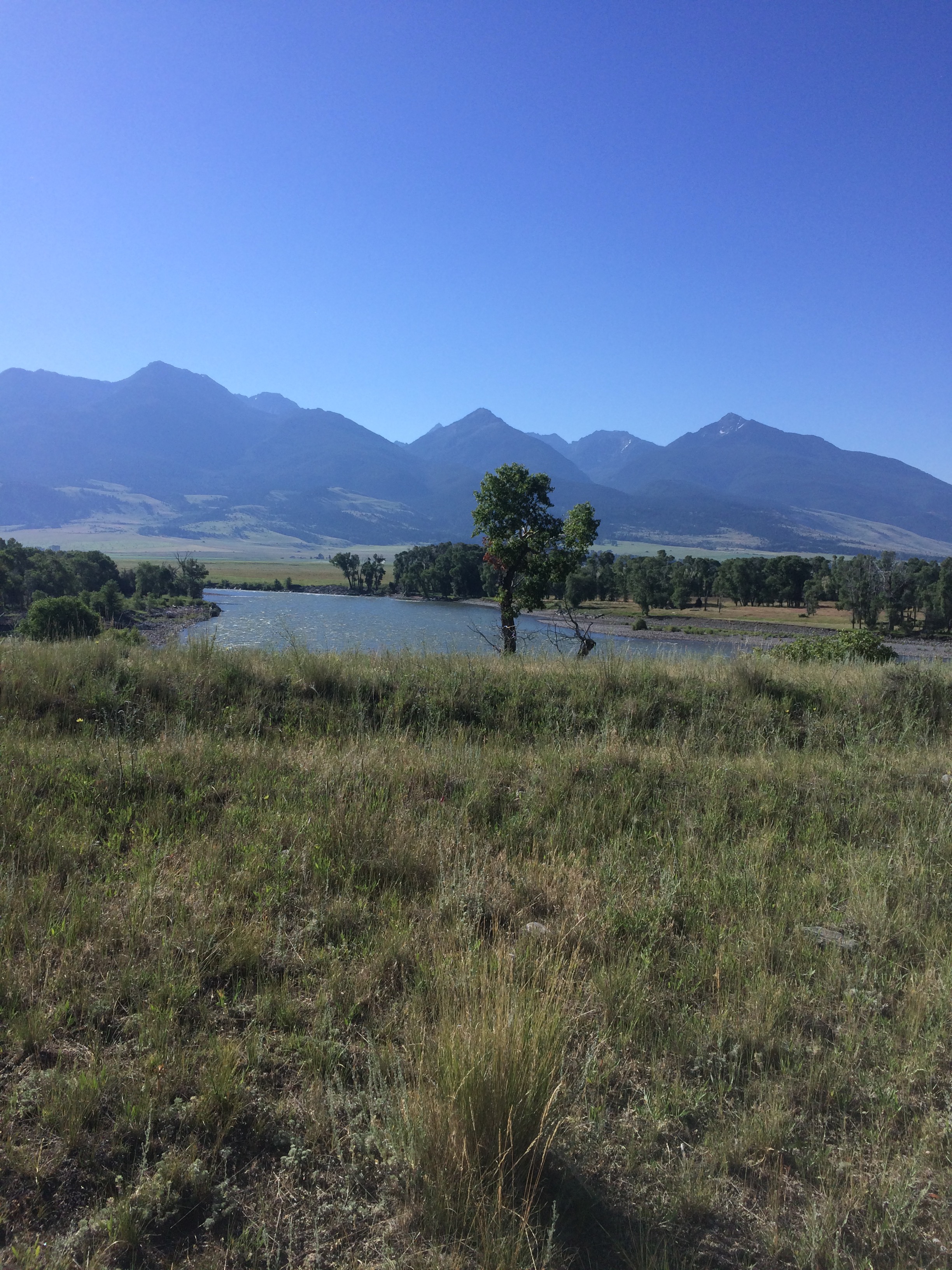 Blood on My Hands 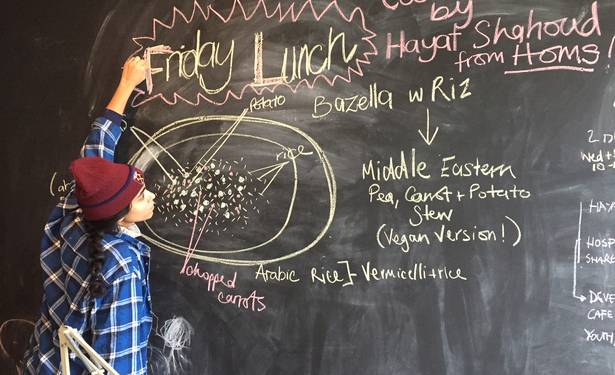 A Recipe for Belonging

Olga Bloemen and Amabel Crowe
One of the villagers can’t resist and ventures out of her house to ask what...
Dark Kitchen