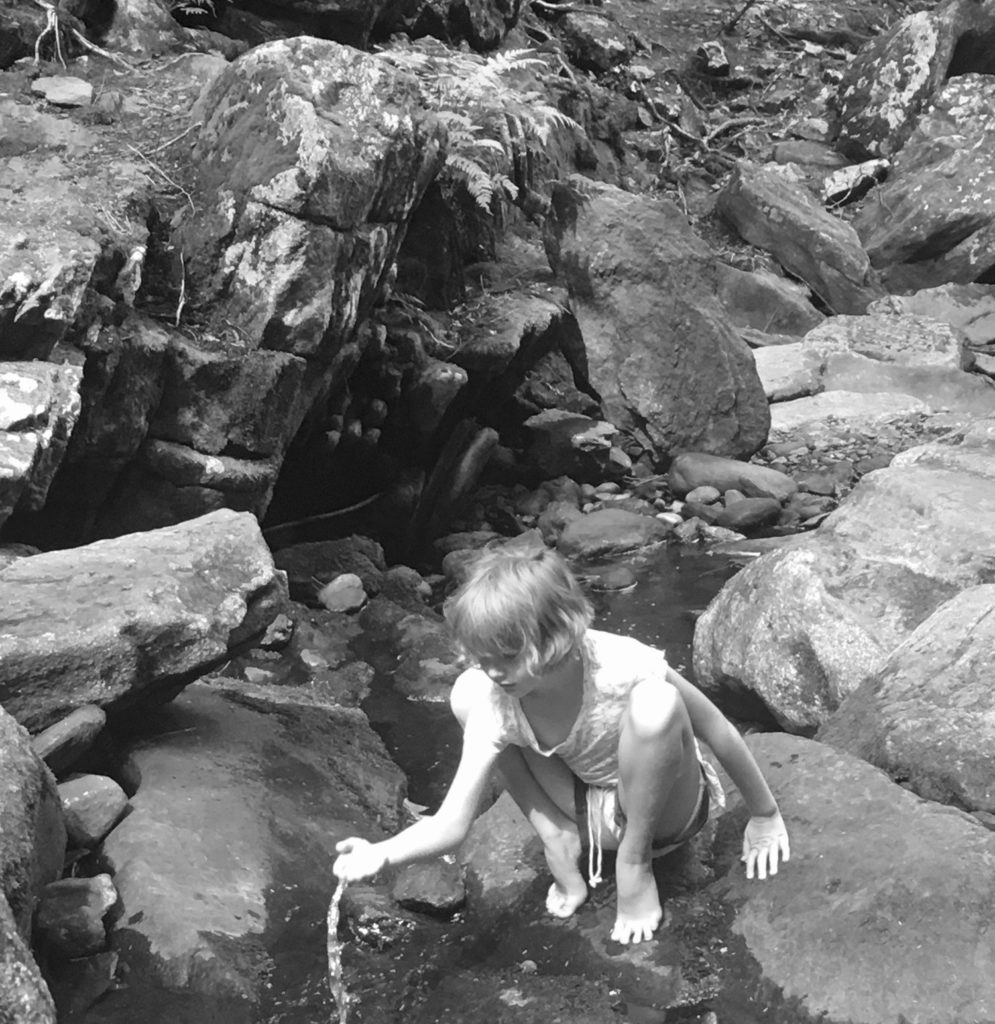 Mike Freeman
Mike Freeman is a full-time parent in New England (USA) and the author of the memoir Neither Mountain Nor River and Drifting: Two Weeks On the Hudson , a river narrative exploring the cultural and ecological frictions currently causing global unrest.
Share
No need to rush. The sun wouldn’t set for a few hours and the farmers never mind how late we stay. It’s a Historic New England property, part of a constellation striving to do what we all do to varying degrees – embalm heavily-curated visions of the past. This farm has been operating on Narragansett Bay’s Conanicut Island since just after the Revolution, and today’s stewards tend sheep and cows roughly in line with that original family, internal combustion aside. Three days a week the public can wander all two-hundred some acres, most of it outcrop-spattered pasture running down to the bay. Our daughters adore it, as do we.

Shannon was five now, tall, still so wildly autistic that Karen and I ended a recent midnight conversation the only honest way we could:

‘It’s like we’ve healed a crippled wolverine,’ I said, ‘and are just waiting to see if she’ll stay.’

Anyone listening would have taken that as I would have with an outsider’s ear, but from the inside it only plunged our affections deeper. Beyond swimming we weren’t sure if we’d taught Shannon a thing, but for us she’d been a fountainhead.

Having sat on the sun-warmed stones, she was naked now, pitching shale nits to an ebbed tide. Here or elsewhere it wasn’t the first time I’d forgotten dry clothes, and when we reached the shore a half mile from the farmhouse I’d simply stripped her. At the very least, I knew, she’d wade, but with the windless day making the bay more lake than ocean she went right in, paddling up top and below, rubbing salt-soaked eyes. Once out, I sat a few yards behind her with the brine evaporating off each of us and a brace of herring gulls drifting close. Eyeing what she threw, they lilted out front like decoys before a blind.

It can’t be helped. People romanticise. We do it to everything. Past, present, future. Baseball, warfare, nationhood, love. Everything. This farm testifies to that penchant, our gift for breeding nostalgia with the future’s equally idyllic numina, all to heal a present in which we never seem settled. No matter how peaceful the age, no matter how self-satisfied the generation, a hunch shadows the human experience that in this moment – now, right now, across the world – a spiritual rot oozes from our failing morality. If we could only regain the past’s simplicity along with its accompanying rectitude we’d secure our children a spotless future.

I’m as susceptible as the rest. In witnessing the farmers’ earthy work here I succumb, envisioning what might be if we dropped it all for those scythes and shears. There aren’t many mechanical sounds on the acreage, just the occasional tractor huff outdoing the murmuring livestock, the katydids and orioles, the bobolink bustle over the hay. Whatever success, however, in preserving the past is equally attributable to absence – the sights and sounds memory purges. Slavery once poxed these islands, while the ships feeding it departed the bay in fleets, and if any one place could have tilted Native fate another way it’s Narragansett’s southern shores, where three-and-a-half centuries ago two blood-choked years fixed that compass.

Reflection, too, scrubs away life’s lesser dramas, those affecting us from the beginning. In imagining the farmers who worked this land, we only see their honest toil, not the attendant spectrum of untoward behaviour – the back-biting, the infidelities, the petty-intrigues, human life’s everyday grime. Homage, then, is quite a detergent, particularly when projected onto the coming age.

Children, of course, we romanticise most of all. Kids carnalise hope, spawning vision. At a glance Shan might squelch such dreamwork, but in time her primitive core radiates clarity.

As she does, she stood abruptly. She may have seen all she needed of splash patterns. The sun may have been too much, or the naval transport planes – groaning a few thousand feet above, performing near daily manoeuvres – might have finally disrupted her. Regardless, she erected herself, striding knee-deep back to the sea, putting one gull to sloppy-footed flight while the rest edged away. The flier turned, cupping a tight circle overhead, eliciting from Shan a delighted peel.

‘Bird,’ I said. ‘Bird,’ but if she understood or even heard there was no indication.

Wracked by a recent storm, knots of eel grass drew her next and she sloshed ashore, gathering a gnarled ball. Burying her face, she breathed deep then licked a green, ribbon-like blade. The assessment complete, she stepped forward, vaulting the grass ocean-ward, re-piquing the gulls. Whatever bacteria she picks up from such explorations doesn’t bother me, but I’ll never shake other worries. This bay, after all, birthed America’s industrial might, pumping in its heavy-metal postpartum across two centuries.

Toe-walking toward the woodline, Shannon stepped from rock to rock now, wind-milling her arms and torqueing her body as anyone with vestibular equilibrium wouldn’t. She looks like a courting crane at such times, but somehow rarely falls. The low tide had left pockets of aired-out blue mussels. Squatting, she plucked one like a mushroom, pressing it to her nostrils then slipping the oblong capsule in her mouth, swishing it from cheek to cheek before spitting. Out front, mid-bay, an inbound oil tanker cut toward Providence, the heavy August sun lighting blue water all around.

I stood, gathering Shannon’s clothes, her diaper, then followed. She’d gained the wooded trailhead, rooting around in last year’s leaves. Fondling an early walnut drop, she thumbed the green hull before tossing it, next making her naked way to pasture’s edge. Locked in forested shadow, I forgot how helpless my daughter really is, and as she fingered sun-plumped blackberries I let go. Somewhere, I thought, the Bible maybe, or deeper, down in our intuitive substrate, it must say ‘And a child did lead them.’ It must. From the canopy the season’s first cicada let loose its metallic whirr. Summer didn’t have long to go.