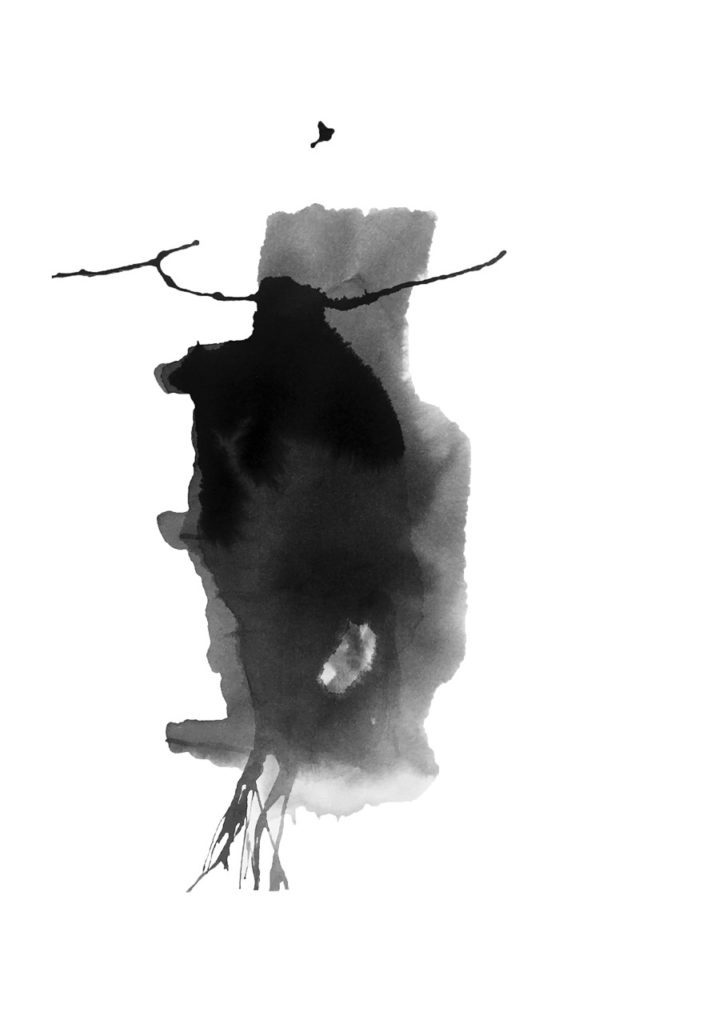 A Bird Flies oOt of ta fForest by Rober Byggtt
T. M. Delaney
was born in Yorkshire and grew up in Scotland. He studied English and Philosophy at Glasgow University and has worked as a teacher and as a council officer. He lives in the Orkney Islands with his family.
Share
It was never very hot on the island. Every day we heard stories coming from the south: broken records, sleepless nights, heath fires. Things melting that should not melt.

We’d heard it all before of course. It did not touch us. It was true that the sun shone every day.

But it was never very hot.

We built the pond at the end of March one year, on days when the temperature reached 21°C. Three days labouring in a winter heat that seemed in excess of what was normal in an island summer. It was like finding a wallet stuffed with fivers and keeping it. You knew it was wrong, but you enjoyed it all the same.

The pond was about fifteen feet wide, but less than three feet deep at its centre. It was shallow at the edges, sloped gently down, and then dropped a couple of feet near the middle.
We built a pebble beach at one end so that any animal that wanted to use the pond could get in and out easily.

We were hoping for frogs.

It was astonishing how quickly the pond filled up with life. Friends brought us a bucket of tadpoles from their own bountiful pond, but life needed little in the way of assistance; various bugs and molluscs seemed to spontaneously materialise in the water before summer was out.

We would creep out quietly and stand and stare, happily baffled by the coming of the endless carnival of pond life.

It was not unexpected, of course, but the morning we found a pandemonium of froglets – here, there and everywhere in the grass by the pond – was a time of jubilation.

‘Be careful,’ we whispered to one another. Watch where you step!

By the morning of the next day they were mostly gone, a few stragglers popping up now and then to make us still wary of where we put our feet.

‘Next year!’ we thought. ‘Next year there will be millions!’

A little fist-sized lump of frogspawn was all we ever saw the following spring. Later, if we stood and watched for a while, we might see the odd tadpole steering waggily past a frond of weed. We would keep it in view for as long as we could before it disappeared at the far side of the pond.

To be frank, we were a little disappointed.

When the same thing happened the following year we knew that something must be done. We needed to give nature a little shove.

We needed to manage the situation.

It stopped raining some time in early May.

But weeks before that we’d acted; brought buckets full of spotted gunk from someone’s wild pond that nestled in a dip at the bottom of their damp field. We waded in up to our knees and hoicked the stuff in great scoops-full out of the murky water and into pails; then we drove home carefully, so that none of our precious cargo would slop uselessly out on to the car floor.

Now there were masses of the stuff in our pond.

It still wasn’t raining, and it took a little while, but a few weeks later there were cute little tadpoles undulating busily in all quarters of our crowded pond.

We stood by the water fascinated, noting the minutiae of tadpole behaviour, how groups seemed to come into the shallow part of the pond where the water was warmest and rest there, hardly moving at all under the warm sun, almost as if they were sunbathing. Not far from these sunbathers a group clustered round the shell of a dead snail, heads fixed on the flesh of the animal, tails thrashing, like a riot of sharks in a feeding frenzy.

We looked at one another and smiled.

‘It’s so nice to have a dry spell,’ we said, looking up at the clear blue sky.

There are grass fires every year on the island. It does not need to be hot. A piece of glass distils the light of a mediocre sun to a fine point of heat and some tiny scrap of dried-out vegetation begins to smoulder. Small flames advance slowly across the grass like a line of cattle feeding; they mostly fade and quickly die. Now and then they find some stamina and persist until the firemen come and beat them to a standstill.

There are summers when a kind of alopecia afflicts the green and brown and yellow pattern of island vegetation: intermittent bald patches, black and irregular, scar the landscape. But not this summer. The sun shone steadily, but there were no fires. Or at least, looking out from our garden at the fields and hills all around, we saw no fires. The sun shone, but on the island it seemed that nothing burned.

At night we watched the wildfire on Saddleworth Moor on the television and wondered.

Who had done this thing?

By the beginning of June the water had started to retreat from the edge of the pond. It exposed the ugly black butyl liner, which soon became a slowly expanding borderland between the green of the garden and the water.

The tadpoles still sunbathed in the shallows close to the water’s edge. There seemed to be even more of them now. We looked forward to the day the grass would come alive with leaping froglets: frog graduation day.

The water retreated slowly day-by-day and the tadpoles fattened.

The sun shone and there was no rain.

We began to look for signs of transformation. Sometimes we thought we saw nubs of little frog legs at the base of a body, bulging just a little on either side of a tail. We would go back the next day hoping for elongation, for definite signs of development. But days went by and the tadpoles were still tadpoles, happily wending their way around the diminishing pond.

The water was still retreating but there was a lot of it. The tadpoles had all the water they needed. They were happy tadpoles.

We had done this.

They were happy tadpoles.

We didn’t like to ask out loud but we were beginning to wonder. The black margin at the pond’s edge was now three feet wide. The tadpoles swam and swam and were not harmed, but the nubs did not elongate, the bodies did not change shape, no legs came.

We didn’t like to ask out loud but we both began to wonder. How much longer?

It was not just, we knew, but we were beginning to get annoyed with our tadpoles. (Our tadpoles – they were definitely our tadpoles now). It seemed that they were in no hurry to grow up and leave their natal home. Sometimes – once or twice perhaps – we stood and chided them. ‘You need to hurry,’ we said. You need to hurry the fuck up!

When the first pairs of proper legs appeared it came as something of a relief, and when teardrop bodies began to transform our confidence began to grow. (‘Look, it’s changing isn’t it?’ we asked each other tentatively.)

The water was receding every day. It was receding very quickly. The rapidity of its retreat was alarming. By the time the pond had shrunk to half its original size the tadpoles were no longer sunbathing.

We didn’t like to say, but we both knew what the other was thinking.

We were wondering if there were fewer of them now.

It was happening at night, we told ourselves. The advanced tadpoles, the vanguard, were completing their transition in the dark, hopping across the black expanse of bare butyl, across the grass and into the overgrowth. They were sheltering there now, out of the glare of the sun.

They had matured. They were sensible little froglets.

There were fewer of them, we were certain, but there was no need to worry.

The sun shone every day. ‘What a great summer,’ we told ourselves. The grass was dying, leaving a web of bleached-out scurf all over the hard ground. The pond retreated into the centre where it dropped down and the water was at its deepest. It was thick with weed there, and hard to see the tadpoles, but they were in there, we knew. We thought we knew.

They were in among the weed, growing legs, losing tails, changing into peppy little froglets, fizzing with adventure. They would be out of the water and all over the grass any day now, popping up and down like mustard seeds toasting in a frying pan.

And since the grass was dying, we told ourselves, they would be easier to see.

In the fields next to the house the barley had begun to ripen. ‘A month early,’ we said, pleased with our knowledge of the usual.

In the pond we scarcely saw a tadpole now, although if we stood for a while we might catch sight of one or even two together. Some of them had legs. They swam on the spot at the edge of the weeds facing outwards to the land beyond the butyl liner. No more than an inch from the edge, moving all the time, making no progress, swimming on the spot.

We began to worry, although we did not utter the thought out loud, that our tadpoles, who we’d gone out of our way to invite into our garden, who, we’d hoped, would share our lives and live and reproduce and stay with us for evermore, might not persist.

We wondered if our hospitality had been in vain.

We wondered if it was something that we’d done.

Image;  A Bird Flies Out of a Forest by Roger Bygott
Ink drawing

A spontaneous ink drawing emerging from the unconscious. It captures a moment of shadows shifting, a crack in the undergrowth, a brief panic of power and fragility, a fleeting drama of birds and beasts.

Roger Bygott is an interdisciplinary artist, dancer and writer based at Suite Studios in Salford. He looks for charge in the body, energy in the urban landscape, play in process, and delight in embodied expression. He is a director of Manifest Art Festival in Manchester. 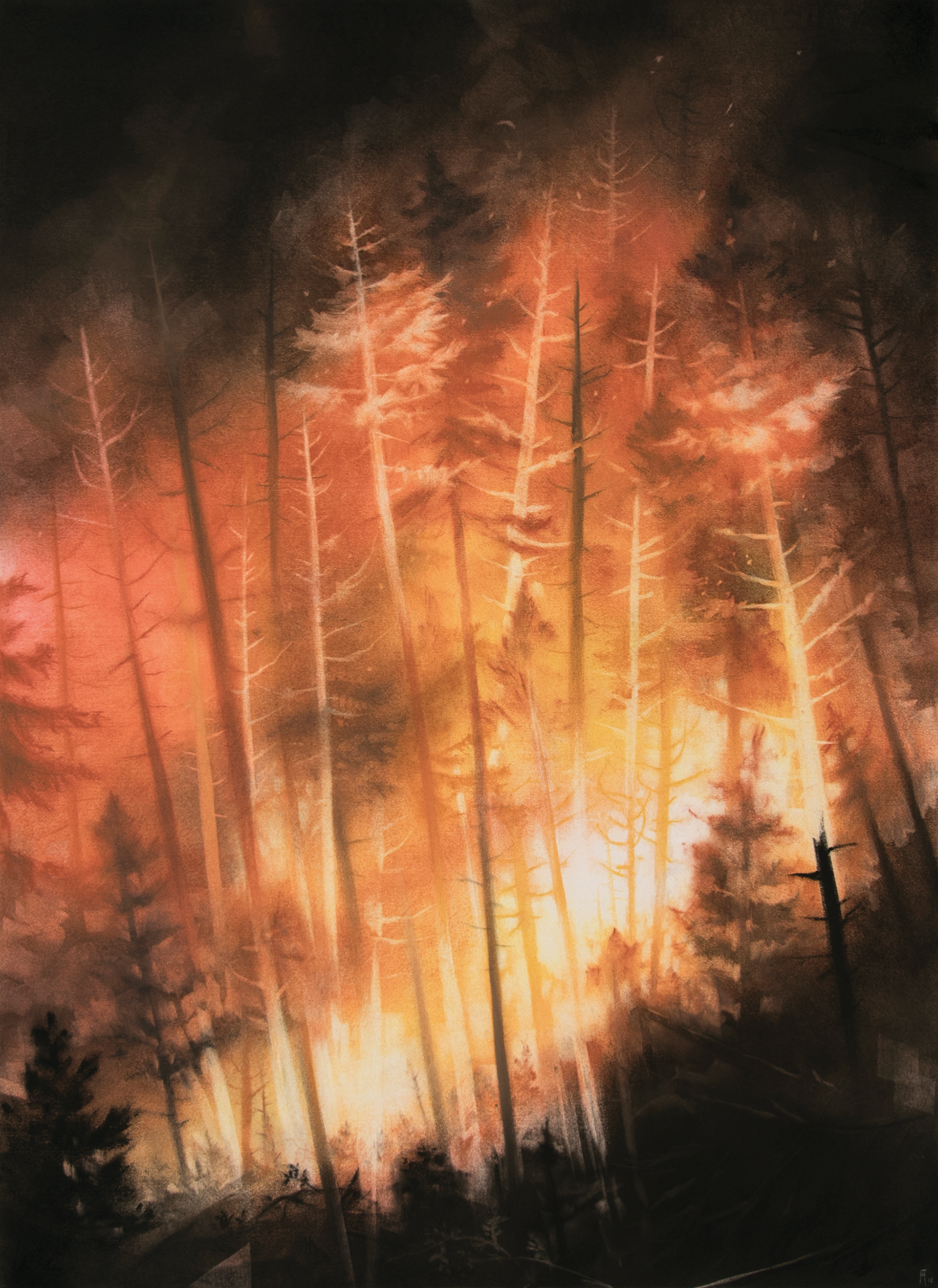 Do Not Worship the Deities That Came Before the Fire

Arnold Schroder
From Our BooksIssue 15 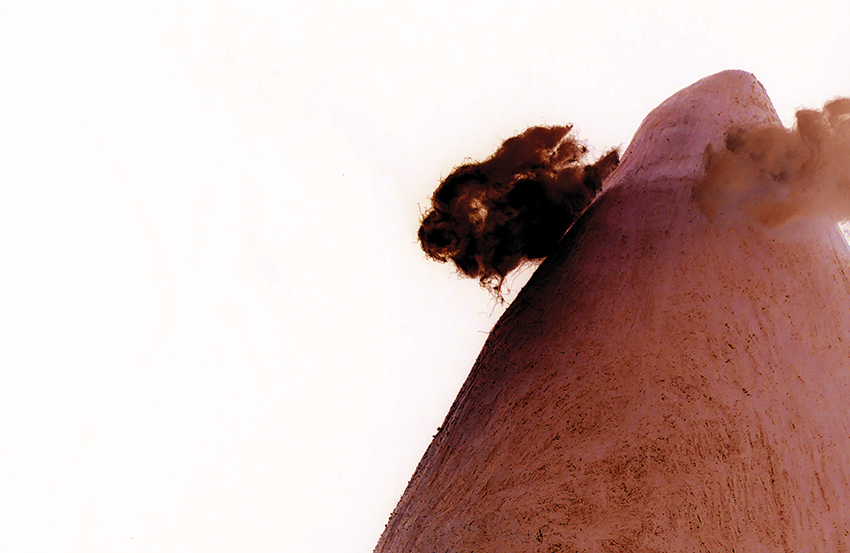 A Letter from Death Valley, an Elegy from the Future