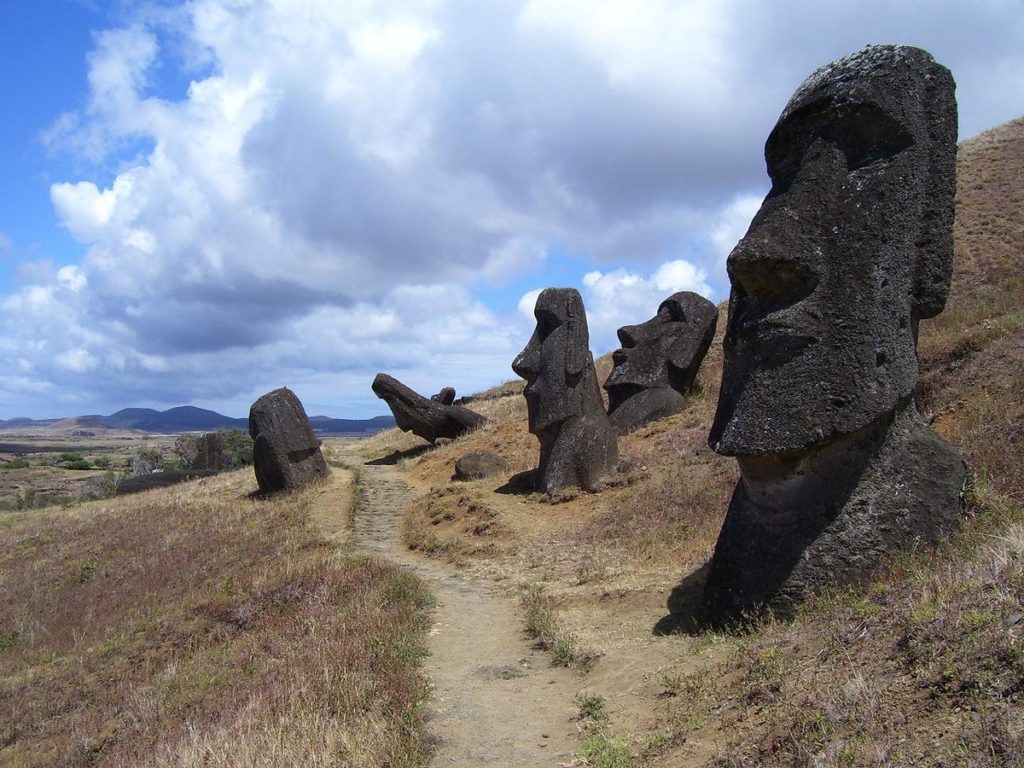 Easter Island Moai (photo: Horacio Fernandez - Wikipedia Commons)
Brian George
is the author of two books of essays and five books of poetry. His book of essays Masks of Origin: Regression in the Service of Omnipotence has just been published by Untimely Books. He is a graduate of the Massachusetts College of Art, an exhibited artist and former teacher. He often tells people first discovering his work that his goal is not so much to be read as to be reread, and then lived with.
Share

Octopus Grounds: The Half-Life of the City

Cesium 137 spreads through the Pacific. A fugue of luminous mist is drawn up from the ocean. It cycles, then returns. How lucky we are that the east is separate from the west. I continue with my preparations to learn to function without breathing. Many objects now lack substance. A slight resistance  – only  – now keeps me from passing through them. The sphere sent to reorient my vision is no bigger than the top joint of a thumb. When it flickers, I blow out.

At 2:00 am, on a Boston rooftop, I brood upon the dark arts that have set us up for destruction. How opaque are their practitioners’ motives! How subtle are the effects! No smoke puffs from the stacks of the now abandoned factories. The clouds are the wrong colour. Their homing signals gone haywire, birds drop from the sky. Like the future pulsing backwards, the skeleton of the Prudential Tower steps out of its skin. It is a dream that is able to take X-rays of itself. My bottle of Poland Spring water glows. Everywhere, there are signs that inform us of our actions. This ensures that we will say, ‘Who knew?’

A bunker stocked with drums of radioactive waste will not be subject to the laws of chance. It will not be disturbed by the drift of continental plates. A computer simulation has assured us that no leakage will occur, at least for the next 50,000 years. That top experts do not see what should be obvious to a child is certainly quite peculiar. That they do see something spun from mist as solid is even more peculiar

At Fukushima Dai-Ichi, at the centre of the meltdown, readings of 530 seiverts per hour have been recorded. One seivert is enough to cause radiation sickness, and even robots can drop dead in 30 minutes. The Japanese government therefore has announced that it is safe for local residents to return. It is hard to believe that, in the 1960s, GE’s engineers could not guess there might be earthquakes in an earthquake zone, or that a series of reactors should probably not be built on a fault-line, especially when the chance of a tsunami was close to 100 per cent. It is not as if, from the 14th to 18th centuries, no warnings had been left by various traumatised survivors. One marker reads, ‘Do not build below this point’. They had named one town ‘Octopus Grounds’.

An octopus will judge the culture that I left. Did the gods eat us, or did we eat our gods? There is a curse that sucks the memory from the bones of its consumer. I have stamped my fossil on the desert of the real. Were it not for the sound of my heart, I would have no way to locate the city underneath me. No fear obscures the light that sweeps me into space.

If we desire to reset the parameters of our vision, it will be necessary to begin at the beginning, like those long-eared poets who lifted up dead cities with their words. Being silent, they could hear. Being desperate, they could laugh. Being present, they could trace the labyrinthine path that they had mapped out in past worlds. Crossing from one residual landmass to the next, between those few peaks that still poked above black waters, those seers joined hands to call the sun out of the deep. What they were taught to do, they did. They caused lost cultures to coagulate beneath them. Their hearts weighed almost nothing—a bit more, a bit less.  Their eyes were wide. They did not hesitate to kill.

Even now, the long-eared poets play games with the sky. Even now, you can hear the rhythm of their oars, the drone of their chant, the slap of their feet as they dance upon black waters. Even now, they return to the clear shores of their youth. Curled like foetuses and covered with red ochre, even now, those poets breathe. Their whispers re-inflate the lung-sacs of the globe. Their hands still clutch the gifts that they take to the beyond.

Like our guides, we must not only find a way to begin at the beginning, we must find some way to determine just what a ‘beginning’ is

Even now, those seers stare into the sun, in their hands the cylinders that hold the eggs of slaughtered species, in their hands the knives that cut the throats of foreign gods. Like our guides, we must not only find a way to begin at the beginning, we must find some way to determine just what a ‘beginning’ is.

The world is almost infinitely complex, as is time, and human nature, but we should start by drawing a circle on the ground. We should lift our hands at the centre of a turning ten-dimensional torus, which can be statistically re-normalised as a circle no more than ten feet wide. There, we will begin our invocation. There, we will test the first steps of our dance. There, we will reach for the others in our circle, for those present and not present, for those whose phones have no signal, for those who live in cities where the streetlights have gone off. We should start there, in this circle, and not elsewhere, for there is no other place. This circle will be powered by our breath, and its centripetal vortex will then gather up what it needs.

Back home, there will be few remaining traces that there ever was a circle. A new sun will have long since bubbled from the depths. We will find, should we return, that our bio-energetic vehicles have been transformed into stones. At first worshipped by the masses, they will later come to be seen as normal parts of the environment. In passing, we will note that a day takes 24,000 years. Hieroglyphs will buzz in geometric networks. In our reconfigured forms, we will take what we require, no more and no less. We will improvise as we go.