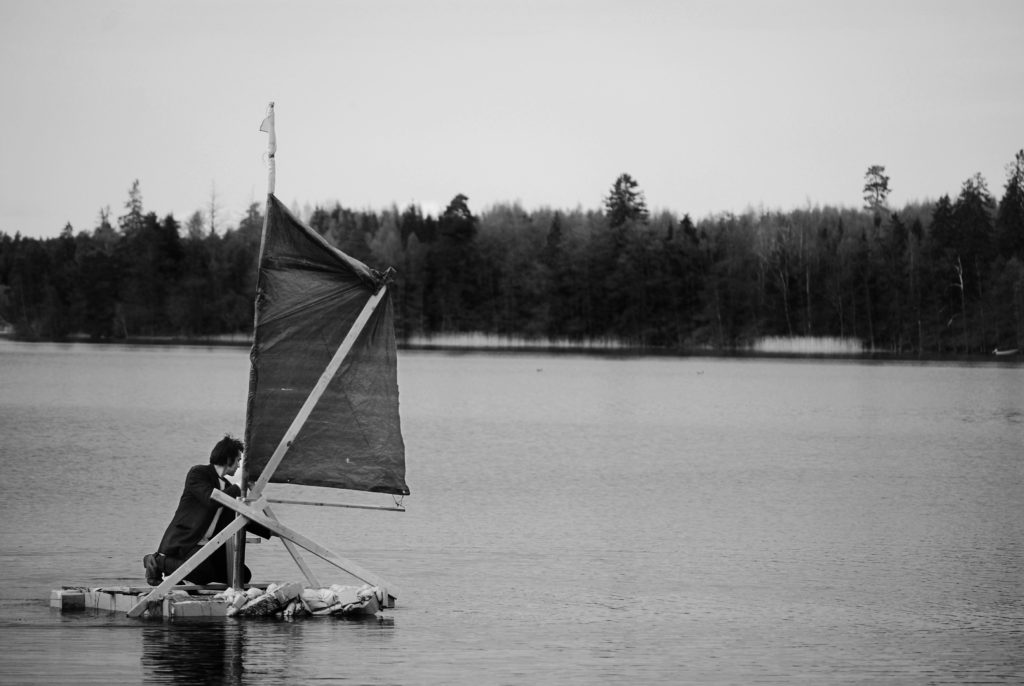 Patrik Qvist
is a visual artist working in a variety of media – performance, photography and text-based installations, currently residing in the south of Sweden. His durational pieces are performed outdoors where the setting determines the length of each performance. His practice statement is: Honour the line and follow it through.
Share
The sun sets in the west as always but the street is awash in a flickering light. Debris idly floating by. A barely perceptible thump as a section of façade folds over and glides into the water. It’s all so effortless, this letting go of that which was solid, ordered and reliable; in this big water everything is brought to an equilibrium, made equal. Whether you float or sink is just a question of time.

The water is slowly encroaching on my space. First order of each day is to get out on the stoop and check the benchmarks. A wobbly drawing of a ladder on the wall, black slashes of coal. I make a new line for today’s level. The progress of the water has slowed down considerably since the first floods, but it keeps on rising at a steady, relentless pace. I have a day, perhaps two, before it’s too late. Everything here will be swept away. All accommodations in this part of the country are transient, prone to flooding, evacuated when needed. I have known this for some time. Everyone knows that. First it was a question of moving valuables out of harm’s way, simply shifting boxes and things up a shelf or two, hoping and thinking that the water would recede soon enough, that all would go back to normal, dry up and once again provide for its inhabitants. But it stayed under water. The rooms ceased to function. Dark reflections of slow eddies in the ceilings; passageways no longer passable, a submerged version of domestic life that turned furniture, doorhandles and kitchen counters into ghosts of their former selves; childlike pictograms slowly dissolving and drifting apart in wet entropy.

A high point on the island beckons in the distance. Somewhere down below are the train tracks and the highway that run parallel to where the shore used to be. The infrastructure is gone, buried under an impenetrable mass of muddy water. Faint, faint blue sparkles lit up the first nights as wires and junction boxes shorted out. Short-lived spectacles to herald a new era with sparkle and fizz for fanfare.

I go scavenging for plastic bottles, pieces of wood, rope, string – anything that will provide lift out of the water. When I was a kid we used to build makeshift rafts out of logs tied together with heavy ropes, but they always became too heavy, the wood getting waterlogged quickly, and the vessel more of a semi-sub than an upright raft. I think plastic bottles, oil drums, tyres. I need some kind of sheet for a sail. And a mast. A rudder. If I can get these things accomplished, I can set sail at daybreak.

ʻTengo que get the fuck out of aquíʼ was an art project I did in 2010 at Gnesta Konsthall, a small independent exhibition space just south of Stockholm. I had been invited by Niclas Zander, curator and artistic director of the venue, to do whatever it is that I do when I get an open invitation to participate. In retrospect, my attempt with the raft was a first step in a series of works that have a deeply personal therapeutic value for me; they help me, in their haphazard and sometimes erratic ways, to come to terms with a feeling of imminent collapse of the world as I know it. 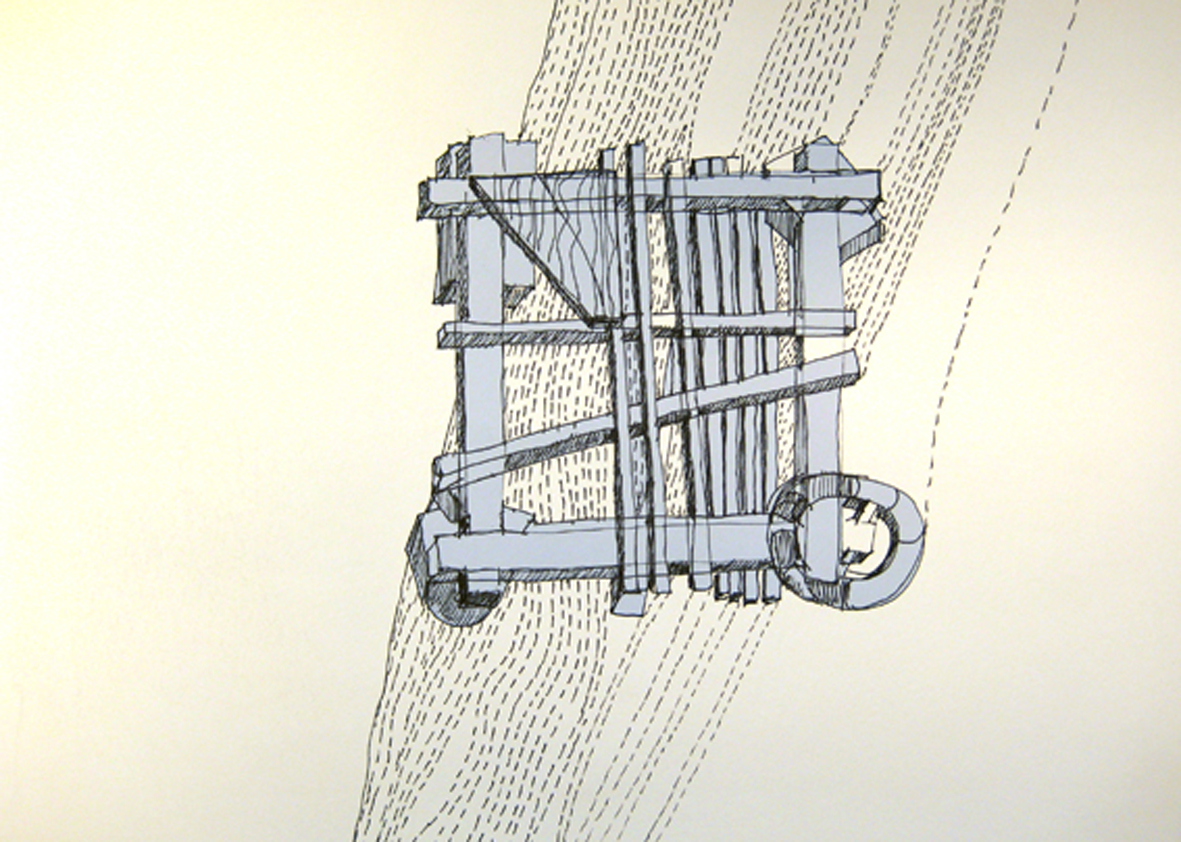 Rafts first came to my attention when living in the south of Spain. Our house was on the coast in the mountains and on clear days you could just make out the faint blue Atlas ridge across the water. News of immigrants attempting the passage filled the papers. Theirs was a treacherous journey on overloaded boats and rafts followed by a dangerous trajectory through a fenced-off Europe in search for work and a better life – for the lucky few that made it over. Sometimes I would run into small groups of immigrants on small dirt roads high up in the mountains. They would ask for water and directions. Encounters of dumb luck and blind faith. To build a raft out of necessity is not the same thing as building a raft for pleasure or art, but the notion came to me to do it as an as an exercise, to gain an understanding – and to prepare for a situation which although not presently real, very well may become a reality in a not-too-distant future. An attempt at empathy and compassion. An attempt at translating hyperbolic headlines of social, environmental and personal disaster into physical experience; to establish a viable connection.

In the end there was a raft that made a journey from work of art to child’s toy by way of a stint as an imagined rescue vessel. The raft itself contained within it several more stories – tales of waste and prosperity, of a society beset by affluenza and greed, of good intentions and pastoral landscapes. My scavenging for materials took me way beyond the area I had originally allotted myself and led to an interesting exchange of ideas – the fictitious situation of my need to build a raft made real by the practicalities of freezing cold water and a local history of floods. An official at the local water treatment plant was most helpful and gave me a bunch of discarded plastic containers used for hydrochloric acid. A piece of old tarpaulin made a good sail. My attempt was followed by an audience of onlookers at the shore, parents patiently waiting for the wind to pick up and their kids increasingly eager to see the man in the suit out there fall into the water – ʻCan he swim, Mum?ʼ 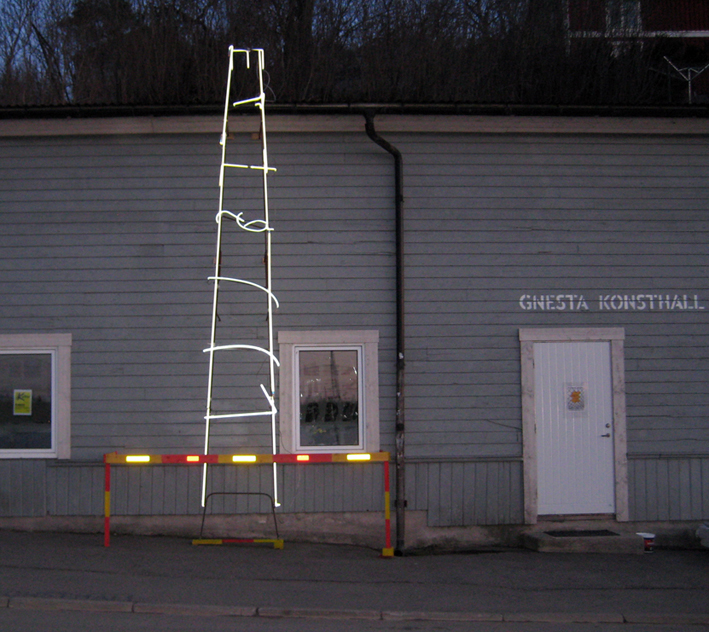