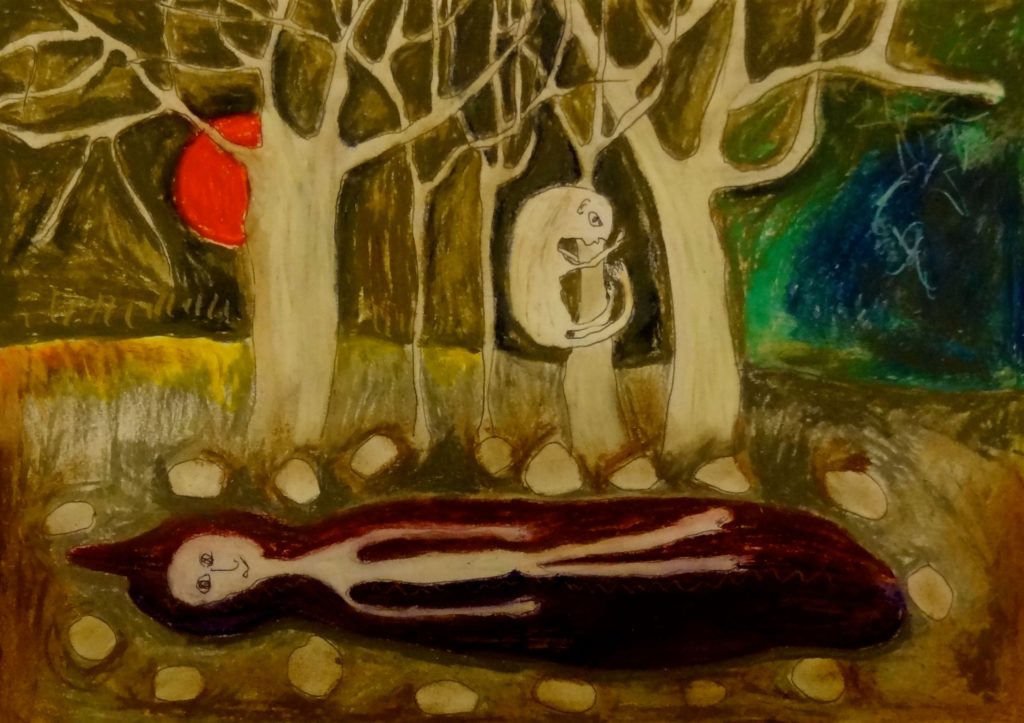 Painting by Em Strang
Dougie Strang
is a writer, performer, and storyteller. He sits on the Dark Mountain Steering Group and has co-created and directed many of Dark Mountain’s on site performances, including Liminal (at Uncivilisation Festival) and The Night Breathes Us In (Festival of the Dark, Reading). He lives in South West Scotland by the River Ae.
Share

The boy is nine years old and he’s playing down the burn, a stream that runs at the end of his street – the frontier of a housing estate that bulges at the edge of Glasgow. Beyond the burn are fields and then the deer woods, and beyond them, the moors, stretching north to Loch Lomond.

The burn runs through a wooded gully, mostly hawthorn and sycamore, a few oaks. He’s there with the other boys from his street. They’re out of sight and earshot of their parents and they’re playing Dead Man’s Fall.

The oldest boy is stationed at the foot of a steep bank, the rest line up at the top, nervous. They choose the instrument of their death: machine gun or arrows, grenades, a big spear. The oldest boy mimics the firing and throwing of weapons, and they fall, tumbling down the bank to lie prone at his feet. Whoever is judged to have died the best death is selected to join him.

Come rest your head on my knee
And I will play you harp music
A harp on the fairest, fresh lap
The bluest eyes and the whitest jaw

The boy is twelve years old when his dad leaves home. He doesn’t see him again for over a decade. His mum doesn’t cope very well after the divorce. When anyone asks him how he is, he says he’s fine. The day after his dad leaves, he crosses the burn and walks to the deer woods. He digs a small hole and buries the pen-knife his dad had previously given him.

A harp on the fairest, fresh lap
The bluest eyes and the whitest jaw
He fell into a quiet dreamland
Having traversed the wild oceans

The boy is fifteen and has discovered rock climbing. His climbing partner is a year older, soon bound for the army. They cycle to the Whangie at weekends, a popular spot for Glasgow climbers in an era before indoor climbing walls.

The story goes that the Devil was late for a meeting with a coven of witches on the Stockie Muir, and as he raced around Auchineden Hill, his tail cut a deep gash in it. The result is spectacular: a cleft that narrows almost to a tunnel and widens out to high crags at either end.

Their equipment is basic: a rope, slings, a handful of carabiners. As they’re preparing for their first climb, an old man appears out of the shadows of the cleft. He’s wearing tweeds and brogues and says ‘You’re going to have a fall today,’ before walking back into the cleft.

They’ve finished climbing their first route and the boy has abseiled back down to the bottom. His partner begins his decent. The belay slips, he falls. The boy breaks his fall, not through an act of bravery but because he’s in the way. His partner is bigger and heavier.

When he regains consciousness, he is being carried down the hill. Others who were climbing nearby have fashioned a stretcher. His lower back feels like someone has driven a spear into it.

Later, after hospital, he’s recovering at home; strapped up in bed with a chip out of his spine that just missed piercing his central nervous system. His climbing partner visits, haunted by the appearance of the old man. ‘No-one else saw him,’ he says, again and again.

The boy is sixteen, standing with hundreds of others in the queue at the Motor Trade Training Centre. A tall boy standing next to him says that working in a Parts Department is less manky than working as a mechanic. It’s the only career advice he receives. He pays heed to the tall boy – he’s wearing a Joy Division t-shirt.

The garage is a brutal place. He’s there for four years, learning to be a man according to its specifications. He’s not very good at it. The oldest mechanic, upstairs on the shop floor, takes pity on him: ‘I wanted to work in the forestry when I was a kid. Imagine that, me, in some wee hut in the middle of nowhere, looking after fir trees.’ He’s serious. ‘Don’t be like me,’ he says.

At lunch the men cross the road to the pub, where they’re served re-heated pies and pints of heavy. The boy escapes to the park, eats his sandwich by the duck pond. On the island in the middle, he sees a heron, standing in the shade beneath the willow, its sleek head tucked into its chest. A grey ghost with one bright eye staring.

At night, lying in his bed in a flat off the Great Western Road, he imagines the heron, rising from the park, wings beating steady, beak stretched forward like the point of a compass, flying out and away from the city.

He spots an ad in the paper, ‘Help Wanted, on a small Hebridean Island’. He jumps and doesn’t fall.

We all have a story. I’ve shared some of mine to illustrate the truth that even in this modern, materialist world, a different world insists on intruding. A world of myth and ritual, and what the writer Paul Shepard describes as ‘beautiful and strange otherness’.|

Looking back, I see that our childhood game manifested a deep need for initiation that we could never have articulated. Likewise, I understand now that by burying my dad’s pen-knife, I was attempting a ritual that might hold my grief and help make sense of a situation that was overwhelming me.

As for the old man at the Whangie, I’m still baffled. I can only tell you that we both saw and heard him; and that when my scientific, rational self gets too inflated, I remember him in his tweeds and brogues, indistinct in the shadows; and I’m grateful that he makes no sense, that he brings his strange otherness to my story.

The lyrics punctuating the text are from Am Bron Binn, ‘The Sweet Sorrow’, a remarkable song from the Gaelic tradition of the Outer Hebrides and the far north of Scotland. An early tape recording of it was made in 1957 by the folklorist Hamish Henderson, while spending a summer in Sutherland, travelling with an extended family of Gaelic-speaking nomads. The Stewarts of Remarstaig were from a long lineage of ‘tinkers’ who tin-smithed and hawked their wares in the crofts and villages of the Highlands. Henderson describes his time with them as the high point of his life: ‘out on the road three-families strong, with horses, carts, with barefoot children and an old man telling Homeric, Ossianic tales – as though the Aegean were lovely as Loch Eriboll!’

The old man was Alexander Stewart – Ailidh Dall – the blind patriarch of the family and a master storyteller and piper. The first song he gave to be recorded was Am Bron Binn. It’s one of the oldest in Europe, taking us back to the 6th century.

After my own time in the Hebrides, after I began to gain a sense of who I was and what I wanted, I sat the necessary exams to go on to study folklore and mythology at the University in Edinburgh. A world opened to me. I began to understand that I’d grown up in a culture that was thin gruel in comparison to the rich feast that once would have been my birth right. I felt a sense of loss that was belly-deep.

Slowly, twenty-years slowly, I’ve searched for a way, not backwards, but towards – towards an appreciation of the old songs and stories; towards an understanding that so-called ‘archaic’ culture remains vital, in the sense of it still being alive and necessary. Francis Weller writes it beautifully in his book The Wild Edge of Sorrow: ‘We were meant to drop below the surface of things and to experience the depths of life in the same way that our deep-time ancestors did. Their lives were filled with story, ritual and circles of sharing. This is what the soul expected, what it is we need today.’

They walk through the bright streets and the bustle, to the edge of the city. There’s a crossing. They follow a path through woodland; the only lights, their lanterns. Something very old watches from the shadows beneath the trees. There’s silence and the opening of senses. At the hearth, a circle of faces in firelight. He opens his mouth and finds the words. 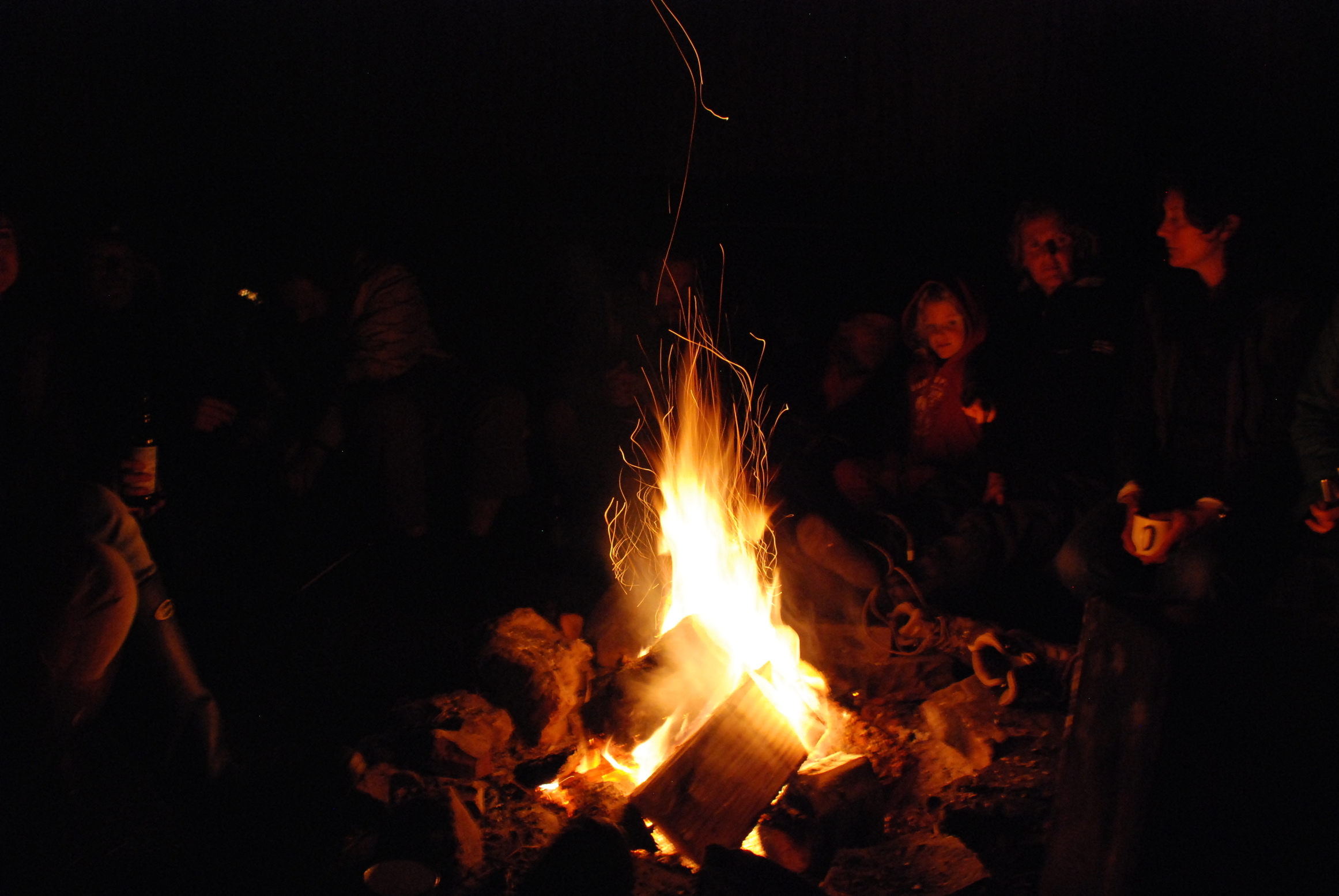 On the 25th of March the Dark Mountain project presents The Night Breathes Us In as part of Reading’s year-long Festival of the Dark. This unique event will celebrate the Spring Equinox with a combination of workshops and performance: a participative journey of story, song and fire.

At a time when winter is ending and spring has begun, we will look at our relationship to the seasonal shifts of the year, and to the deeper flow of both circular and linear time. We will explore the play of light and dark as expressed in the stories and myths that enrich our lives.

Throughout the afternoon there will be a full programme of talks and workshops. In the evening, as the light fades, we will take your hand and lead you on a lantern-lit procession, a waymarked route of shadowed installations and performance, to a secret location where we’ll share stories, music, poetry, and the warmth of a good fire; we’ll celebrate the dark and the community of people that has gathered; we’ll let the night breathe us in.

Go here for information on the programme and ticket sales 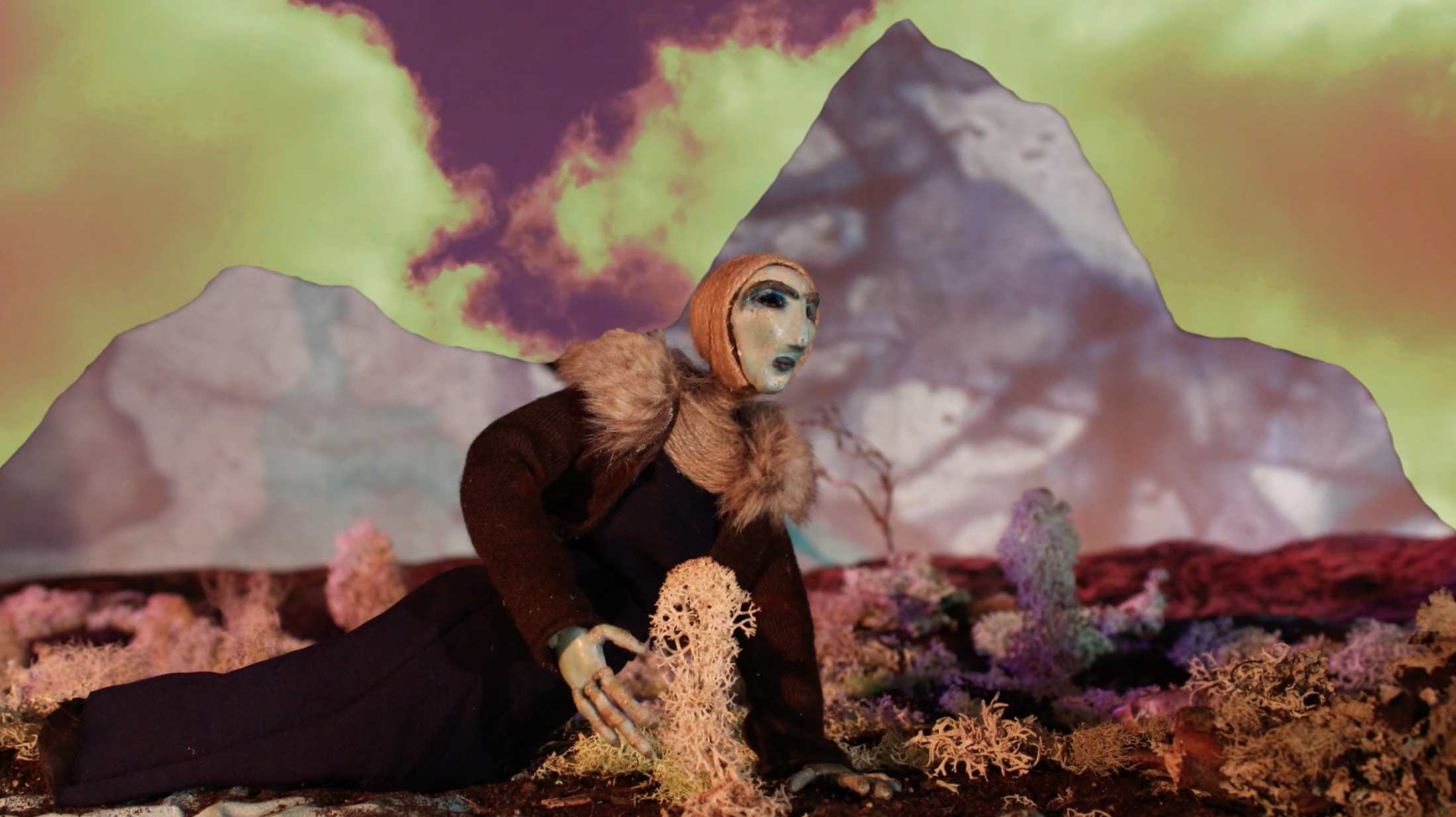 Waiting in the Dark

Jonny Randall
A response to our call for uncivilised short films: film editor Jonny Randall gives an overview of some of the work that was submitted.
Call outsUncivilised Arts 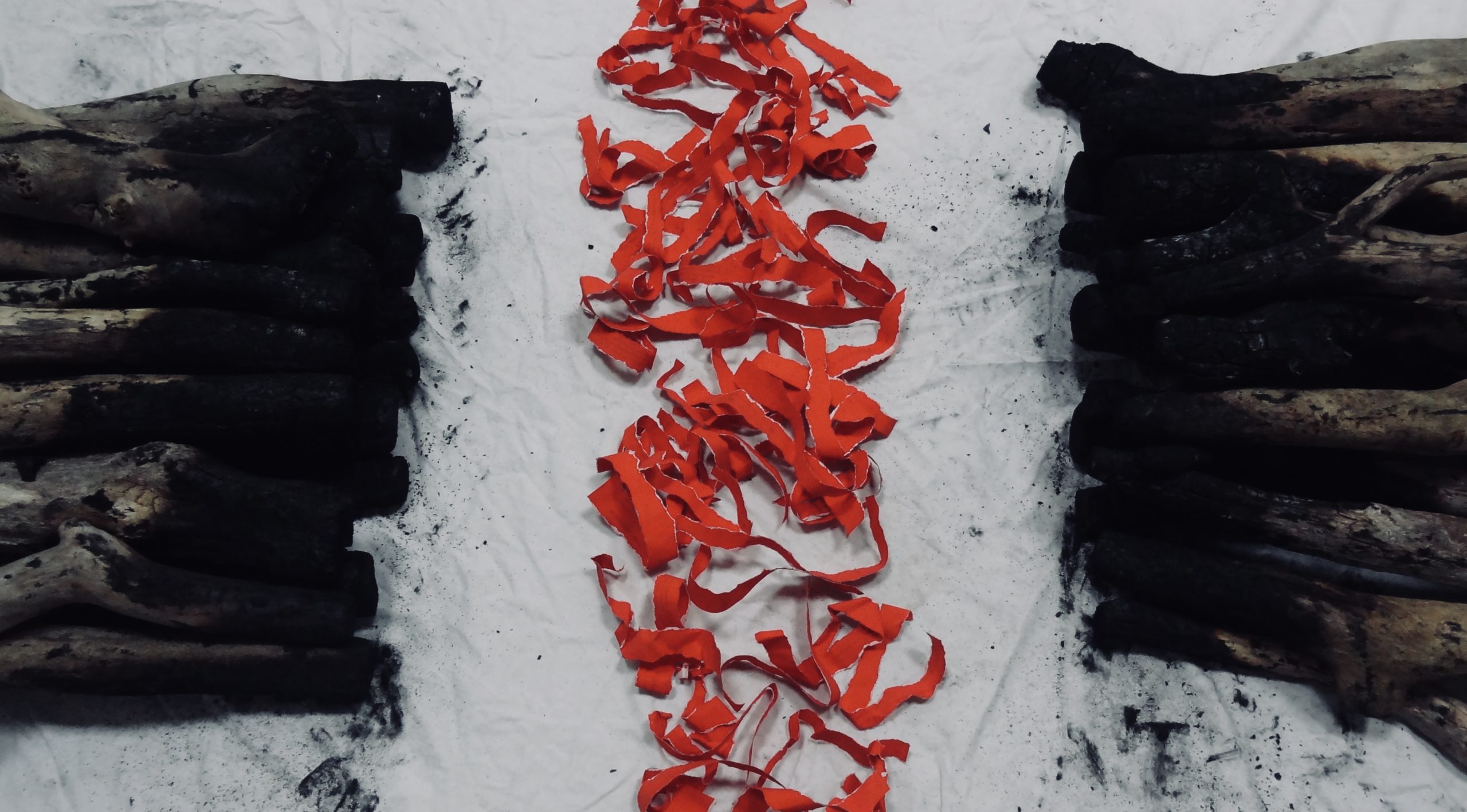 When the Show Can’t Go On 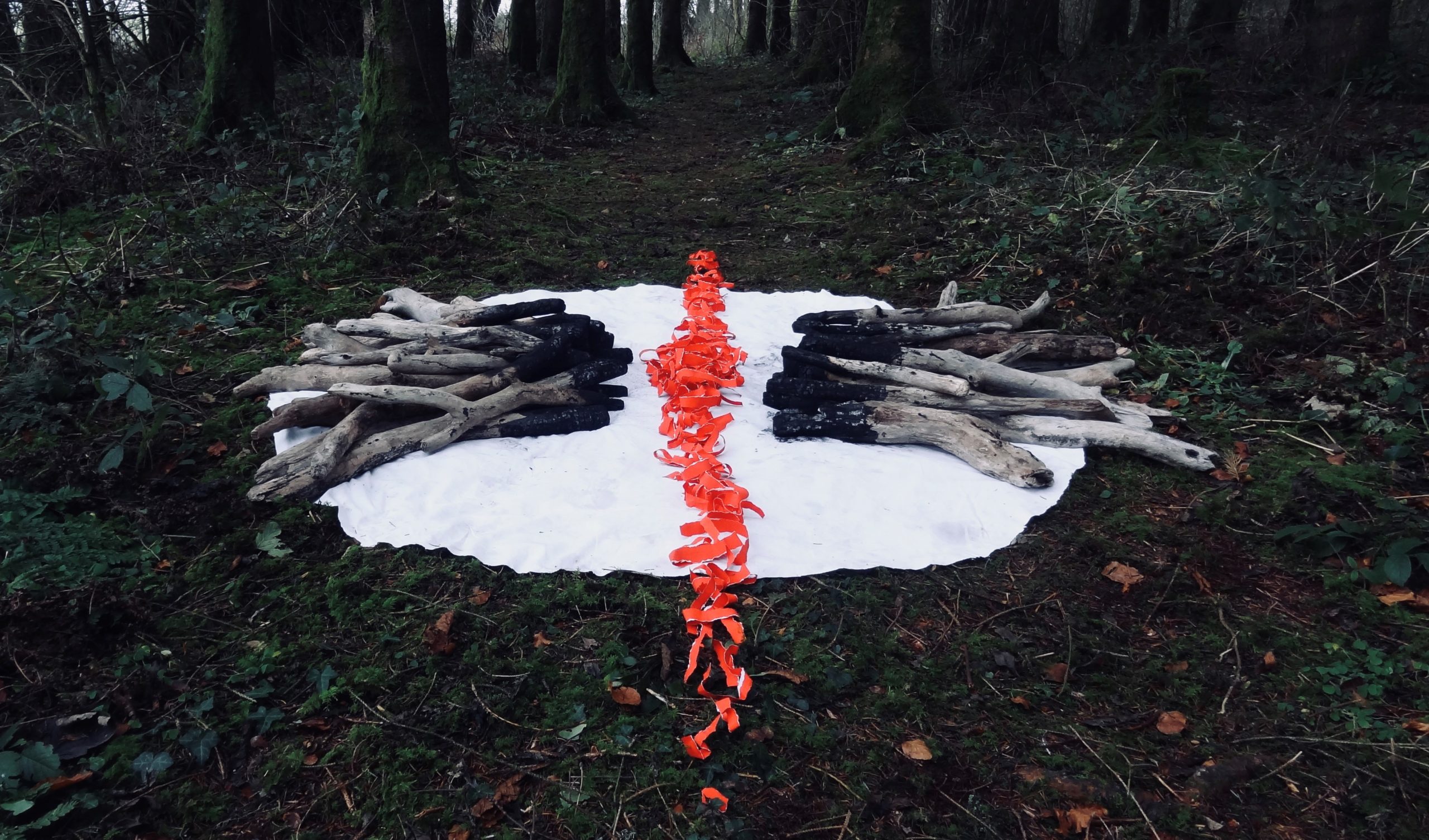 How We Walk Through the Fire

The Dark Mountain Project
Join us this spring for a weekend of talks, discussions, performances, workshops and other happenings – and the launch of Issue 17.
On GatheringUncivilised Arts 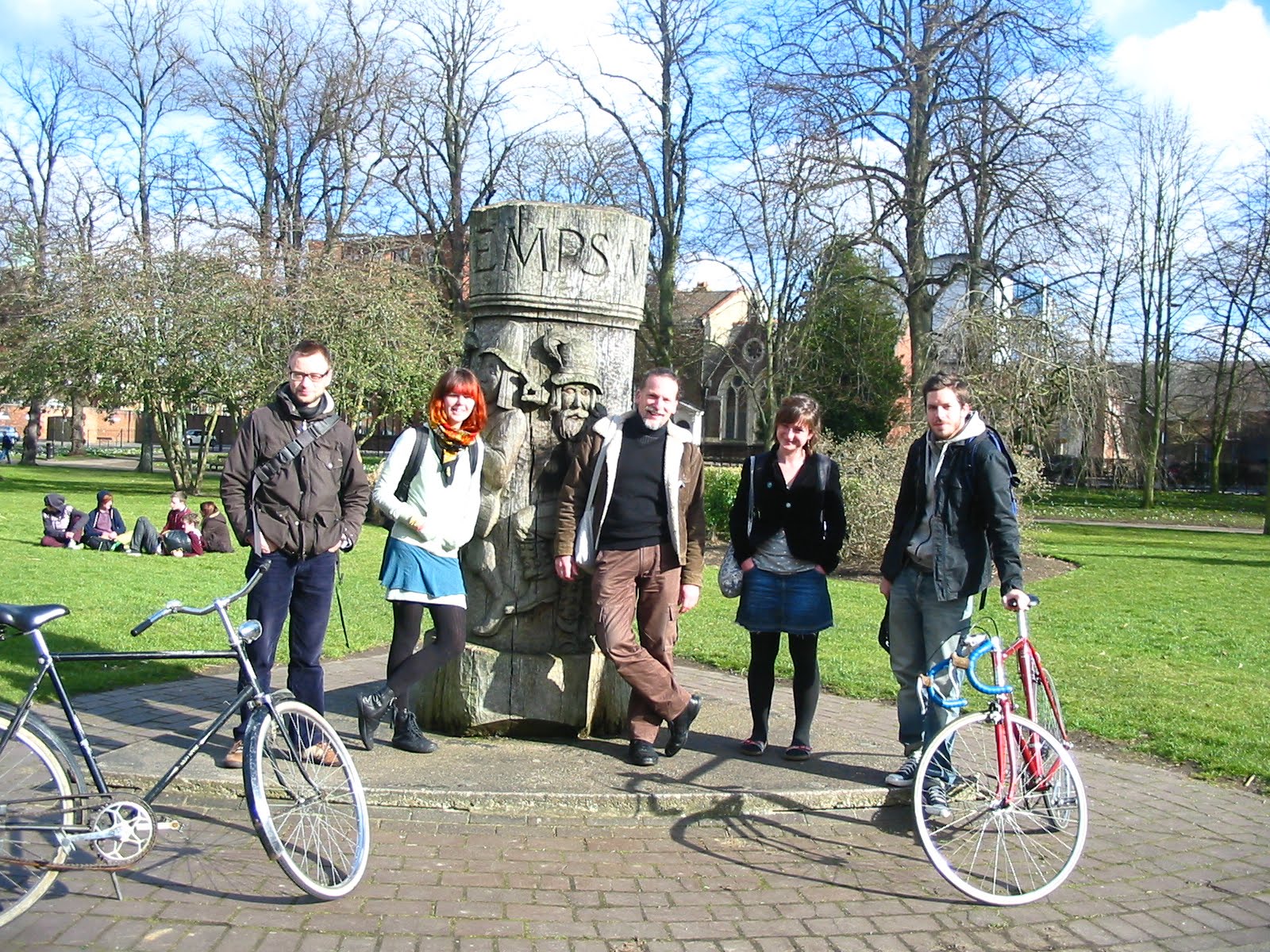 Find the Others: Jeppe Graugaard and the Dark Marshes

Ava Osbiston
First in a series of podcasts for our new Find the Others section. Ava Osbiston interviews Jeppe Graugaard.
Find The Others