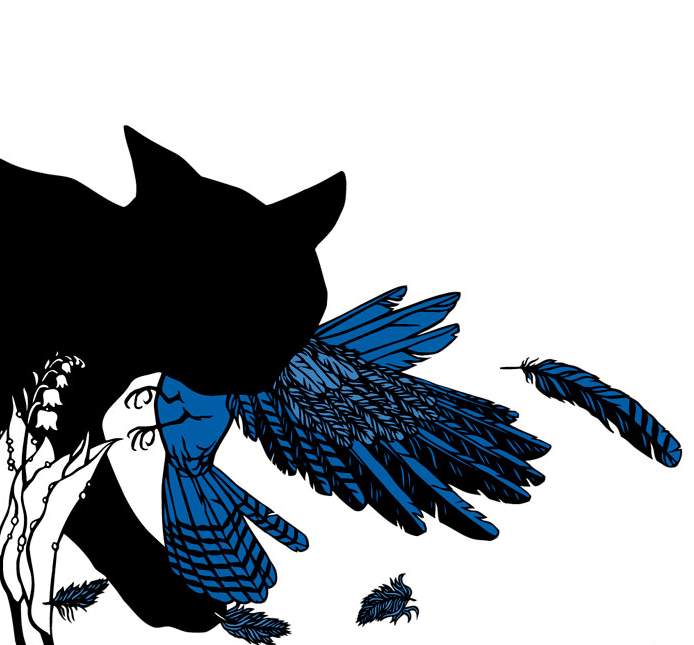 'Witness' by Nikki McClure
Persephone Pearl
set up Feral Theatre with her best friends in 2007 and has been making performance work about ecological change since then. Her background is variously as a drama teacher, puppeteer and aerial circus artist.
Share
It’s getting late.

She is half-heartedly washing up when the cat comes through the catflap into the kitchen.

A small furry shape dangles from his mouth. He has this awful habit of carrying them by the head. He puts it down, and the woman shoos him away and picks it up. A short-tailed field vole. Its eyes are open, it is warm and soft. It is beautiful. It does not look damaged. She brings her hand close to her face and squints at the little thing lying on her palm. Standing as still as she can, she tries to feel if its heart is beating, or if there is breath or twitch. For a moment she is still enough to listen to its body with her skin. But she can discern no pulse.

Maybe it is in a coma. Do voles go into comas? She imagines for a moment the sort of resuscitation she could do to rouse it, and giggles despite herself. Turning it over, she strokes its belly and notices its tiny teats. The woman herself has just scored positive on a pregnancy test and wonders if there are doomed babies somewhere nearby in a burrow.

The woman puts on her boots to take it outside. But slowly. She realises she is stalling: she wants to keep the vole indoors in a box lined with cotton wool, just in case it wakes up. She would like to meet it properly.

1985. Twelve years old. Home from school, on a damp November night. She notices that Hammy hasn’t moved since she peeped at him this morning. Dread-filled, yet already knowing the truth, she opens the hamster’s house and lifts its small cold body from the bedding. She strokes it, bringing it close to her face, looking minutely at the front teeth and whiskers, wanting somehow to memorise all its details before it has to go into the flowerbed tomorrow. She shudders at the thought of soil on fur, and the microbes going about their work. Reluctantly she puts Hammy into a shoebox lined with toilet paper.

2005. The woman’s son is a month old, and she is enchanted by him. He is the most extraordinary thing she has ever seen. One day she notices the whorl of his dark hair as it spirals outward from a place on the crown of his head. No-one else has ever noticed this detail, she realises. It is a brand new phenomenon. Paying attention to the tiniest details of her new child is her job alone. This whorl of hair is a universe in itself, it seems to her, and then and there she etches it permanently into her consciousness.

Now she touches the vole’s ear, which has been squashed: she unfolds it and smooths it back into place. It is very delicate, like one of those tiny cup fungi that stand up from the leaf litter in the woods on damp mornings. Furtively she looks into the vole’s eyes, trying to discern a response, before gently closing them. An image of earth falling onto the glistening cornea surfaces and bothers her.

The cat manages to catch these creatures in the darkness, yet the woman never sees them alive. He is her connection to them. She envies him his relationship with the moist woodland by the house. She wishes she could get inside his skin and sense the world as he does. Killing, for the cat, is nature – whereas the woman has been a vegetarian since childhood. She hates the killing. The little birds are the worst. They fight until they are half-eaten. But, since it was she who bought him as a kitten and brought him here, she is complicit in every one of his murders. The cat is her surrogate wild side.

She rouses herself to take the vole outside. The stars are brilliant, but with no moon visible the night is utterly black. She stumbles, clumsy and slow, over to the trees, and drops the vole gently into the undergrowth. Turning back to the house she sees the cat silhouetted against the glass kitchen door, as he trots out into the night again.